Indeed 2019 has been a good year for South African designer Thebe Magugu. From winning the 2019 LVMH price to producing a capsule collection on Paris leading e-commerce website 24 Sèvres, the fast-rising creative genius is definitely putting the African fashion industry on the world map. 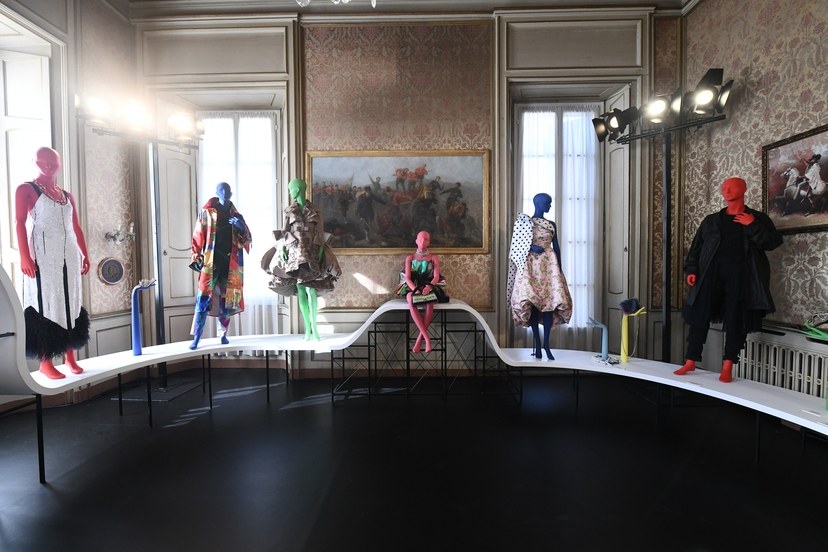 Thebe Magugu was part of the Vogue Talents ten-year anniversary exhibition. Along with over 70 designers from different parts of the world (including Nigeria’s Orange Culture) he got to showcase his collection from the 19th of September at Palazzo Cusani in Milan.

The programme run by Italian Vogue during the Milan Fashion Week, is a platform that gives young designers at the start of their career a boost into the world of fashion. Italian Vogue says that with the project they have been able to shine their spotlight on young talent that has gone on to become leaders in the game.

In this last decade, the world has completely changed – nowadays everyone needs to think in a more responsible way. VT was conceived to support the new generation of creatives at a time when few believed in them. There were not so many contests and no media was focusing on, or particularly interested in, what the new generation had to offer. A platform with no boundaries, VT has scouted and spotlighted many designers at the beginning of their career who are today transforming and evolving the fashion scene. Passion is in the DNA of VT. It travels constantly all over the world, listening, watching and discovering stories, visions and dreams – not just of designers – and giving them a chance to be seen on the global stage of fashion. We’ve been to places such as Africa, the Middle East, India and many other regions where nobody would have expected to find budding creativity. Yet talent is everywhere, it knows no borders, and our scouting never stops because many promising names lack the tools and opportunities to catch the fashion industry’s attention. This issue of VT is a celebration of what has been achieved in the last decade. On these pages we give voice to the people who have always supported the new generations, illustrating success stories as well as fostering today’s emerging talents. The first 10 years of VT will also be celebrated with a special exhibition at Palazzo Cusani in Milan, open on 20 and 21 September during Fashion Week. The display will include the creations of the designers who have featured in this grand scouting initiative over the years. VT is a big lab where young creatives are nurtured but also put in contact with the industry and brands, so they can gain experience and take their own fledgeling labels to a higher level. VT is evolving every day and in the last year, responsibility has become our goal. We must promote awareness of sustainability in the new generations and inspire them to move in this direction. We wish to thank everyone who has believed in this project and believes in the new generation. BE BOLD, BELIEVE IN YOUR VISION AND NEVER THINK IT IS IMPOSSIBLE.

Sara Sozzani Maino, the Head of Vogue Talents and Vice President Italian Vogue says that the initiative was created to give opportunity to budding designers all over the world.

It was born thanks to the vision of Franca Sozzani (former Italian Vogue’s editor in chief) and my passion to support the new generation of creatives. We wanted to give concrete support to those who had talent but not the means to prove it. In these ten years, the team has dedicated enthusiasm and energy to enhancing the talents coming from all over the world.

Ten years to browse through portfolios, to visit universities and fashion academies around the world, to enter showrooms and ateliers – from the most popular to the smallest – ten years of journeys between the most remote or less fashion week discounted. In these ten years we have taken part in juries of important competitions, promoted scholarships, suggested through all our channels the protagonists of the future all over the world. Ten years without ever giving up research and supporting talent.

Emanuele Farneti, the director of Italian Vogue adds that Vogue Talents gives young designers a platform to realise their dreams.

To start a successful career in fashion, creatives are called to design their opportunity with dedication, commitment and courage. A reality like Vogue Italia has the task of offering the visibility needed for designers to take flight, to them the duty to believe in themselves and commit every energy to realize their dream.

Thebe Magugu also got to showcase at the Spring/Summer 2020 Milan Fashion Week.

Kickstart Your 2019 Style With the Shopbop Sale – We Promise You’ll Love It!