After a long summer break, the fashion fam was back in force for Lagos Fashion Week 2018.

As with any community, much less a creative one, expectations were high to see what Day One of the runway shows would offer with an intriguing combination of new and more established names on the schedule. Ever the nerd, I had done some minor Instagram stalking to get an idea of what to expect, but then I stopped myself as it’s far more exciting to actually sit, see and fully experience what the designer’s vision is for what should be in our closets in the not too distant future. 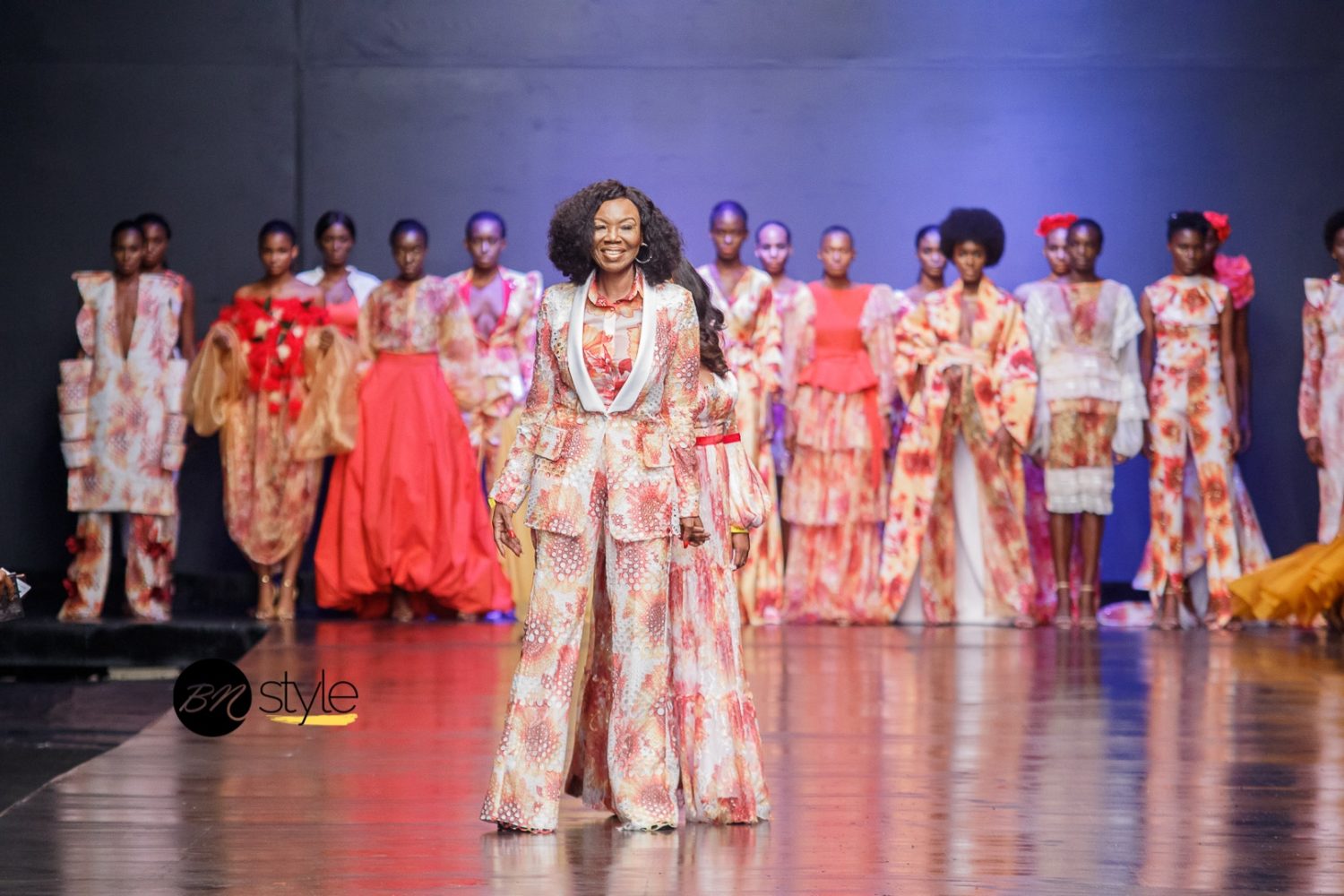 Betty Irabor requires no introduction; as the owner and founder of Genevieve Magazine, a pioneering publication that has done much to alter the fashion landscape in Nigeria, her foray into presenting a collection seemed organic. Entitled “The Dew Collection” it was a collaboration with a host of brands including Mai Atafo, Style Temple and Needlepoint with an aim of promoting awareness on Mental Health. Rather evocatively of brighter tomorrows, the designers chose to use a sunshine palette of saffron, tangerine and white print with pieces that for the most part leant strongly to occasion wear including a number of red carpet ready gowns. It will be interesting to see how the brand develops but judging from the applause as she took her bow to Gloria Gaynor’s classic ‘I Will Survive’, popularity and expanding the conversations around mental health is guaranteed.

For the two Fashion Focus designers Russell Solomon and Cynthia Abila Studio, it was a case of collections that offered some golden nuggets that were somewhat obscured by pieces that could have benefited from a more judicious edit. Solomon, offered a unisex collection, with a series of transparent PVC panelled-blouson jackets and coats being especially strong.

For Abila, the occasion-wear heavy collection (if only all we did was go to owambes and functions huh?!) didn’t quite ignite to the heights that a soundtrack of Michael Jackson’s ‘Thriller’ and a video entitled “Celebration of Women” would imply, but if you were in search of a changing gown post-wedding day there was plenty to pick from. A new name to not only watch but to buy now, before the wahala of getting pieces when you want them gets too much is Lagos Space Project. Every fashion capital needs one: that designer that fuses intellectualism and culture to create pieces that are not only conversation starters but conclusions in and of themselves. Creative Director Adeju Thompson was entitled ‘Project 3.1 AWO-WORKWEAR’ and he took as his starting premise what a modern-day Babalawo might need to go about his business. In turn, we were treated to high waisted drawstring trousers with voluminous legs, overalls that were given a knife precision finish, long line tunics with outsize pockets that would render a handbag entirely optional rather than necessary and wrap adiire skirts with white shirts worn very insouciantly by both men and women. Granted, some customers might be put off from the lack of overt sexiness from the pieces, but to offer an alternative way of dressing in a tide of Slay Queen-age and Fine-Boy-No-Pimple saturation was refreshing, to say the least. 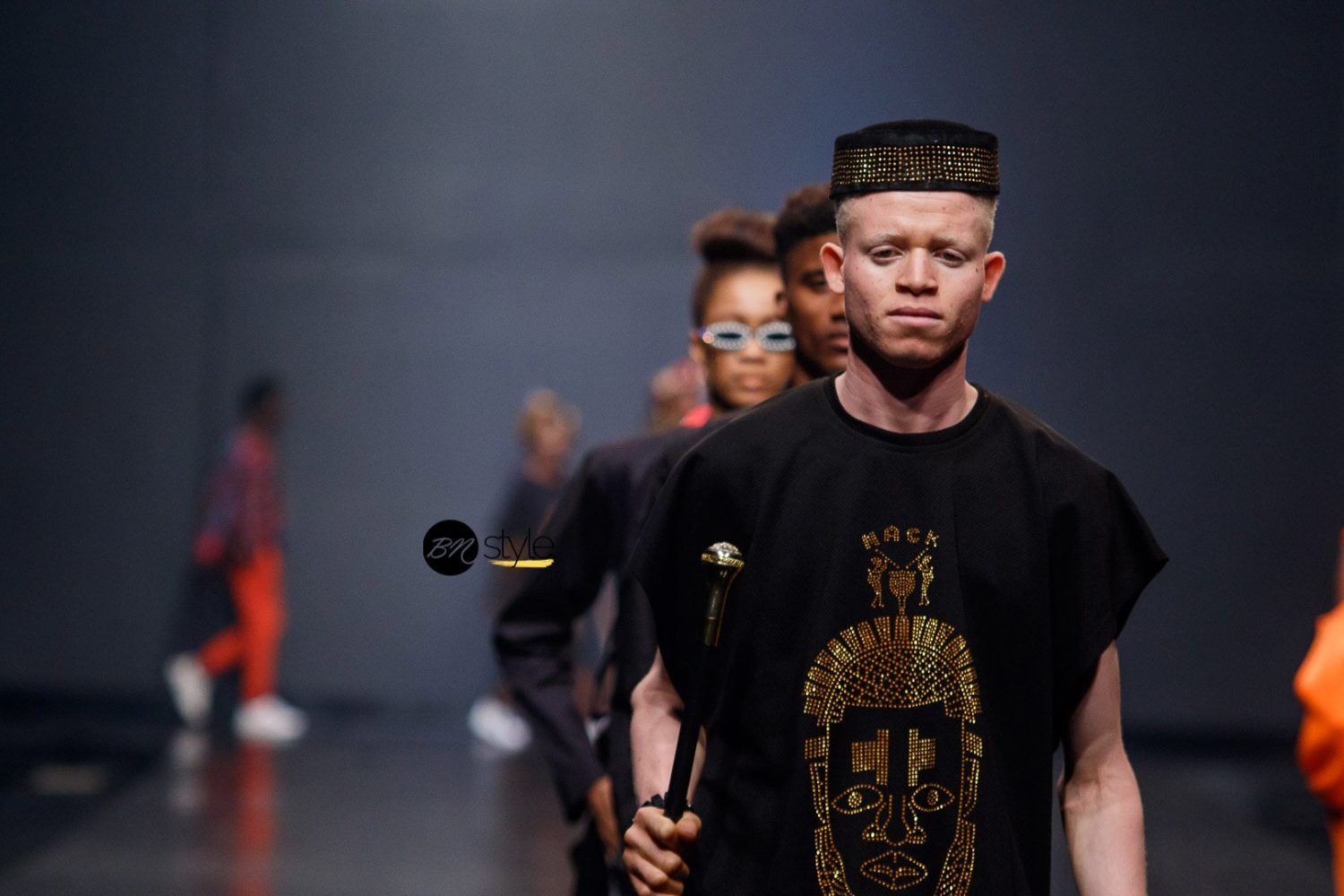 NACK might well already be all over your Instagram feed right about now, judging by how many phones were held aloft to capture the show opener of a trio of athleisured to the bone models in green t’s with ‘Nigeria’ emblazoned on them, and what followed were further iterations of easy pieces that will up the ante on Netflix and Chill days. 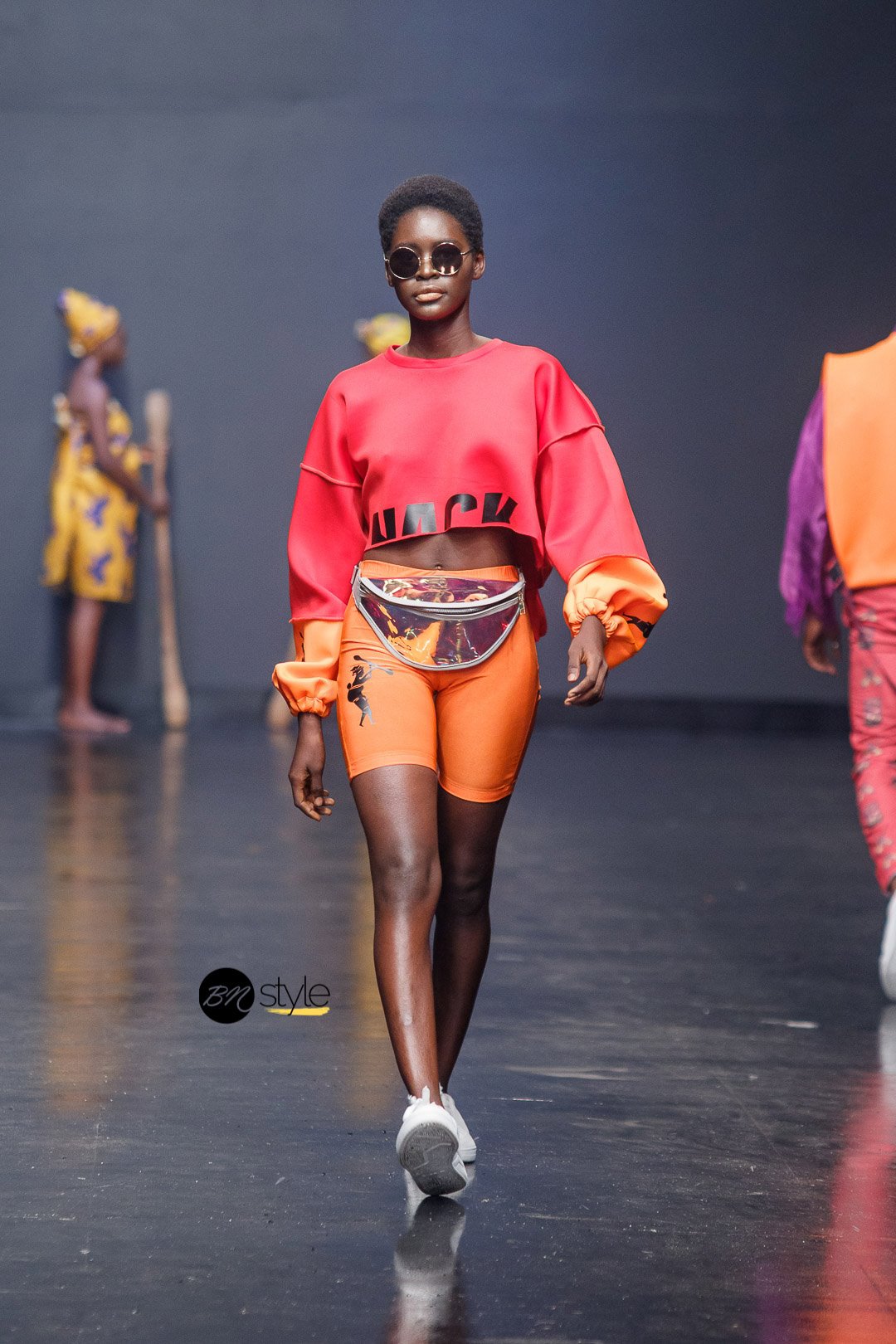 As any global athleisure brand worth their salt knows, your insignia is your calling card and NACK, which stands for Nigerian Articulate Culture Kullection has certainly achieved this with its beaded Benin Bronze motif which appeared on t’s pants and jackets. Expect more cool kids to flock to this home-grown riposte to global megabrands.

Kiki Kamanu’s collection was entitled ‘Sisi Eko’ and was a love-letter to the women of Lagos, although this being Kiki it was the women of Lagos who are as fearless and expressive as the eponymous designer. Silhouettes varied from body-skimming to trapeze for dresses and slimline to drop crotch harem shaped for pants, a touch that thankfully made participating in the Kiki Kamanu aesthetic not dependent on body shape or size. 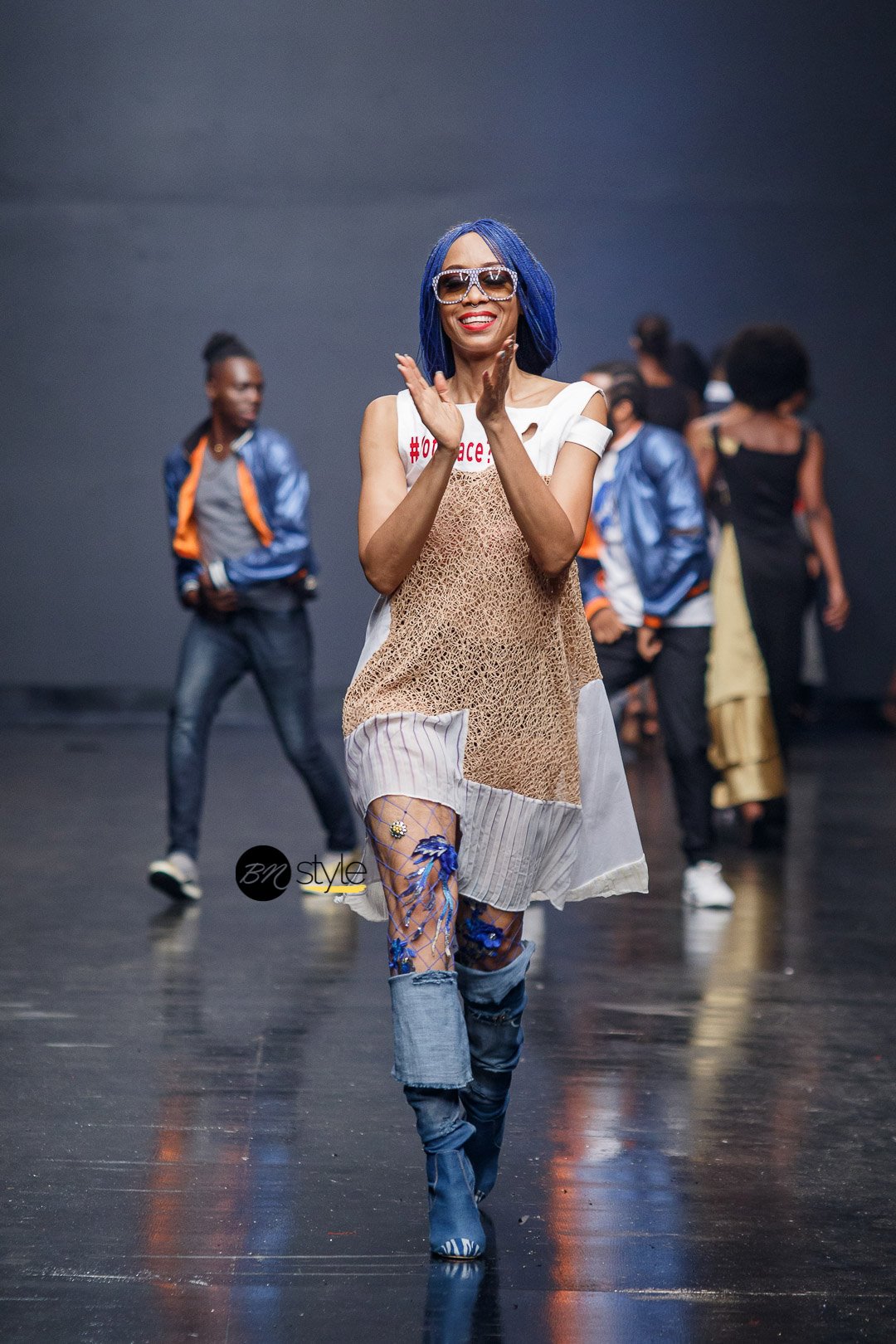 Slogans on pieces is nothing new to the designer who gave us the ‘Pepperdem’ dress, but this season as well as a return to the evergreen ‘LoveLagos’ hooded maxi-dress we also had a cheeky top with ‘Take
What You Need…’ with an assortment of options. As always there were accessories aplenty including large trapezium fringed tote bags that are sure to be a hit. The former runway model took her signature walk to Drake’s megahit ‘Kiki’ and yes, the crowd definitely still loves her.

Anyango Mpinga was new to the roster but definitely made an impact with an assured collection, a series of white lace dresses opened a show and if you are an existing Self-Portrait fan, you would have found more to lust after and purchase. Pretty prints were most definitely a thing with an asymmetric free shaped frilled dress garnering a flutter of applause as it made its way down the runway. 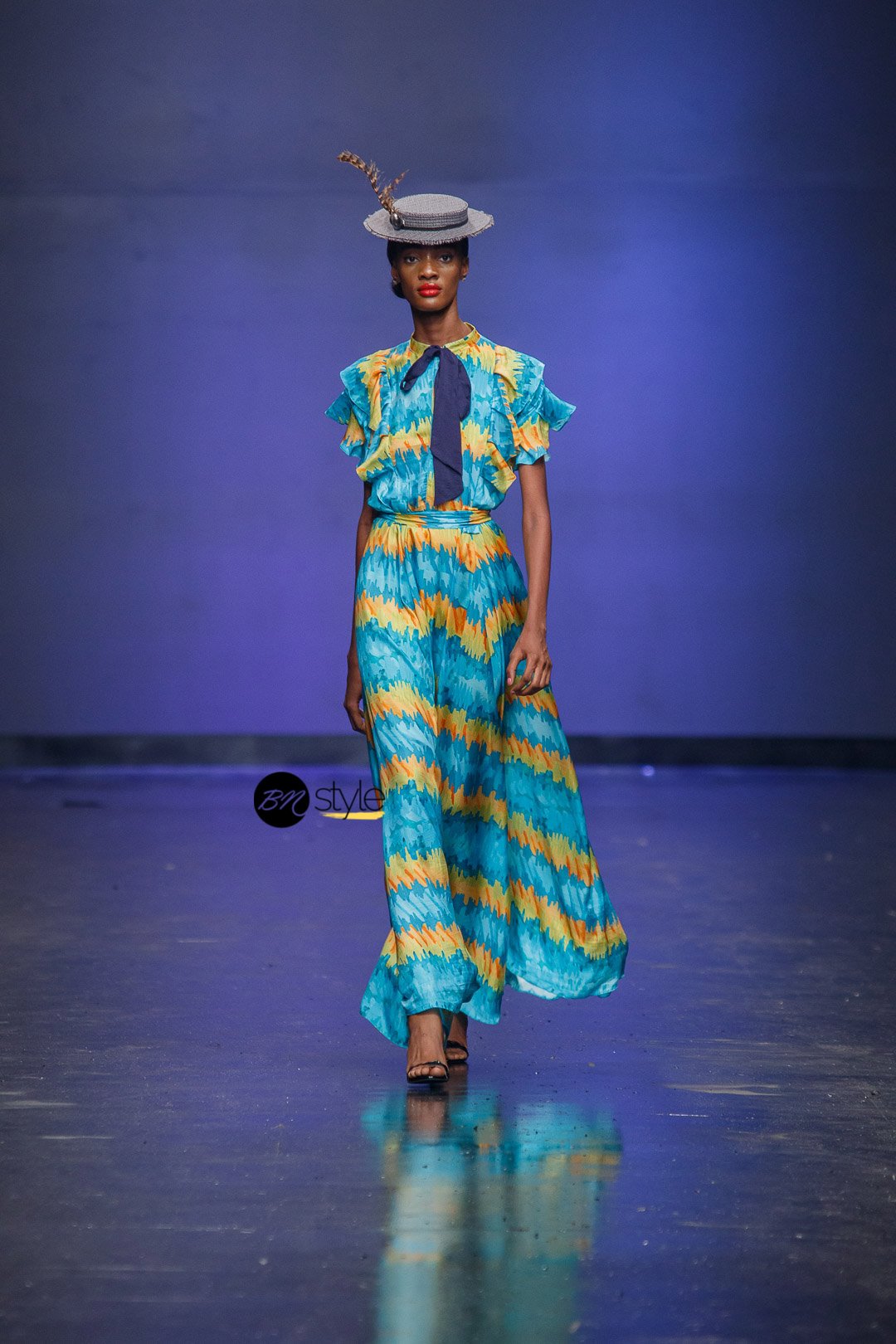 Equally well received were a series of red silk bird printed dresses with text that had ‘love’, ‘freedom’ and other positive words adorned to replicate newspaper headlines. Styling details such as the straw hats worn at a jaunty may have divided the crowd, but they spoke to a designer who possesses clarity of voice.

DNA by Iconic Invanity was like a football match, a game of two halves. First up was Neka Youth, a collection designed by the youngest member of this family dynasty of three female designers.

She clearly has a finger on the pulse of what young women want to wear right now and her confident debut included adiire jumpsuits, tie-dye playsuits and just ‘throw- and-go’ dresses paired with sneakers.In short, the go-to uniform for ‘doing you’ that resonates with modern young women. With DNA Iconic Invanity, elder sister Destiny continued the brand’s central premise of beaded body-conscious gowns that will have eyes locked on you, with palette being the only clear change of direction. The saying goes ‘if it ain’t broke why fix it’ and judging by the existing DNA army in the audience, they will return for second helpings this season. Maxivive is definitely the Marmite of the Lagos Fashion scene with as many who love as those who dislike Papa Oyeyemi’s work, but that is oftentimes the price you pay for the singularity of vision. The Collection entitled ‘How to Marry A Billionaire’ opened with some ‘look away now those of delicate dispositions’ slogan sweaters, t’s and pants, a collaboration he has created with Funmi Fagbemi. 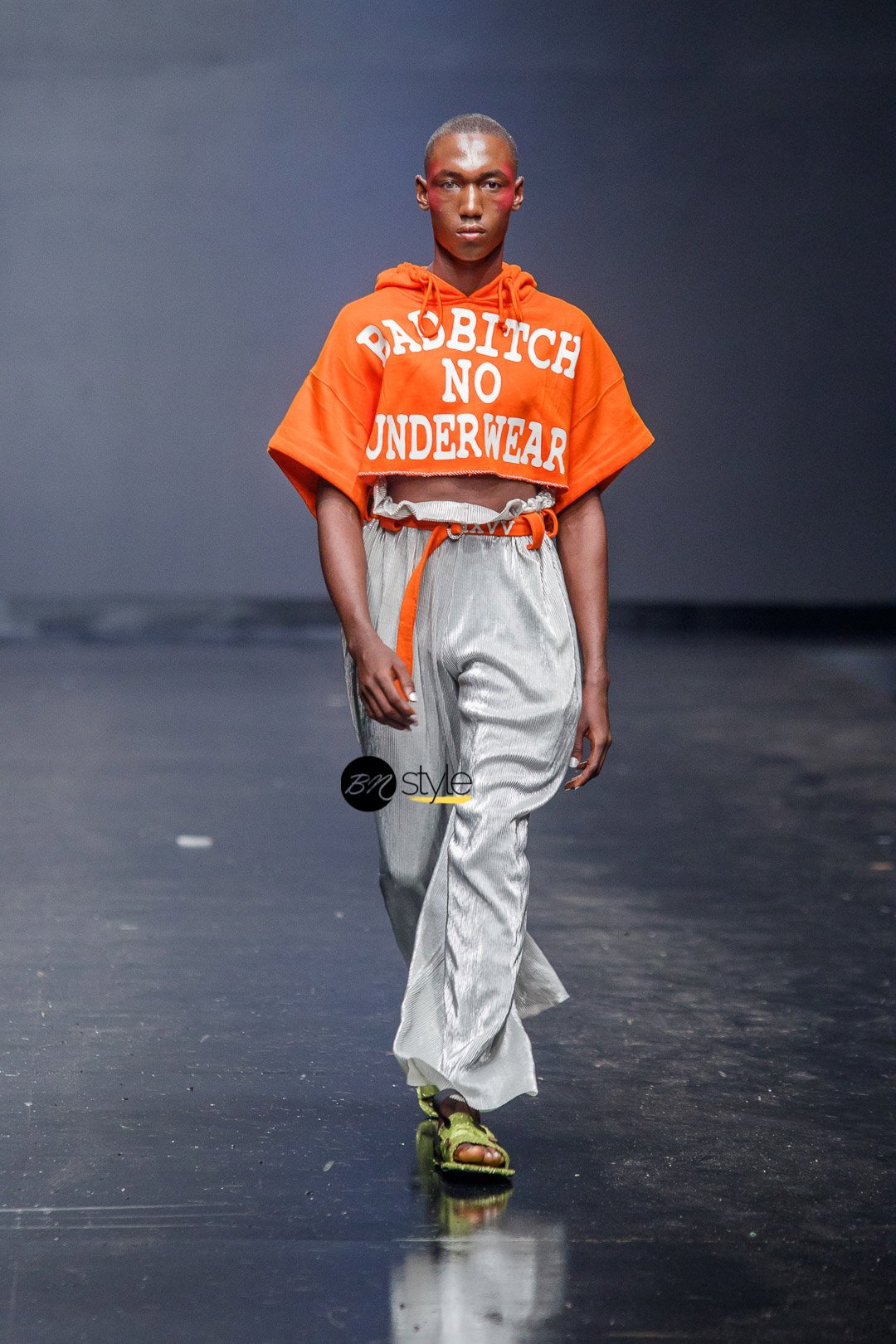 Some might say completely obscene, others will counter merely provocative. And indeed, the notion of using your more carnal charms to get what you want, whether it be a partner who can lend you the Private Jet for a quick shopping run in Paris, or for people to see and desire the real you were present in all of the pieces. Lurex, sequins and iridescent finishes indicated a continuation of the ‘Glistening’ theme explored in the previous collection, and the palette was as broad as one’s tastes or orientation may be. In the midst of the show flourishes including an unconventional bride and groom closer, were pieces that Maxivive is known for, with knitwear, shirts and trousers that were covetable and simultaneously spoke to the genderless agenda that is being championed globally. 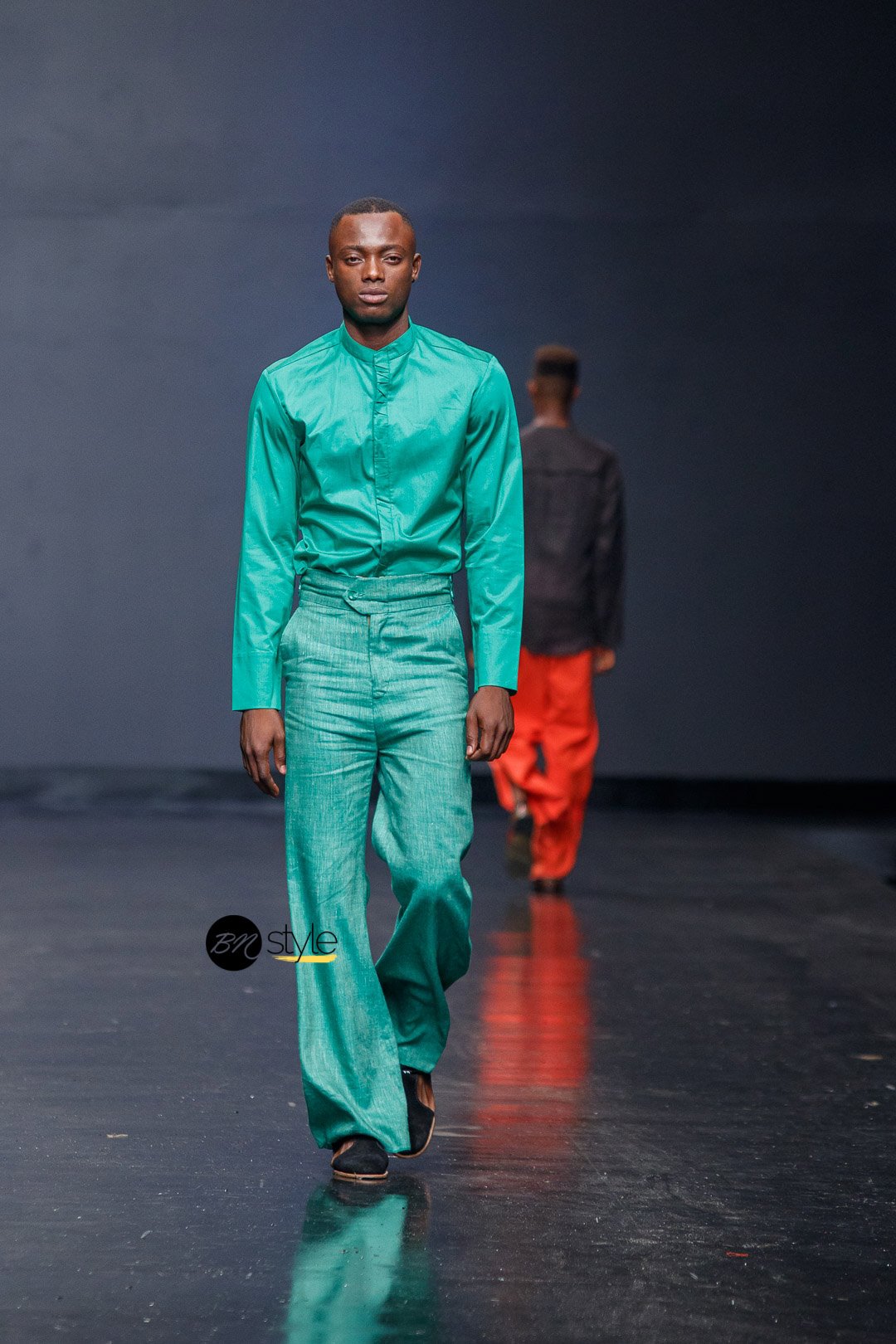 Closing Day One was Kelechi Odu. Full disclosure; the designer is a close member of my family. However, like a child at Christmas who doesn’t unwrap presents early even when you know where they are hidden, I was as surprised and delighted as those who persevered with the crazy-have-to-have-been-there-to-believe-it late commencement of the programme itself; a situation that had a knock-on effect for all who showed, especially the designers later on in the schedule, who were seen only by hardcore to the death fashion lovers, family and friends or those who are partial to driving the streets of Lagos post-midnight on a weekday. 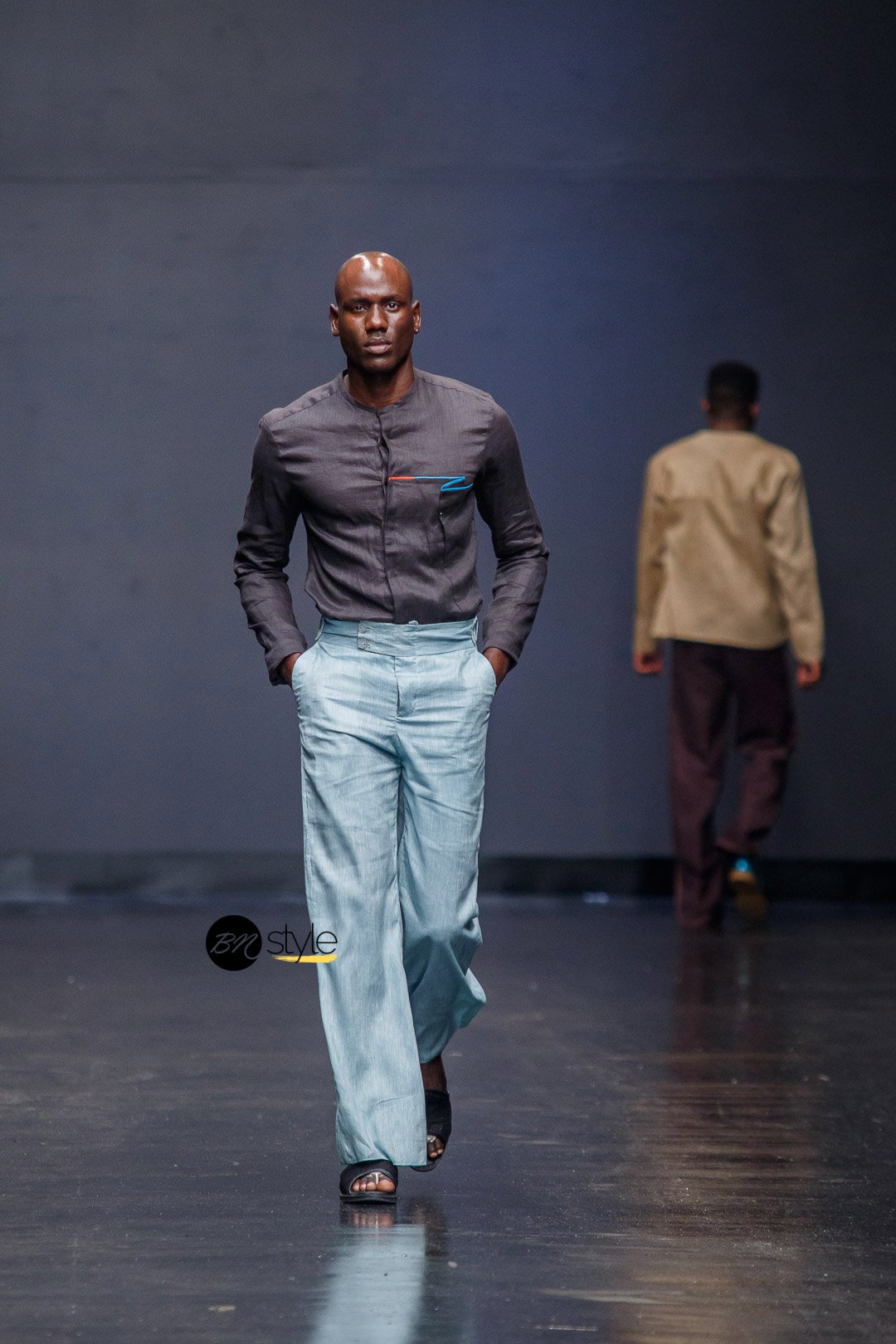 But if you were there you were given a masterclass of executing a concept, distilling your message and leaving an audience stunned to the point that they might just not only consider but also wear what you’re proposing tout-suite. The collection was entitled ‘Automatic’ and the silhouette was a throwback to the 1970’s when men wore flares, stacked heels, open shirts or no shirts at all and had swag for days. This being Kelechi Odu, exquisite tailoring, origami folds on shirts, conceal and reveal elements on tops and the showstopper closing jacket, as well as slits half way up trouser legs meant to truly ‘dress and oppress’, the gentleman in question might need to head to the gym first. Footwear was a hybrid of then and now with wooden heeled sandals that had leather, suede and gortex finishes. In a sea of streetwear, logo drenched mania and it-trainers, is the time ripe for the modern man to do a volte-face? If you were up for it here was your solution.

See House of Jahdara’s Colour Me Christmas Lookbook, Inspired By The Spirit of Christmas

More Than 50 Photos That Prove Lagos Fashion Week Street Style is Unparallelled – See All the Photos From Day 2 NOW!