GTB Fashion Weekend began with gusto yesterday, and after falling in love again with Miss Jay when I had a moment to ask him a few essentials for us Bella Stylistas. However, a few words of the PTSD kind regarding seating, getting it and staying on it, which could be described in one word: hectic. Once the hustle was over, I was just in the gratitude zone as I could embark on, in peace, what I was there for, which was, of course, to report back from Fashion’s Front Line.

Things began in a colourful manner with Tracy Reese’s collection. For those of you who are not aware a quick recap: Reese has built a fashion empire which was quick to adapt to various opportunities. When everyone else was thinking about it she went ahead and launched her house and living line; Plenty and an affordable line called Frock. This commercially minded approach was evident in her perfectly nice but terribly safe pieces we saw today. The only edge factor coming from the spherical heeled sandals. 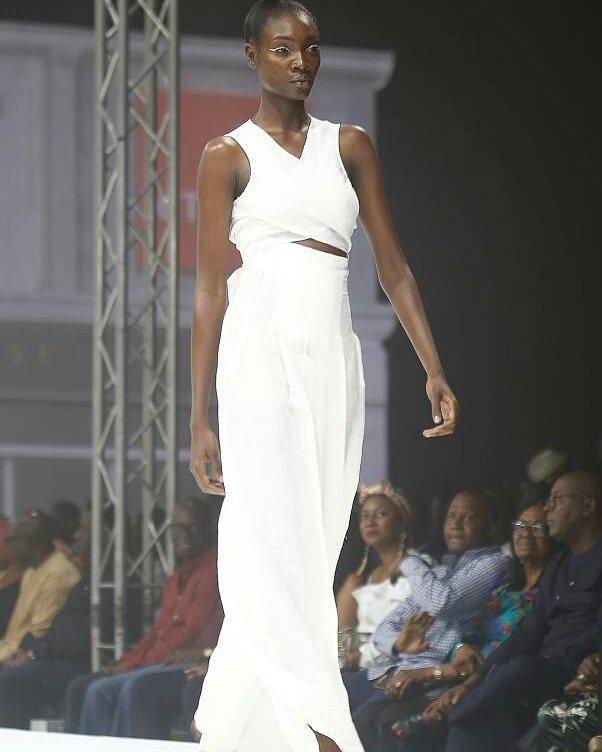 If you are going to a tea party with an aged plus-35 crowd and need to look pretty and appropriate then Tracy is definitely your girl; with the black, fuchsia and electric blue dresses, maxis and skirts to choose from. Party time was signified with an array of sequinned pieces from bolero jackets that you know the deal, you could just fling on with jeans or a black skirt and head straight out, and a sequinned cut on the bias, asymmetric cocktail dress that is destined for many sightings at Christmas Parties. The finale included a glitter gun giving us a shower of pink, blue and silver and a smiling Tracy taking her bow. And smile she should as the collection is safe and solid enough to have wide appeal and have her laughing all the way to the bank. 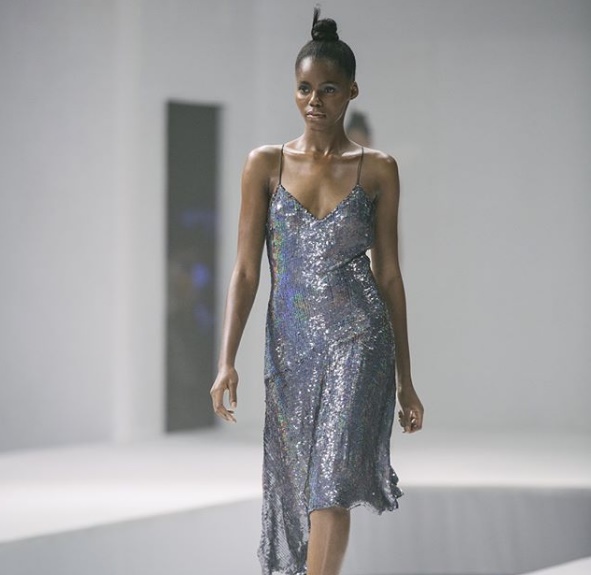 Judging by the female contingent on the FROW it was pretty clear that the LDA Army was out in force to support their Field Marshal Lanre Da-Silva Ajayi. LDA girls are a devoted clan and let’s not make any bones about it, super wealthy crew they keep coming back for more. Lanre herself with her old-school glamour (has she ever been sighted in anything other than her trademark red lip?), hair that is never a strand out of place and nipped in and fabulous vintage silhouette loving ways fits perfectly into her clients’ world. She is also the go-to for the Lagos Big Girls who are looking to ‘show them’ and Lagos Big Boys who want to spoil their other halves with something to wear to commemorate that big event: such as securing that oil-block or successfully taking over that bank: as I said before, super-wealthy attire. 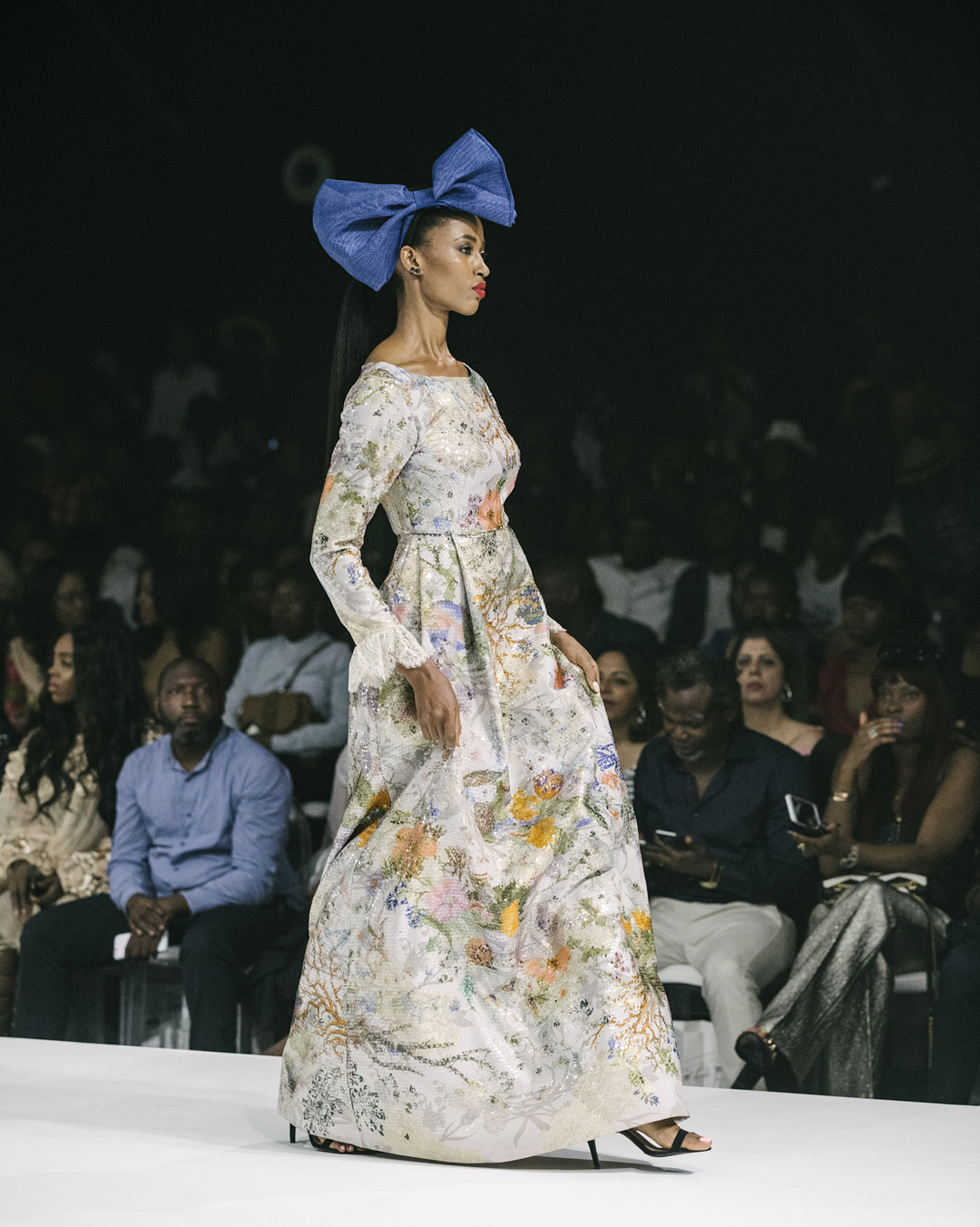 Onto the clothes themselves: there were lots of LDA greatest hits or flourishes. We’re talking ruffles on skirts, historical references seen in silhouettes and velvet trimmings and prints that had a nod to the orient and the use of silk chiffon and sequins and appliqué aplenty.

Your dry-cleaning bill will be epic, but you won’t care. One other historical reference that I didn’t expect to see was gypsy tiered chiffon, which had me thinking about the Noughties where every girl worth her fashion salt was rocking such at Glastonbury. Because this is Lagos and not a field in the English countryside, the silk chiffon maxis came in scarlet, indigo and white with the latter being sprinkled with some appliqué for good measure. 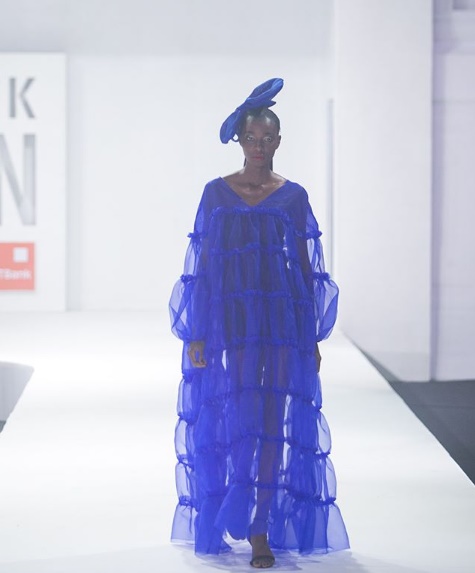 In closing Lanre was good on her dancing word, the soundtrack for her show had been the club bangers that are currently hotting up dance floors and she came out and danced, as is her signature. This is not a collection to garner new fans but is one that will keep existing ones very happy and spoilt for choice.

Taibo Bacar to my mind promised much but didn’t deliver enough. The opening trio of a white floor-length body-con dress, a full-length tulip skirted second and a chilled version of a white trouser suit got the ball rolling so to speak, but then what followed was the same dress, or awfully similar, in different colour iterations. 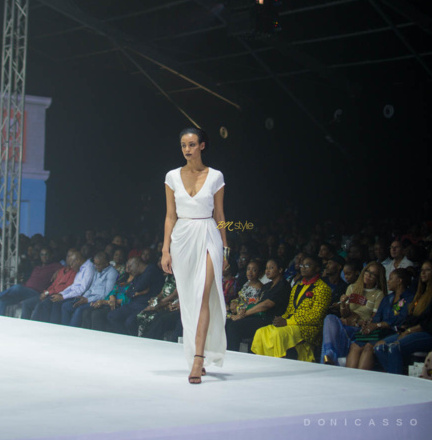 The copper series which featured more close to the body maxi-action but this time with sleeves cut and exposing the inner forearm (is this the new erogenous zone? Place your bets people) got a cheer as to did a the re-boot of the LBD only this time it isn’t little it is full length with a very high slit in the back, and you guessed it cut super close to the body. 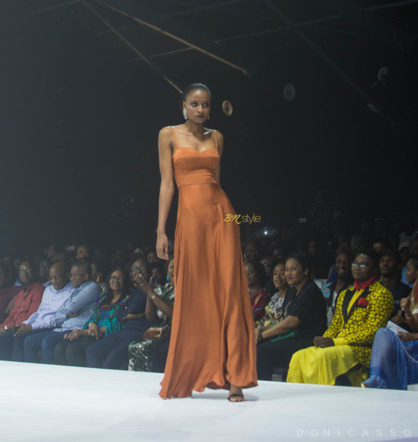 The real interest was in the accessories: the resin cuffs and bracelets were a hit as too were the shoulder sweeping tasseled earrings, and the straw Panama hats worn at a slight jaunty.

It felt somewhat odd for Meena to be closing Day 1, especially as she had just shown at LFDW a couple of weeks back, where she had won over fans and caught the eye of the international press with her knack for celebrating the female form, having a love for ruches and clever gathering and doing it all in a palette of the palest blue, softest apricot and lightest yellow . 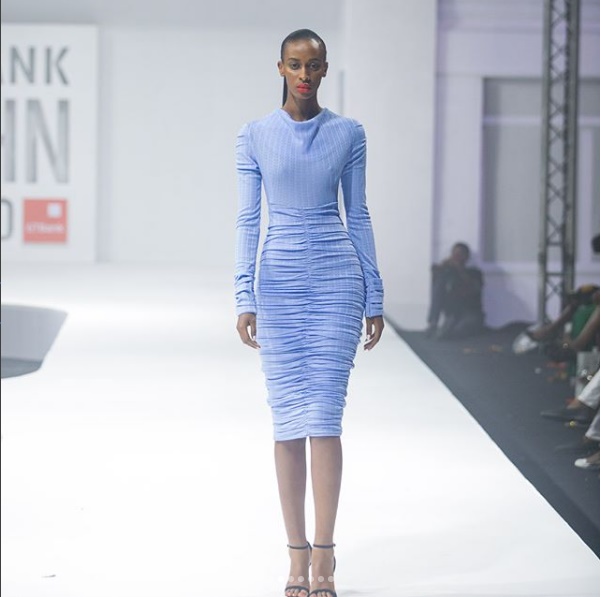 Fortunately, it wasn’t a complete repetition of what we had already seen and there were some new additions including a lace asymmetric cropped blouse that was teamed with a wide-legged trouser and was inspired. In fact, the trousers overall were the new stand-outs with an army green combat style wide leg trouser teamed with a maxi coat being particularly strong. 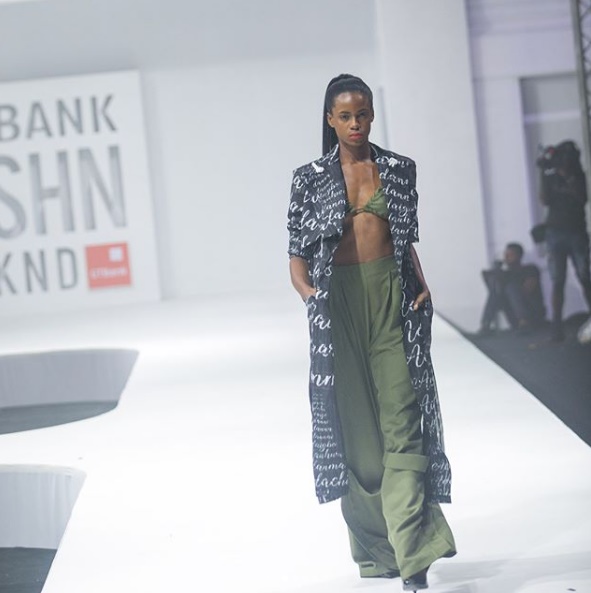 Meena was a buyer’s delight because she closed by pairing looks together in her finale runway; making it very easy to understand how it will be translated on the shop floor and of course in one’s closet.

The true ‘shut-down’ moments belonged to Mimi Plange and Ituen Basi who showed how singular vision and refinement rather than repetition of concepts can create for both great high-fashion moments and also clothes that you want, like now.  With Plange she showed us why she is reigning queen of the cover up with a series of coats and jackets that were need-it-right-away on the mark. A sleeveless over-size biker jacket  teamed with a leather and aso oke pencil skirt was fierce, bold and perfect for the collective mood right now of reclaiming one’s ‘African-ness’ even if as in the case of Mimi you are based in New York 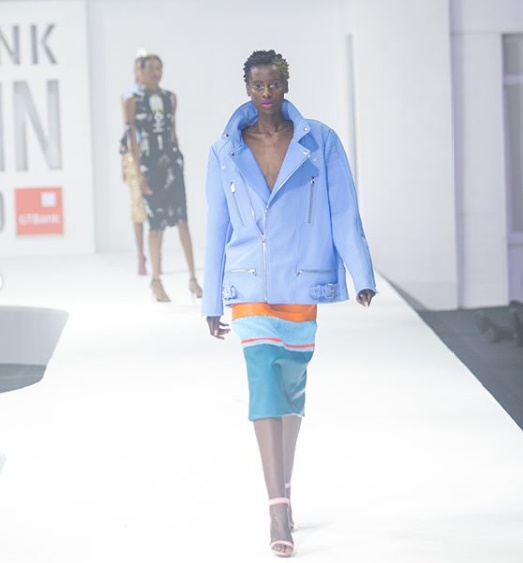 Other visions provided in leather involved the simplest a-line leather dress but because of choice of colour, a vibrant tangerine, was made extra special. Also of note was the way evening wear was made contemporary and less formal. From a black beaded sweatshirt shaped top to a cropped biker jacket teamed with a full ruffled evening skirt. Being overly preened marks you out as dated and dull, so please don’t do it was the message well received. 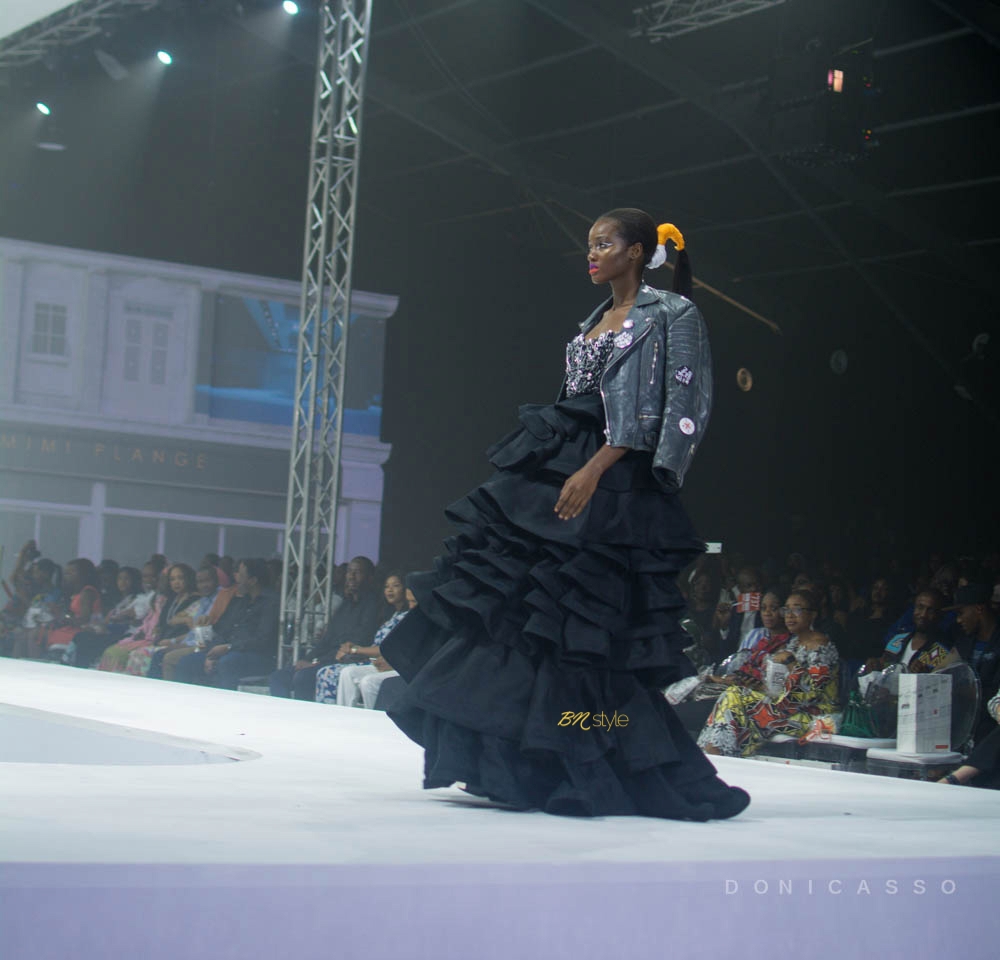 Closing with a multicoloured cocktail dress, and a model who had shaved her head and chalked a thick white stripe in the middle it was clear that the Mimi Plange woman really doesn’t give a hoot about the masses. She is too busy wearing conceptual and beautifully made pieces and celebrating the very thing that makes her special. 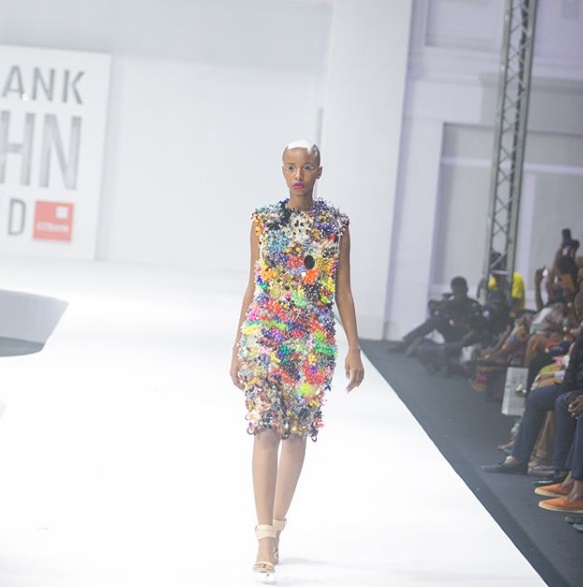 Remaining on the theme of celebrating oneself and inviting others to do the same via their clothing choices was Ituen Basi. In this assured collection from an industry veteran, we good a Love Letter to Nigeria, old and new. From the opening bars of Flavour’s classic Ada Ada, one could feel nostalgia mixing with modernity. Ituen is known for a number of things most notably her ‘strip fabric’ technique which goes above and beyond regular fringing and her tabloid newspaper print. Her show opener teamed the two but it was refreshed by the ice cream shade of the fringing and slogan keyhole backed t’s with legends such as ‘Garri’, ‘Nkoyo’ and that well seen on streets everywhere favourite: ‘This House Is Not For Sale’. 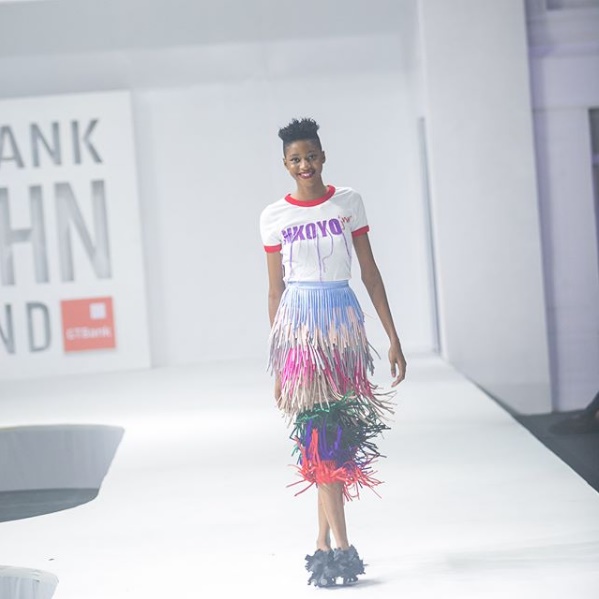 The lace traditional iro and buba was rebooted not just short a’ la Aunties’ era where it would fall at the knee, but über short where it was rendered the new Mini for Millennials. The palette choice of purple and teal gave us a further dose of nostalgia. Her series of day dresses that were reverse aprons teamed with contrasting coloured city shorts were nothing short of genius and managed to encompass the overall theme of many of the pieces sent down the runway: demure on first sighting but hotter than the midday sun on closer inspection. 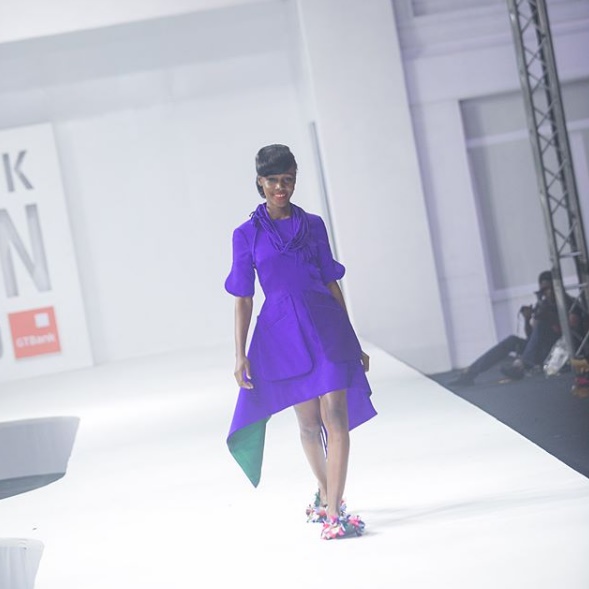 Her show finale which was a floor length coat using her fabric strip technique was a kaleidoscope of pink, blue and white and was reminiscent of the masquerade culture of yore. Add to this the make-up look which saw matte red lip (just like Mama would have worn) but this time with models smiling broadly and we were schooled in exactly why Naija Fine Girls are some of the best in the world.

10 Stylish African Men You Should Definitely Be Following STAT