If the GTB Fashion Weekend finale night could be surmised in one phrase, it would be the evening we all learnt about the power of a ‘winning concept’. For those who had not let the small matter of a heavy shower deter them from coming out in all their fashion glory, there were some treats in store. But going back to the aforementioned ‘winning concept’ when you only have ten to fifteen minutes to express your vision and capture our attention, it is good to use it wisely.

Ejiro Amos Tafiri had already shown a couple of weeks back so it was interesting to see if we would receive if not a whole new collection, then perhaps some additions that would pull together the concept and themes of what she had previously presented. Incredibly, we got a whole new collection! Mad props to her machinists who must be sitting in a darkened room recovering from their extraordinary efforts. The florals were still there, but there were also different silhouettes with an 80’s lilac puffball skirted cocktail dress getting a cheer from the back. 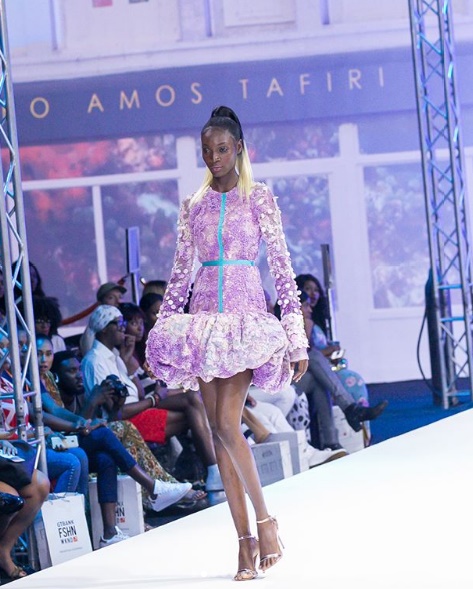 Back in the day in the 80’s a woman wasn’t considered dressed unless she had shoulder pads and plenty frills going on. The Full-On Femme archetype was apparent in the whole collection which featured tiers and wafting silk chiffon in floral prints, but I was left a little concerned.  If the models being sent down the runway were looking a tad chunky, what of us mere mortals with frills trailing from our hips and arms? Ejiro who has made her name from creating silk jersey drapery that enhances the female form and make all body shapes look fabulous had ‘forgotten us’ in this collection. But then what is designing if not experimenting right?

If you’ve ever been in the presence of a genuine A-Lister as in Beyoncé, Rihanna, Kim famous, you will notice how they literally change the atmosphere in a room by their presence. Perhaps because of his long history of dressing the ‘hottest chicks in the game’ including one Mrs. Carter and one Mrs. West, LaQuan Smith knew exactly what to do, in this his first full show in Lagos. The opener: Oh my, I am still just reliving that moment again and again as and when needed, such an enormous dose of fierceness it was, was one word EPIC. Capitalising is entirely intentional, especially when the model struts down in nothing but a black Patent PVC Puffa Jacket, high legged body-suit and over the knee patent boots that are just sexy as. 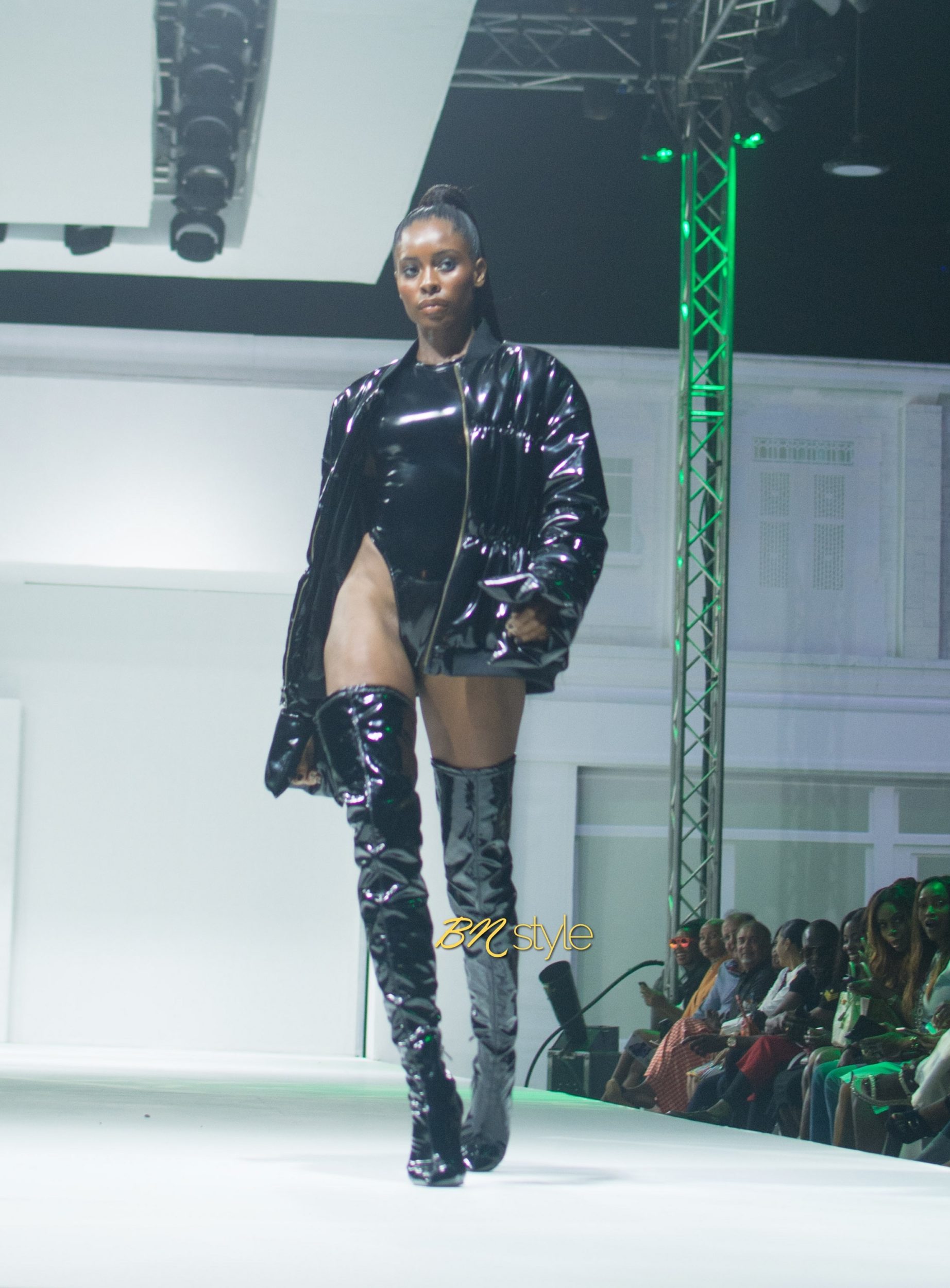 Of course, the audience erupted and stayed in the scream-as-if-you-in-a-concert zone for the remainder of his show, which was an homage to High-School Cliques the American edition. The other big hit, which we had hinted in our Sneak Peek, was that LaQuan was introducing menswear. As you would imagine from his women’s offerings these were not clothes for the shy guy, as super slim fit plaid trousers were teamed with sheer and jewel-encrusted sweaters. 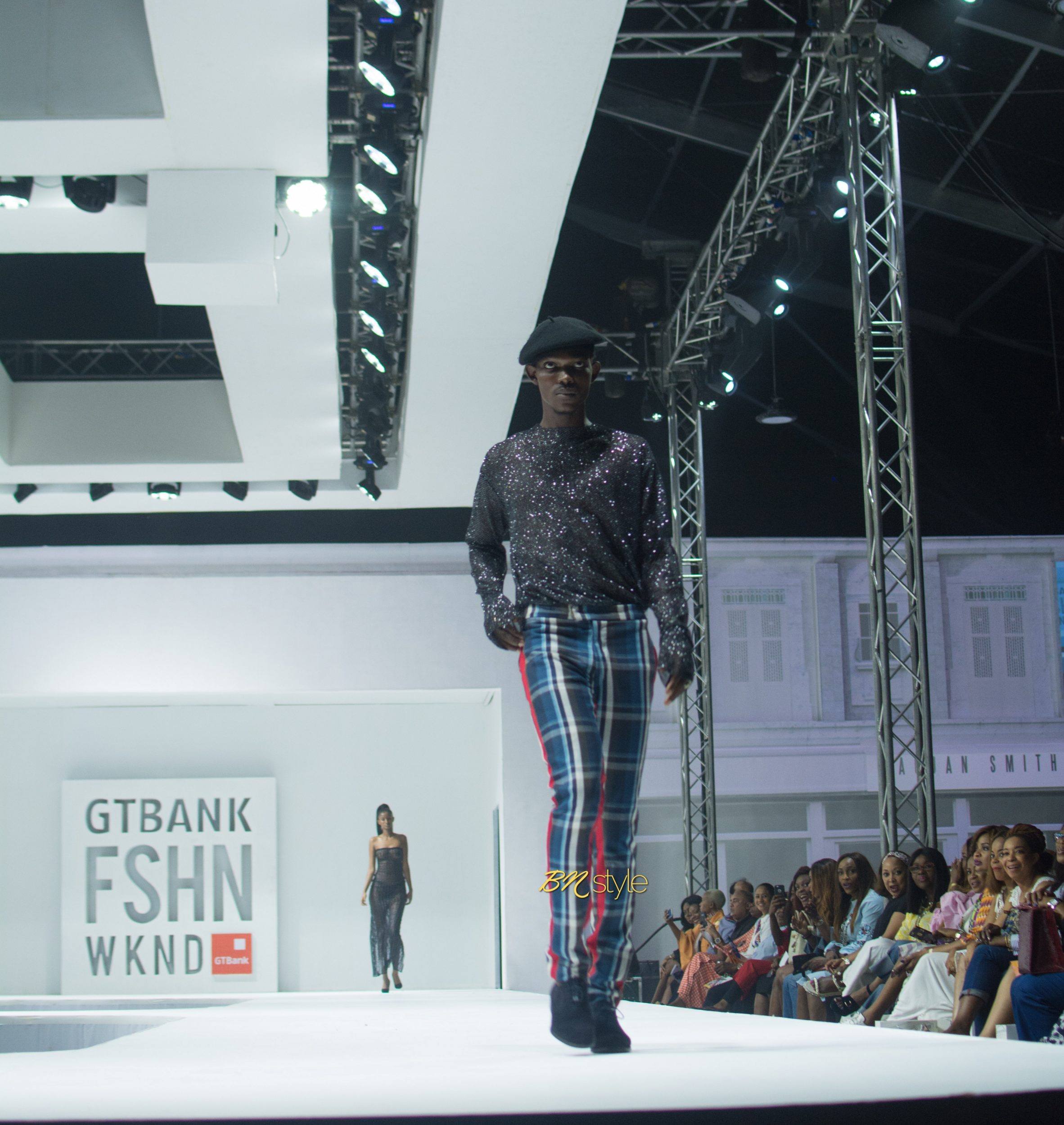 Camouflage got a reboot in both men’s and women’s pieces but it was the women’s iterations that featured a bomber jacket casually falling off one shoulder and the tiniest of hot pants that had people squealing. In the men’s the legend “LQS” made it very clear which squad you belonged to or would be figuring out how to join. A series of black, velvet, dusted with sequin dresses hinted at grown-up glamour and Awards Season itself, but because this was LaQuan we also received slits to the hip bone and visible zips that had one’s mind going there. By this point the cheering had reached fever pitch and I could well understand why: the perfect fashion show gives you a hit of magic and a dollop of a clear direction that the designer is suggesting you take. If you want to unleash your inner Slay Queen, look no further.

In the instance of Weizdhrum Franklyn’s show there was plenty of conceptualism but not enough distillation of the ideas presented. Allow me a quick disclaimer; I have always been one for the conceptual and was loving Commes Des Garcons long before Rei got her star-turn at the Met Exhibition earlier this year. An ode to ancient kingdoms gone past is fair enough if expertly treated. But when what we are getting is ‘wannabe couture’ flourishes, very pretty accessories including floral earrings aside one can’t help but feel a wave of disappointment. Case in point: a yellow mullet length gown which obscured the model’s head in ostrich plumes and blooms.  Fashion is allowed to challenge, but when the point is as unclear as the probability of navigating the day in a dress it is offering as a sartorial quandary, it frustrates. 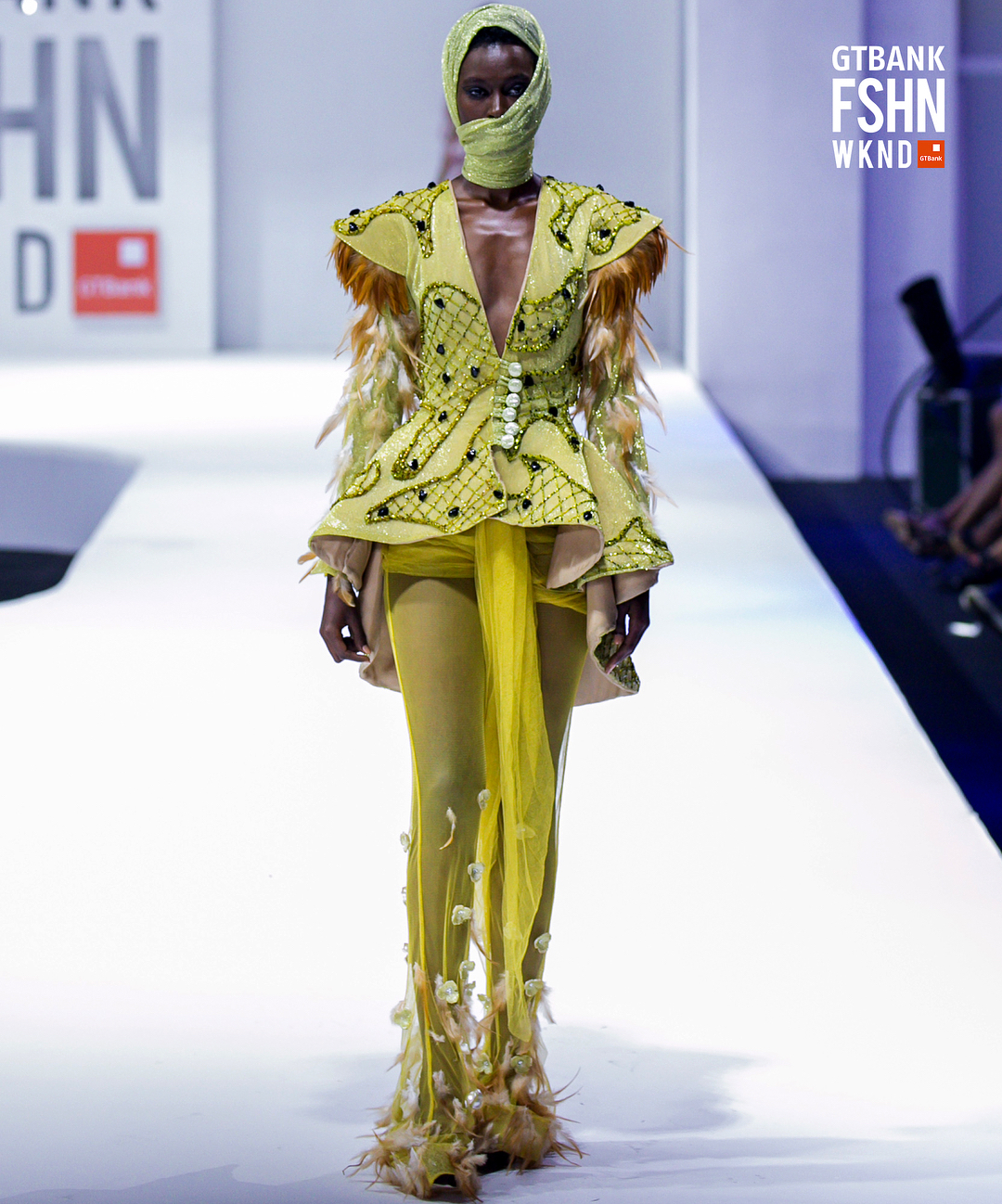 There was a lot of ostrich feathers in the mix and ensembles would all be marked as occasion wear. Not that this is a problem per se, one doesn’t go to Marchesa for a piece you can do your weekly shop in but nevertheless, I think a true designer should have all bases covered. In case the audience had missed the point (the dress with a pyramid of Giza in relief at its heart and the head-tie that was reminiscent of Nefertiti, Ancient Egypt was hammered home with a finale dress that had Nefertiti in the heart of the bodice in a sculptural relief. All one could think was why?

Milles Collines has been making a splash in their native South Africa with their easy separates and this show illustrated their easy accessibility: the palette of grey and yellow was clean and sharp as too were the box white trainers. But it was primarily the accessories that brought the collection to life with beaded glasses chains, cuff bracelets and half-moon shaped handbags being an instant addition to refreshing the working woman’s wardrobe. 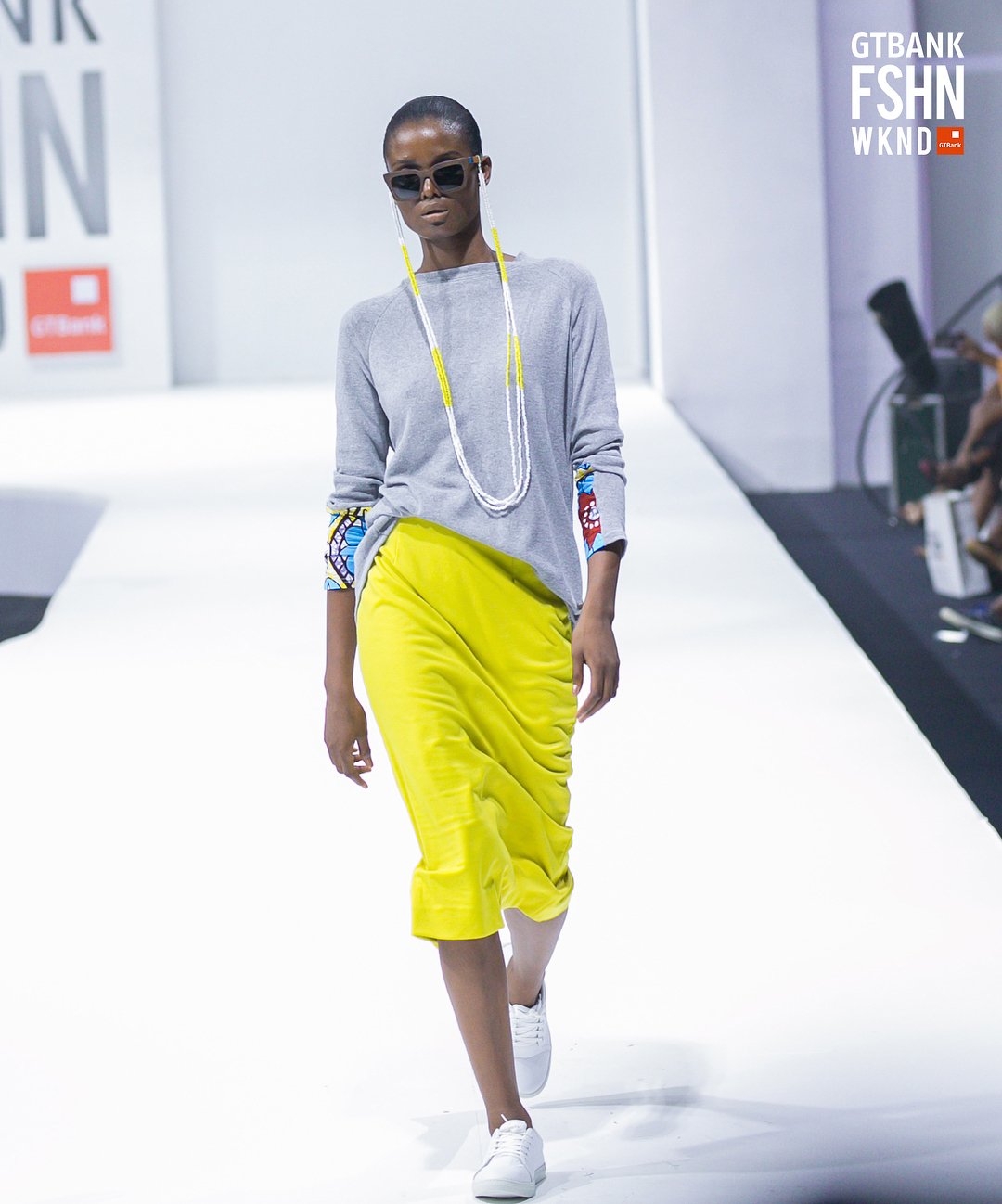 Ladunni Lambo has had quite a bit of buzz and this can be a double-edged sword:  on one level we are primed to be wowed and on another it will take less to dismissed as a non-event, especially when one is expecting so much more. In this instance we received a collection that seemed somewhat confused with sparks of brilliance. The trademark layering was there with a Victorian style blouse with bodice over dresses being particularly fetching, but in all it felt somewhat puzzling, as if ideas were left unsaid for us to interpret and infer, which is fine, but when you are wishing to capture not only a moment but also a customer becomes all the more baffling. Especially when she took her bow the ensemble that Ladunni herself wore was gorgeous and nicer than anything that had preceded it on the runway.

The finale was provided by Julien Macdonald a designer whose career has been built on the red-carpet and has dressed some of the most famous women in the world for their most “papped” moments. I must confess, I was rather hoping for a special collection that was inspired by the beauty and grace of the Nigerian and African woman, even if it was half the length in terms of what was made, but what we got instead was the opportunity to see up close and personal some of his ‘Greatest Hits’ from years gone by. The cobweb dresses, heavily embellished sheaths and dresses with plunges and slits that would make your Auntie blush and call a family meeting were all present and correct. 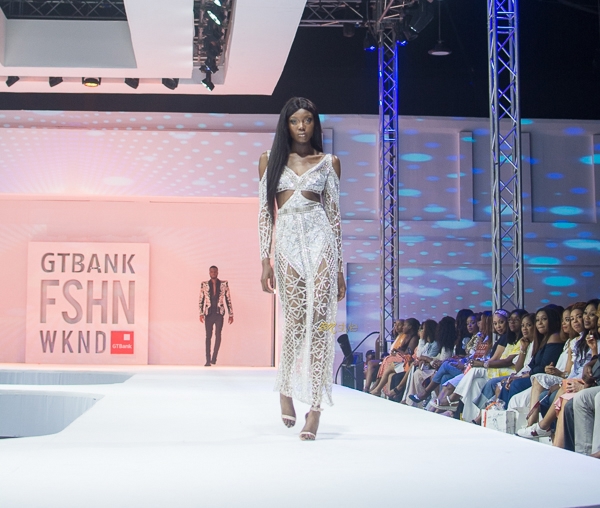 The swimwear got a cheer but it was nothing that one hadn’t seen before in terms of shape and palette. Menswear was less successful: the bondage style trousers felt dated rather than nostalgic and the heavily embellished sleeves on jackets, whilst perfectly at home in maximalist Lagos, where shine-shine is a way of life for all, all posed the question of whom else and where else would these pieces be worn? 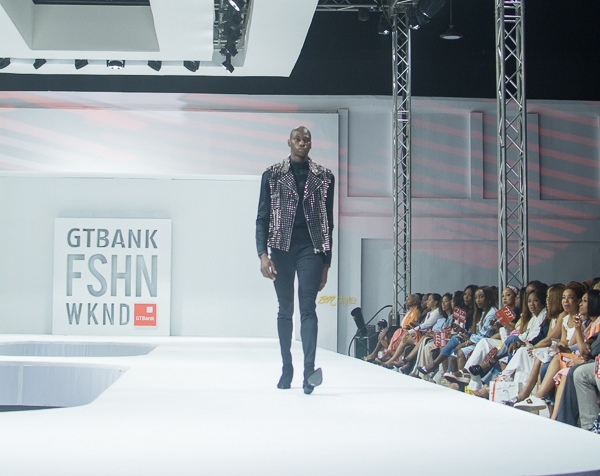 The closer was a black and gold mullet length dress that was high-octane drama but what had me thinking wistfully of years gone by was the cobweb cat-suit that preceded it and hinted at Julien’s knitwear roots and love of the female form. 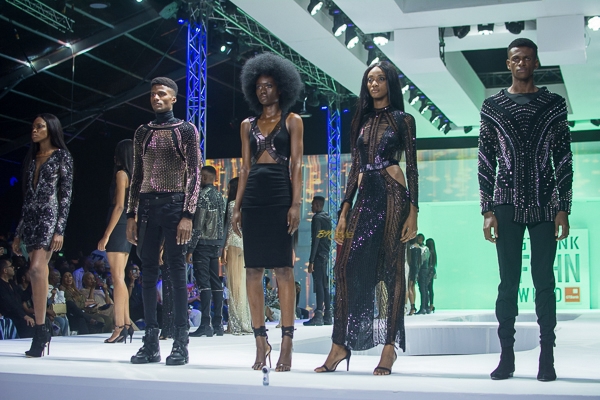 As the show closed complete with the mother of glitter bombs that showered the audience, Diana Ross’ anthem ‘I’m Coming Out’ blaring from the sound-system and Julien and models dancing on the catwalk, the celebratory mood was contagious.

GTB Fashion Weekend to my mind is more about the retailers in the main hall than the runway shows in themselves which are briefer and fewer in number than other fashion weeks on the continent. However, this did not stop some designers taking the opportunity to give us a clear aesthetic exposition of how they wanted us to feel in their clothes and what they would propose we wear. To the victors go the spoils and for the vanquished, there is always next year.0

Titilade’s Ultimate Style Guide: How To Know & Dress According To Your Body Type