A Brief History of African Girls Killing It at The Oscars

The Oscars are a few hours away and as I type, hair is being teased, faces are being ‘beat’ and trays of jewellery are being laid out in Hollywood Hotel Suites for the biggest stars in the world to rock and of course wow us with. Obviously, us Bella Stylistas are particularly excited about the African ladies who are going to be repping and slaying on the Red Carpet tonight. But what makes for a killer look? You know one that will go on to be referenced through the ages and gets a hashtag, memes and a lifespan all of it’s own? While Lupita may be arguably the African Queen of the Red Carpet, melanin popping has not been a solely Made-In-Kenya affair. Ahead of tonight  we give you two Nominees (and one winner) who more than brought it on the Oscars Red Carpet. 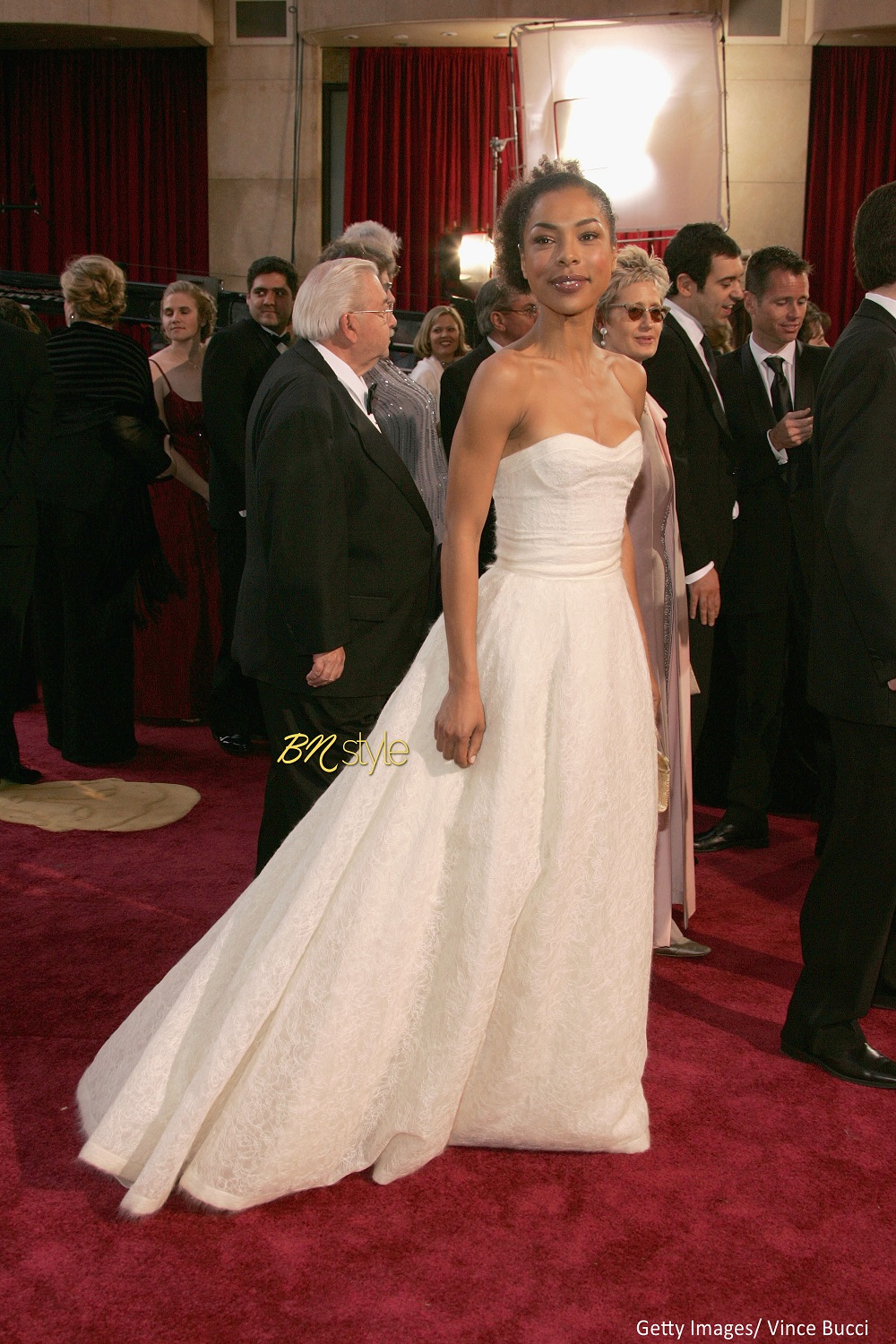 Sophie Okonedo was a pioneer in 2004 on so many levels. The British-Nigerian was nominated for Best Supporting Actress for her role in sleeper hit Hotel Rwanda, but she also provided a masterclass in Principessa Naturalista Chic before it was even a thing. Note, dear reader this was 2004, i.e. before Twitter, Instagram or YouTube had been founded or any Natural Hair Blog had become viral and essential viewing and reference material, but let’s focus on the dress first. A blush, silk princess line strapless number from Rochas, when the legendary Olivier Theyskens was  still at the helm, which gave our Red Carpet belle an ethereal look.

However, what made this look super radical and ahead of its time (besides the naturalista hair that was pinned simply back with a pearl studded headband), was the complete lack of additional adornment. The Oscars is as big a night for High Jewellery brands such as Cartier, Harry Winston and the rest as it is for fashion designers, so for a nominee in one of the main categories to forego the bling altogether was radical with a capital R. Also of note was the make up, which followed the barely there mantra of everything else, yes Sophie’s brow was defined and there was a mascara aplenty, but a sweep of blush and a glossy nude lip completed look.Forget face-beat, this was no beat-at-all. High-risk in many ways, especially for such a big night, but there was something fresh, modern and beautiful in the approach, execution and overall impact. Before Lupita, Solange, Issa and Tracee released the ‘fro,  there was Sophie and she was sensational. 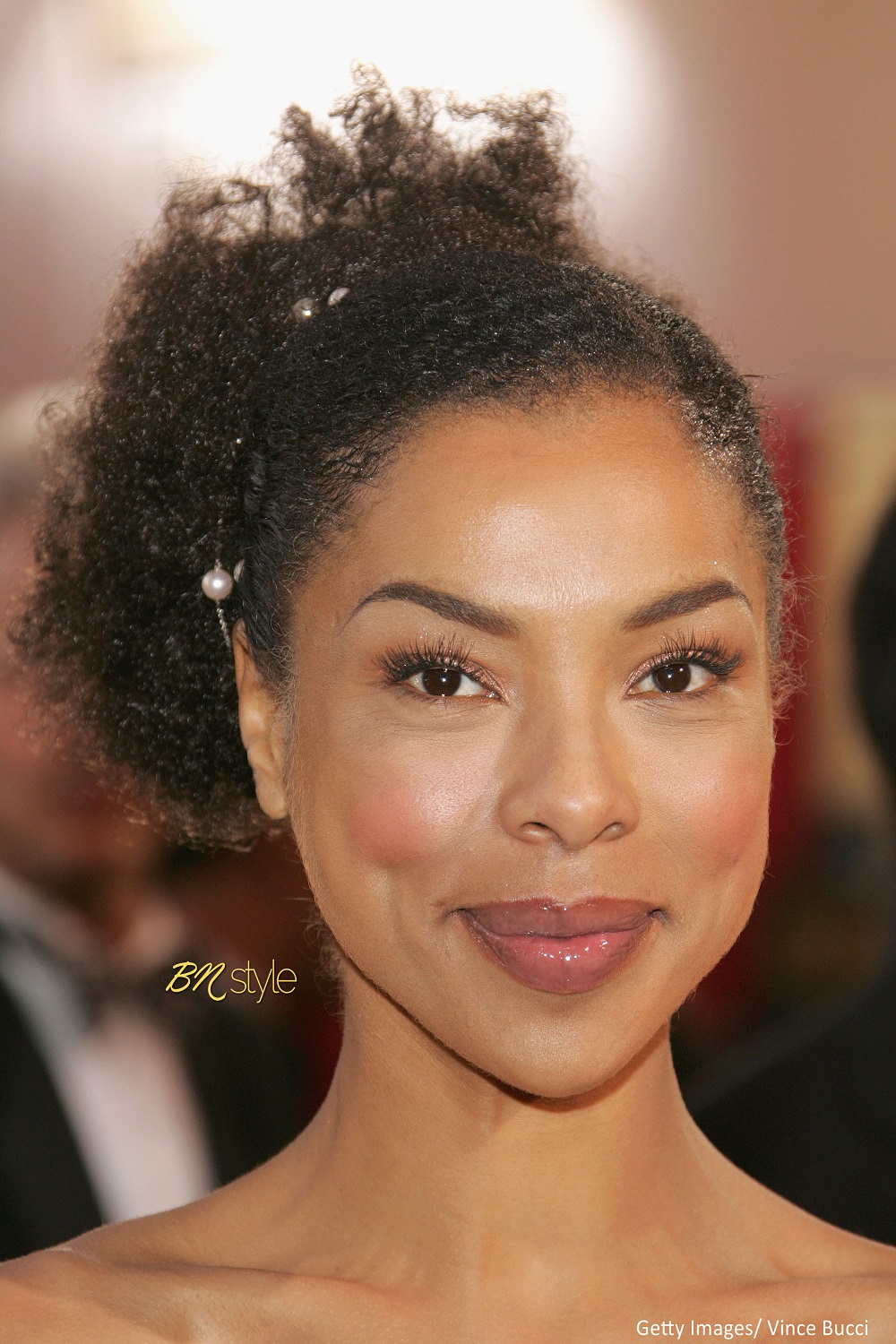 Ruth Negga burst on to our screens, Red Carpets and glossy magazine covers courtesy of  her star turn in Loving, a movie that landed her a flurry of  awards’ season nominations including the 2016 Best Actress Nomination at the Oscars. For that night the striking Irish-Ethiopian Actress decided to go for full-on glamour in a red lace Valentino Haute Couture gown designed by Pierpaolo Piccioli. The high-neckline and sleeves gave were reminiscent of an Edwardian aristocrat and the ensemble was completed with a go-hard-or-go-home Irene Neuwirth ruby and diamond tiara and drop earrings. A Blue ACLU (American Civil Liberty’s Union) ribbon was a cause to close to her’s and other stars’ that year’s heart but didn’t detract from the committed to high-octane drama that was signified by the choice of this dress. 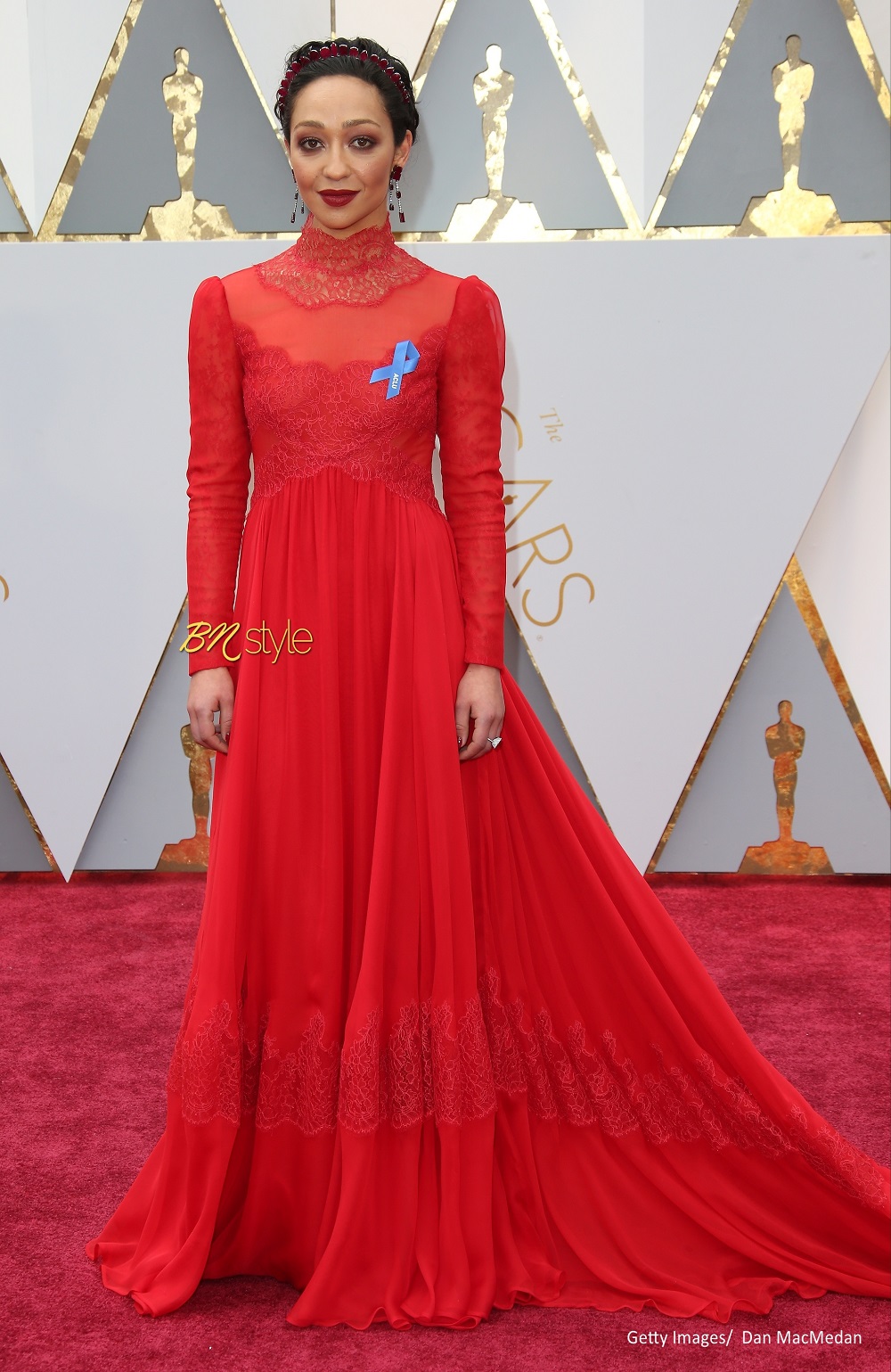 Beauty was equally do-or-die for Ruth who whacked on the kohl, went for it with a strong brow and even dabbed a sweep of edgy red shadow on her lids. Her cheeks had the rosy sheen and the ruby red lip that matched her jewellery was indicative of a star who got the memo, and had come to shine bright. The simple up do, allowed her to showcase the jewellery perfectly, and though she didn’t take the Oscar home with her, definitely won the Awards Season best dressed actress with her Louis Vuitton metallic sheath for the Golden Globes being my personal favourite for pure epic factor. 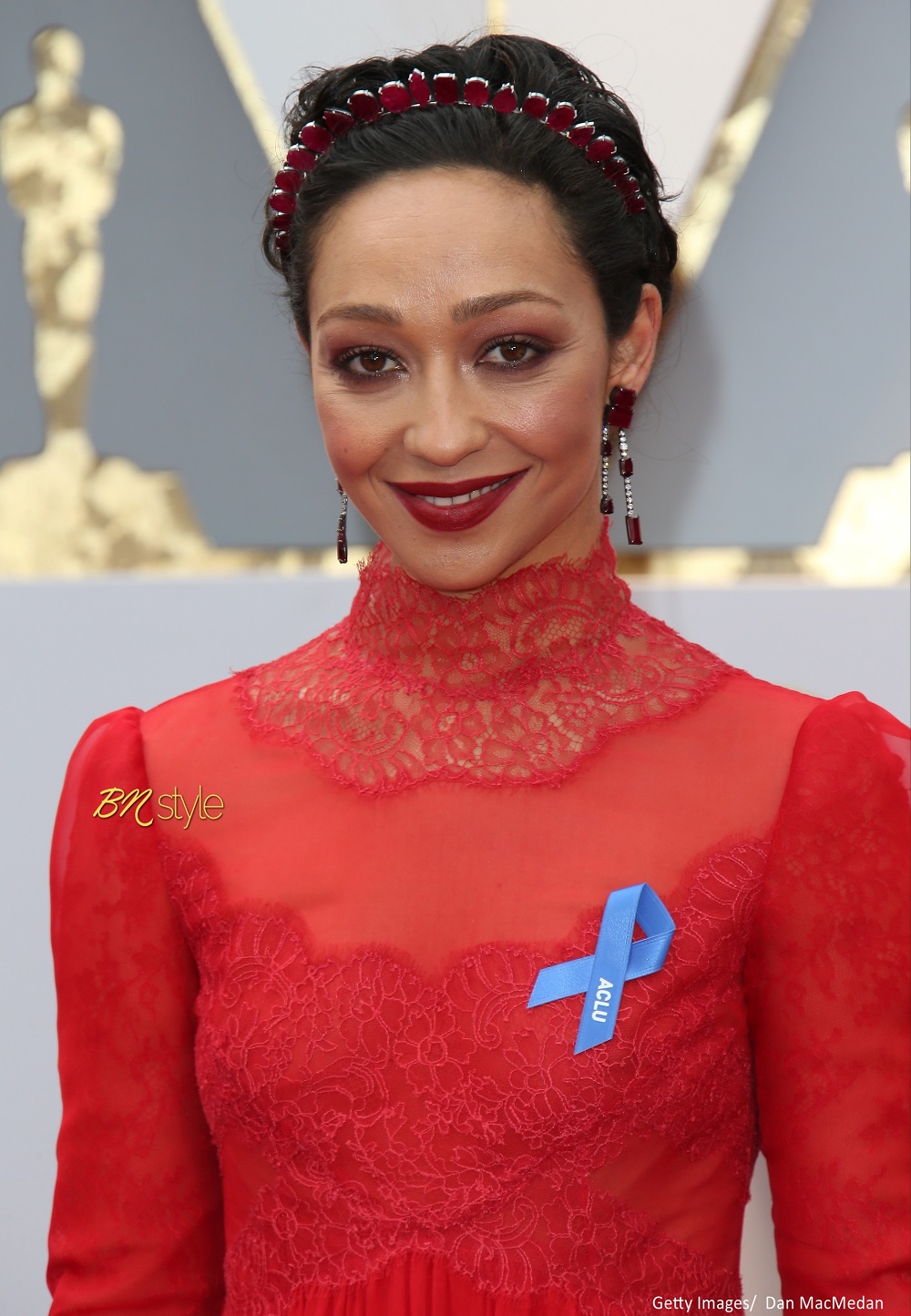 Lupita Nyong’o’s  Oscar winning turn in 12 Years a Slave seems a lifetime ago, such has her omnipresence in the public consciousness been since 2014 when she won the Oscar for Best Supporting Actress. For that magical night, she chose custom Prada, and the silk pleated deep V-Neck gown had a classicism that harked back to the Ancient Greeks. The colour, became a hashtag with #NairobiBlue trending on the night when Lupita said the hue was a visual shout-out to her home town. What could have seemed tarty, a low back and fronted dress, evoked innocence, in part because of her frame but also because of how it contrasted against her deep complexion. Quite simply Hollywood got itself a new Goddess to add to its pantheon. 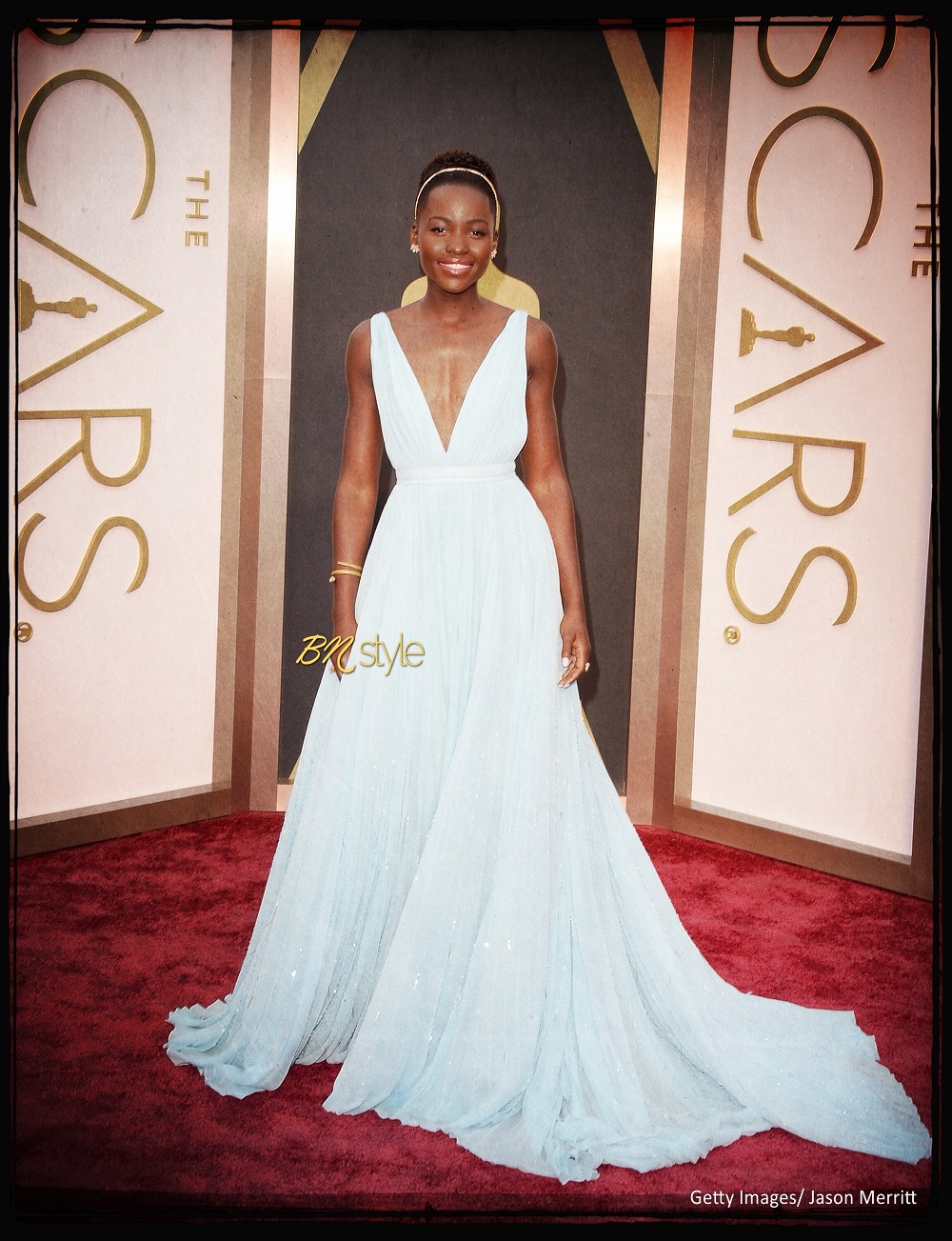 Lupita’s beauty look was pared down minimalism. eyes were lined, brows were clean and her lips were a rosey nude, which on first look might not seem the best pairing (perhaps a light chocolate ?), but added to the whole innocent but other-worldly vibe that her dress had already dictated. Hair was natural but in light of Sophie Okonedo a decade prior, the choice of a headband was not as new and front-line as it was reported at the time. But if you are going to do a hairband, it doesn’t get more glamorous than a Fred Leighton diamond one! Teamed with asymmetric earrings and she has defined the new way to do high-jewellery, irreverently and fully reflecting your personality. 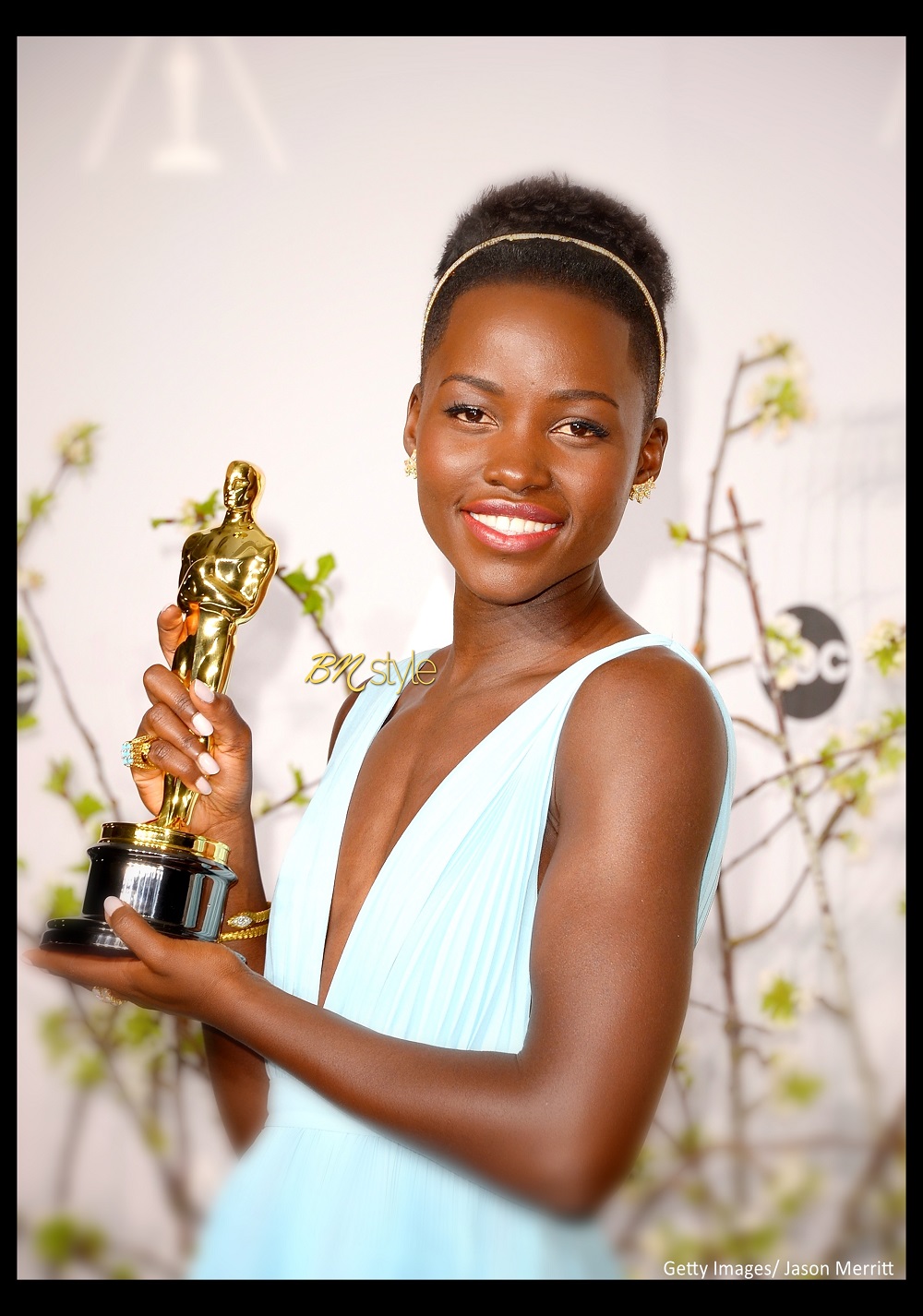 So, no pressure for the African ladies we are expecting to bring it this evening, but if this brief trot through African Girls slaying on the Red Carpet is anything to go by we are in for a serious dose of Black Girl Magic in a few short hours time. With no-one nominated from Africa or with African ancestry, bar Daniel Kaluuya, we are here this evening for the sartorial shut-downs only.