Oh, what a shutdown it was! Not that one should have been surprised, as last night was the evening where scanning the show order sheet, was the equivalent of sitting down in a restaurant to be given a menu that had been devised by the world’s most garlanded Michelin starred chefs. However, excellence expected and then received is two different things, and here I am still reeling over what was shared last night, but more of that later.

It being a Friday night, and with some of fashion’s biggest names showing, the room was packed, in fact the runway underwent a facelift to accommodate the deluge, becoming a horse-shoe shape and providing a different perspective from which to view the pieces. There was also a lot of high fashion on the guests and I spied plenty of women in Lisa Folawiyo, men in Orange Culture, a floor length Dolce and Gabanna number and cutest of all the twin toddlers of Post Imperial’s creative director, Niyi Okuboyejo who were decked out in possibly the chicest romper suits ever.

First high note was delivered by Clan, which has Teni Sagoe, daughter of the legendary fashion designer Deola Sagoe at its helm. The pressure is always high if you come from pedigree, be it people expecting to see correlations in one’s parent’s work or if they have a malevolent streak, anticipating a collection that screams nepotism rather than talent. What Clan offers though is a modern take on sexy. The show’s opening series of raspberry pieces was a treat, with models slinking by in cut close to the body dresses and jumpsuits. Also notable was corsetry, with velvet panels cinching everything in for that ‘snatched’ effect. 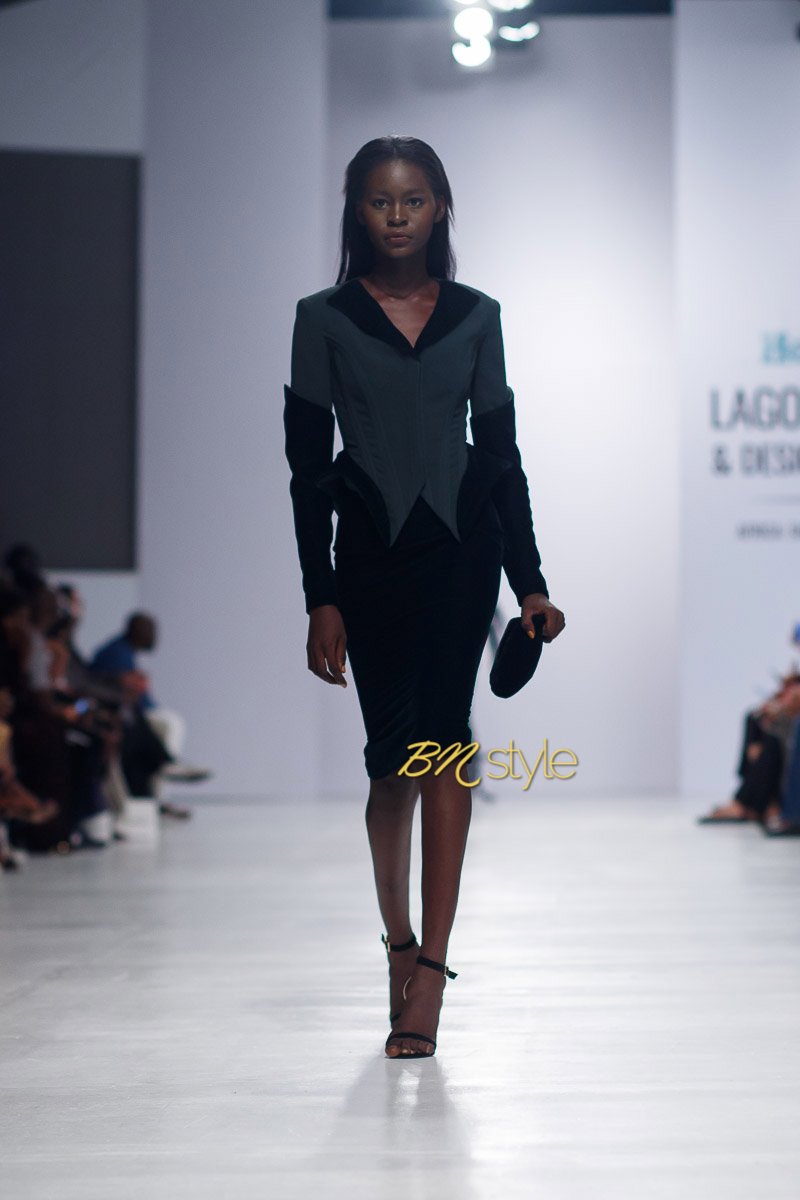 Teni understood and mastered early in her career the importance of accessories as both gateway into a collection and means of relaying deeper messages. The Clan girl is definitely too cool for school to totter into a party in sky high heels, instead she slips on chocolate trainers with outsize pom-poms, all the easier to dance the night away. And why delve into the realm of beauty-pageant queen cliché and rock a beaded clutch when you can sling your phone, lipstick, credit card into a fringed bucket bag and keep things moving? 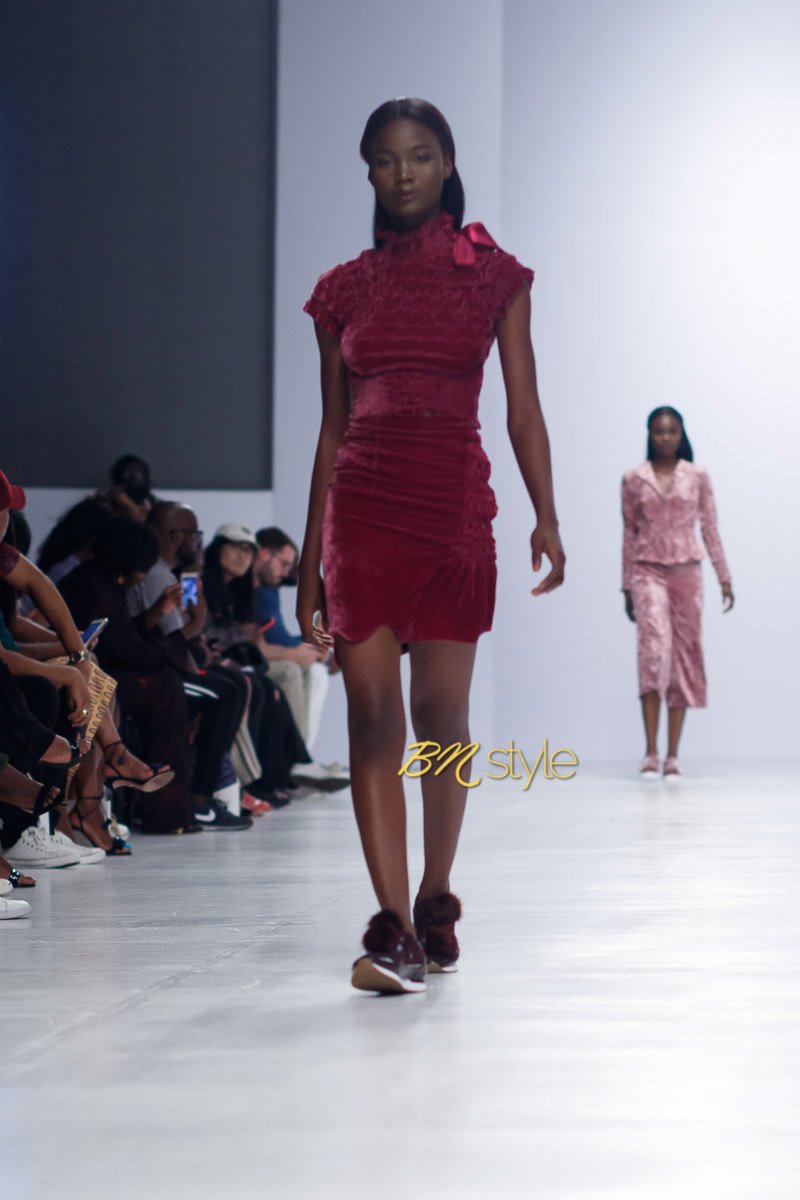 Menswear was presented strongly over the course of the evening with five of the industry’s biggest name all on the same night. All the designers had very different visions, reference points and concerns but the overall message that could be surmised was ‘be you unapologetically’. Even if, as seen with the evening’s shows’ closer Mai Atafo, you move deftly from giving us a very well made, considered and slick exposition on Nigerian trad with a generous helping of Savile Row tailoring references and fabric choices, to fulfilling your need to bring Disney to the runway, don a mask and waltz with Princess Belle.
Regarding the collection itself, the hounds-tooth and monochrome checked remix of South-South attire with a tuxedo pant rather than wrapper is going to fly off the racks, and is coming to an it-wedding near you. 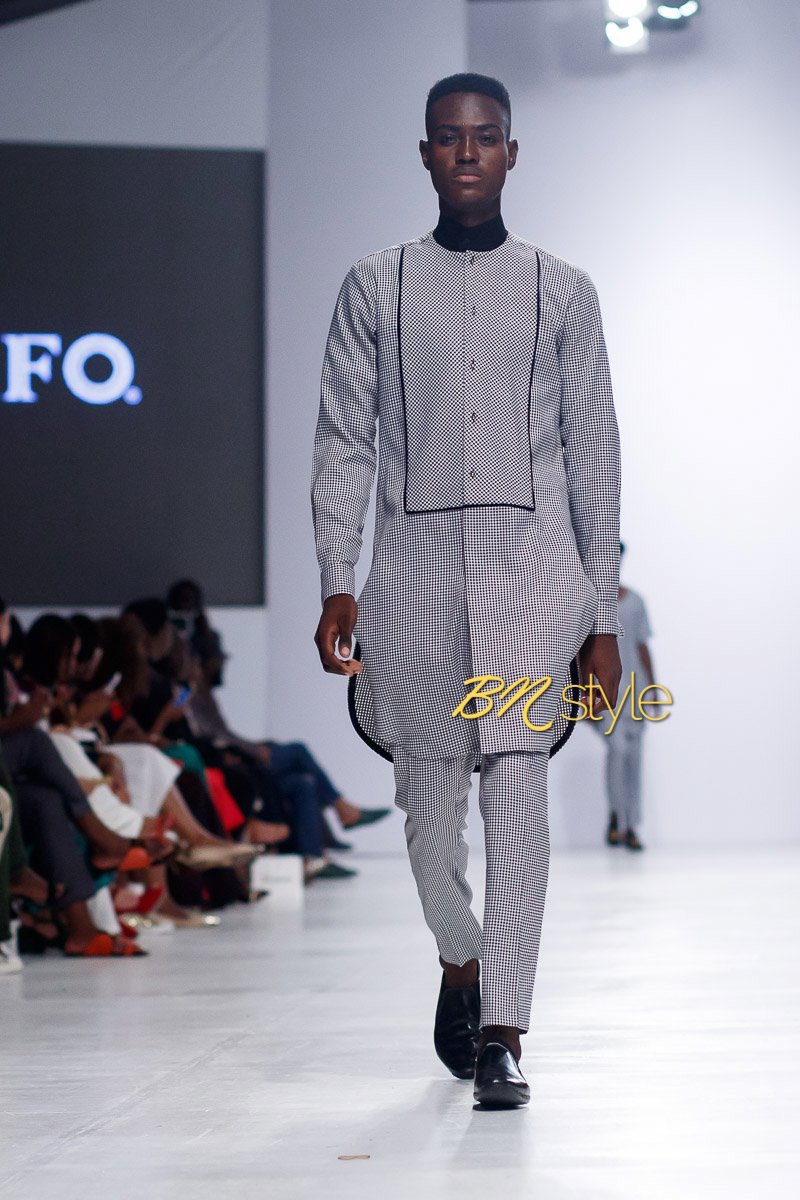 Maxivive delved deep into the realm of emotional state of being, sexuality and politics. There was also plenty for the quirky man and woman about town to work with: from shirts and suit jackets that had a double and sometimes triple sleeved cuff feature, through to man-bags with “not by appointment” emblazoned on them. The bondage references may frighten many away, as too will the striped bodysuit teamed with white transparent trousers that had Mary, mother of Jesus embroidered on the lower portion but this felt like an important collection in terms of pushing the conversation along by way of clothes of what it is be authentically yourself. 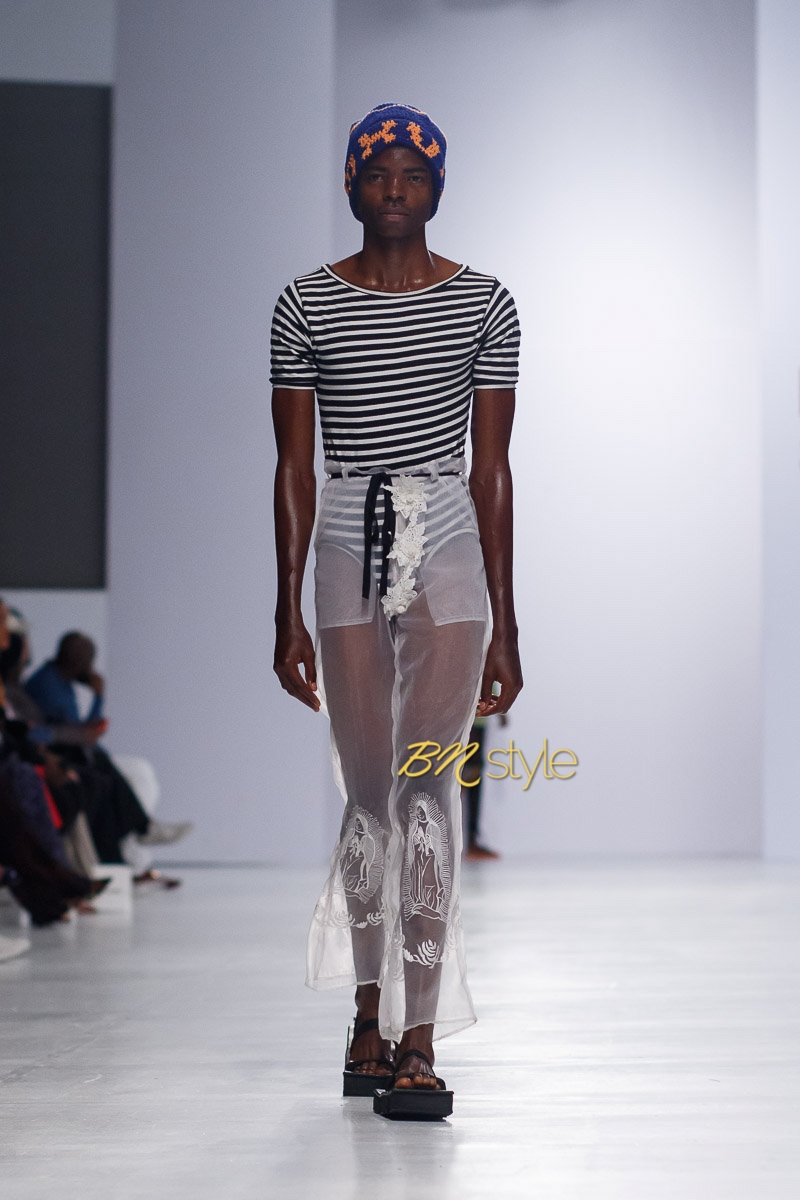 Tokyo James also riffed on the similar theme of what it is to be man today, and the fluidity was presented via the prism of the “African Cowboy”. The collection, for the most part, was presented in South Africa Fashion week earlier in the year, but there were additional pieces which evoked the central theme of being a frontier fashion warrior as in touch with his feminine side as with his masculine. These ideas translated into suiting that was close on the body, a palette of white, pink, oyster, grey and pinstripe suits that had spiders, giraffes or lizards adorning them. Accessories came in the form of re-imagined Stetsons and beaded drop earrings. This being Tokyo, coats were as strong as ever, with one burgundy crocodile and pearl festooned trench drawing a round of applause from the audience. A lap of honour from the designer himself was testament to the fact that he has joined the menswear establishment. 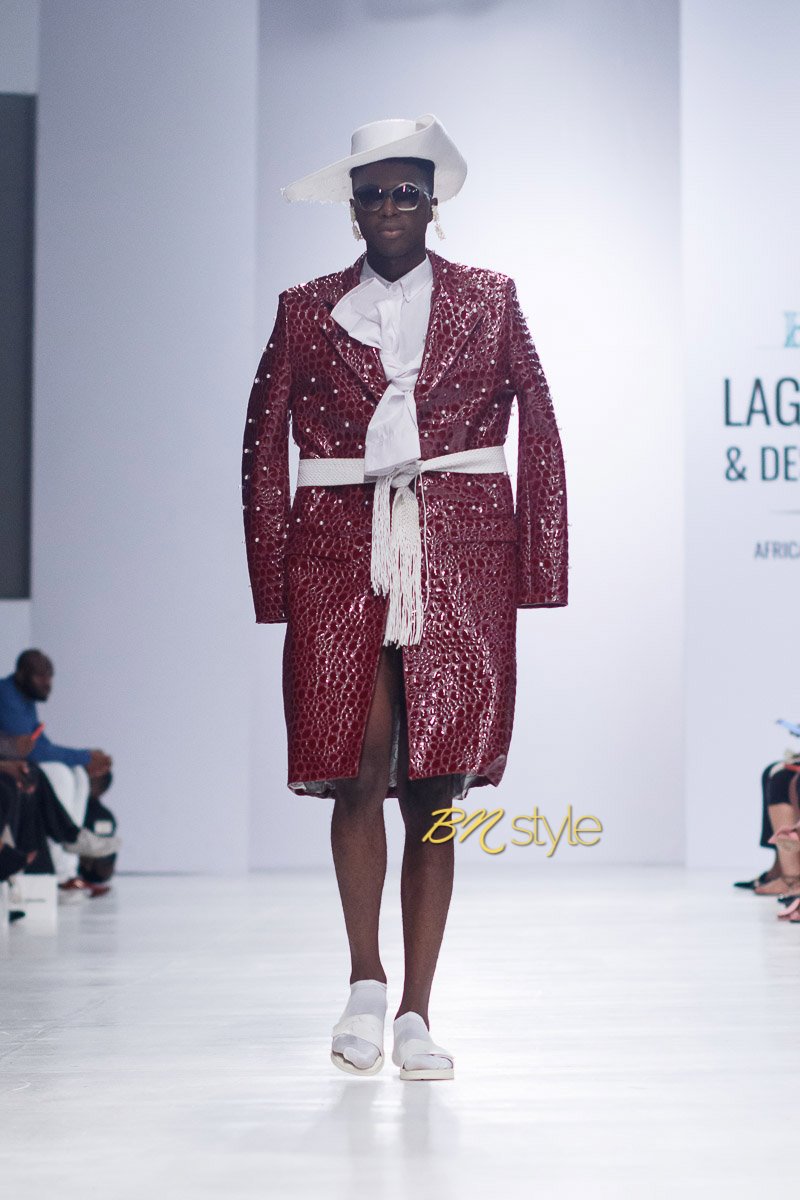 Post-Imperial went back their roots too, Niyi Okuboyejo, creative director took it back to print and fabric, just as it was when the brand burst onto the scene with rave views and a cult following courtesy of their line of ties. The ties were there, present and correct and still every bit as desirable, but so too was the most covetable parka ever an orange to ultramarine affair that also got a round of applause as it made its way down the runway. Tasteful to the point of epicurean print combinations illustrated how one needn’t be a wacky to wear contrasting combinations, and that when teamed with simple leather Moroccan style slippers you are good to go. 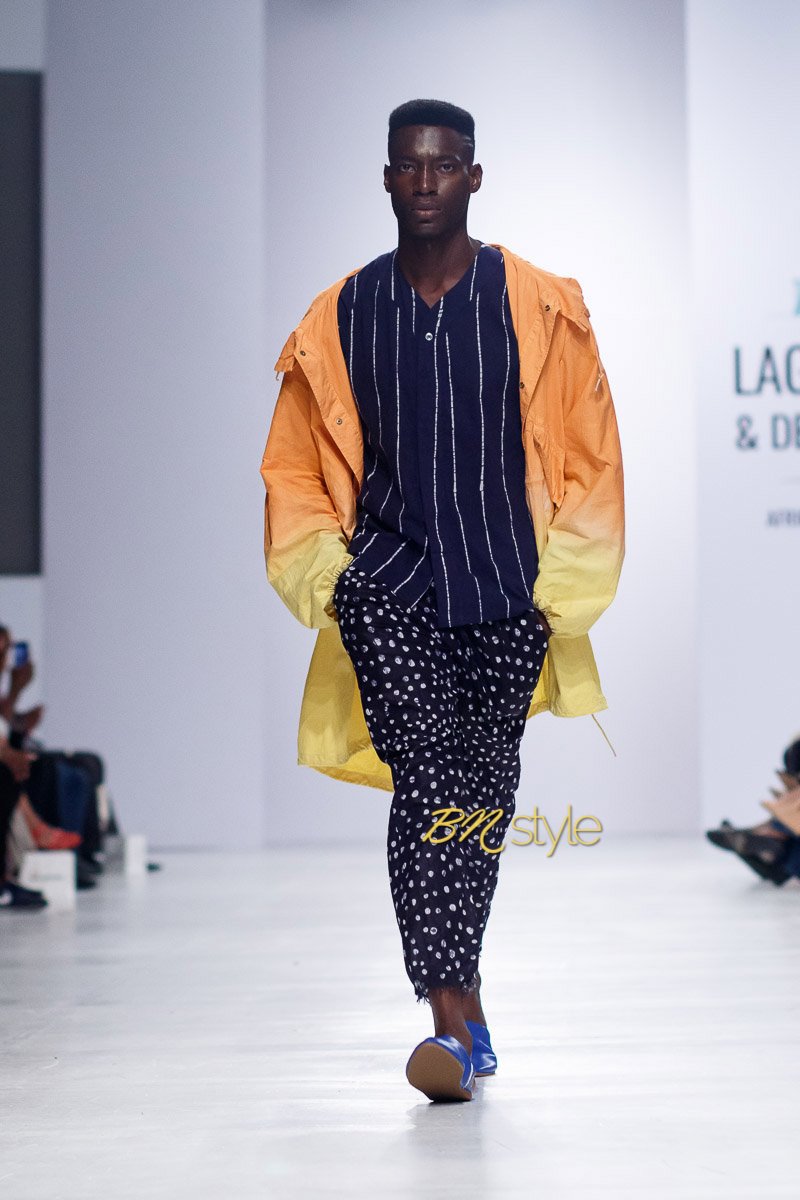 Star showing from menswear definitely went to Orange Culture, and no that has nothing to do with the fact that creative director Adebayo Oke-Lawal might just be one of the most loved individual in the industry. Summing up any of Bayo’s collections briefly is always a task because like that other mega- feted designer, Alessandro Michele of Gucci, he throws in so many references and themes and is fearless in the execution of his vision. Reframing masculinity was also a theme in his collection, with a silhouette and flourishes that one would conventionally anticipate in women’s wear. A pussy bow on a green men’s shirt didn’t look like the remainders in drag-queen’s wardrobe, just softer take on a conventional shirt. 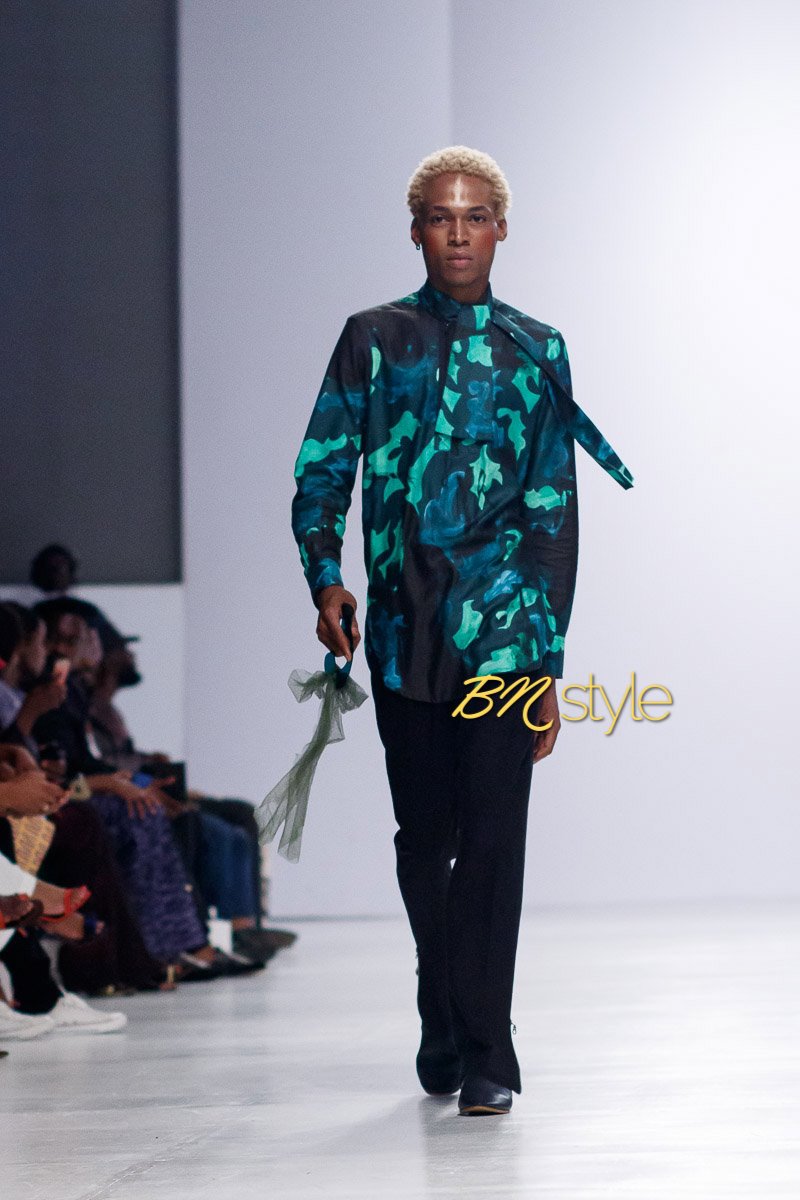 The same too could be said the lattice cutouts on a white shirt and the dove grey print dress that could sit in a men’s or a women’s collection. For Bayo having an either-or approach to dressing is dated and limiting. Transparent coats were inspired – after all when clothes look this good why cover them up? And the denim trouser with a mega turn up that was wavy? This is a piece sure to have fans and imitators in the coming weeks. When you are a star you can afford to experiment and jumbo ear cuffs and vinyl electric blue trousers strangely felt appropriate. “Trust” was emblazoned on many pieces and that we most definitely do. 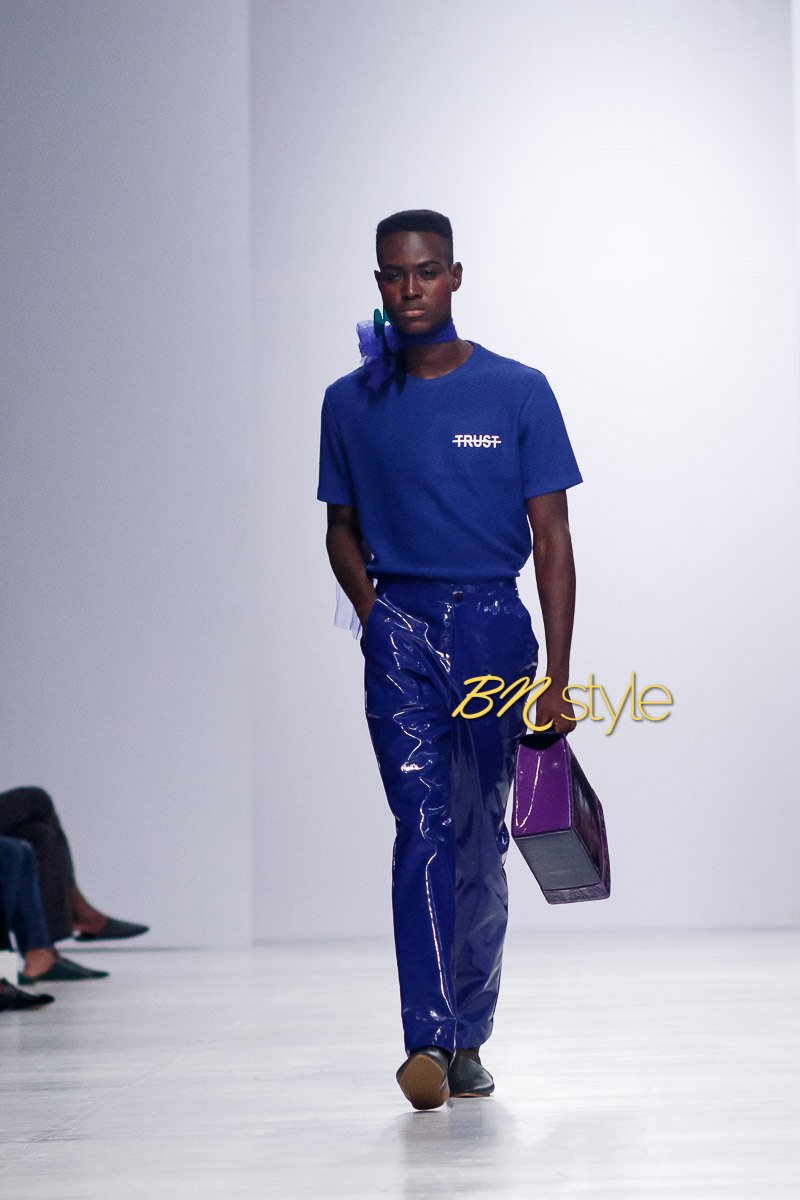 “I will know I have arrived when I am head to toe in Tiffany Amber Culture”. Trite that may sound, but luxury is born from aspiration and this collection was aspiration with a capital A. Taking Adire as her anchor point she sent what can only be best described as ‘Grand Madam Attire’ of the most sophisticated kind. The pop of red gele and the mega tassle earrings illustrated that the TA Culture babe was proudly Naija and confident in her choices. Further luxe motifs included fur and ostrich plumes on cuffs, bugle beads on shoulders, wide woven belts and voluminous silk chiffon sleeves that were definitely not made for public transport. 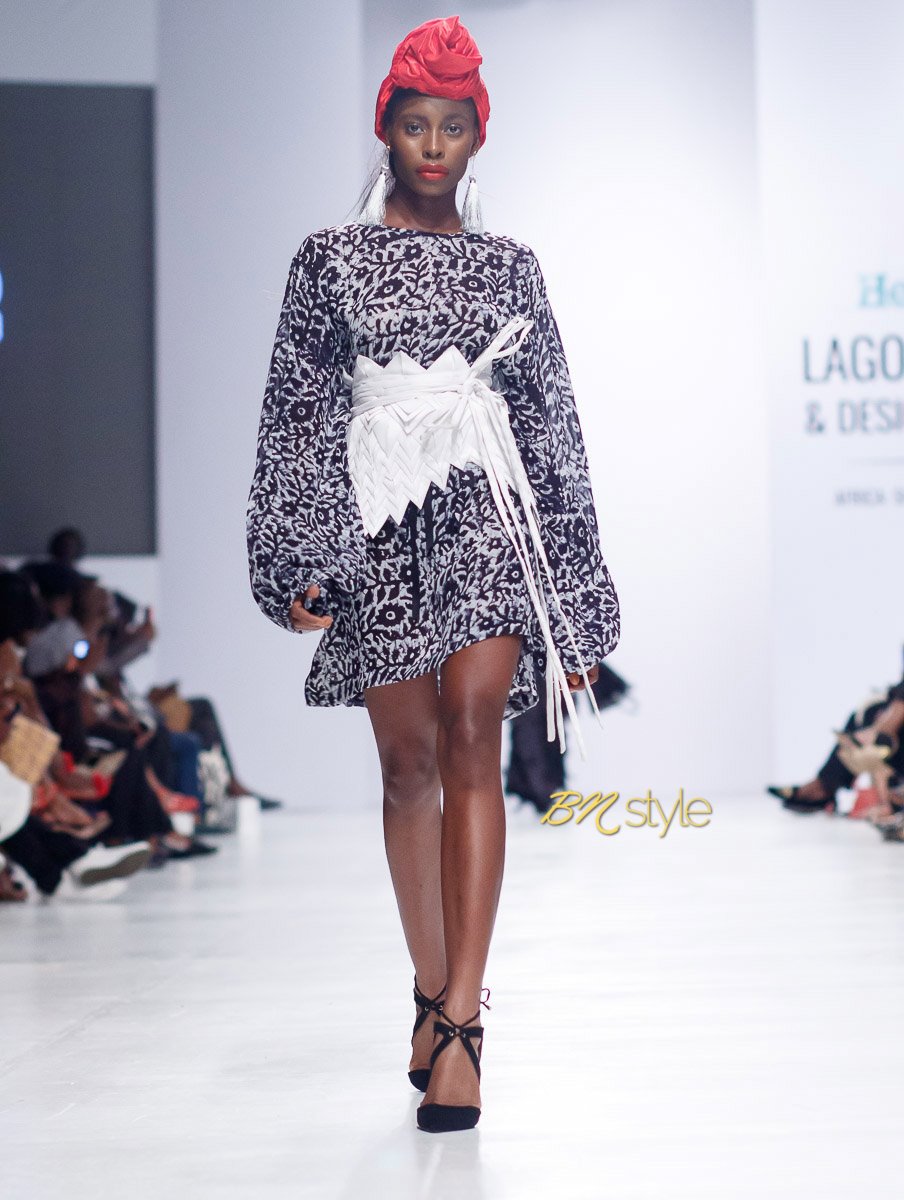 But onto the evening’s shutdowns-of- shutdowns which may have not technically been the closing show but in terms of concept and execution definitely was unimpeachable; that honour goes to Lisa Folawiyo. From the opening bars of music that were old-school percussion teamed with woodwind instruments, we were schooled in Igbo culture the LF Studio edition. Isi Agu, the lion head print traditionally worn by Igbo men was re-imagined in a custom silk print that came in different colour iterations. As Lisa is the de facto Queen of Print, she contrasted it with a pattern found in traditional hats. When it came to evening, our lions were roaring with beading around their mouths to depict their stylish tumult and bring necessary glamour to pieces. 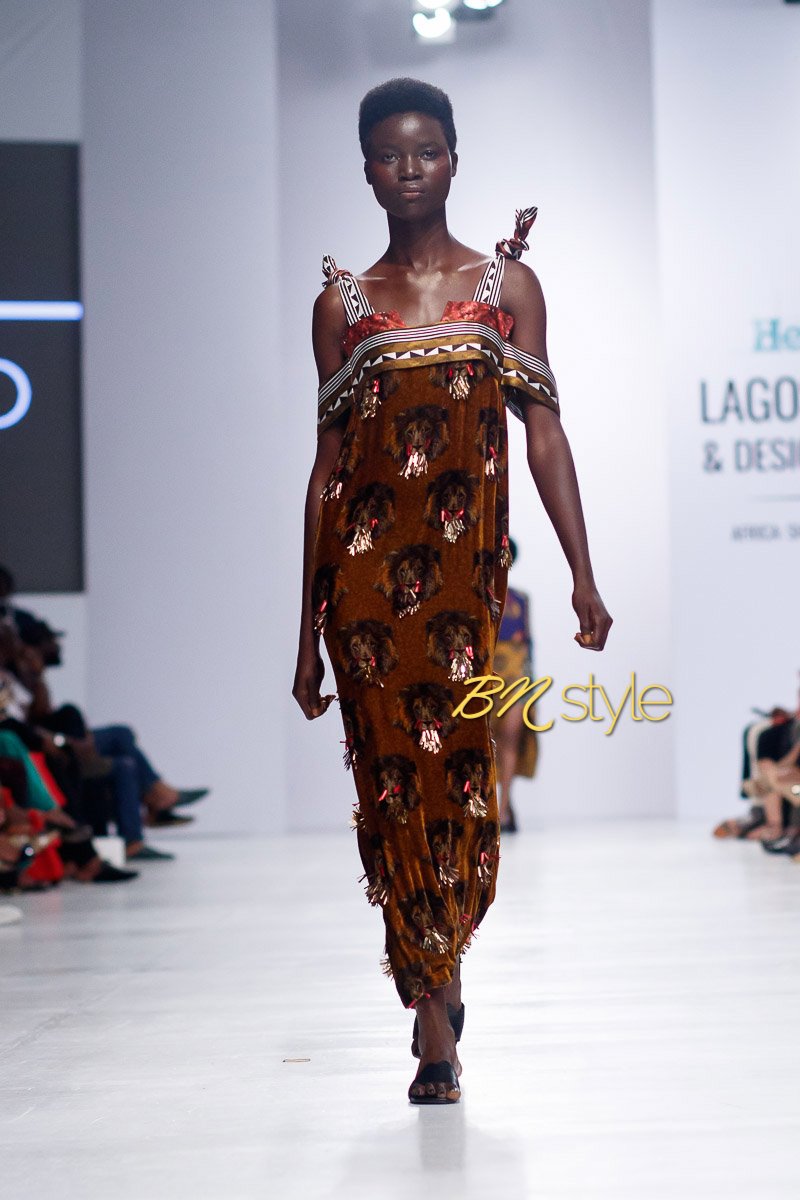 Double wrapper needn’t be a bulky figure disguising item especially when the second fabric, is you guessed it contrasting and the blouse peaks through at the hip. A pinafore dress was teamed with a rich velvet Isi Agu, you know, the type the village elders wear to set the world to rights but that now, one can wear over cocktails and canapés. Even the head ties were small and neat in contrast to Yoruba maximalism. 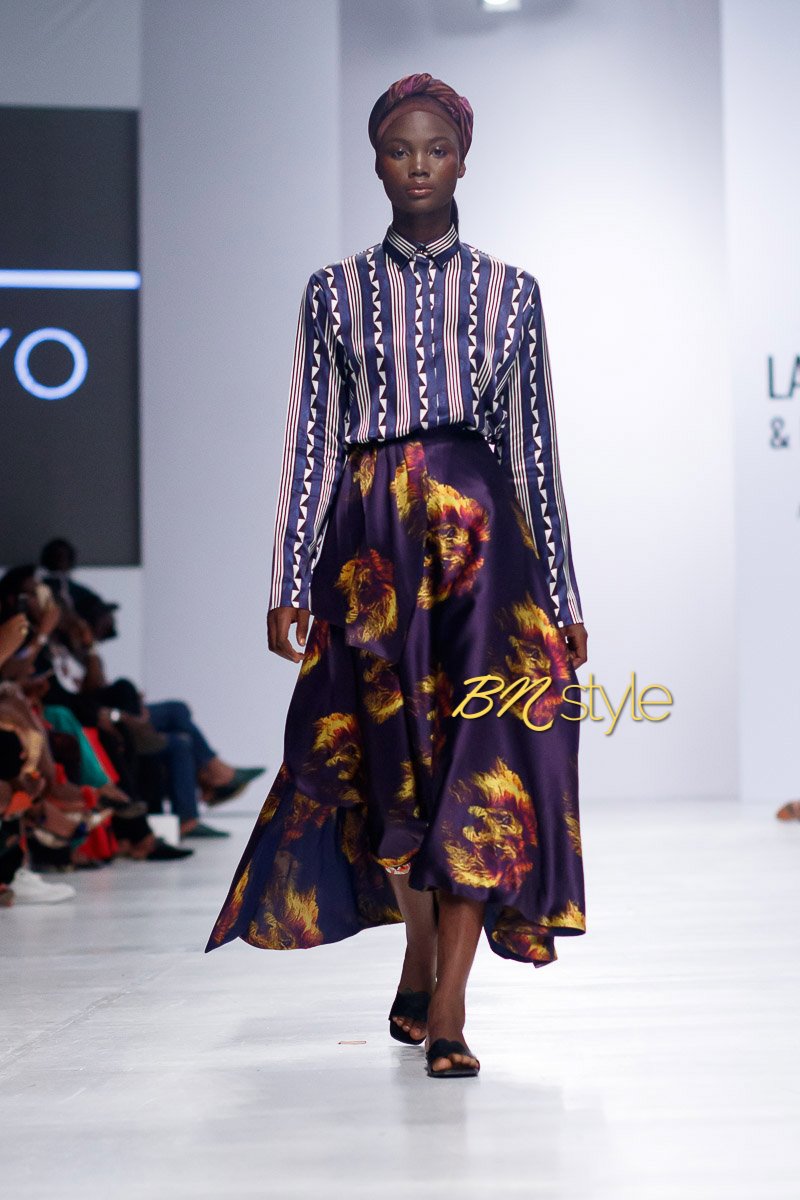 The silhouettes were simple, lean and fluid, these were clothes for women who were on the move and making moves, just like the female traders who are the cornerstone of the economy. As she took her bow to thunderous applause, an involuntary tear escaped me. Because that is what happens when fashion empowers, inspires and gives you clothes that reflect your sense of purpose.

Lancôme Teint Idole Foundation Could Be Yours! Enter this Giveaway to Win