It’s TODAY! Here’s Everything You Need To Know About this Year’s BellaNaija Style Digital Summit

This year’s BellaNaija Style Digital Summit will build on the success of the 2020 and 2021 editions which featured heavyweights from various spheres of Africa’s creative industry including Omoyemi Akerele, Roberta Annan, Oluwatosin Ogundadegbe, Nkwo Onwuka, Peju Famojure, Dami Olukoya among others.

BellaNaija Style will again convene highly influential African game-changers on the continent and in the diaspora to discuss next-level panel discussions around the intersection of fashion and film, Africa’s beauty industry boom as well as navigating new technological frontiers for Africa’s creative industries. 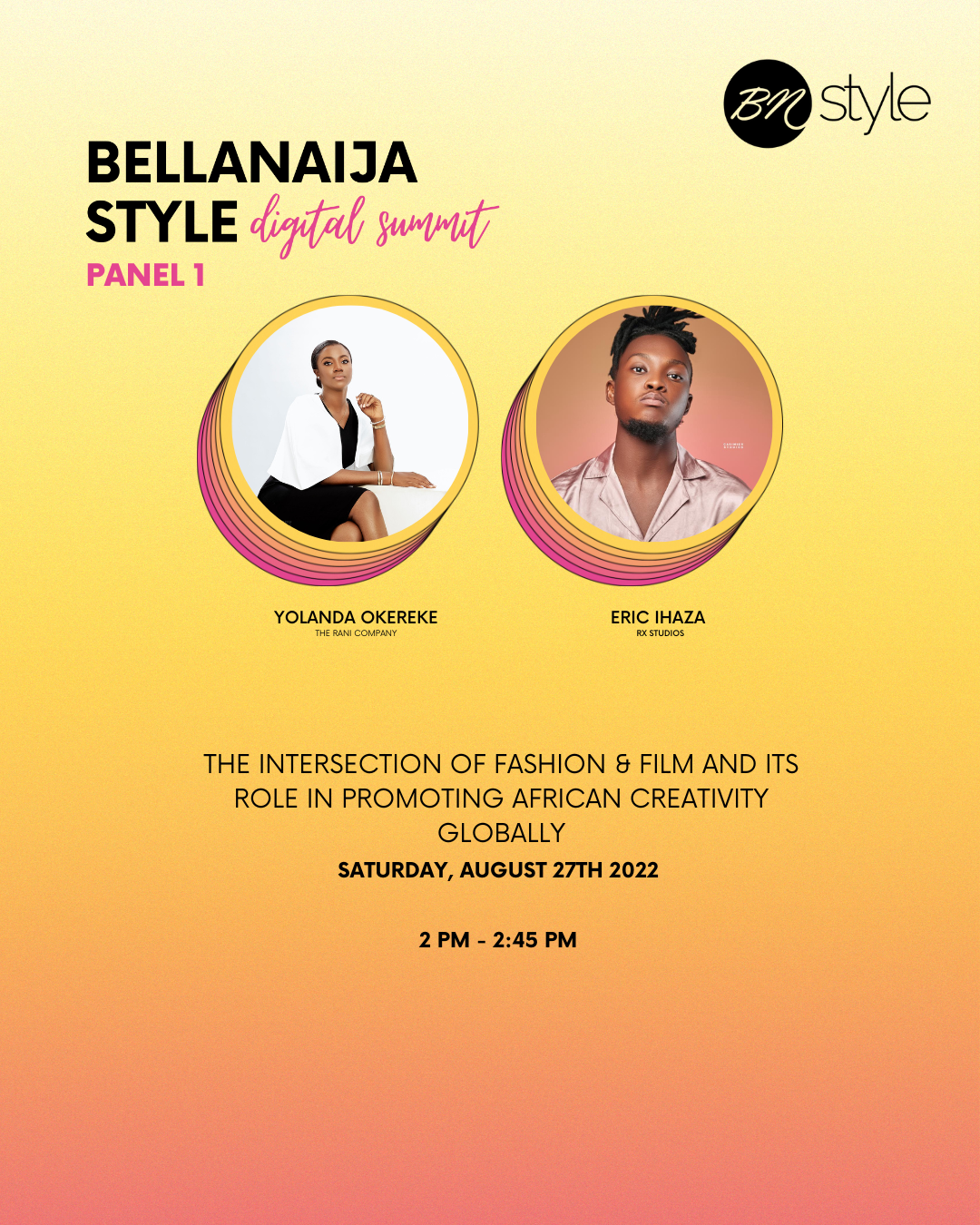 Few creative mediums go together quite like fashion and film. Throughout history, the film industry has contributed significantly to the promotion and representation of fashion. The relationship between fashion and film is a two-way process— fashion designers get involved in films to showcase their designs and perhaps influence viewers, while filmmakers use the style set to convey their story.

However, while we have a lot of skills, we don’t have a lot of infrastructure. The continent is brimming with young talent, but the resources and infrastructure needed for creatives to stay relevant while sustaining a profitable and long-term profession are lacking. How best can we maximize these new platforms to promote African creativity globally? 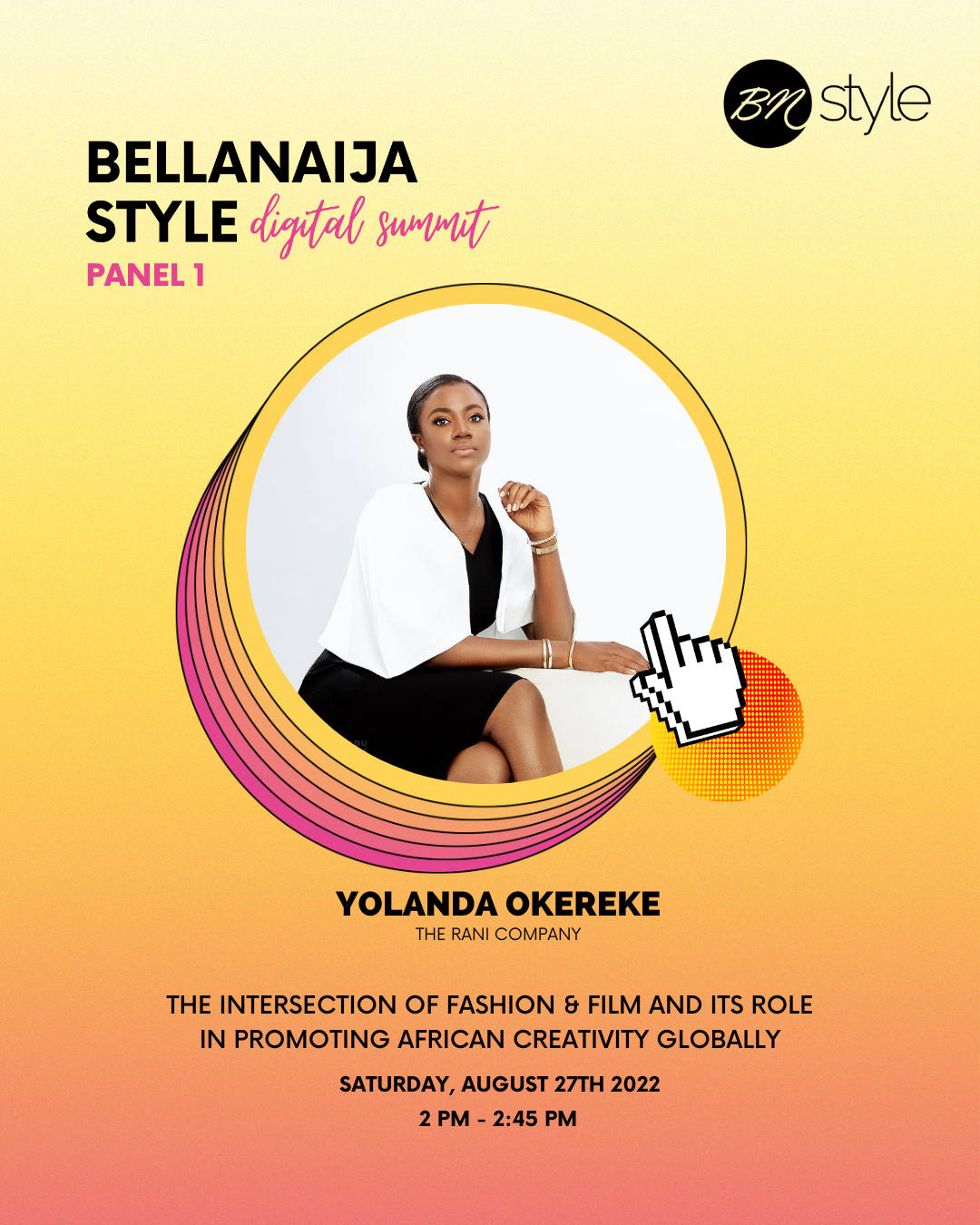 Yolanda Okereke is an independent Costume Designer for Film and Television, and a Fashion Entrepreneur and Stylist. A graduate of Chemical Engineering. Best known as the Fashion Engineer a.k.a. The Fixer.

Her foray into the industry began in 2005 when as an actress in a movie titled Sting she styled herself for the role and also helped to put together the looks of the other actors on set so they could look the part.

This opened her world to designing and making clothes as she soon started her own label called Rani Gisele while still in University.  But that wasn’t enough, she caught the styling bug and launched a new career in Fashion Styling, which then took her on a journey back to her first love, Filmmaking and becoming Nollywood‘s Foremost and Renowned Costume Designer.

She currently runs 2 companies: The Rani Company – the costume design and styling company and The Wardrobe Shack – a costume/wardrobe rental store.

The Wedding Party  (which premiered at TIFF 2016) & The Wedding Party 2, The Ghost And The House Of Truth an independent feature film produced by Temple Productions & Ego Boyo Films (directed by Akin Omotosho), starring Kate Henshaw & Fabian Lojede. MTV Shuga Season 6, directed by Tolu Ajayi, Tope Oshin and Ishaya Bako, and the much anticipated Oloture produced by Ebony Life Films talking about Women Trafficking and the world of prostitution in Nigeria. These and many other phenomenal movies to her credit. She recently represented Nigeria at the Essence Film Festival 2022 in New Orleans, United States of America. 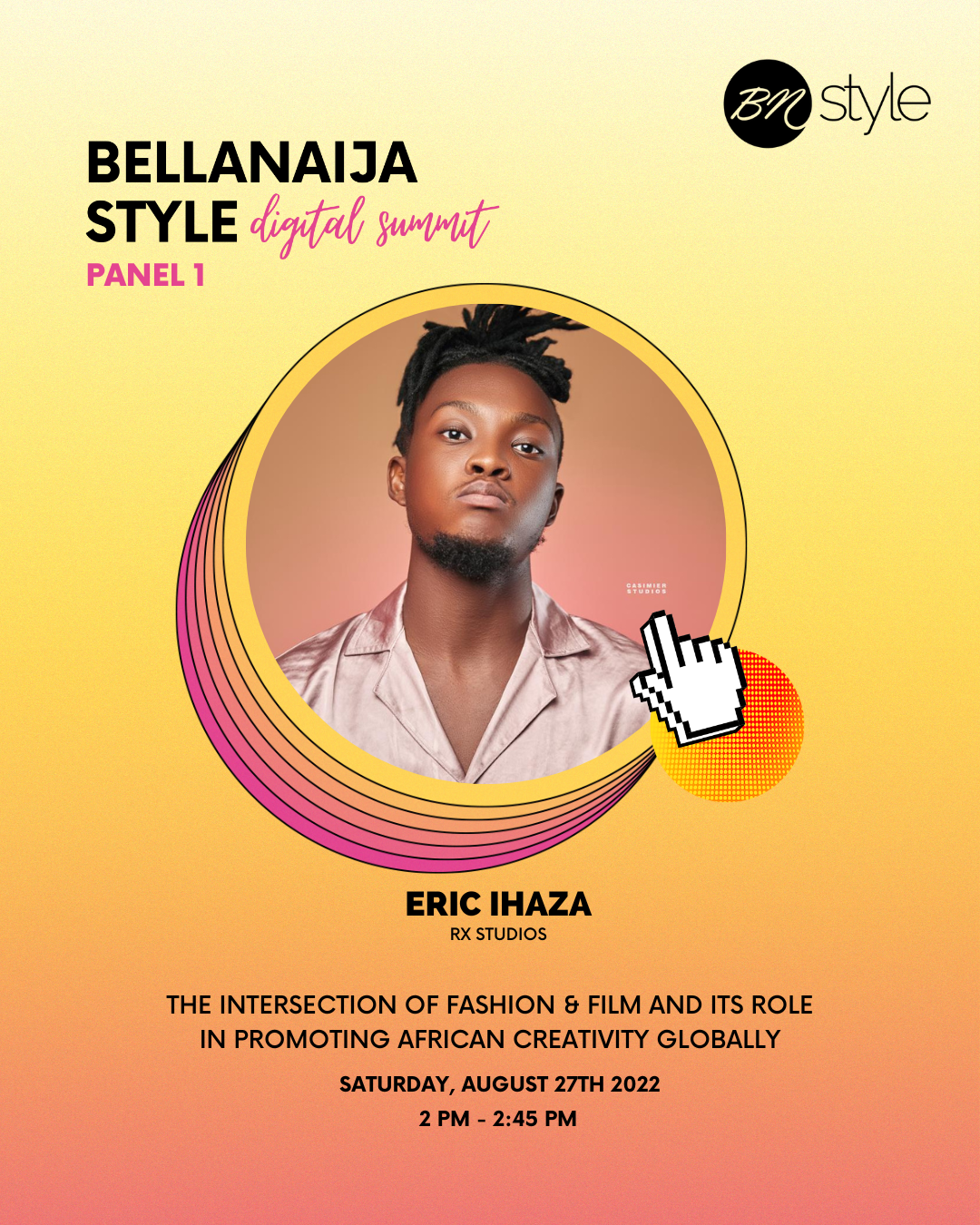 He has worked on several notable projects, TV & films like Battle of The Year 2022, The Perfect Arrangement, Gangs of Lagos, The Smart Money Woman and more. His work also spans TVCs for brands like Trophy, Bigi, Fearless, UBA, Access Bank, Investment One and with celebrities like Teni the Entertainer, Simi, Ebuka, Tuface, Kaylah Oniwo, Seyi Shay and countless others…

Fashion & Technology in Africa: Production, Consumption & Everything in Between 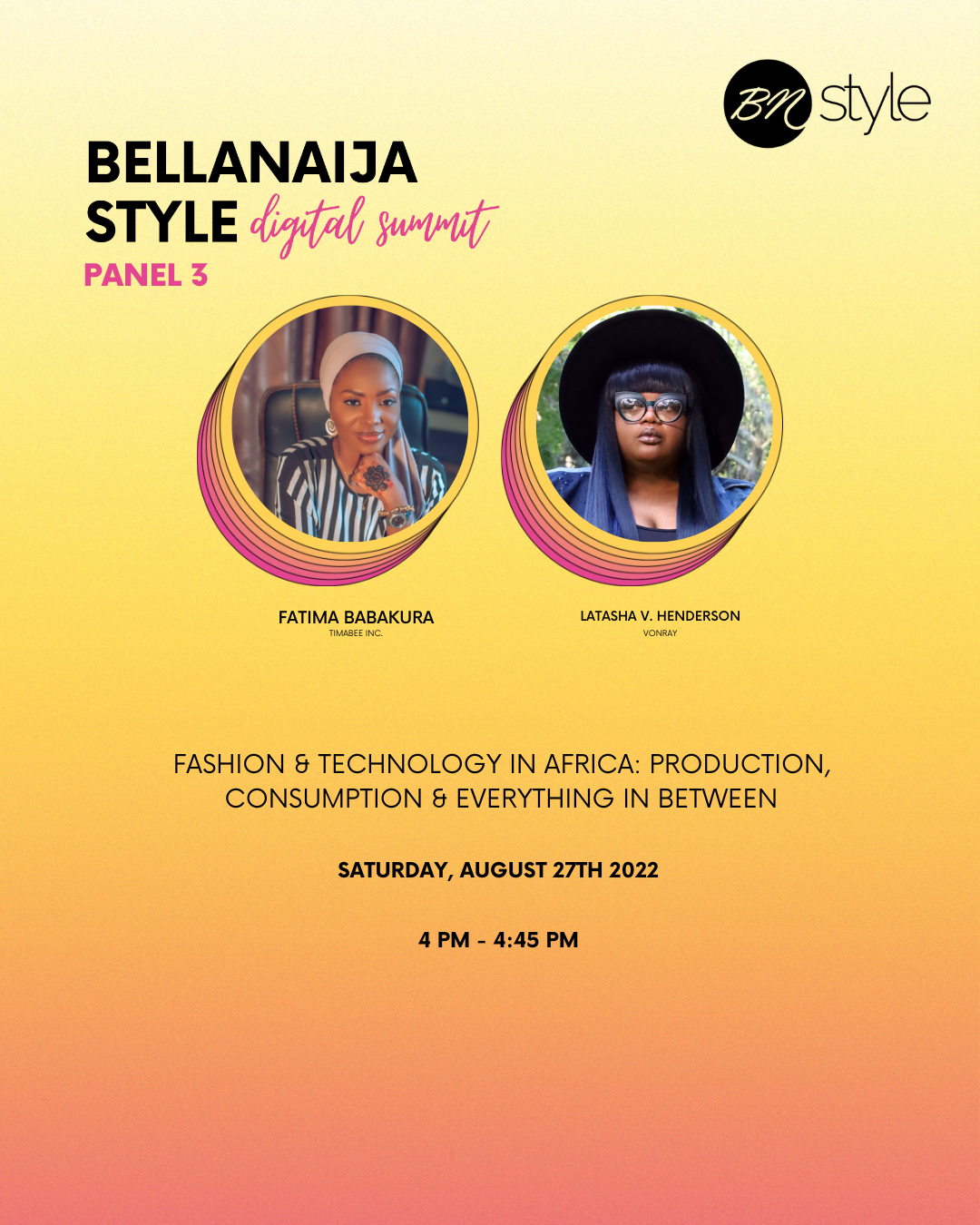 From sewing machines to e-commerce, fashion has always been at the forefront of innovation. The fashion sector is also one of the largest industries in the world, estimated to be worth more than $3T by the end of the decade, according to CB Insights
Industry Analyst Consensus.

While the west has an array of innovations — robots that sew and cut fabric, AI algorithms that predict style trends, virtual reality clothes and so on. Africa is still far behind and has to face a long-overdue reckoning with its environmental and social impact and reexamine processes across the value chain in an attempt to reinvent itself.

In this panel, we dive into the trends reshaping how our clothes and accessories are designed, manufactured, consumed, distributed, and marketed. 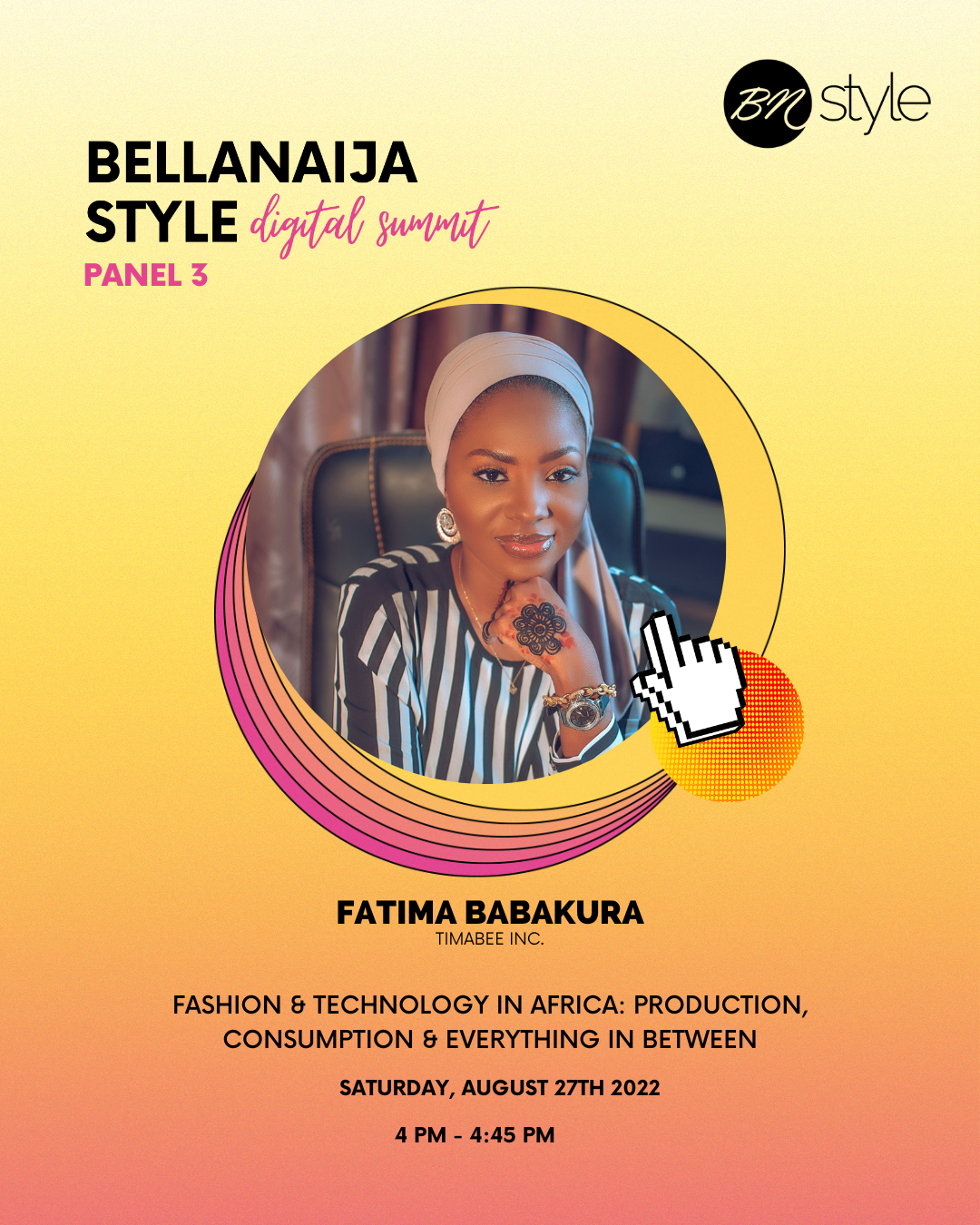 Fatima Babakura is the Creative Director and Founder of Timabee Inc. Timabee is a premium women’s accessories brand. Fatima founded Timabee at 19, and the brand has since grown to become a global brand with customers worldwide.

Fatima holds a Bsc honours Commerce degree from Canada’s prestigious Mcmaster University. Fatima has won multiple awards, including being listed as Nigeria’s top 100 Most Inspiring Women, WEF’s Iconic Woman in 2017, Forbes 30 under 30 and nominated for prestigious awards like the MAX Group Canada Entrepreneur of the year award in 2019, to list a few. Fatima is passionate about entrepreneurship, and her dream is to start an entrepreneurship mentorship program for younger women globally. 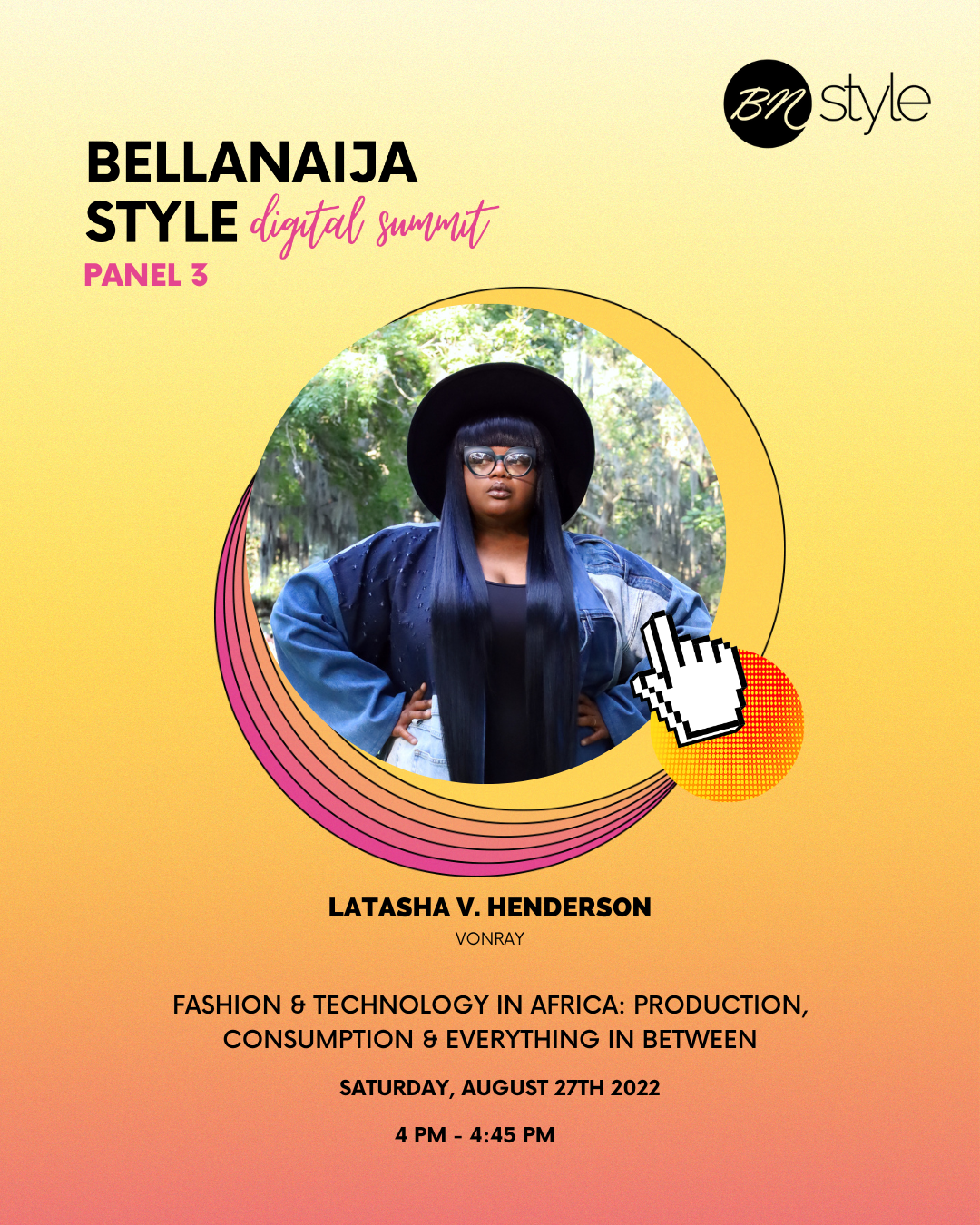 Attitude is the little thing that makes a big difference. For over 2 decades, Designer Tasha has adopted a positive attitude that has translated to success in fashion when all odds were against her.

Most recently, Tasha appeared on season 15 of Project Runway, an American reality television series and competition that chronicles the journeys of fashion designers in full competition with each other.

One would wonder how she has time to achieve so much individually, but her past struggles and passion drives her success. 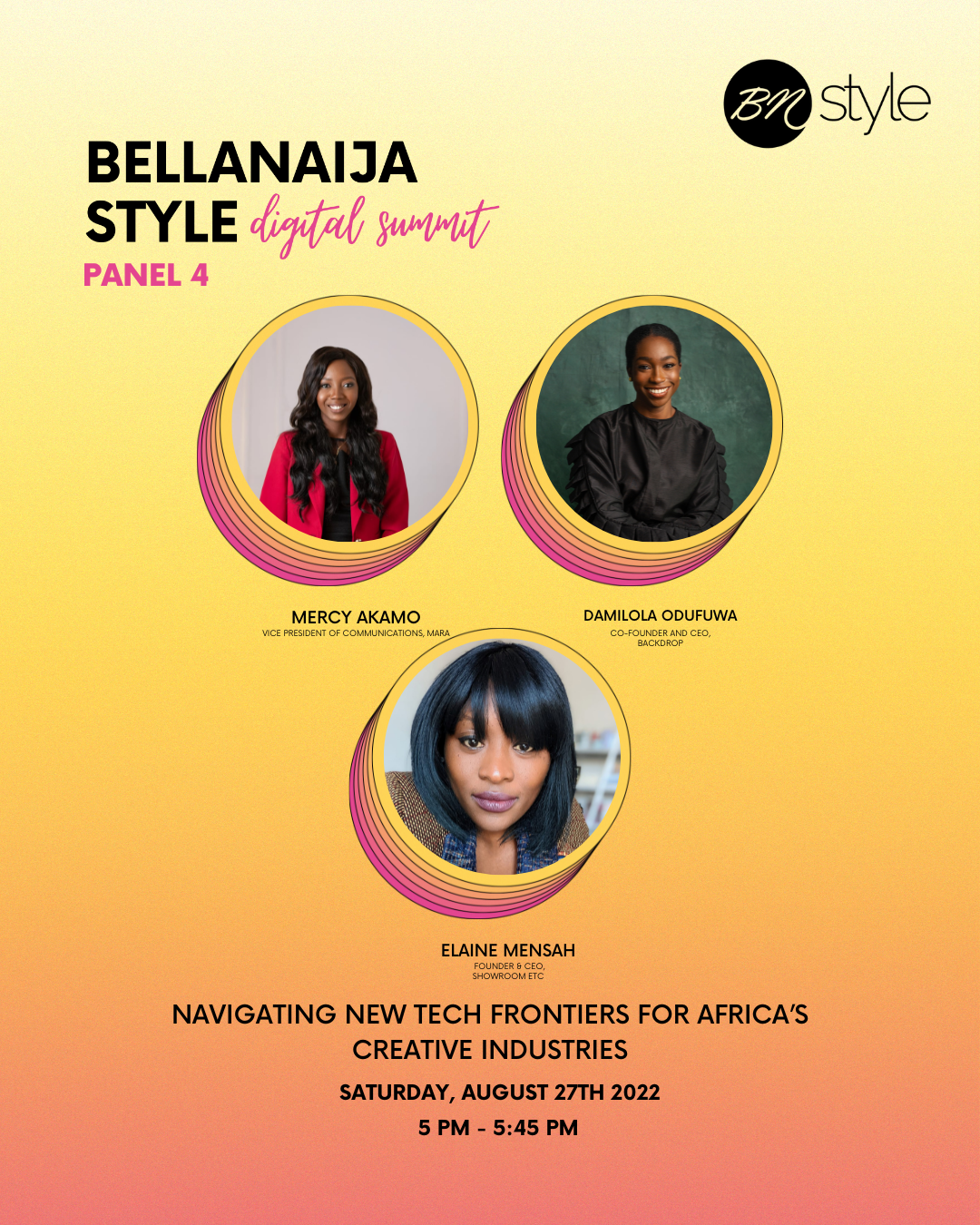 With the introduction of new digital technologies and, more recently, developments in robotics and artificial intelligence, the world is undergoing a digital revolution.

The digital revolution has ushered in new ways of thinking about work, with far-reaching implications for business and social activities in various disciplines and industries. And the creative industry is one of them.

But how can the creative sector effectively exploit these benefits, and what roles can creatives play? It is no longer enough to be creative. Creatives must actively pursue new ways to mine their abilities for extensive reach, profit, and impact.

The proliferation of technology has made it possible for consumers of creative content to make demands and seek greater control over what and how they consume content. They demand customised content to suit their specific and constantly evolving needs. These barriers and opportunities are the topics we will bring to the fore on this panel. 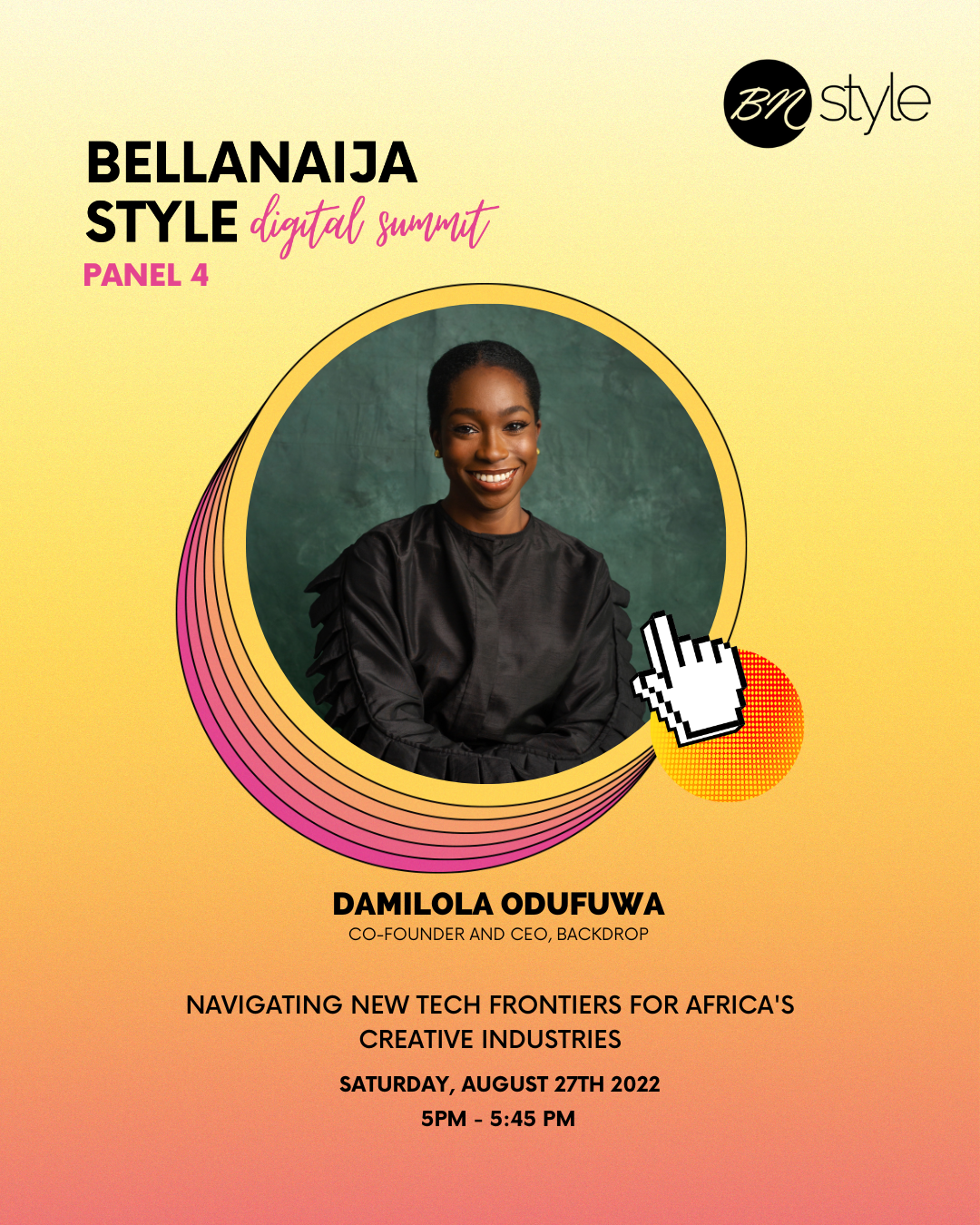 Damilola Odufuwa is a tech executive and women’s rights advocate whose work intersects tech, communications and women’s rights. She is the co-founder of Backdrop, an app and social network that lets people find and share beautiful spaces around the world and the co-founder of the Feminist Coalition, an advocacy group made up of 13 feminists championing equality for women in Nigerian society – with a core focus on education, financial freedom and representation of women in public office. Previously Damilola worked at Binance, the world’s largest crypto exchange, as the head of Product Communications. Prior to this, she was the Head of PR for Africa at Binance.

In recognition of her women’s rights advocacy, Damilola has been listed as one of the Bloomberg50, a record of people changing the global business landscape, one of the “12 Women Leaders That Changed The World In 2020” by Vogue and one of the TIME100 Next 2021.
In December 2020, Damilola emerged as the winner of ‘The Future Awards Prize for Leading Conversation’ – an award given to a young person who is constantly driving positive conversations and shaping the culture.
As a result of her impact on the tech industry, Damilola was also listed as one of 6 Women At The Forefront Of West Africa’s Tech Boom by Vogue and as one of the “Rising Women In Crypto” by Fintech Times and Wirex. Previously, Damilola worked as editor-in-chief at Zikoko and Konbini, and as a social producer at CNN Africa.

Damilola has a BSc in Financial Economics and an MSc in International Finance and Economic Development from the University of Kent, Canterbury. 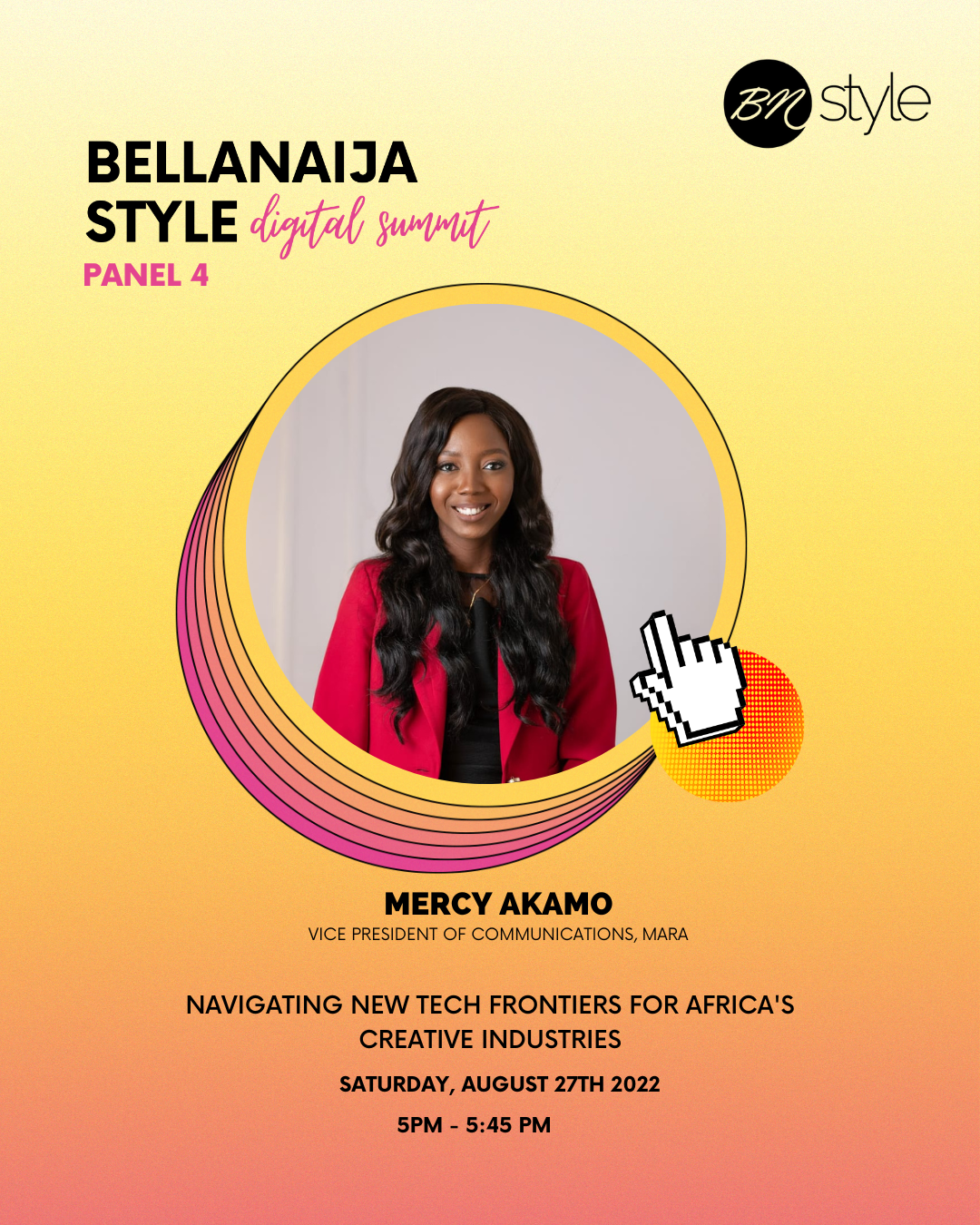 Mercy Akamo is the Vice President of Communications at @themaraverse, a Pan-African blockchain platform focused on increasing the number of Africans who can gain financial empowerment and freedom through blockchain technology. She is a communications specialist with years of experience in the media and experiential industry. She is the founder of the Africa Teens Summit.

Mercy was the Head of Content and Innovation at Bella Online Media. Africa’s number one digital destination for entertainment, lifestyle and wedding content, where she oversaw editorial operations and content for BN’s largest brand – BellaNaija Weddings. Her industry experience in digital marketing, content creation, insight & intelligence gathering, media reporting and monitoring makes her an industry leader in Africa.

Mercy has worked in Africa’s largest conglomerates – Dangote Industries Limited and has built her career over the last years working in leading corporations. Mercy is also a TEDx Ambassador in Africa and the convener of TEDxLagos– a TEDx conference that promotes ideas from the continent. 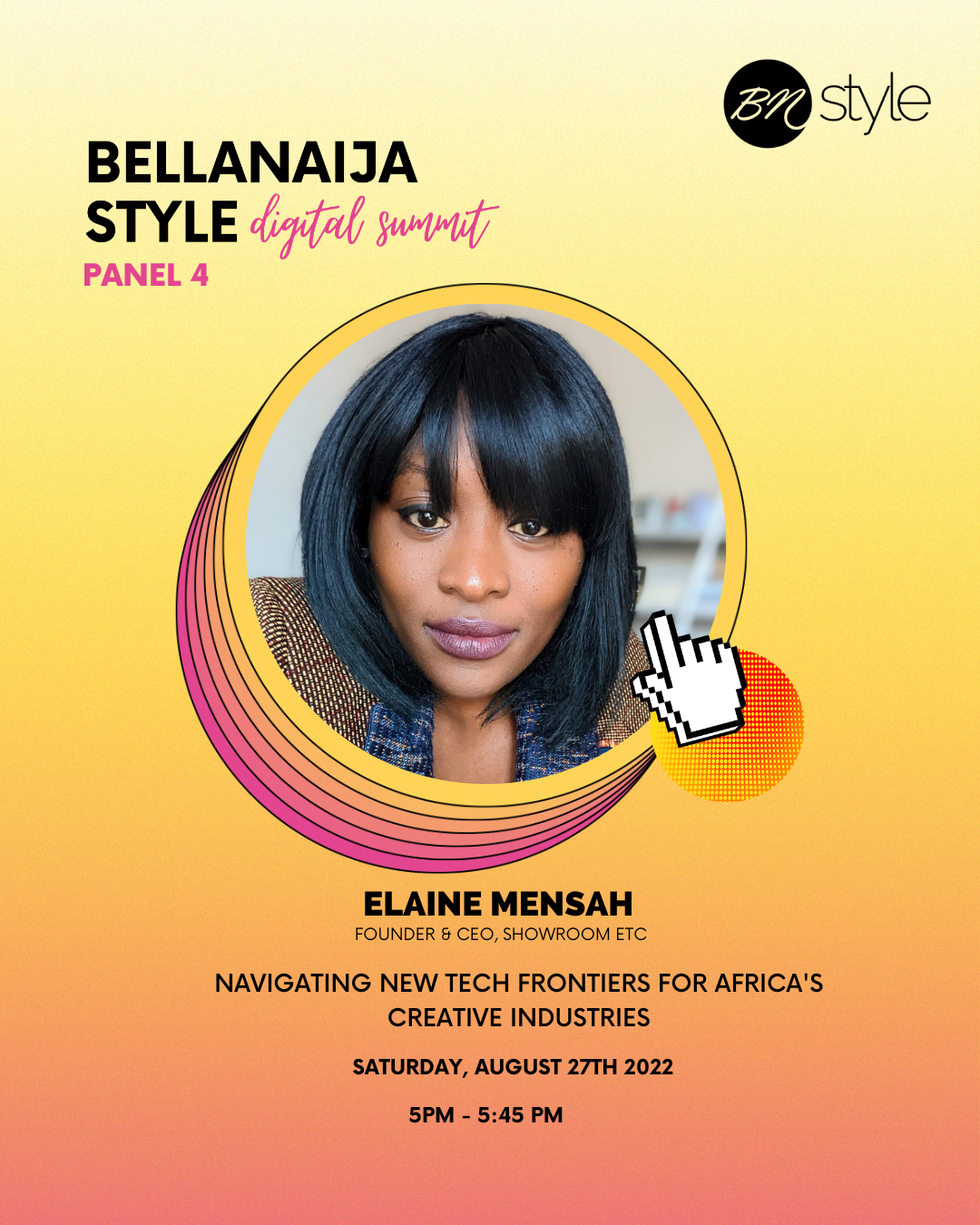 A natural at conceptualizing creative ideas, Elaine has worked with brands large and small across industries to elevate their presence and position in the market. She specializes in brand positioning, scaling & global growth, designer & product collaborations, strategic partnerships, and representation in entertainment.

This Is Why Naomi Campbell, Sissi Johnson & Folake Coker Think Now is the Time for The African Fashion Industry