Africa’s largest tech and digital media event Social Media Week begins on the 4th of February 2018 and BellaNaija Style will be hosting a panel on the 7th of February titled “The Democratisation of Fashion: New Media, Storytelling & The Role of Technology in the African Fashion Industry” – a panel discussion with 3 industry leaders in the country at #SMWxBNSTYLE19.

Meet one of our panellists- Toju Foyeh 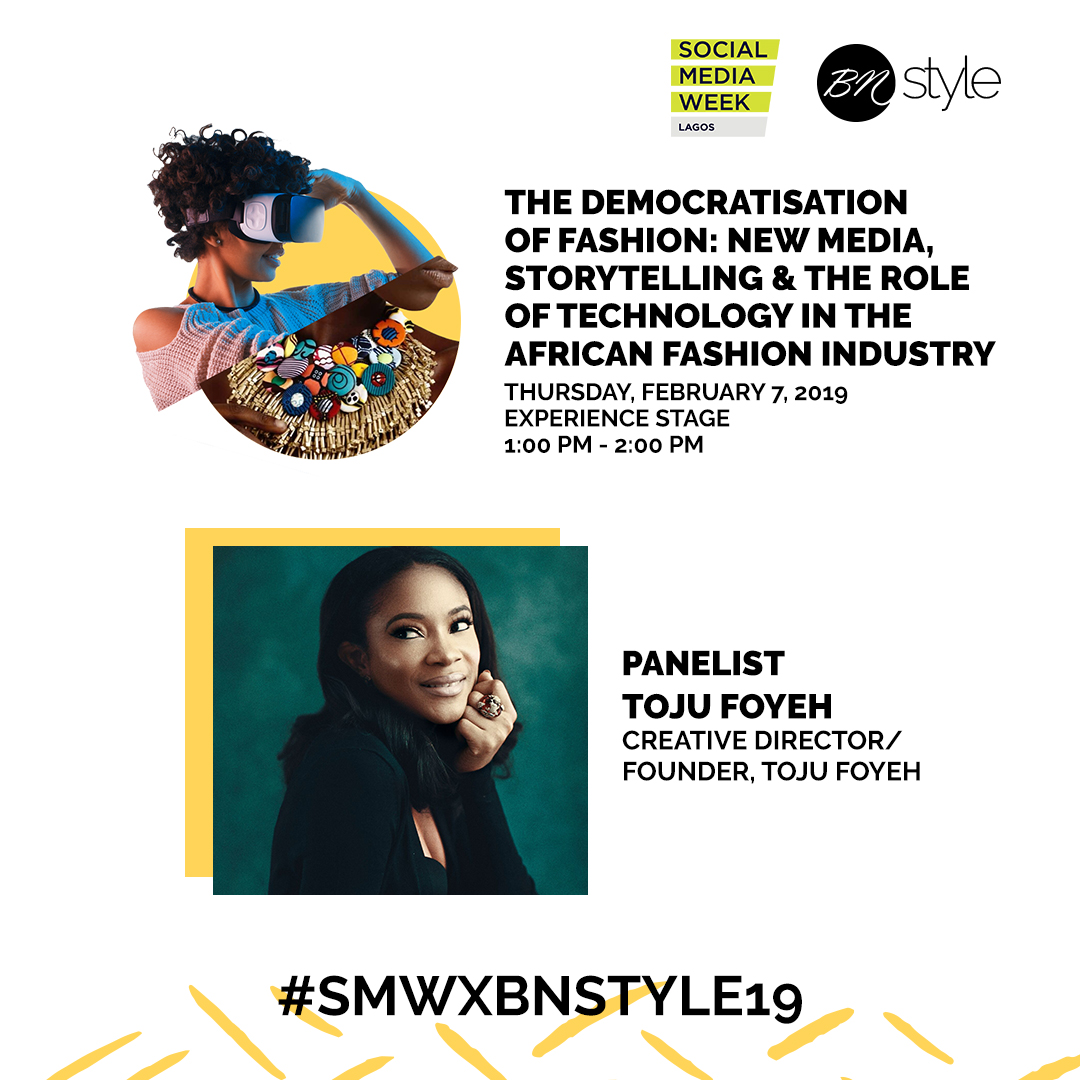 Toluwaloju Olowofoyeku (Toju Foyeh) developed a keen interest in fashion from a young age. Growing up, she was surrounded by several family members who were involved somehow in the fashion/dressmaking industry including her parents who started a clothing line as a young couple.  Toju obtained an LLB (Bachelors of Law) from the University Of Reading, the United Kingdom 2008, and an LLM (Masters of Law) from the University of Manchester, United Kingdom 2009. She then decided that the time was right to follow her passion by enrolling for the Fashion Design degree program at the world famous Instituto Marangoni in Milan before finally launching her clothing line after graduating in 2012.

As her brand grew, she was invited to participate in the Arise Magazine Fashion Week Lagos 2011 and 2012, New York Fashion Week 2012 and was subsequently noticed as a designer to watch after being awarded the ‘Future Awards Africa Fashion Designer of the Year’ in 2012. With hard work and perseverance, the Toju Foyeh brand became a favourite amongst celebrities in Nigeria (Tiwa Savage, Agbani Darego, Betty Irabor, Osas Ajibade to name a few). The brand has also partnered with South African style icon Bonang Matheba and other public figures from SA; Nomzamo Mbatha, the First Lady of South Africa Her Excellency Bongi Ngema-Zuma among others.

Toju’s increased passion and drive to inspire and empower the youth and upcoming designers has motivated her to start her own fashion academy which will be launched within the next few years. In addition to world-class teaching, the academy will offer scholarships as well as stipends for underprivileged students. In so doing the Academy will play its part in nurturing and developing Nigeria’s future crop of aspiring and cutting edge designers. The future is indeed looking exciting for the Toju Foyeh brand!

The TF brand has received a host of ground-breaking awards other awards including more recently:

The TF brand has also received recognition from various international brands in the form of partnerships. Some of which include:

In a hyper-connected digital age, it can be a challenge for brands to tell their stories and cut through the noise with clarity and credibility. Add in a broken distribution system, a news cycle that moves at warp speed and heated political and social climate – social media can feel fraught with peril for both established and emerging brands.

We intend to discuss with Toju Foyeh and other creative fashion leaders who have mastered the elusive balance between technology and fashion and are at the forefront of shaping the industry’s future.

Nomzamo Mbatha is KOKO Magazine’s Woman of The Year 2017