Don’t Miss This Trending Conversation “Break-In & Break the Mold: How To Thrive In A Unique Industry” this Saturday with Cuppy

Every week in March, BellaNaija Style will host relevant, thought-provoking conversations with African female industry leaders in the fashion, beauty and media space on @bellanaijastyle‘s Instagram Live. So mark your calendars for the ultimate #BNSConvos! 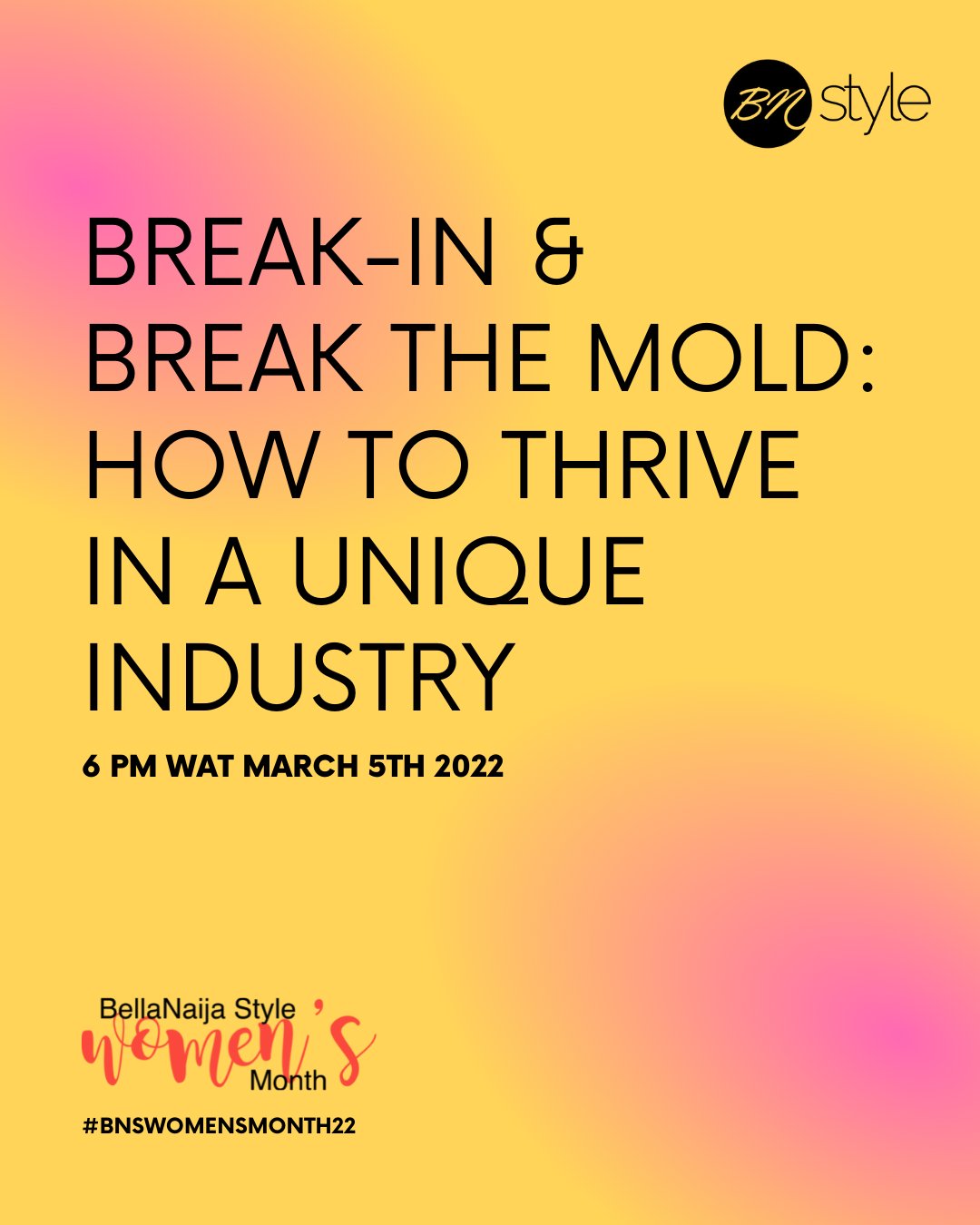 Compared to earlier generations, younger millennials are not as discriminated by gender in their jobs. However, some male-dominated occupations are still particularly susceptible to propagating harmful preconceptions and generating unfavourable situations that make it even more difficult for women to succeed. “Mans-plaining” by male colleagues, sexual harassment fears, heavy doubts around women’s technical abilities for some positions as well as negative impressions about women’s leadership abilities – are some of the challenges that stifle females in male-dominated sectors.

We invite you as our guest for this relevant topic tagged Break-In & Break the Mold: How To Thrive In A Unique Industry on Saturday, March 5th. In this exclusive interview with talented disc jockey and music producer – Florence Otedola, popularly known as Cuppy, we dissect the truths about surviving and winning in a male-dominated industry. 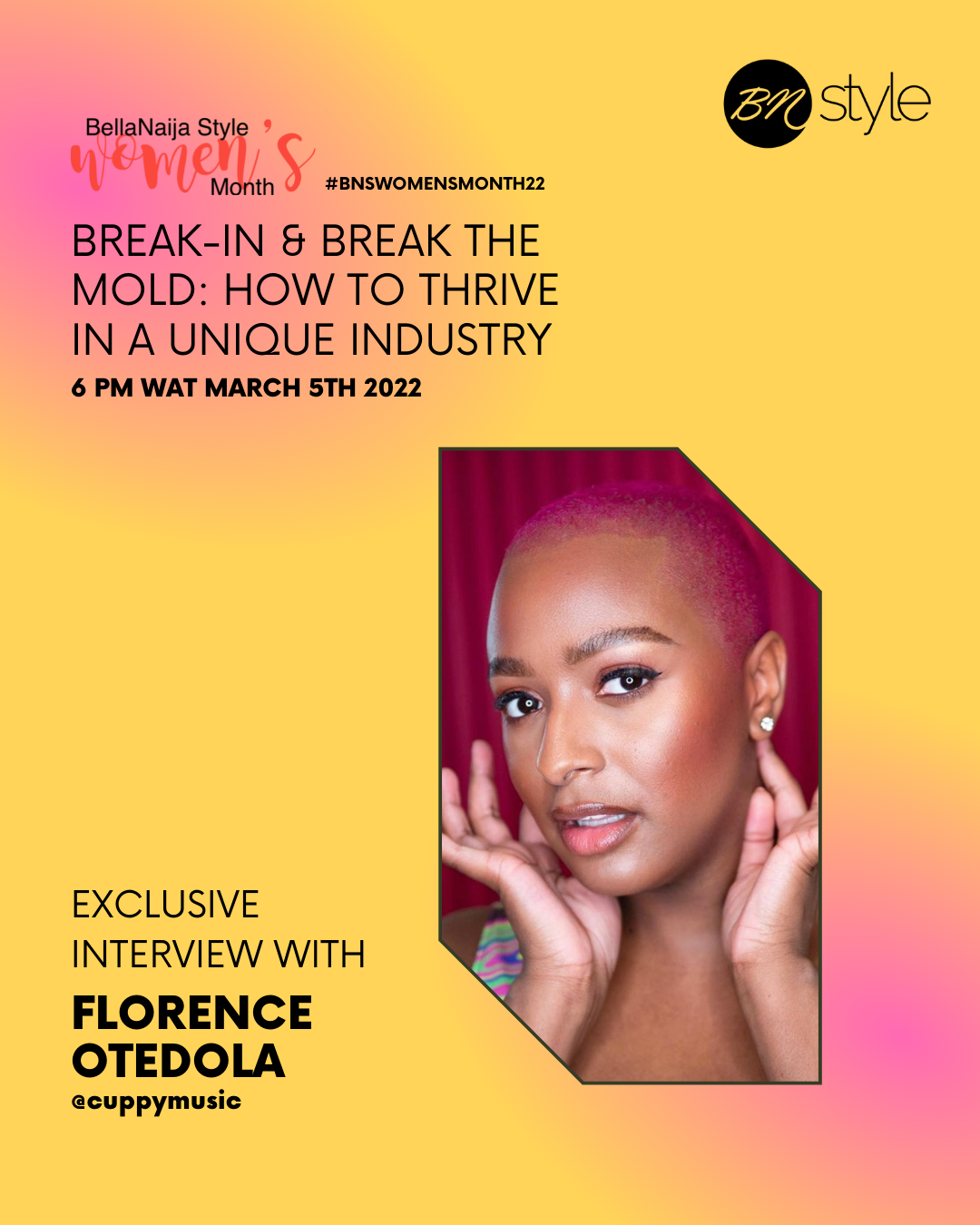 Cuppy, who was born Florence Ifeoluwa Otedola in 1992, grew up in Lagos. Moving to London at 13, while attending boarding school, Cuppy’s parents gifted the precocious teenager an iPod. She filled it with Nigerian music so she could always keep a part of home, which ignited her passion for music. Cuppy went on to learn how to DJ purely from observation.

During school holidays in Lagos, the then-16-year-old found herself at a club when the resident DJ was stuck in the kind of traffic the city is notorious for. The panicked club owner asked who could play while they waited for the DJ and Cuppy volunteered. He acquiesced and she got the party started.

She has been chasing her calling ever since. By 17, she had already become a household name by playing at some of London’s top nightclubs and events including London Fashion Week fixtures. She’s also played at well-known events in Paris, New York, and Dubai. When she’s not bossing behind the decks as a DJ, she can be found in the boardrooms as a music businesswoman and even behind the mic as a producer and vocalist.

In 2014, Cuppy was announced as Tourism Ambassador for Nigeria by the Federal Ministry for Culture and Tourism. She is currently a brand advocate fuelling the ‘Fascinating Nigeria’ campaign, which is a dynamic imprint, aimed at promoting the development of tourism. After graduating with a degree in business and economics from King’s College London, Cuppy was selected as a DJ at the MTV Africa Music Awards, having built a reputation as one of the foremost DJs in Africa.

Cuppy balanced the club and curricula effortlessly and earned a Music Business master’s degree from New York University while interning at Jay-Z’s Roc Nation imprint in 2015. That year, she appeared as the resident DJ on MTV2’s Uncommon Sense with Charlamagne tha God.

In 2021, Cuppy starred in Channel 4’s reality TV show ‘High Life’, a show focusing on the careers of British West Africans. She also as an Ambassador for Lagos SDGs Youth Alliance and starred in WhatsApp’s Nigerian Independence campaign in October. She also enrolled at the prestigious Oxford University for her second master’s degree in African Studies, which she is due to complete this summer.

Cuppy kicked off 2022 by revealing herself as the brand-new host of BBC 1Xtra’s Sunday Breakfast show, every week from 7 am-11 am, succeeding radio and TV presenter, Remi Bugz.

Tanzanian Model Flaviana Matata Speaks Candidly To ELLE About Her Personal Style, Being Passed Up For A Major Cosmetics Deal And More