Superstar fashion collaborations and more superstars on the runway were the order of the day on day two of LFDW. If you read yesterday’s review, you’ll know what how I feel about the latter, but with the former there were some definite high water-mark moments that spoke to the power of fashion to bring people together, inspire communities and offer a plethora of options for looking your optimum.

One could tell as we were milling before the shows started that the atmosphere in the tent was
excitable. Let’s just say that some designers had their squads in full force with people happy to declare which one they were here for. Things thankfully, started on time with House of Kaya, giving us a celebration of Nigerian culture from a Northern perspective.

Ibrahim Aminu illustrated how modesty needn’t be shapeless or dull and his slimline tunics in rich reds with contrasting black, mustards and the show opener, a clear ode to Nigeria which was a green and pearl-studded tunic, were pleasing on the eye and very commercial. He kept things romantic with frilled sleeves and contrasting head-ties and another simple but effective addition to his winning formula included golden headbands worn as the principal jewellery and barely there make up. His fans and existing customers will be happy and he may have one some new ones last night too.

Inclusivity, collaboration and a runway take-over of Day 2 was clearly the agenda for the #aboutthatcurvylife. After last year’s ecstatic response to the plus-size designing collective, which saw the different collections hailed both in the tent and in international publications such as Vogue, Latasha Ngwube had set the bar high in terms of expectation. Models stood in formation as Christina Aguilera’s empowerment classic Beautiful was sung acapella by Isaac Geralds, but then strutted down the runway to cheers and applause from an audience who were as much embracing the message as the clothes. ASSIAN was an interesting addition, taking up the discourse for plus size men, with a series of kaftans, and for the bold, a black and white A-Line skirt and jacket and aubergine sequinned pants. Guy-liner got a turbo-reboot with blue eye-shadow smudged in the corner and cult sneaker brand KEEX providing the footwear.

For the plus-size lady OSUARE seems the one to beat, beaded batik silks and chiffons wafted down the runway, and if one ignored the clown-town orange wigs on some of the models these were clothes that celebrated rather than hoisted and squished a larger woman’s body. 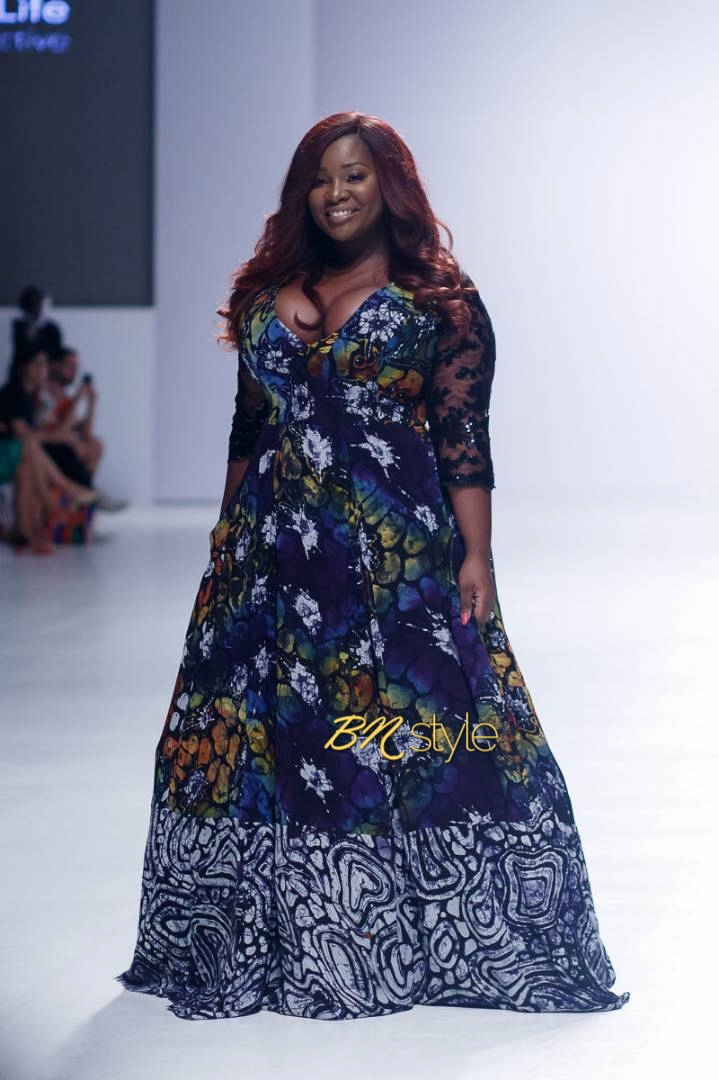 Gozel Green continued on their thesis on altered silhouettes, cut-outs and palettes of contrasting vivid colours or mono-tones which have become their trademark. However, creative director twins Sylvia Anekwe and Olivia Okoji did not rest on their laurels or recent international plaudits. The collection was everything we would want and expect from a brand that has carved a niche as the thinking fashion girl’s first port of call. Texture and layers were fine-tuned, with black fishnet peeking out of panels and one fuchsia, black and green dress destined to be an instant sell-out. It was as confident and assured as their customers. 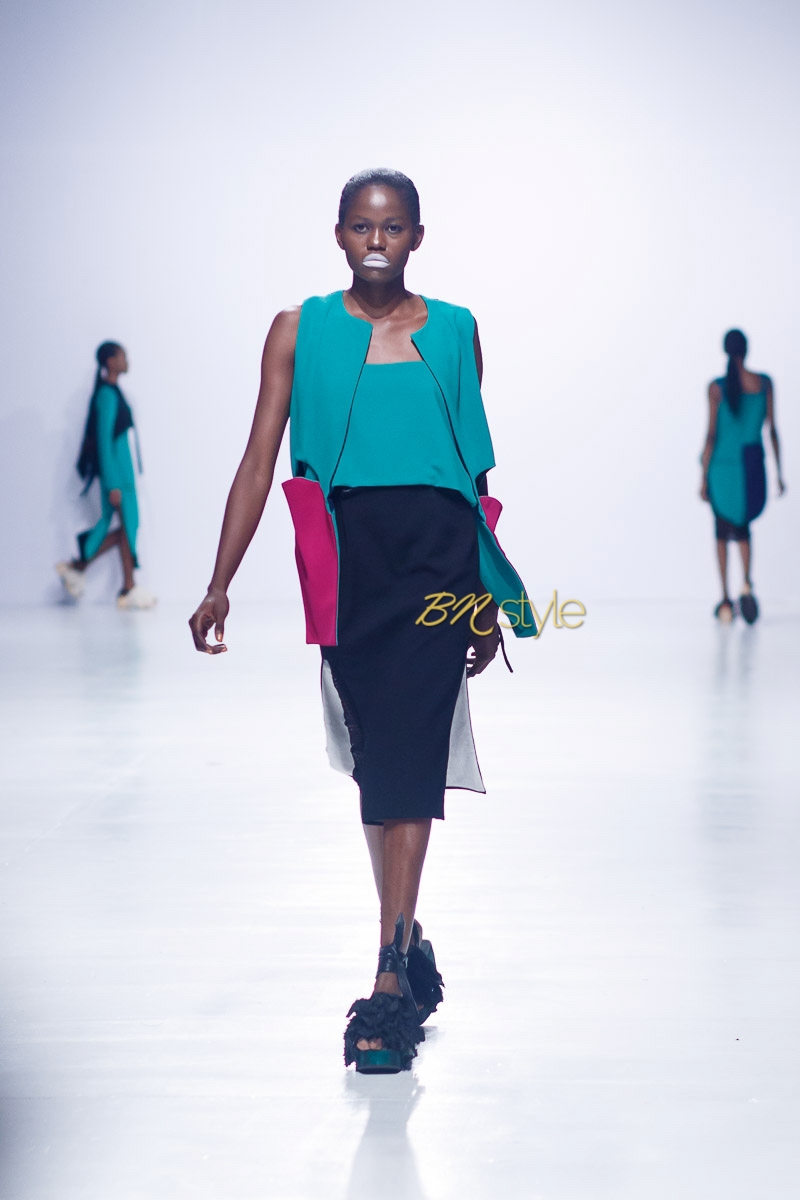 DAVIDO X ORANGE CULTURE probably got the second largest cheer of the night, aided and abetted by a catwalk bow by Davido himself. And the collection, stocked exclusively in London’s Selfridges is a milestone for the Nigerian fashion industry as a whole. However, it is also like #aboutthatcurvylife a powerful exposition on the power of collaboration and group action. Take one Nigerian superstar and things are impressive, take two and they become an unbeatable sales proposition both domestically and internationally. As for the pieces themselves, think hip-hop references in terms of the loose easy cut of both t’s, sweatshirts and pants and the shock of pink with “If’”, Davido’s mega-hit as the constant motif.

DNA by Iconic Invanity was another example of if not collaboration then the power of harnessing what has preceded and re-inventing it for a younger generation. Destiny Nwadire has fashion in her blood, as the eldest daughter of Nancy Nwadire, creative director of Iconic Invanity. But this diffusion line is more than an elaborate ruse to make pieces heavy on beadwork and embellishment more affordable with a lighter sprinkling. In the hands of Destiny, we have references and inspiration from Mondrian, with a palette to match, body-con that is refreshed with panelling and playsuits that will have even the previously ambivalent considering hitting the gym. For such a young entrant at just nineteen, she showed us old-school collection mores with show notes delivered ahead of time and closing with a bride, although one with sass in a tiered column with chandelier style beading for added shimmy factor. Throw in the ever popular Osas walking the runway and it was a slam-dunk.

“Wow!” was what I heard someone behind me exclaim after the Elie Kuame closed and I was also sort of breathless too, particularly after his opening series of white ensembles, that had me thinking of creative ways to upgrade one’s life so it consisted of little more than wafting around looking stupendous. The finishing from where I was sitting was of couture standards, with one silk gauze cape teamed with a wide legged trouser the definition of luxe living. 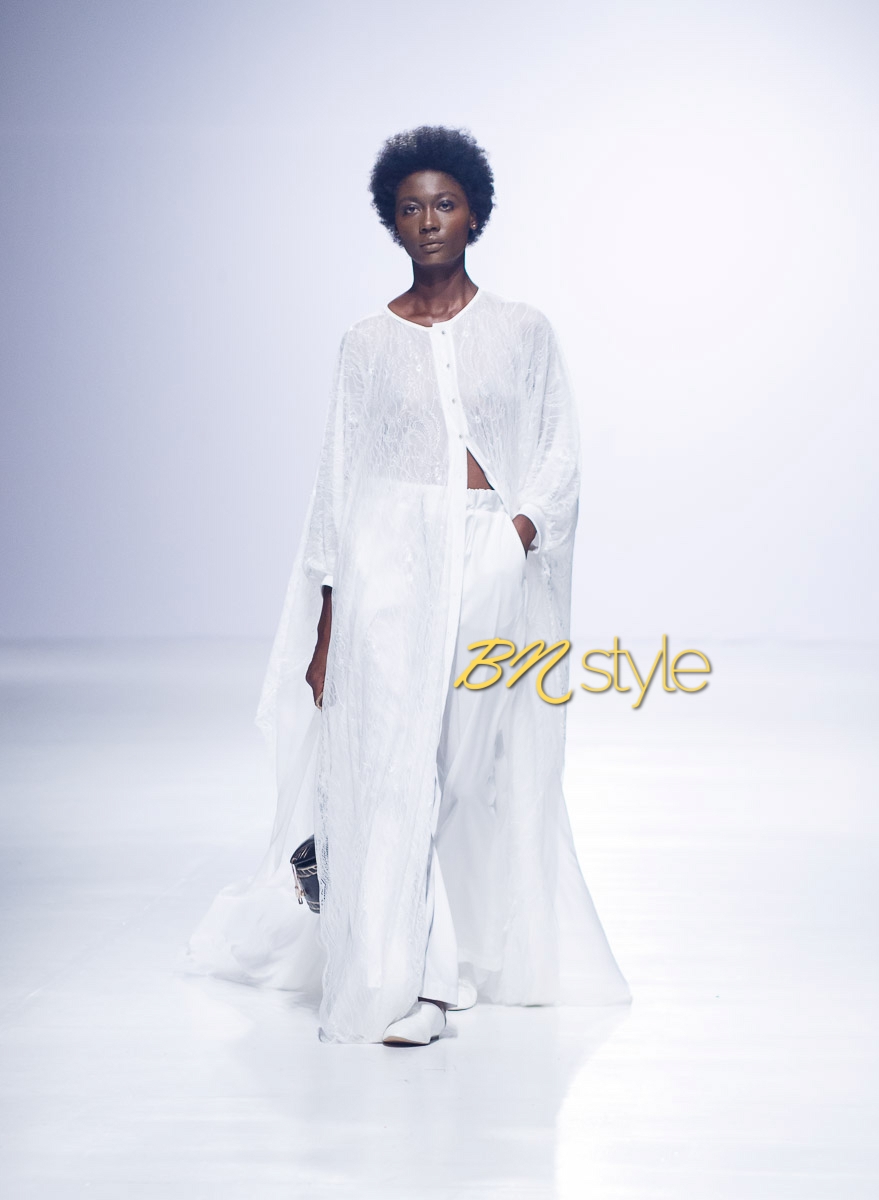 Another ‘Ooh!’ moment was provided by P.O.C who have been on the radar for a couple of seasons. Papa Omisore seems to be refining his thesis for the contemporary African man and his slim line sportswear and agbada-esque tunics that were cut open on the side were fresh, easy and very now.

But onto the loudest cheer of the night, and sadly crescendo, despite Loza Maléhombo being the closing collection of the night, who granted may not have been helped in terms of enthusiasm levels by showing clothes that have previously been seen (the perils of the internet). In short, Day 2 belonged to Grey. Why? Because they have distilled what it is to be a cool young person, end of, and here’s the kicker, made it look oh-so- casual and effortless in the process. We had futuristic fabric combinations with orange Perspex teamed with chiffon and covetable accessories courtesy of a collaboration with Kumesu. And a standout sequence of maxis and columns for the red-carpet girl who doesn’t have time for fuss but still needs to look sensational. The transparent trench-coat dresses were also a sure-fire hit. 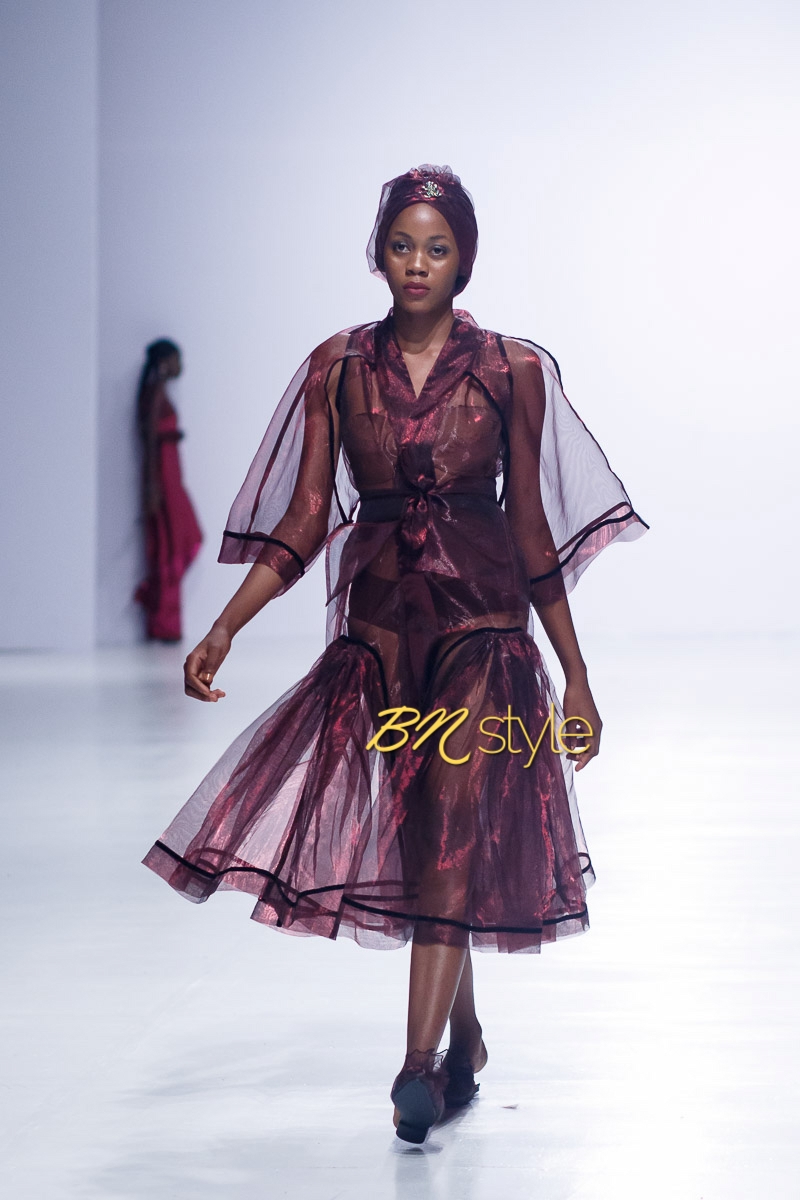 For the Grey Man hats were proudly Naija with orange and peacock blue to pick from, and the modern trad was slim on the body. A round of applause for city shorts worn with matching tucked in shirts giving us a male iro and buba effect, and it was all about keeping the palette brick, brown and yellow.

The cheering, which reached fever pitch when creative directors Joke Ladoja and Obi Obi took a bow
was well deserved, and is testament to a brand that has become as much a lifestyle, way of being and
means of articulating self as it is a gateway to affordable luxury.

#BNSNaturalHairChronicles: Vimbai Mutinhiri Has Always Had Good Hair and Is A Big Fan of Ponytails

Seyi Shay Wore This Impossibly Chic Adey Soile Dress, And We Love It!