A change in venue to Eko Atlantic from the usual home of Federal Palace didn’t dampen the enthusiasm of the die-hard fashionistas who were out in force for the seventh (I know, it really has been that long) outing of LFDW.

So what was I expecting? Well, as fashion lover, collections that were brilliantly conceived, beautifully constructed and  that either challenged and gave me hit after hit of visual pleasure.

What did I get? Well, in part some solid showings, a couple of stand outs and far too much gimmickry for my liking. By all means go for the likes on the “gram”, but when who is on the runway overshadows what is on the runway, well that’s when I just tune out and hope for a better tomorrow.

As a naturally glass is half-full kind of girl let’s start with the pieces that are still with me as I type. Three cheers for Eki Orleans who came back stronger than ever. 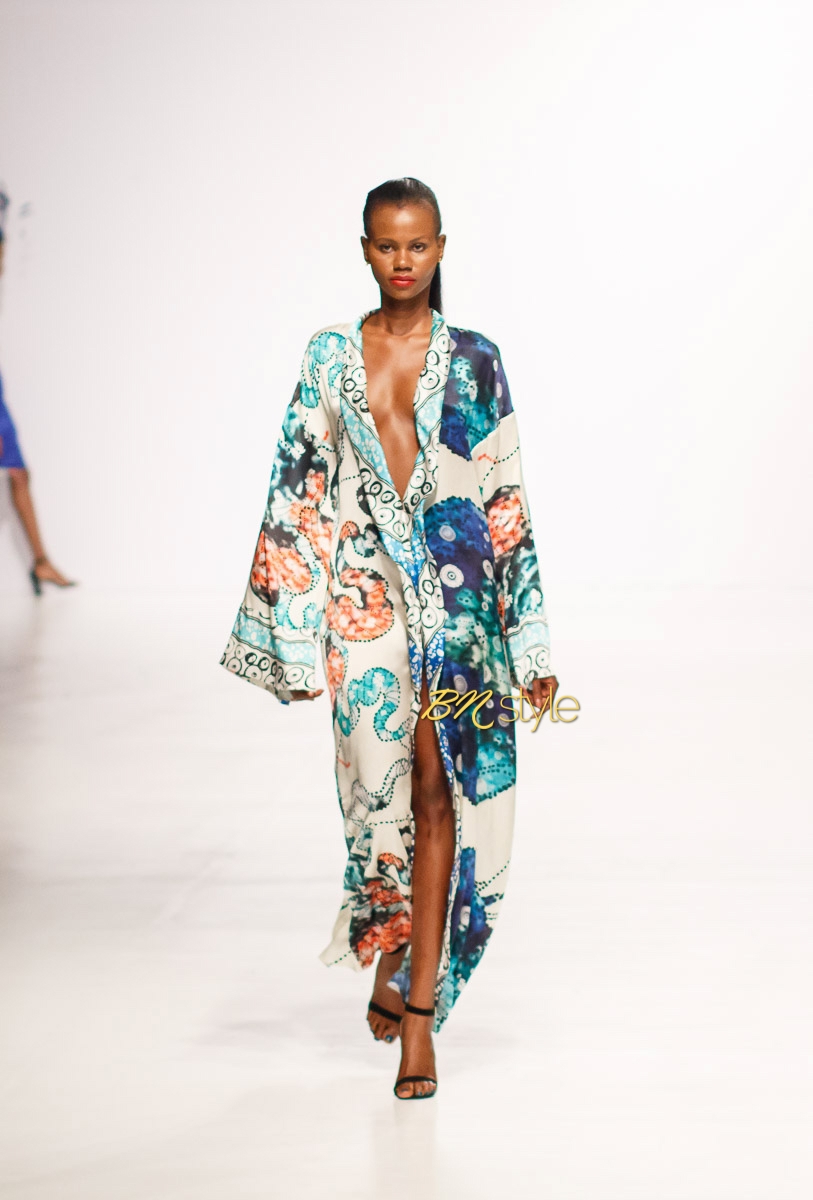 Another strong look was from O’Milua, whose collection took us to the life of a very chic 1950’s house-wife, complete with Ankara aprons and super-femme mega-bows in the hair. 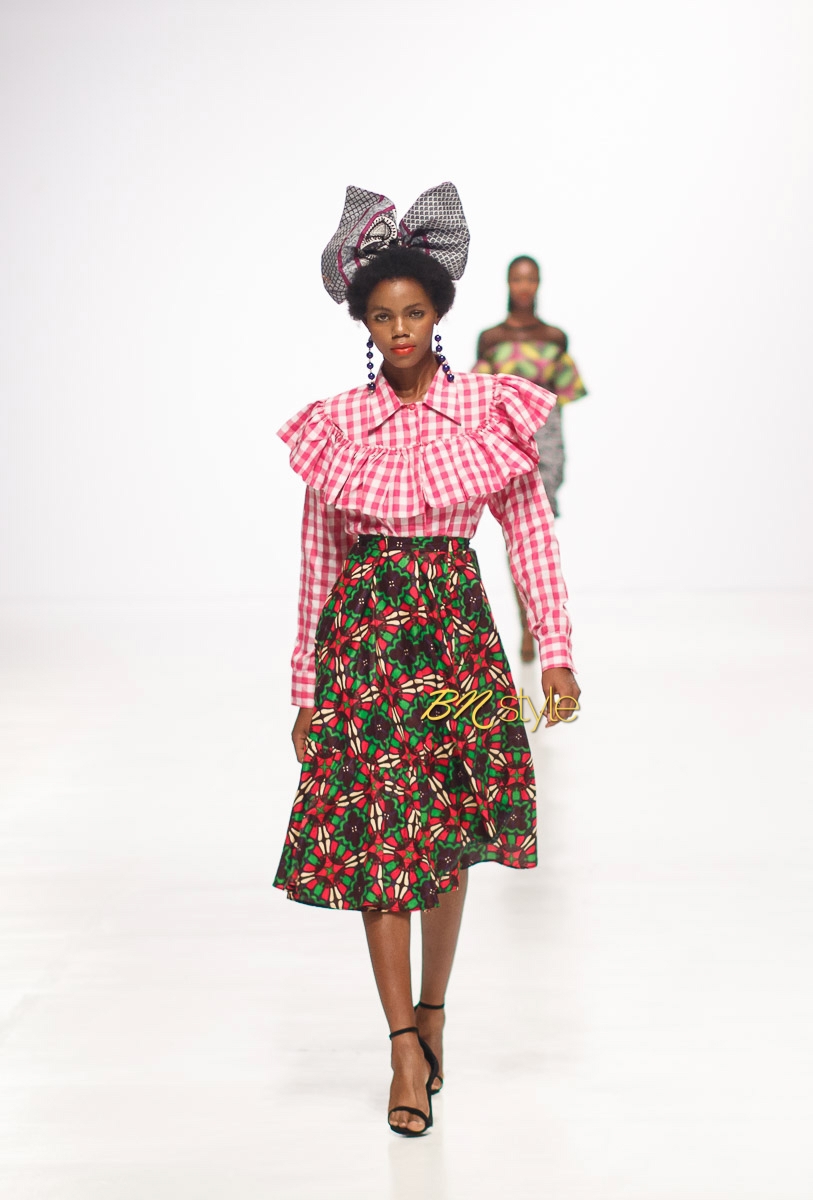 A series of flouncy blouses in ginghams and stripes were teamed with pencil or full skirts that had vibrant prints. It might sound conceptually messy but creative director Olajumoke Ademilua was clever in her print combinations. It’s been a while since she’s shown at LFDW but this definitely felt like a professional home-coming.

Ejiro Amos Tafiri took a bit of a risk which for the most part succeeded, the jersey-drapery magic which has become her trademark was practically absent, bar for an emerald green number which had the crowds cheering, and in its place, we got lots of Japanese influences, appliqué, and embellishment. If you are due on the Red Carpet or just want to shut down your Christmas Party there was plenty to choose from. 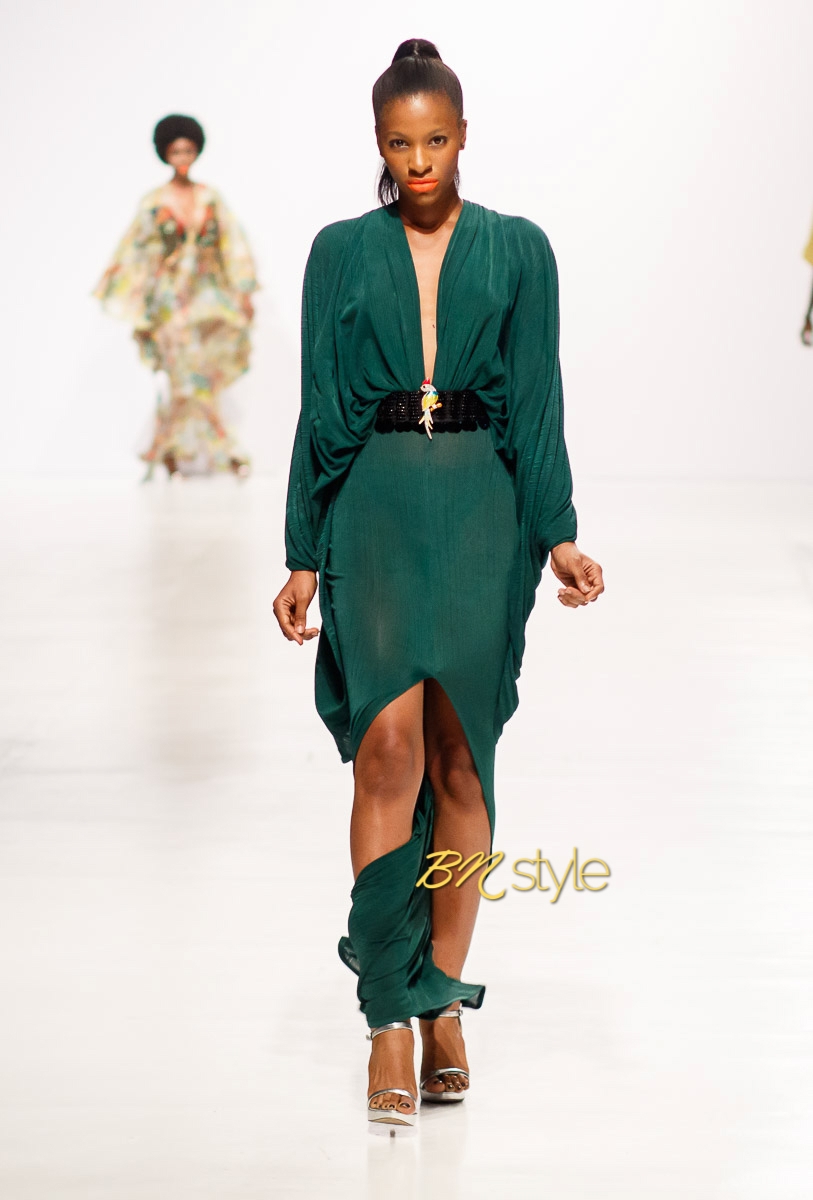 But it was Style Temple’s ode to womanhood that blew the crowd away: commencing the show with a short video that explored the facets of motherhood and what it meant to be a woman. 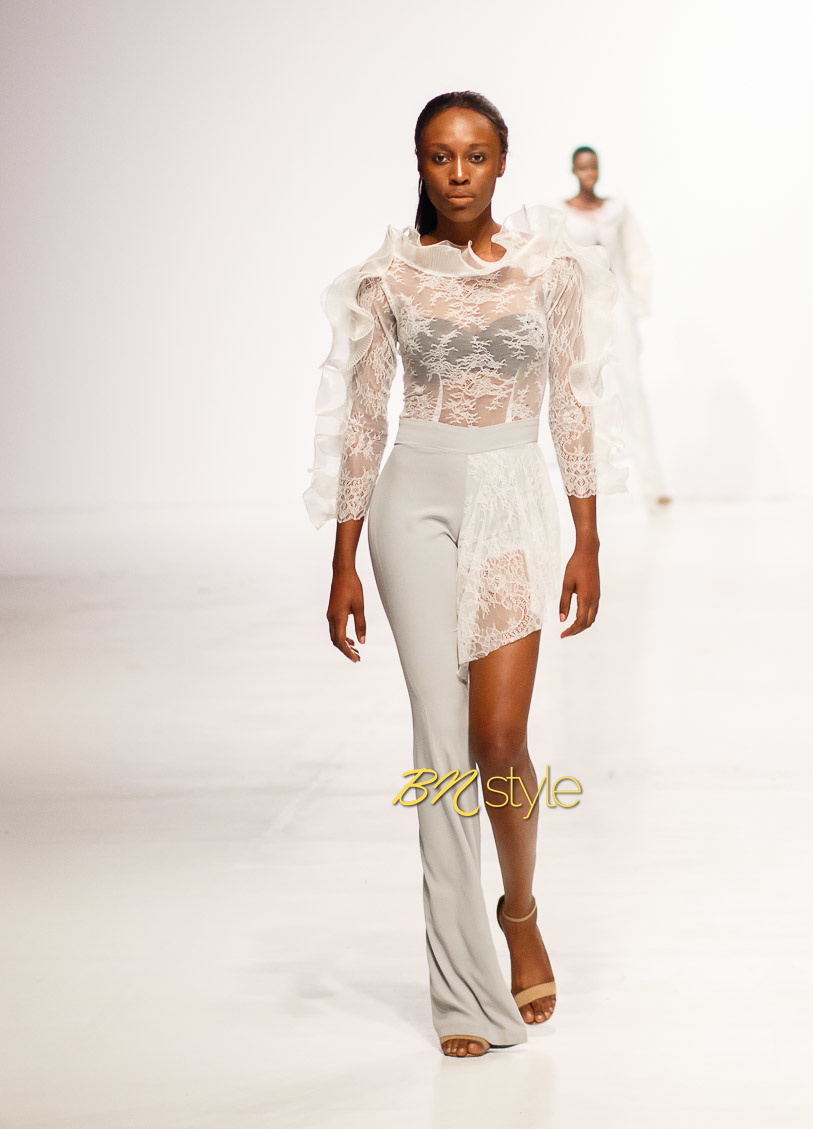 Og Okonkwo presented an accomplished, coherent and best of all well-made collection with Beyonce’s Run The World (Girls) as the inevitable soundtrack. The fluidity of the fabrics, asymmetry in the silhouettes, and play on opaque and sheer which have become somewhat of a motif for the brand were all present and correct. Furthermore, the palette that shifted from the coolest of blues through to dusky pinks and white with a blizzard of sequins was in keeping with the brand, which has the slinky girl about town as it’s heartbeat and lodestar.

But back to those cheerers, it’s cool when people applaud an insane piece on the runway, but call me a little old-school, but all this cheering for your favourite celebrity or social-media influencer walking the runway, like really people? And as for the designers who gave us more Social Media spectacle than actual well-executed, wearable, viable collections, I am shaking my head. It wasn’t that anything was truly awful, but I am really struggling to pinpoint one piece that was an anywhere-in-the-world amazing-standard from Kinabuti or Johnson Johnson; in fact, with the latter, I was half expecting an update after last year’s dramatic proposal. Moral of the story: a dollop of drama fine, but when the drama becomes the main event? Let’s keep it moving.

Menswear is definitely having a moment in Nigeria and Africa at large and Day One was awash with new and established names.

One to watch is JZO. BellaNaija Style had already received a sneak peek on this collection, which is a meditation on friendship, and the notion of a clique was evoked both in the sequence of palettes, after all every team has their official colour, and the metallic link features on pieces, a true case of the ties that bind. 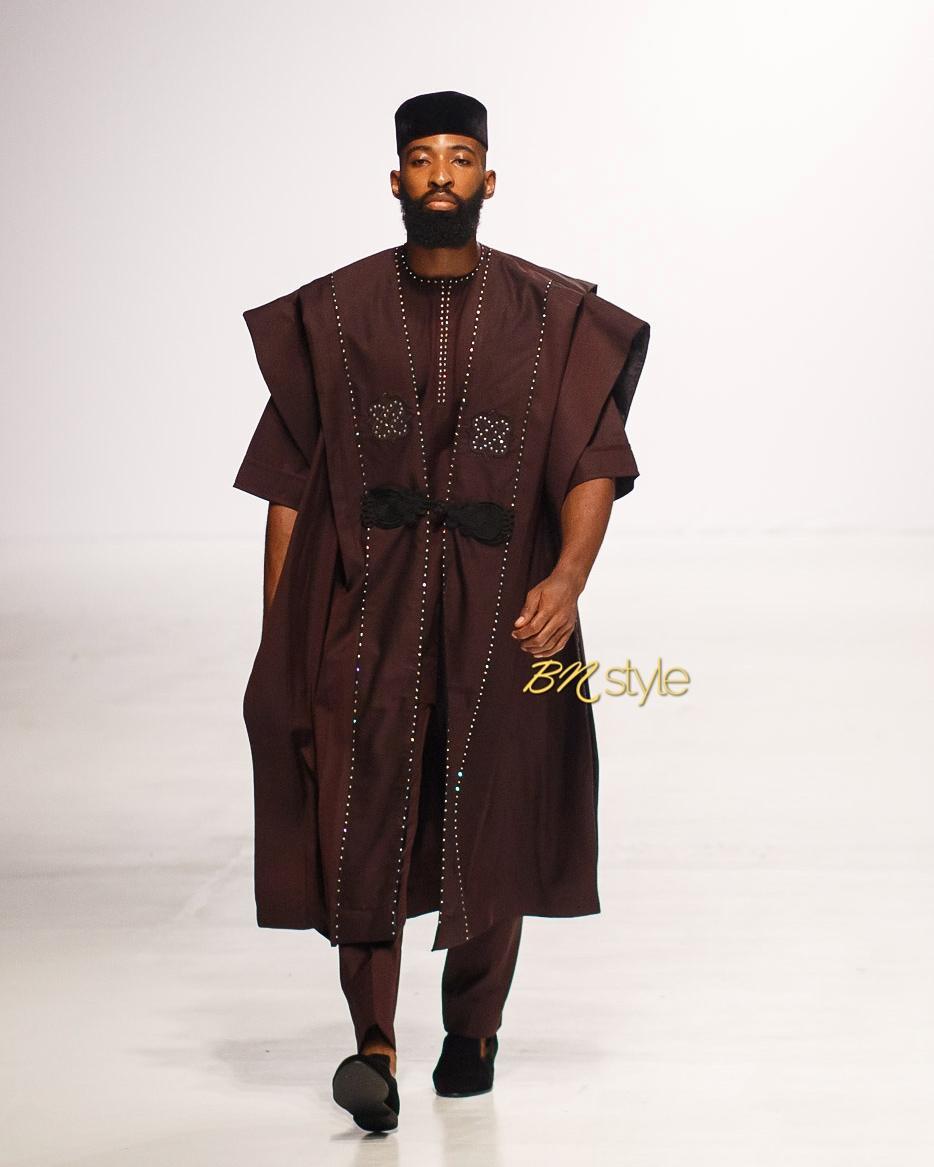 We also had a dramatic offering from contemporary traditional specialist Ugo Monye. A lighting hitch meant that sparks flew and some guests feared the worst, but once technicians had dealt with the mishap the collection was a series of baroque fabrics and flamboyant flourishes that climaxed in a Game of Thrones –esque cape worn by Ghanaian actor and TV presenter Mawuli Gavor. Expect to see gentlemen with means and the necessary confidence to be rocking the lilac floral and damask two pieces. And for the groom who wants to go down in in-law history, the open Agbada Jacket teamed with a lilac sheer dress shirt and Elizabethan ruff is a definite contender.

Another notable effort was Morafa who gave us Shine-Shine Bobo the 21st Century remix in the menswear offerings but whose women’s pieces didn’t quite hit the mark. But nevertheless, it was a promising start from him. 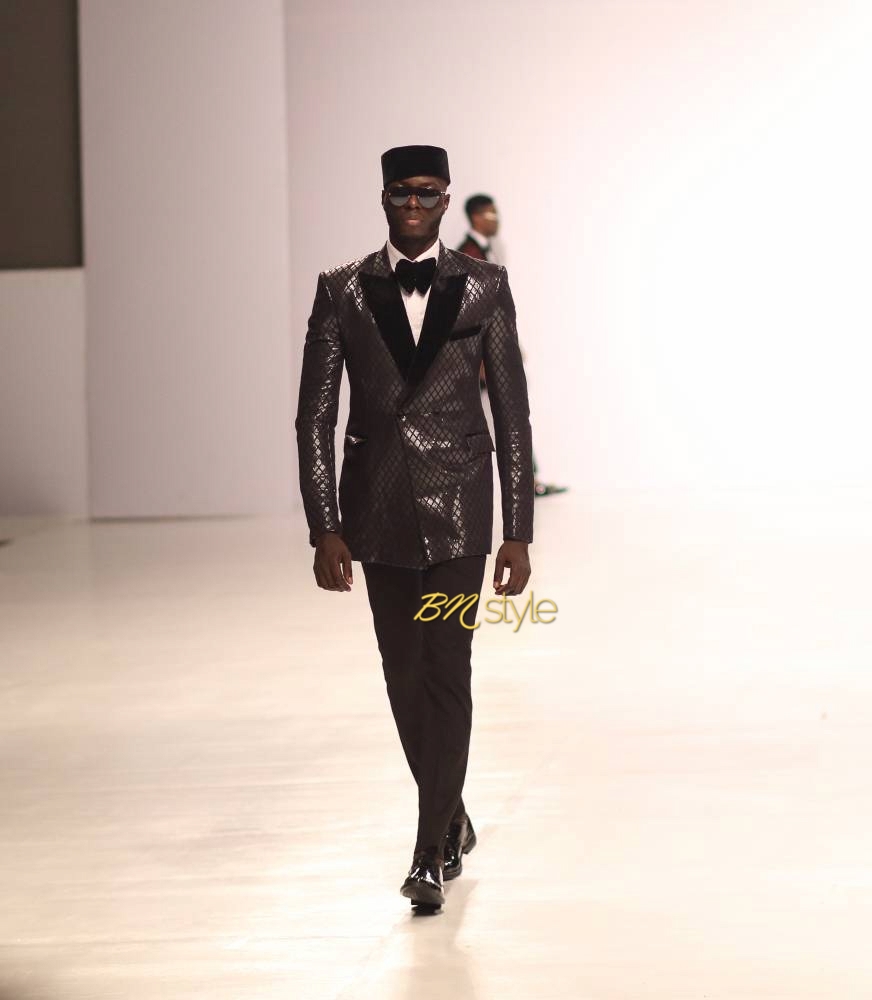 Having every collection shown in the same venue, as they are at LFDW, creates a level playing field but it also holds up a harsh mirror to those who are truly up for the task of being considered a fashion designer or not. As fashion itself becomes more experiential, it is easy for a designer to fall into the trap of trying to seduce with the show. But longevity is built on captivating us with the clothes, and for those who did so this evening, their future burns bright.

Mazzi Odu is Editor at Large of  Bella Naija Style. A writer and editor with a special interest in fashion, art and food. She has contributed for numerous publications including Business of Fashion, Harper’s Bazaar, IAM Magazine and Guardian Nigeria. She is also the founder of Magnus Oculus a blog focused on fashion and lifestyle from an African perspective. When she is not poring over a new collection she is dreaming up new recipes, reading historical journals and keeping up with current affairs.