In sharing the single message of hope, British Vogue has dedicated its September issue to 20 activists making a change in the society. Among the selection; British-Ghanaian model Adwoa Aboah, Clara Amfo, and Reni Eddo-Lodge. 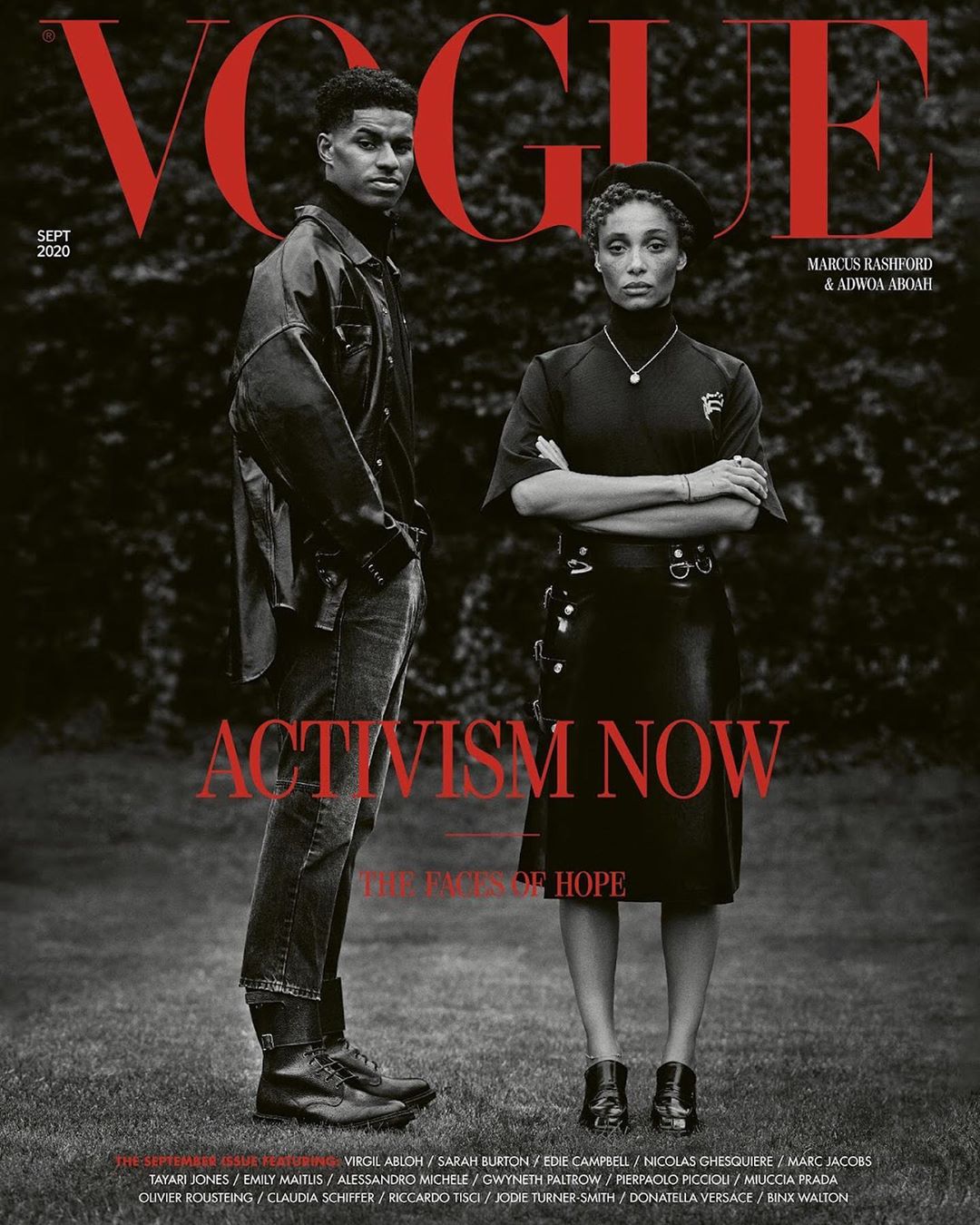 The special fold-out cover also put the spotlight on other activists making a change across various fields ranging from discrimination to inequality to racism.

The issue comes at a time where the year has seen millions of people throw power fists in the air and chant in unison, “Black Lives Matter”, in protest of the global issue affecting the daily lives of black people around the world, especially in America.

The September issue of #BritishVogue is an ode to the extraordinary voices, old and young, who in this difficult year have devoted their energies to fighting for a fairer society. “This movement is setting to change their own pathway,” #DrBerniceAKing, daughter of civil rights leader Martin Luther King Jr, tells @AfuaHirsch of the eruption of activism that has elevated the visibility of legendary figures from past battles, as well as ushering in a new generation of young activists and campaigners. From #PhyllOpoku-Gyimah, AKA @LadyPhyll, co-founder of @UKBlackPride, and #MunroeBergdorf, model and activist, to #ReniEddoLodge, bestselling author of ‘Why I’m No Longer Talking To White People About Race’, see the portfolio of global voices for change in the September 2020 issue of #BritishVogue, on newsstands and available for digital download Friday 7 August. And read the full story at the link in bio. #VogueHope. Featuring: @ReniEddoLodge Yvette Williams @OfficialJ4G @IAmPatrickHutchinson @OsopePatrisse @ClaraAmfo @BerniceAKing @JanayaTheFuture @FDwyer1980 Brittany Packnett Cunningham @MsPackyetti Photographed by @MisanHarriman, @KingTexas, @ChriseanRose and @KidNoble.

“This is a year that shredded complacency,” writes @AfuaHirsch, in #BritishVogue’s September 2020 issue cover story. “It is a year that has elevated the visibility of legendary figures from those past battles, and ushered in a new generation of young activists, in which previously unknown campaigners and celebrities alike became unapologetic about demanding change.” Meet the 20 activists on the cover making change, from #DrMeenalViz who became the voice and campaigner for BAME health workers at higher risk from the virus, to 86-year-old anti-racism activist and educator #JaneElliott, whose lifetime of work is currently gaining unprecedented attention, and Puerto Rican model and Vogue regular #JoanSmalls, who is donating 50 per cent of her earnings for the rest of 2020 to Black Lives Matter charities, see the full portfolio in the new issue, on newsstands and available for digital download Friday 7 August. And read the full story at the link in bio. #VogueHope Featuring: @Meenals_World @TamikaDMallory @RizAhmed @JanetMock Professor Angela Davis Jane Elliott Alice Wong @Disability_Visibility @IJesseWilliams @JoanSmalls Photographed by @MisanHarriman, @PhilipDanielDucasse, @KingTexas, and @EddieH__.

In his editor’s letter, Edward Enninful explained the inspiration for the issue.

“This month, all international Vogues, of which there are currently an impressive 26, are uniting to dedicate their September covers to one shared theme: hope. I knew instantly and deeply believed in what British Vogue’s interpretation needed to be — an ode to the extraordinary voices, old and young, who in this difficult year have devoted their energies to fighting for a fairer society,”

In addition to cover, British Vogue has launched a new series titled “Speaking Up,” which feature conversations with change-makers from around the world.

#BritishVogue cover star @AdwoaAboah, the founder of online community-led organisation @GurlsTalk, hosts the first in a new 'Speaking Up' series of roundtable discussions with three fellow change-makers: the model and activist @MunroeBergdorf, @BlackMindsMatter.UK founder @AgnesMwakatumma, and the founder of @FreePeriods, student and activist @AmikaGeorge. In the video, unveiled in conjunction with the activism-themed September 2020 issue, they explore the importance of community at this crucial juncture in our history. Click the link in bio to watch the full film. #VogueHope

Click here for more on this new cover www.vogue.co.uk

Kickstart Your 2019 Style With the Shopbop Sale – We Promise You’ll Love It!