Day Two of Lagos Fashion Week 2018 could be described as a day when reputations were cemented, more of later, but it was also an evening where in many instances we were treated to overt celebrating of African culture, fabrics and ways of being. Although there is still one day to go, one felt that this year’s theme ‘Africa: Shaping Fashion’s Future’ had been given to some of the designers who had duly pinned it on their walls and run with it.

Commencing proceedings were two Fashion Focus finalists: Bloke and Demure by Denike. Bloke entitled their collection “Collection About Nothing” with the colour white utilised as a starting and finishing point. Iterations of tailoring that would appeal to the younger man who wants to look pulled together but is also proud of his heritage were sent down the runway, and one is assuming the white face markings on models were a nod to indigenous religion. Incorporating culture for Demure by Denike came via the use of aso oke and head-ties galore but she also in her celebration of print. Hyper-feminine touches of chiffon and frills may have been an addition too far but could equally be argued as appealing to the mass who by and large like pieces that are de trop.

House of Kaya continued on their onward march in dominating the Nigerian luxury modesty attire landscape – a segment of the market that has exploded beyond women covering up for cultural or religious reasons to those who may have tired of the body-con assets on display aesthetic. 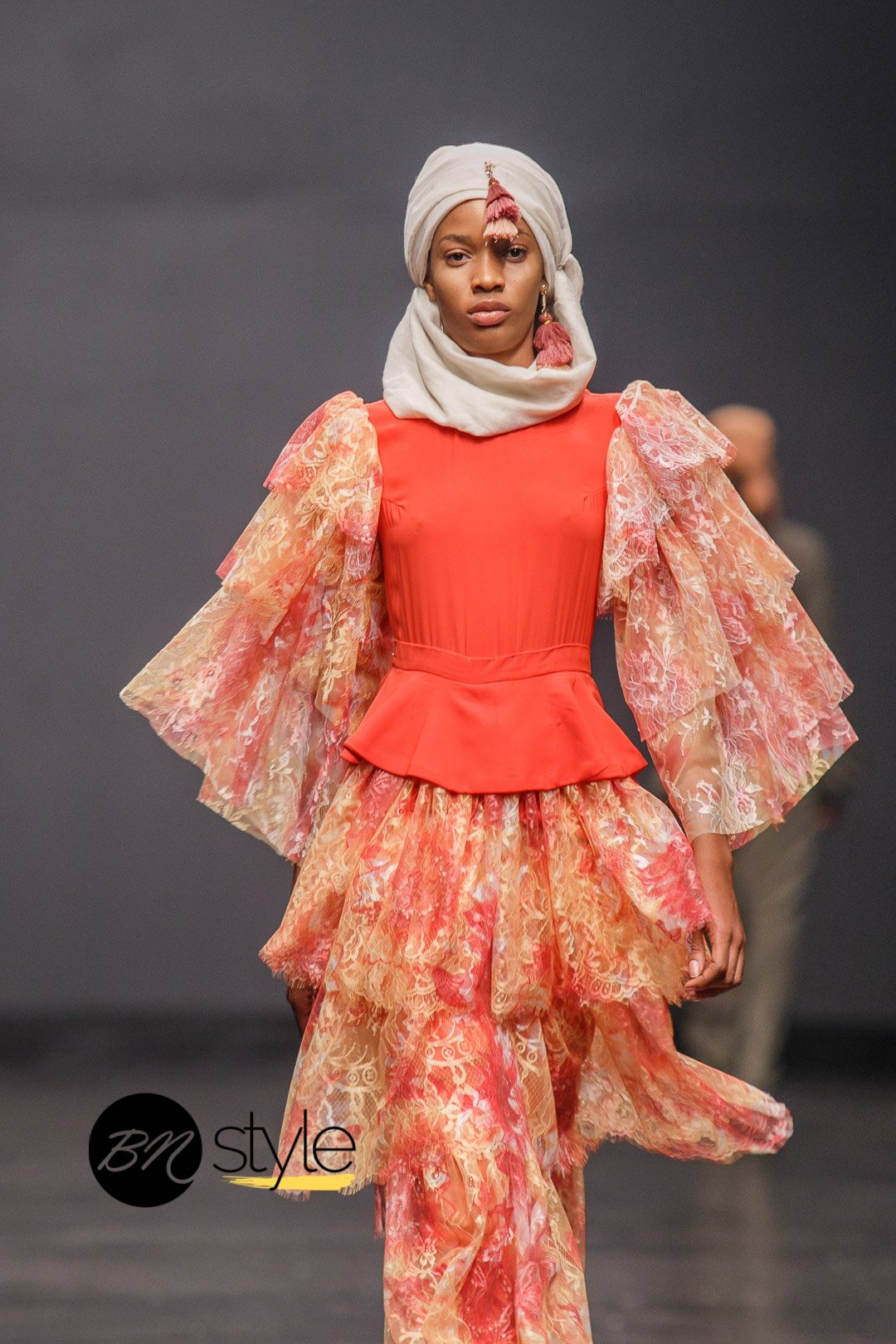 Colour palettes were overtly appealing to the eye – think azure with lime accents or followed the opposites of the colour wheel rubric, best seen in a series of aubergine and mustard jersey pieces. When playing with hemlines or necklines is a de facto no-no, interest comes via sleeves, and there was creative variation from tiered frills to ‘double’ sleeves where a narrow to the wrist bone sleeve was intermixed with a balloon shaped one on top. As the models breezed by one couldn’t help but conclude that House of Kaya is onto a winning formula and an inclusive one as their collection was not contingent on size or in the wearer being in the first flush of youth.

Moofa has many fans and one can see why – this is a brand that has built its reputation on occasion-wear with many a Nollywood starlet being spotted on the red carpet. Creative director Fashola Olayinka continued where she left off – there was plenty to wear if your job title had ‘celebrity’ somewhere in it, but there were also some items that could work on Madam/Mademoiselle In-Real-Life too. The strongest pieces were ones where layering was the order of the day, particularly when opaque and sheer pieces were paired together. The fedoras distracted from what was otherwise a coherent and well-executed collection and seemed a show flourish too far. 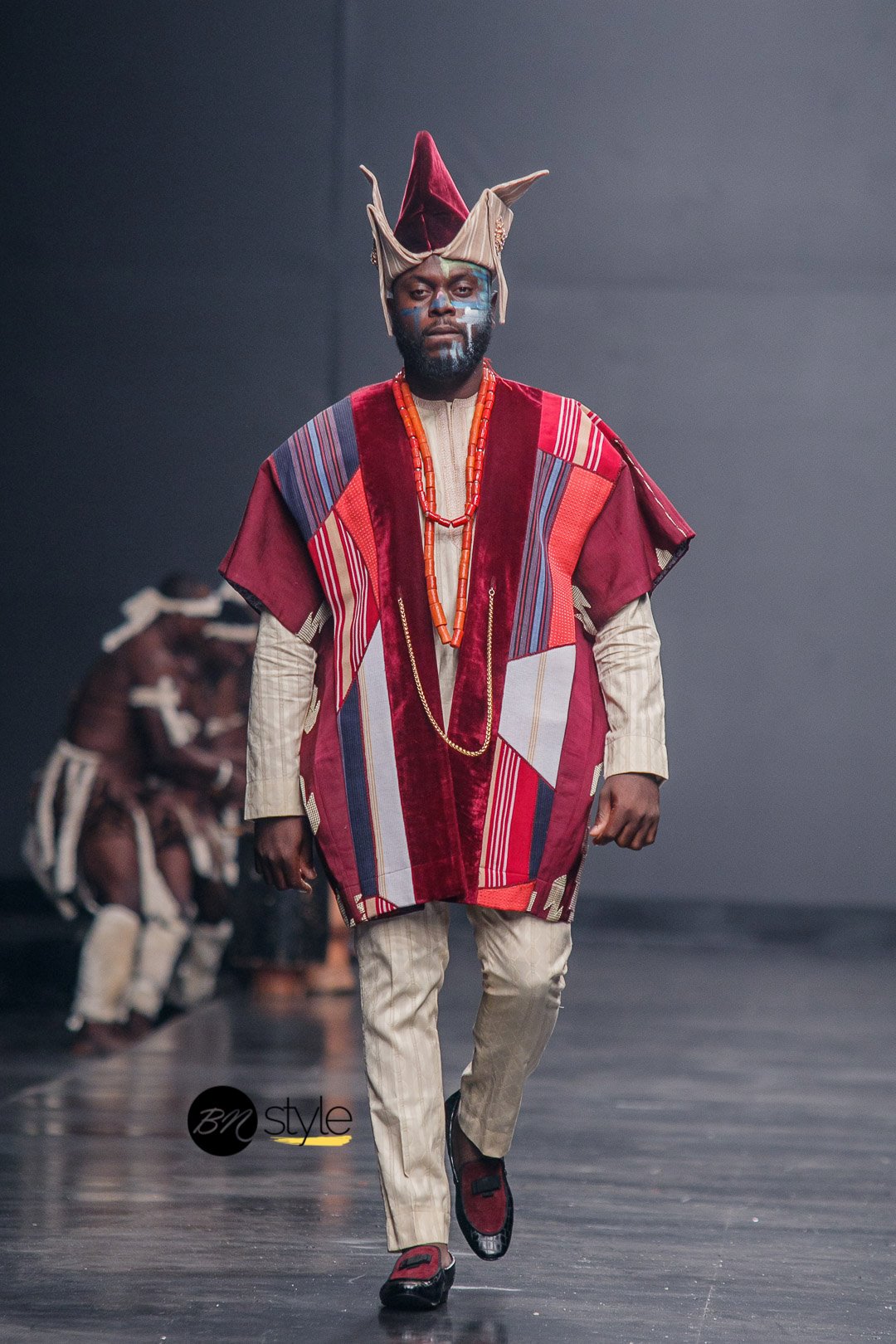 As earlier indicated some reputations were well and truly cemented and it was felt most in the area of men’s trad. Curiously, the two dominant forces, Ugo Monye and JZO, showed on day two, with both putting arguably their strongest showings yet. Over the years Monye has built a following who go to him for exquisite renderings of traditional attire, and today he pushed the envelope further with a series of longline tunics in cobalt blue with cardinal red accents. The long staffs the models walked with channelled the village elder of yesteryear, but one who has a side-hustle of being the style arbiter for the traditional ruler. The show stopper and indeed closer was a short agbada teamed with an Abeti Aja cap; even if one takes away the show’s ‘mood enhancers’ which in this instance included a full company of traditional talking drummers, the metamorphosis of an outfit that conceptually screams ‘wedding guest attendee’ into something that could be worn anywhere else was inspired. 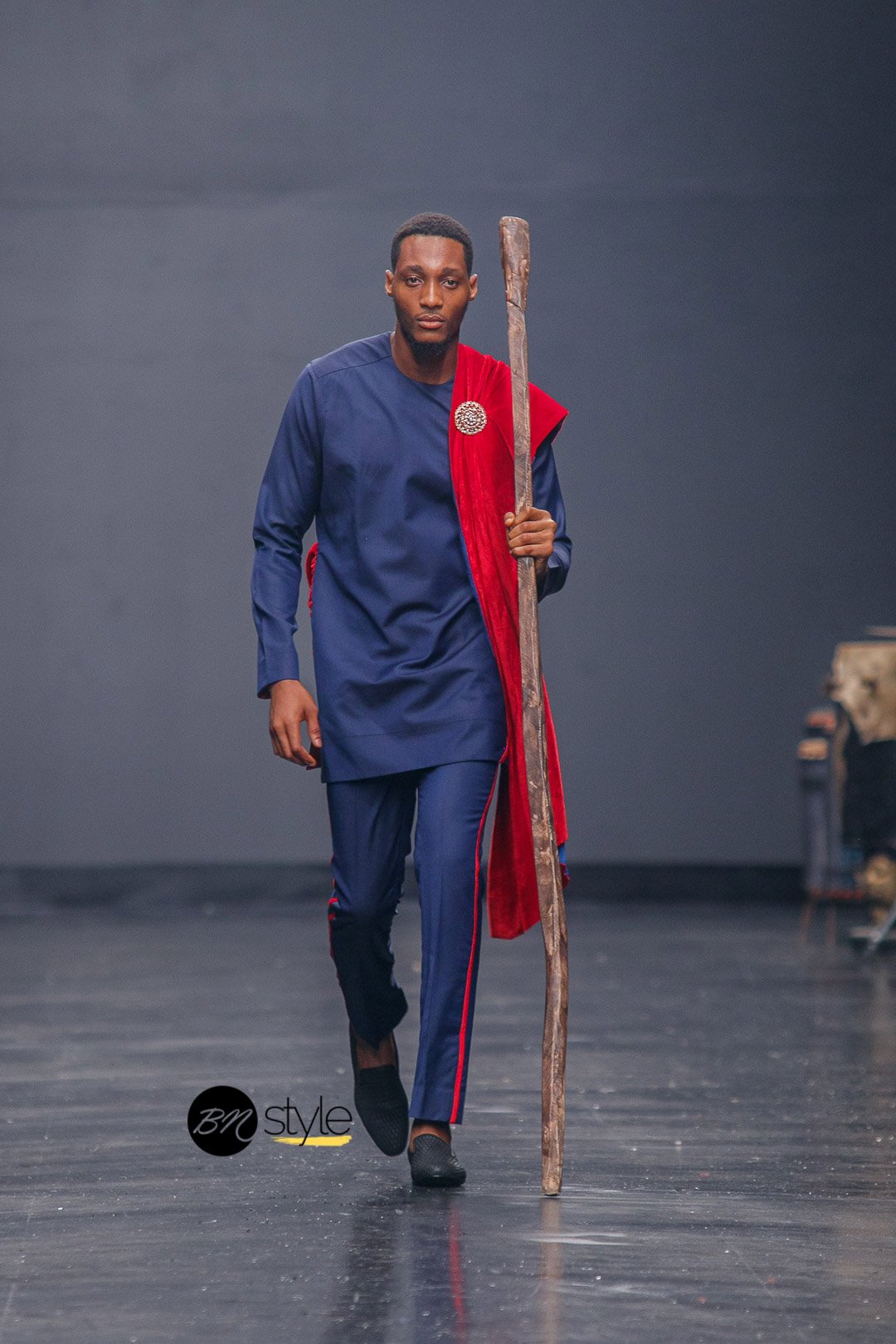 For men of a certain generation, wearing white trad indicates an elevation in station –mainly due to the fact that the dry-cleaning bill will no longer make your eyes water but also because it lends the wearer gravitas. Monye offered some alternative propositions: first evening trad – think brocades, tunics with chain fastenings and asymmetric tunics with contrasting and visible linings, and secondly black trad with texture in fabric combinations – black satin and cotton for instance – bringing the luxurious wow factor. Will black trad become the thing to step out of your G-Wagon or Bentley? Very likely. 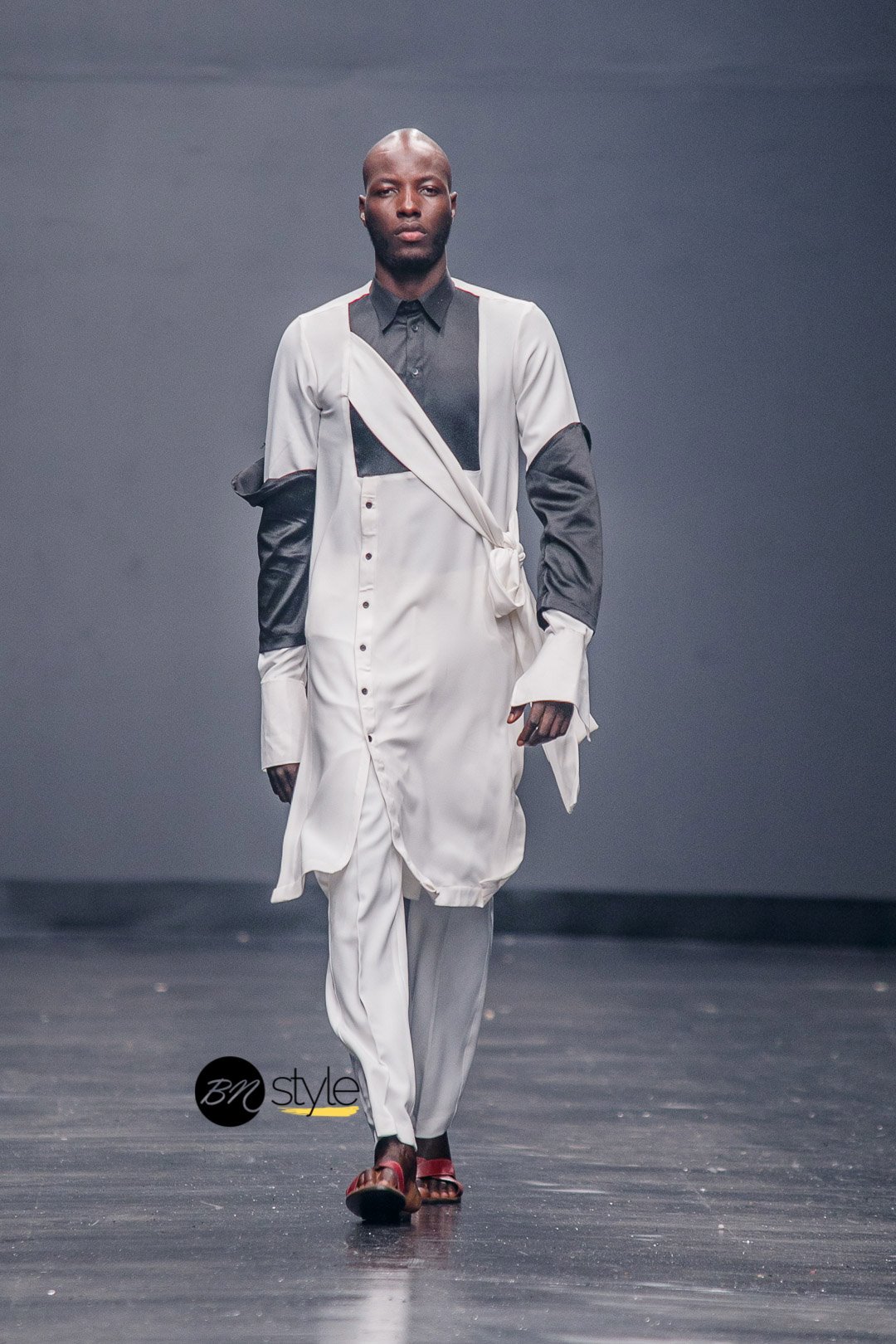 In the instance of JZO, their collection was an extension of a mandate that since 2014. Creative Directors Joseph Ike and Olamide Akindeinde have been refining which is how to make trad an active sartorial essential rather than a cultural obligation for the younger man. It’s a thin line between edgy and try-hard, but JZO have consistently created pieces that other designers might have a moment of wishing they had thought of the same idea first, such will the inevitable popularity be. This season, asymmetry in tunics which provided sexy hints of the torso in addition to collars and doubled up sleeves turned the familiar into the unusual and covetable. Palette choice was strong without being obnoxious with cobalt,
claret, bottle green and burnt umber tempered with white. A button down agbada received a cheer from the crowd and a psychic fist bump from me. When you’re on a creative roll such as this it is best to simply continue.

Style Temple is a brand that has, without doubt, turned into a movement. Just as Tom Ford in his days at Gucci created a sartorial shorthand for the woman who wanted to channel ‘rich bitch who everyone wants to be’ Og Okonkwo has cornered the tasteful ‘Slay Queen’, knowing full well that in Nigeria finishing off the opposition via your ensemble is an essential rather than a nice-to-have. A series of white dresses and separates were big on asymmetry without being the oft expected clingy. 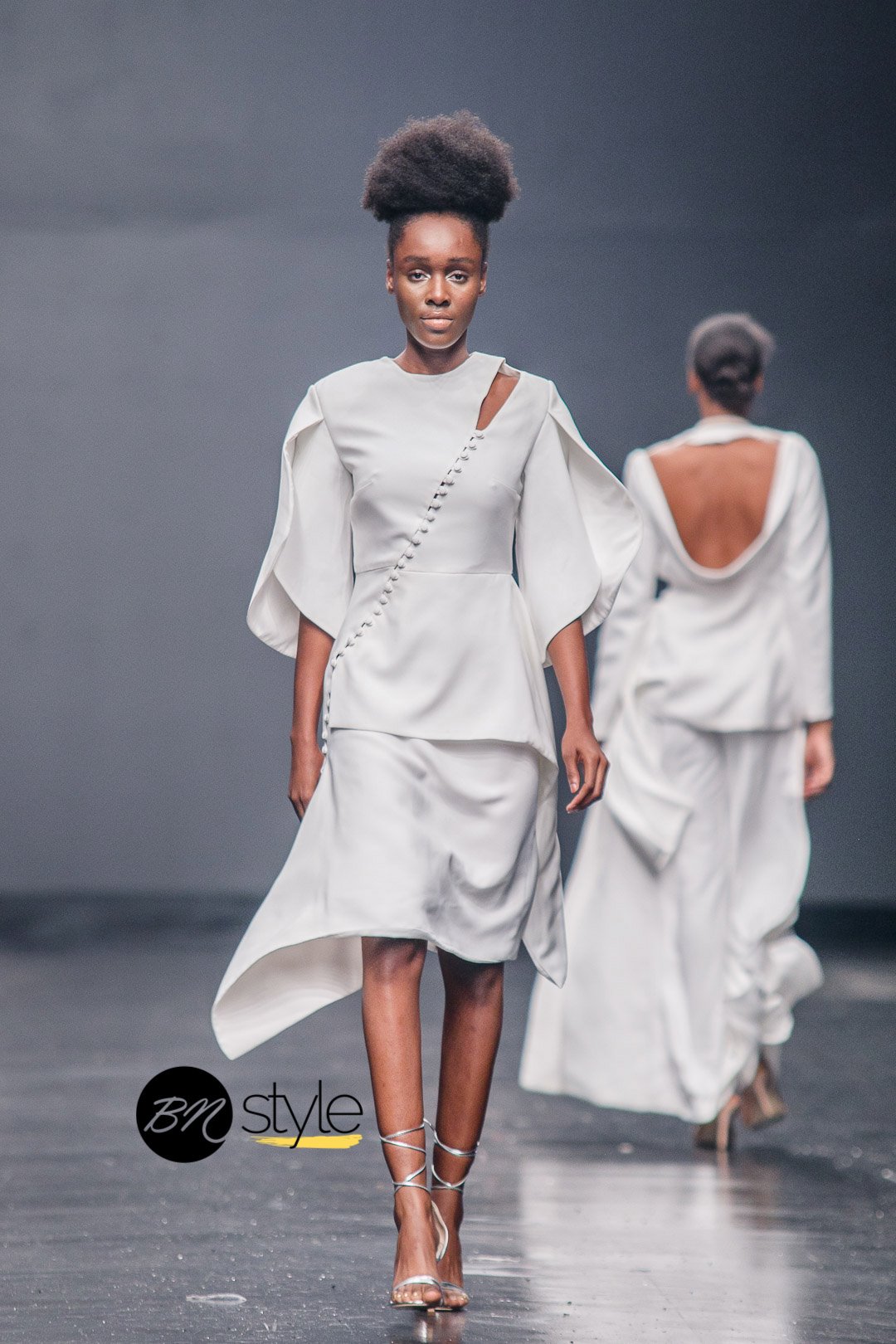 Sequins were given a modern reboot and instead of being bore-snore fishtail in shape were either drape fronted but figure-skimming in the back or a line and cinched with wide belts and being champagne in colour the wearer would be obliged to feel celebratory. Finally, expect a wide leg strapless jumpsuit which on first sight resembles a pair of trousers with a wide belt tied fastened at shoulder height to be lighting up Instagram feeds everywhere.

Going beyond the shores of Nigeria, Senegalese brand Tongoro Studio and Ghanaian brand Studio 189 were a window into alternative African aesthetics. Tongoro Studio’s Creative Director Sarah Diouf in a previous interview with Elle South Africa has said the “The Tongoro girl is one of a kind; she’s an adventurer.” And travel sprang to mind in a collection that felt
like a wealthy woman on holiday rather than pieces, you could throw on every day. 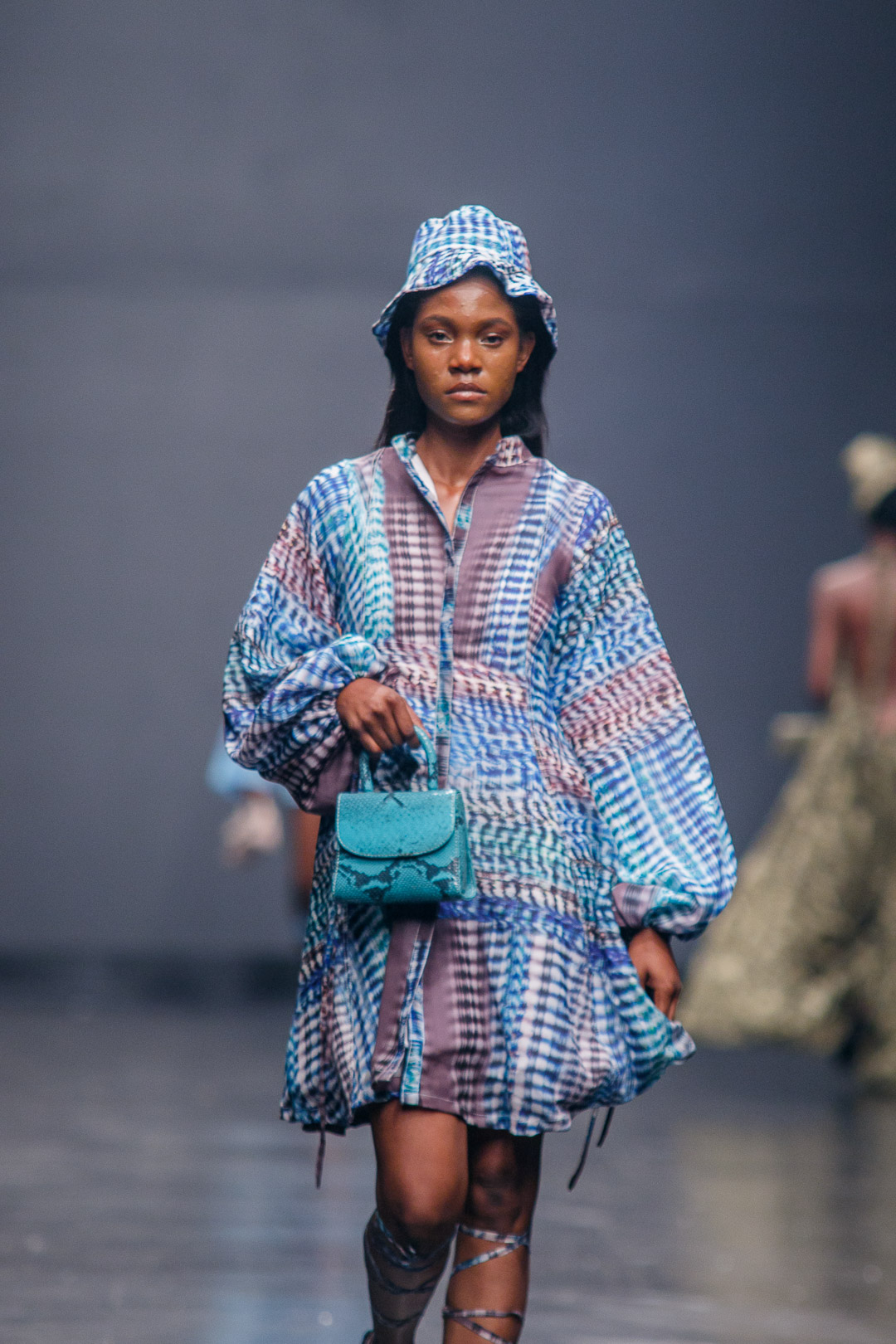 Drawstring trousers, voluminous legged jumpsuits and roomy tunics in blues and whites or lilac and lime prints accessorized with tiny totes or exaggerated cylinder-shaped clutches were not for the Monday morning meeting but were pretty nevertheless. Studio 189 also had a resort season vibe with a sunshine yellow and deep blue palette, yet even with the Soukous music bangers at full volume it never fully took flight. It did, however, have a celebrity moment with Tamu McPherson taking to the runway.

The evening closed with Lisa Folawiyo a woman who is not only one of the principal poster girls for Nigerian fashion but by virtue of her business beginnings is seen as the standard bearer for print. In what felt like her most personal collection yet she referenced growing up in 80’s Nigeria and how that has informed the woman she has become today, with even the
music choice of Old-School classic Odyssey’s “Going Back To My Roots” augmenting the point. The palette was very much tropical garden with orange, lilac and green prints, however, the sensory assault clashing was tempered by softer silhouettes that evoked carefree summer days.

Embellishment was, by and large, kept to a minimum and even the show’s opener of knee-length city shorts, off the shoulder bra top and over-sized blazer was a statement of intent; that Folawiyo known best for tunic shaped dresses and skirts could also bring fresh cool girl vibes to the table. Inevitably, there were contrasting textures; a signature that she has stayed true to and the orange neon trims referenced hair bands worn as a child as too did the corn-row hair-braid trim that featured on some of the dresses which varied in shape from bias cut to floaty midi with cutaways to hit of the night, judging by the cheers, a tulip-shaped mini. The hemline variation was a business savvy one – depending on your age and figure situation, all could participate. Nostalgia can sometimes end up looking dated but in Folawiyo’s hands it was merely a tool to create pieces that chime with present times.