Behind every red-carpet and editorial moment, there is a team of artists, designers and stylists who make it happen. In association with ALDO, South African Marie Claire Image Makers 2018 honours these behind-the-scenes stars and gives them the recognition they so rightly deserve.

Over the next few weeks, Marie Claire SA will publish exclusive interviews with these phenomenal artists, offering their industry tips, career advice and genius styling ideas. 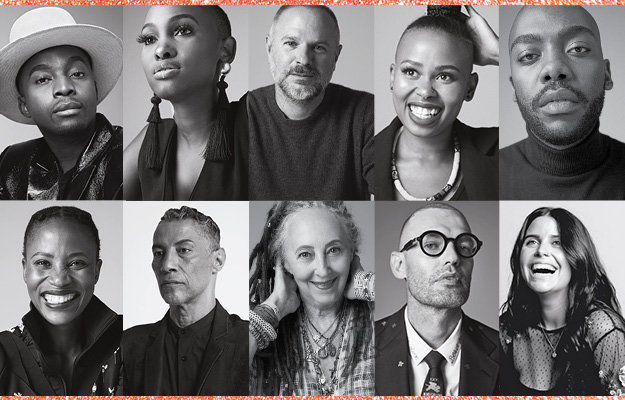 Louw’s journey into fashion began when he started the Black Coffee label with Jacques van der Watt in 1998. He has since worked with the likes of Richard Branson, R Kelly, Chanel Iman, Hugh Masekela, Freshly Ground and Shakira, and with prestigious brands such as Vivienne Westwood for L’Atelje, Prada and Dries van Noten.

This artist wasn’t paid to take a picture until he was 29. Today, the South African-born photographer has collaborated with giants in the fashion industry such as Self Service, Rag & Bone, Givenchy, Thierry Mugler, Isabel Marant, Lacoste, Victoria Beckham, Alexander McQueen and Martin Margiela.

Her design journey started in 1976 when she was studying Fine Art at Wits and realised that she wanted to do something more practical. Today, she is one of South Africa’s leading fashion designers, operating from Leopard Frock, her creative workshop in Saxonwold, Johannesburg.

In primary school Saadique already knew that this was his destiny. This South African multi-award-winning hairstylist has earned a reputation as one of the country’s most forward-thinking, innovative hair fashion designers, and has worked with the likes of Naomi Campbell, Charlize Theron, Kelly Rowland, Alicia Keys and the Kardashians.

After studying cosmetology and technical drawing, this visionary merged her two chief passions to become a make-up artist. She has worked on many of the faces gracing South Africa’s red carpets, such as Nomzamo Mbatha, Thembi Seete, Pearl Modiadie and Bonang Matheba, and was also responsible for Mama Winnie Mandela’s make-up on her 80th birthday.

It all began for Trevor when he won a Style Reporter competition in 2012. The photographer, stylist and blogger has since worked for some of the top retail brands in South Africa. His street style portraiture is nothing short of art and he was invited to speak at Oxford University about his lived experience as an African creative.

What led Kwena, also known as “Kween Kwena”, to this path was simply a love of nice things, looking ‘extra’ and a sense of curiosity. The Limpopo-born trendsetter and style icon has become one of South Africa’s most influential stylists and has worked for various TV shows, magazines and commercial clients, and recently made her debut at Pitti Immagine Uomo in Italy.

After a career day visit in matric from LISOF, Rich dropped all his dreams of being a lawyer or architect and convinced his mother that fashion was what he wanted to do. Since then, the South African-based designer founded contemporary fashion brand RICH MNISI, which has grabbed the attention of both local and international media.

After working at a cosmetic company straight after school, Kelly embarked on a career as a professional make-up artist at the age of 18. The beauty maven is now a highly sought-after make-up artist in South Africa and has worked with the likes of Woolworths and Edgars, as well as a prominent editorial in L’Officiel.

Bomzi’s love for the creativity and art behind hair styling is what drew her to the hair industry in 2013. The up-and-coming hairstylist has worked with some of South Africa’s leading magazines and top celebrities, such as Ayanda Thabethe.

Kenneth Ize Has A Collaboration With Karl Lagerfeld in the Works, and We CANNOT Wait !