Here’s What We Know About the Superbalist & Spree.co.za Merger Two of South Africa’s Naspers majority- owned brands Spree and Superbalist (it owns 53.5% of Takealot (which owns 100% of Superbalist), and it owns 85% of Media24 (which owns 100% of Spree) become one next month. All Spree customers will automatically be migrated to Superbalist from early October when the two entities are merged, Takealot said. Industry insiders speculate this portfolio shuffle is primarily about building scale.

The Spree brand will then be phased out from that point.The two companies initially announced the merger in June.

The merged platform will take on the Superbalist.com name and, when it officially launches, will become the largest fashion e-tailer in the country, offering hundreds of brands, thousands of styles, better pricing and a comprehensive variety of sizes as well as the full spectrum of payment options as well as swift and efficient logistics.

“Regardless of the name we trade under, the most important aspect of our business remains great customer experience,” Superbalist Luke Jedeikin and Claude Hanan CEO duo said in a statement. 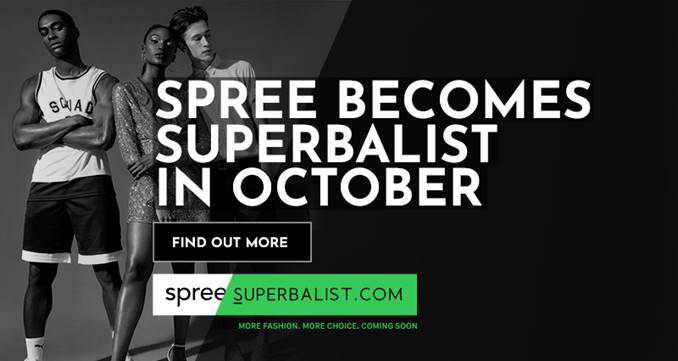 “Merging South Africa’s two leading online fashion brands, Spree.co.za and Superbalist.com has created a powerhouse in fashion. Our merchandise mix will cater to all South African shoppers with basics, classics, high fashion, street gear and plus-size ranges all being part of the extensive offering,” they went on to say

This all works out for the South African consumer we reckon! Happy shopping!

Lanre DaSilva Ajayi, Mai Atafo & Adebayo Oke-Lawal Are The Coaches for The Upcoming AMVCAs “Design For The Stars” Competition