Established fashion brand FRUCHÉ has unveiled its new collection tagged Ibeji. As expected, the lead designer Frank Aghuno presents a pleasing sartorial offering which he created as a tribute to the Lijadu Sisters; Taiwo and (Late) Kehinde Lijadu. In the statement below, the designer details his thought process during the conceptualization and design of this collection. 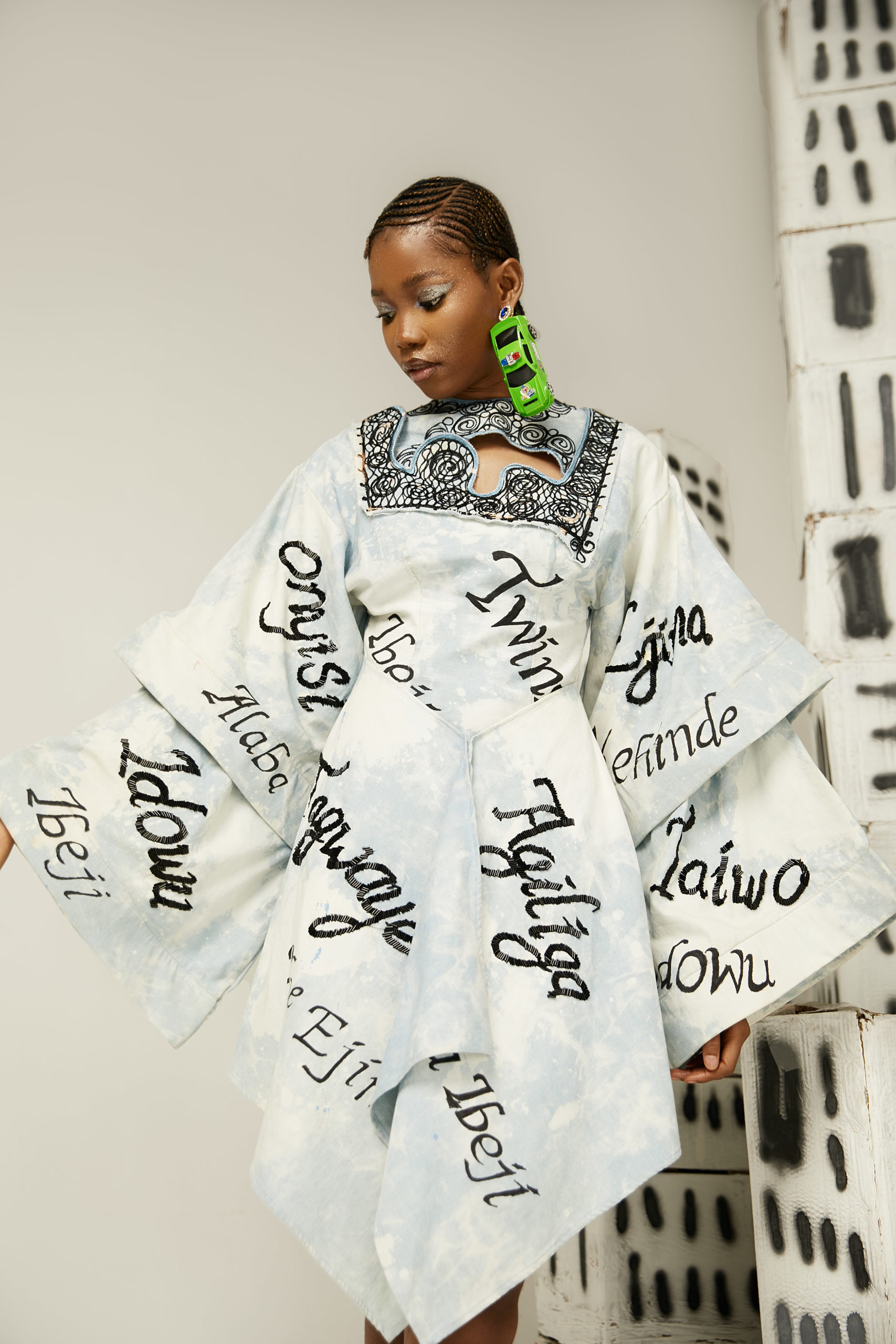 IBEJI is the name of an Orisha representing a pair of twins in Yoruba land. Nigeria, particularly the southwest, has the world’s highest twinning rate. The Yorubas praise the birth of twins and see it as a great blessing. During the iron age the Yorubas loved twins and worshipped them as gods, knowing that if they did not, the consequences would be dire. The Yoruba Ibeji statues of worship were crafted from wood and have ornament necklaces made from terracotta clay. The statues are stained with important metals to resemble our beautiful African skin. The world’s largest collection of “Ibejis” are currently at the British Museum, London, not Nigeria.

The firstborn of the twins is known as Taiyewo or Taiwo while the second one is called Kehinde. In Yoruba culture the second twin is considered the elder twin; the reason for this is that Taiwo is sent by Kehinde to judge if the world is fit and beautiful before he/she descends, in accordance with Yoruba belief. Taiyewo is believed to be mostly the quiet, calmer, and introverted of the twins, while Kehinde is mostly believed to be the extroverted one. The Aniocha people of Delta state (The Aghunos state of origin) call the first twin; Onyisi (Frank) and the second is Agiliga (Dricky). The Igbos call twins Ejima and the hausas call them Tagwaye.

Growing up in Lagos, people would be elated whenever they saw us and even come up to greet us simply for the fact that we are twins. We would wear matching clothes, commonly referred to as “And Co”. Sometimes we would switch up the colours so they weren’t completely alike. We never really liked having similar clothes because we were quite different and Fred used to “borrow” my clothes which was quite annoying. 2020 was quite the year and it had most of us feeling down and questioning a lot of things in our lives. There was a lot of uncertainty and so my mindset was to stay happy. I took this time to reflect and think of all the positives, all the right things that have led me to this point rather than focusing solely on the negatives which were actually important lessons. For this collection, I tried to remember my childhood. I believe that is my happy place. I began to reminisce, I had these Lucid dreams about summer holidays, trips abroad, cartoons and Television shows like Papa Ajasco, Ed, Edd and Eddy, Kids next door etc. It was childhood nostalgia.

As a child, I would rip old tees and make them into dresses. Upcycling has always been my thing. In this collection, I’ve created lurex and cotton Aso Oke striped looks reminiscent of the t-shirts we would swear as children. We would see similar shirts on characters in cartoons and popular shows like Papa Ajasco. The characters often wore very quirky clothes. Boy Alinco would wear these striped shirts with suspenders and papa Ajasco would wear button-up shirts with a necktie and wrapped around his waist. We bleached chambray to create a sky print. I have a natural affinity for the sky. I could be having the worst day and then I go outside and just observe how ethereal the sky is and it calms me. I am fascinated by the world in general. It is our duty to save this planet, reduce waste and create a better, more sustainable future for the generations to come. I’m constantly pondering about the universe and all the undiscovered things in space. This fascination inspired the cosmic elements in the collection.

My brother and I tried to build a go-cart when we were younger, it never left the driveway but we put all our effort into it that summer because we simply loved to create. It’s all we know. The toy car earrings depict that particular project. i don’t think i’ll ever forget because looking back now it really challenges me to keep pushing. The police cars are also a note on the End SARS movement. I find it quite frustrating that SARS officers would point a gun at my brother’s face just because he has dreadlocks or myself because of the way I dress or the colour of my hair. Let the youth live and express themselves freely. The Nigerian government calls us lazy and asks their Doctors, Lawyers, Accountants, financial analysts to start businesses and create jobs for themselves, well here we are. Support us, stop harassing and killing us. 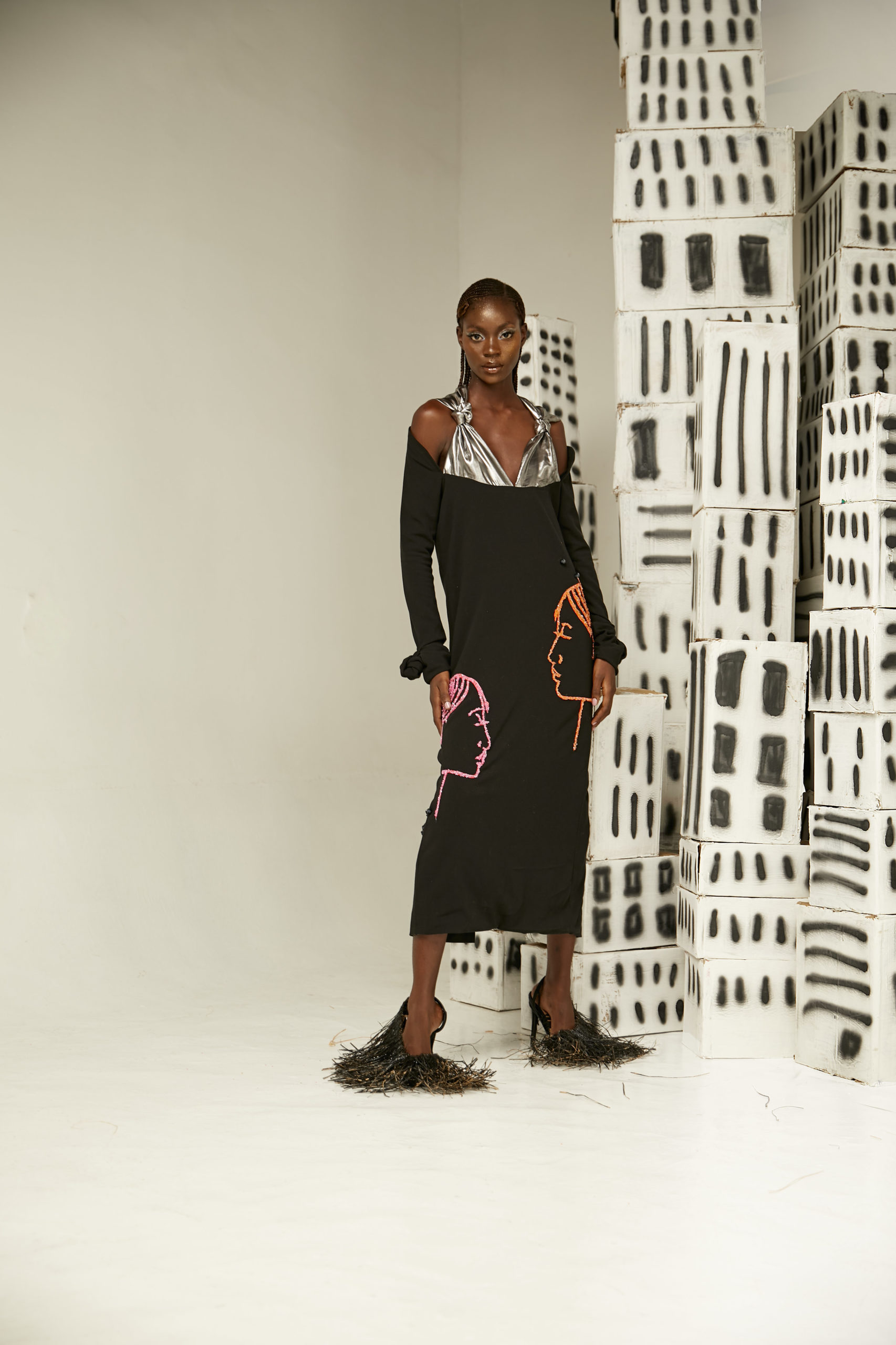 Dricky Stickman created the installation in the background from upcycled cartons inspired by COVID Palliative boxes that were found in warehouses across the country long after the lockdown was over, meanwhile millions of people were left without support when they needed it the most. Dricky spray-painted the cartons to look like skyscrapers reminiscent of the hand-painted backdrop he created for one of our first lookbooks.

This collection also serves as a tribute to the incomparable Lijadu Sisters; Taiwo and (Late) Kehinde Lijadu, who were identical twin sisters from Nigeria. They were a music duo from the mid-1960s to the 1980s. They achieved success in Nigeria and had modest influence in the United States and Europe. The New York Times reported that the sisters were “smiling free spirits” who mixed “sisterly banter and flirtatiousness” in their performances which featured positive messages such as the benefit of returning home. They were outspoken and utilised their platform to talk about many injustices. “I will forever be the mouthpiece of those who are oppressed worldwide,” Kehinde Lijadu (Late) said, and in the same way, I like to think of my work as a form of activism and empowerment.

See the full collection below 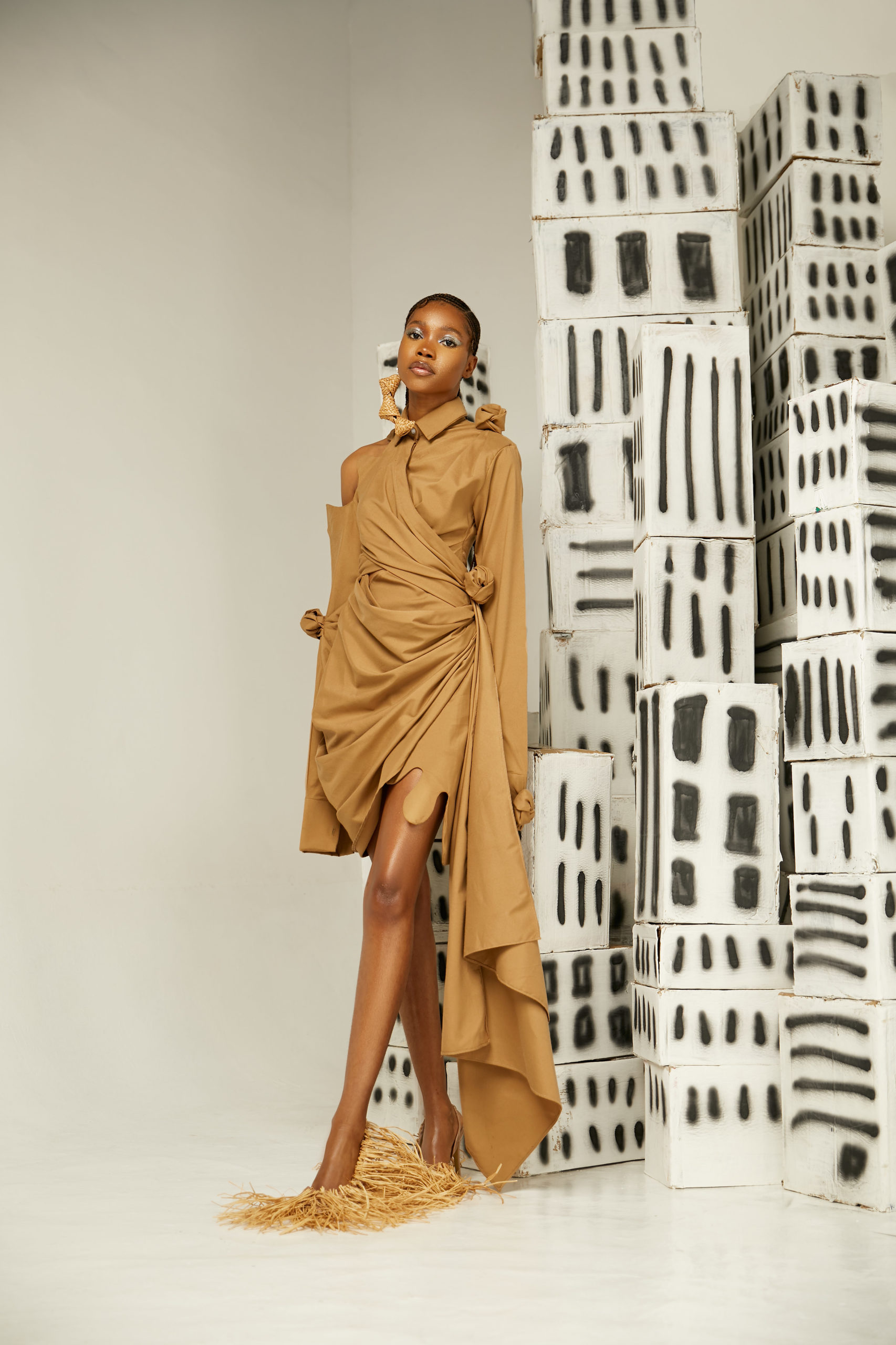 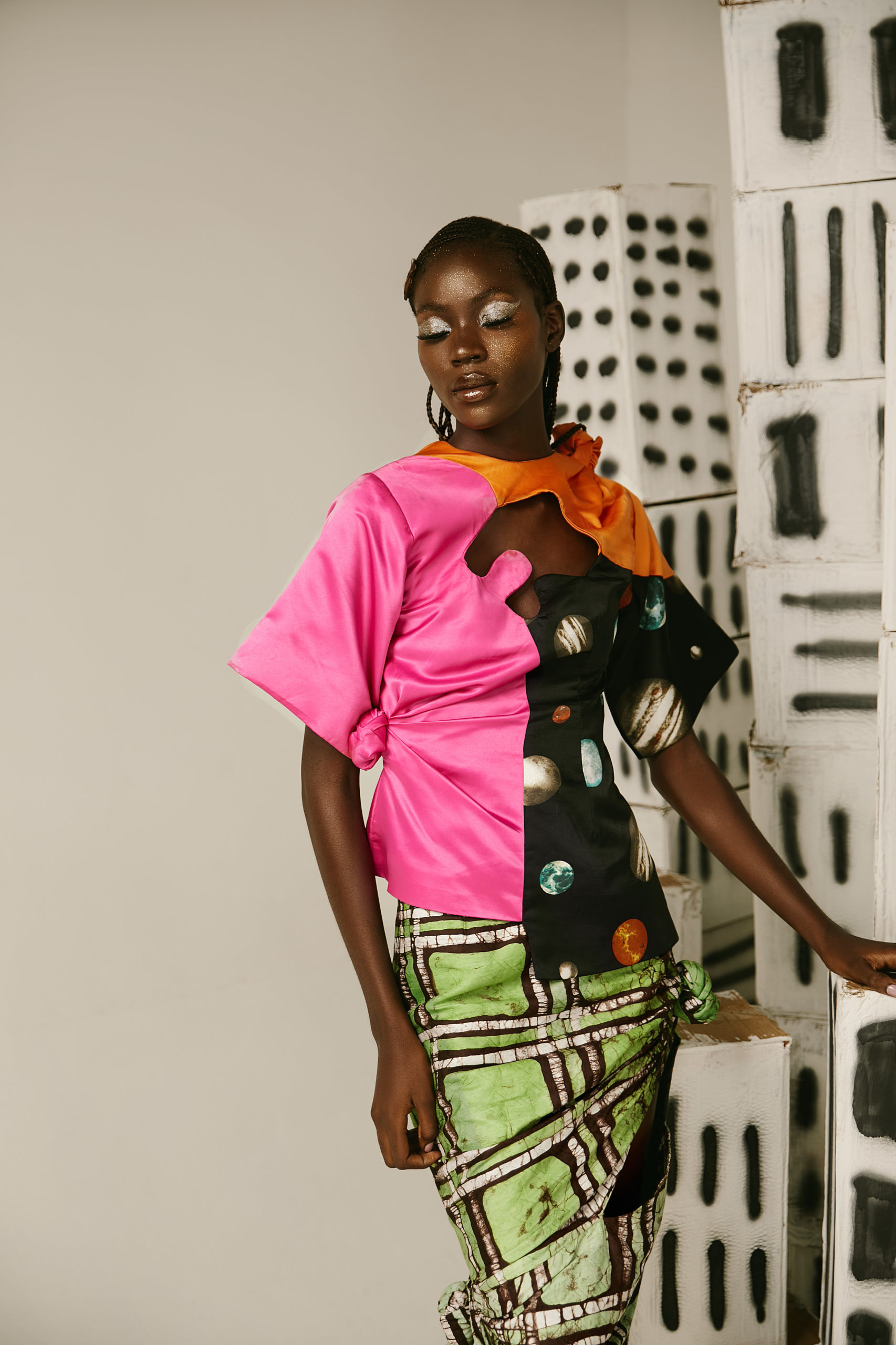 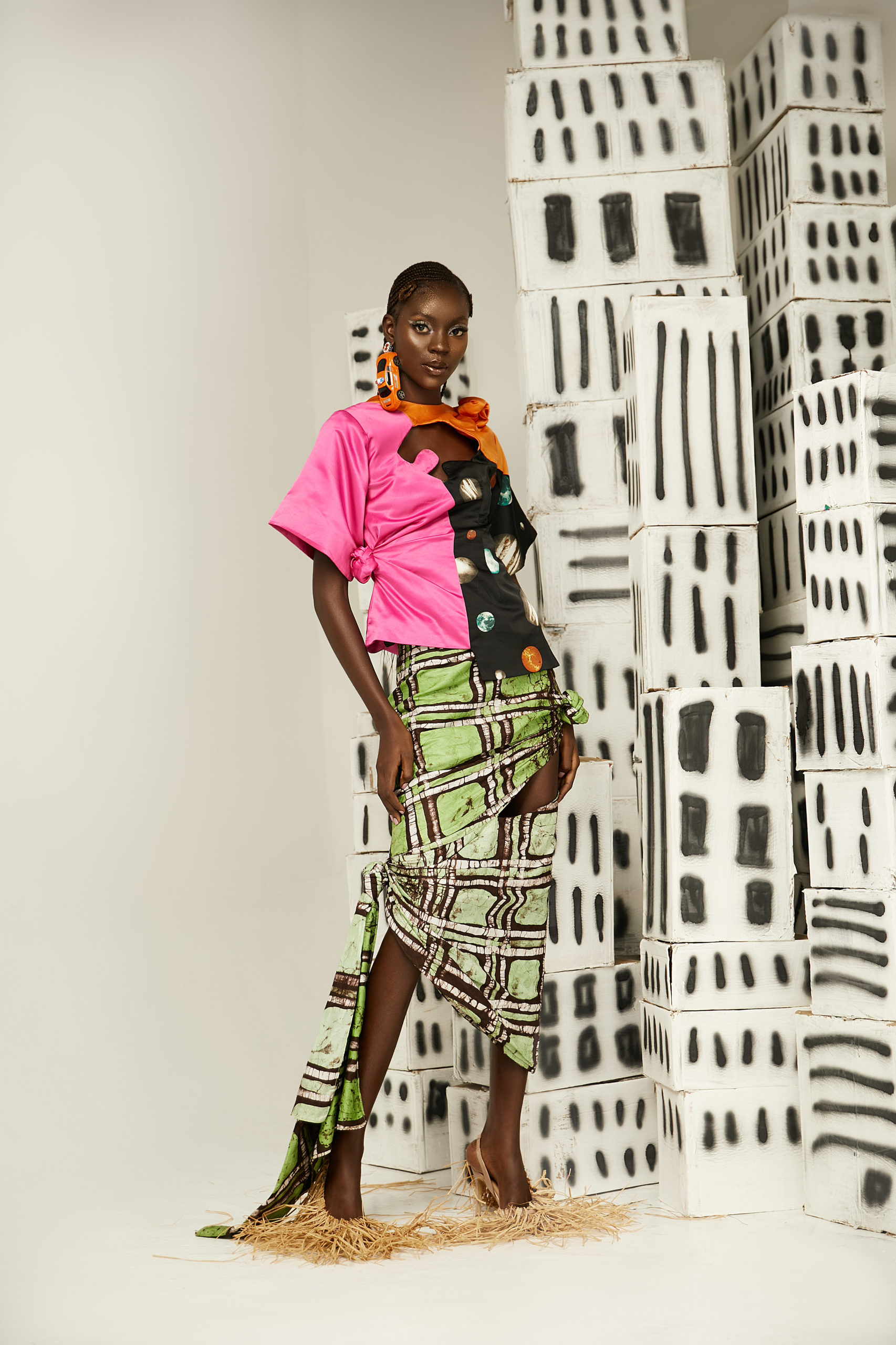 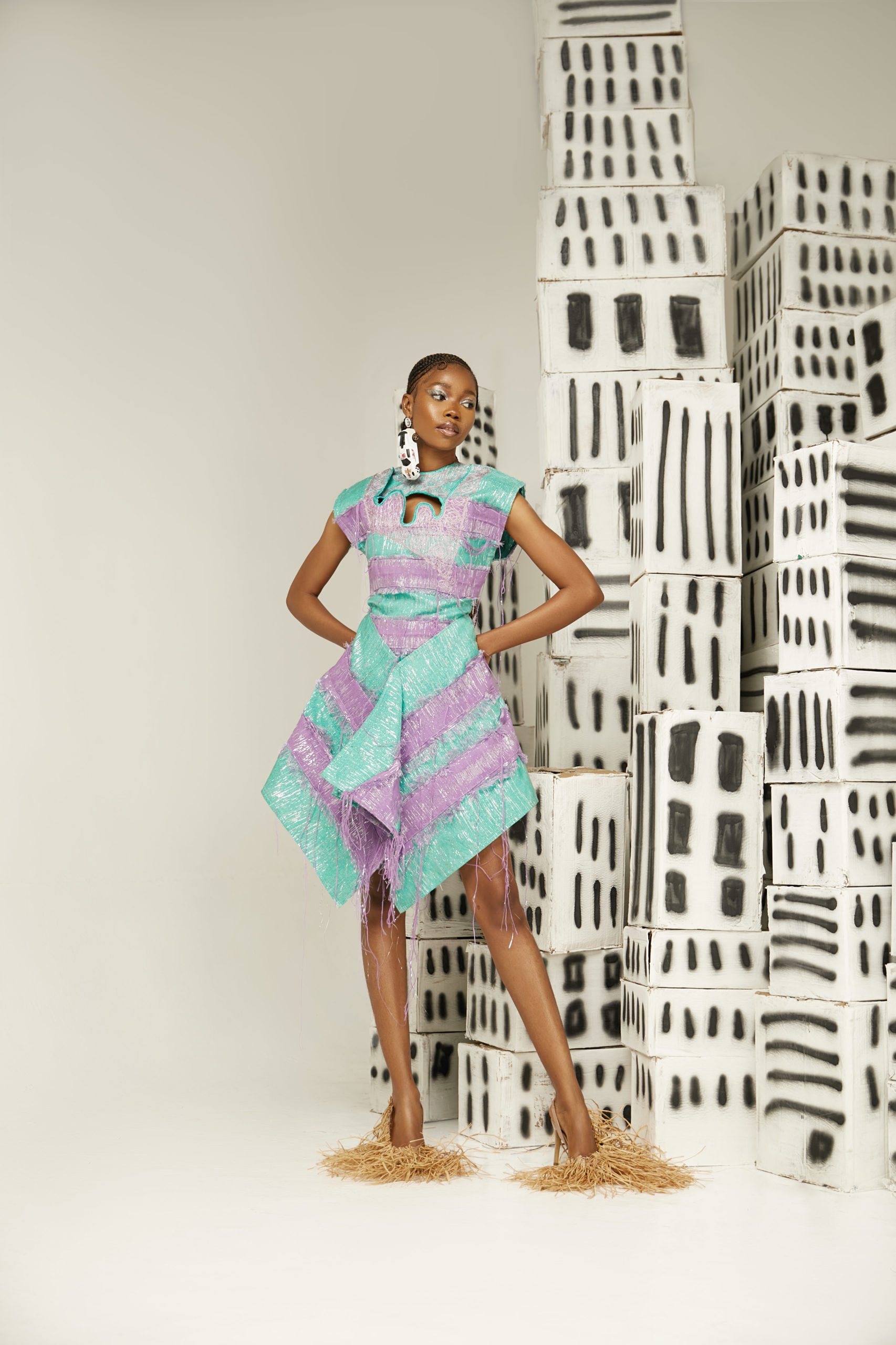 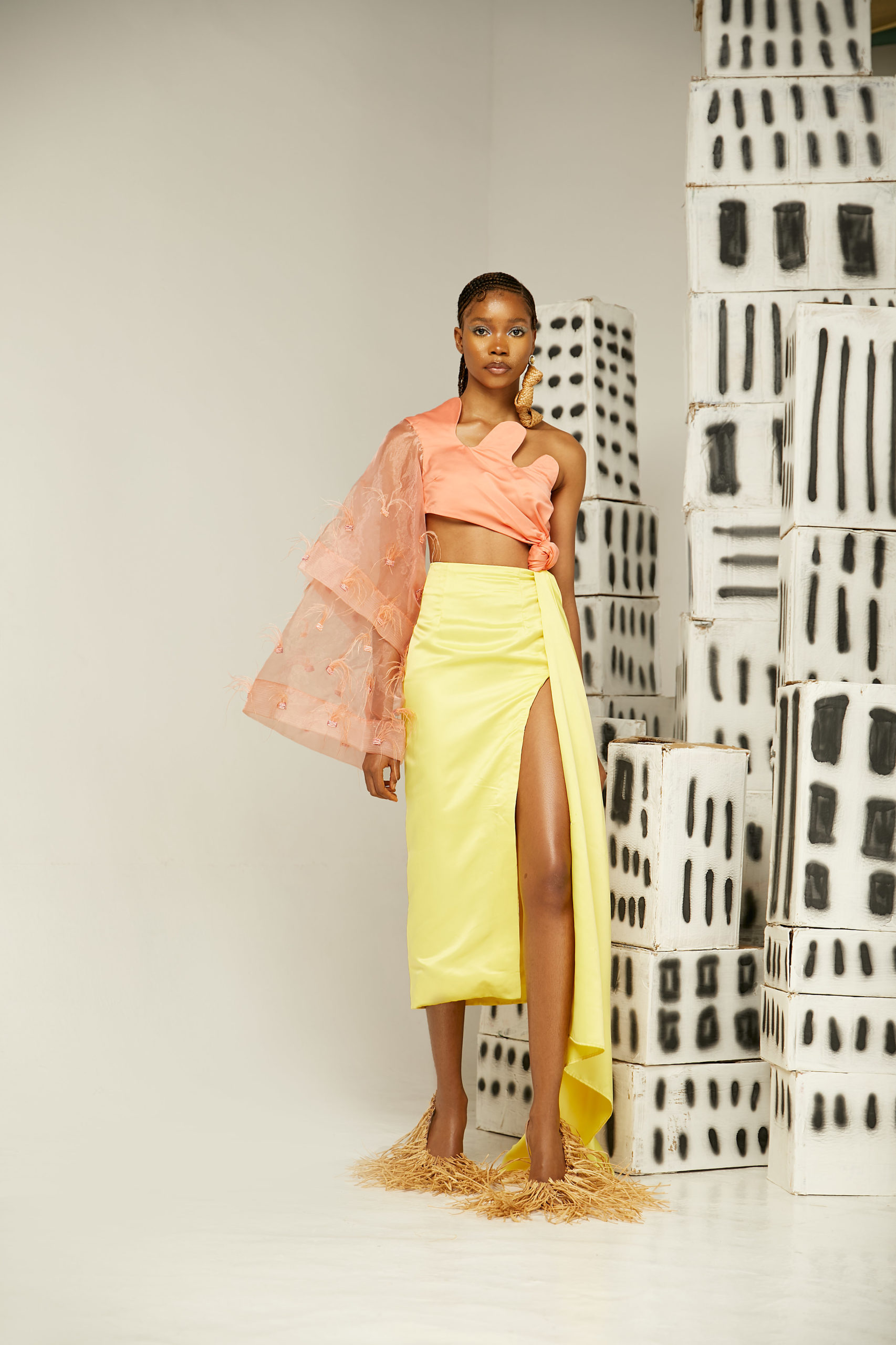 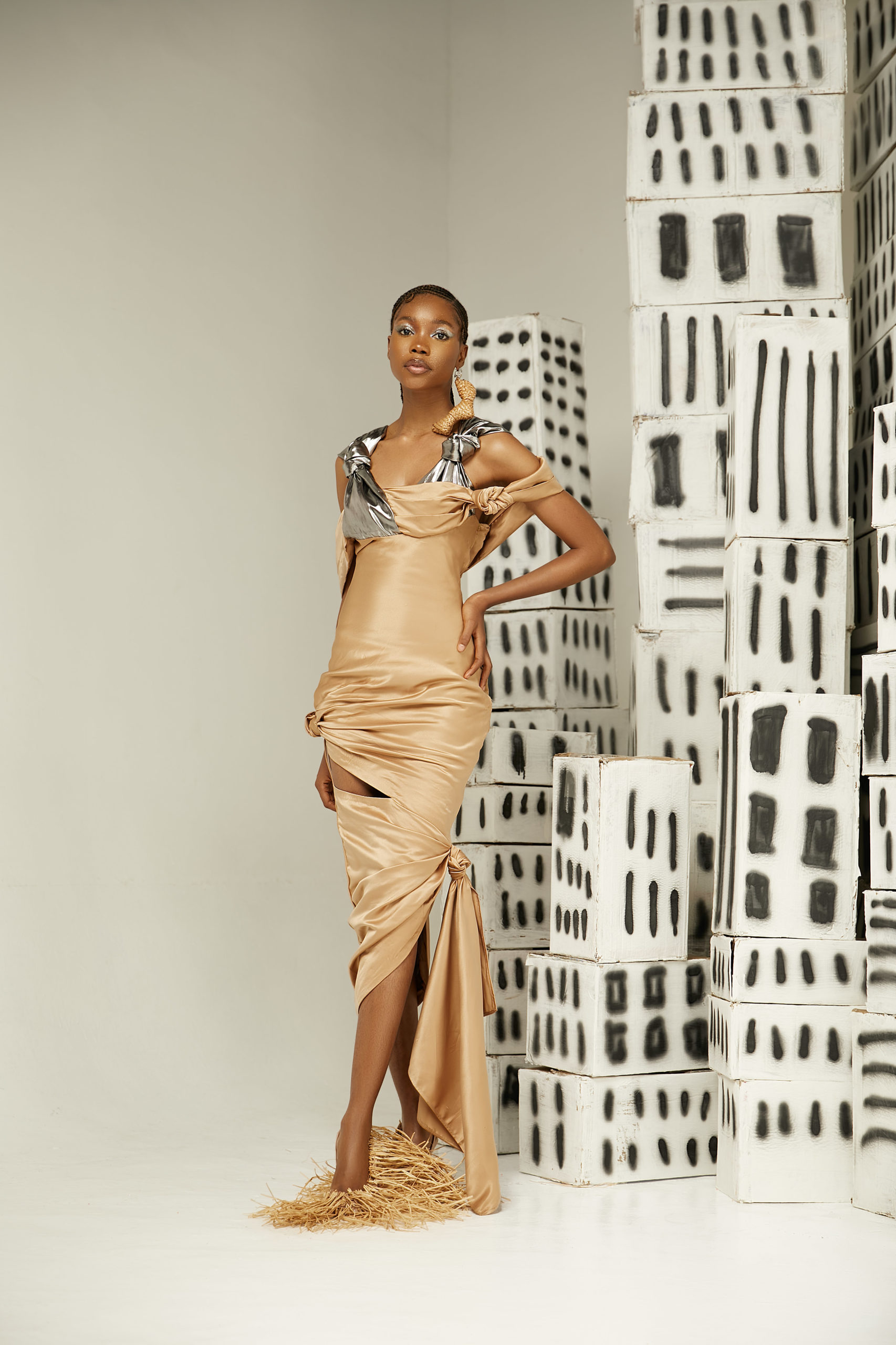 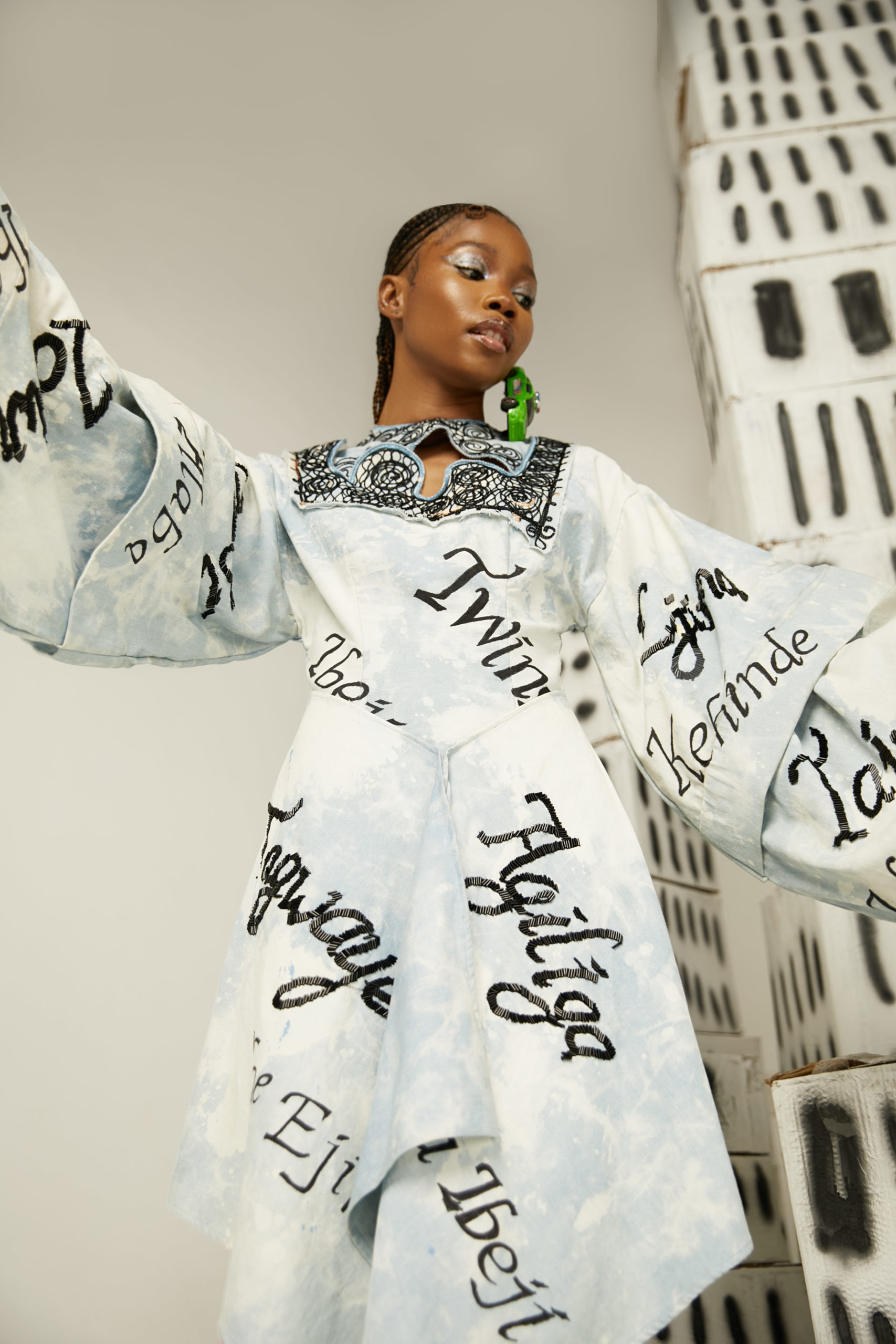 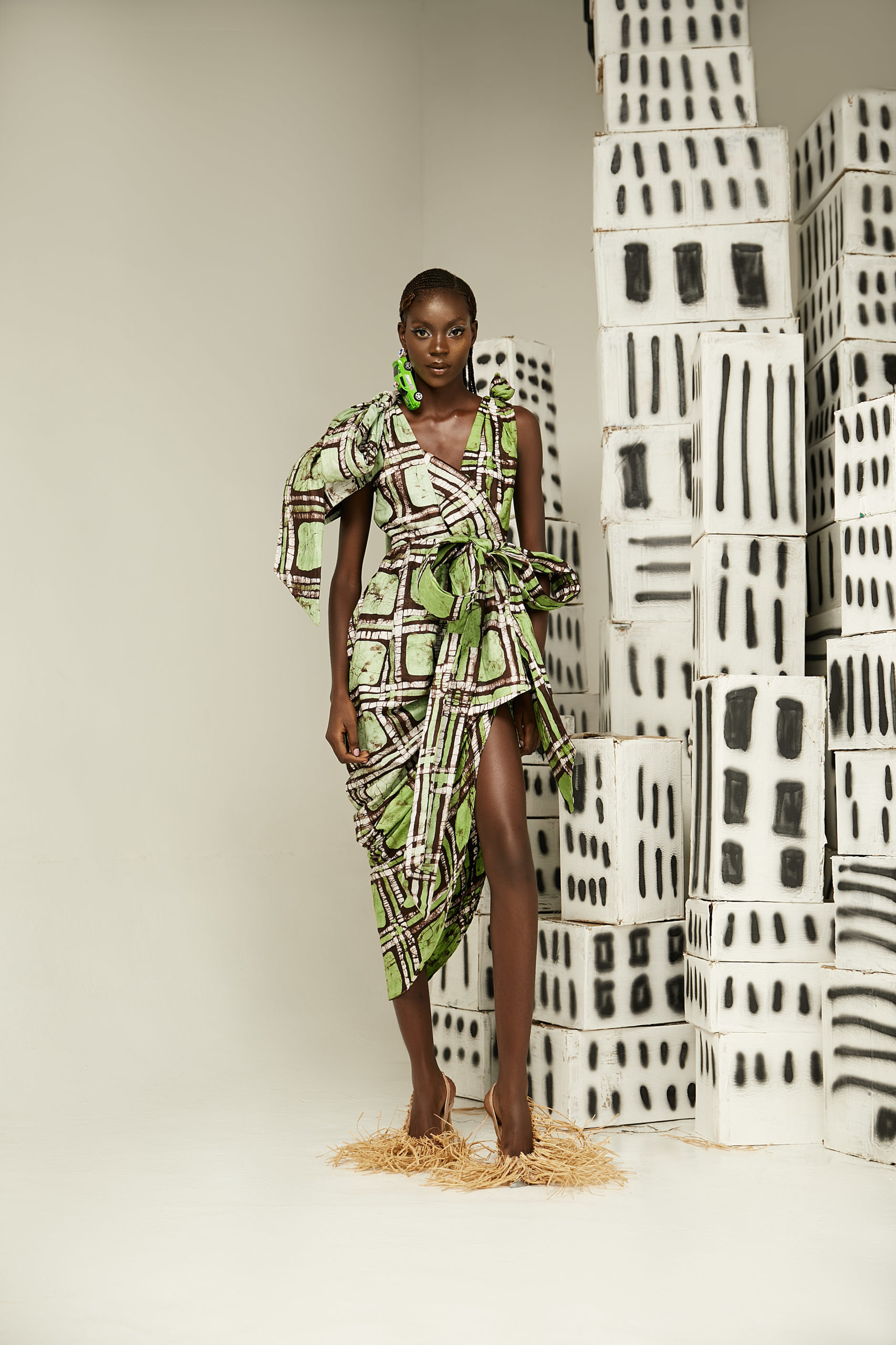 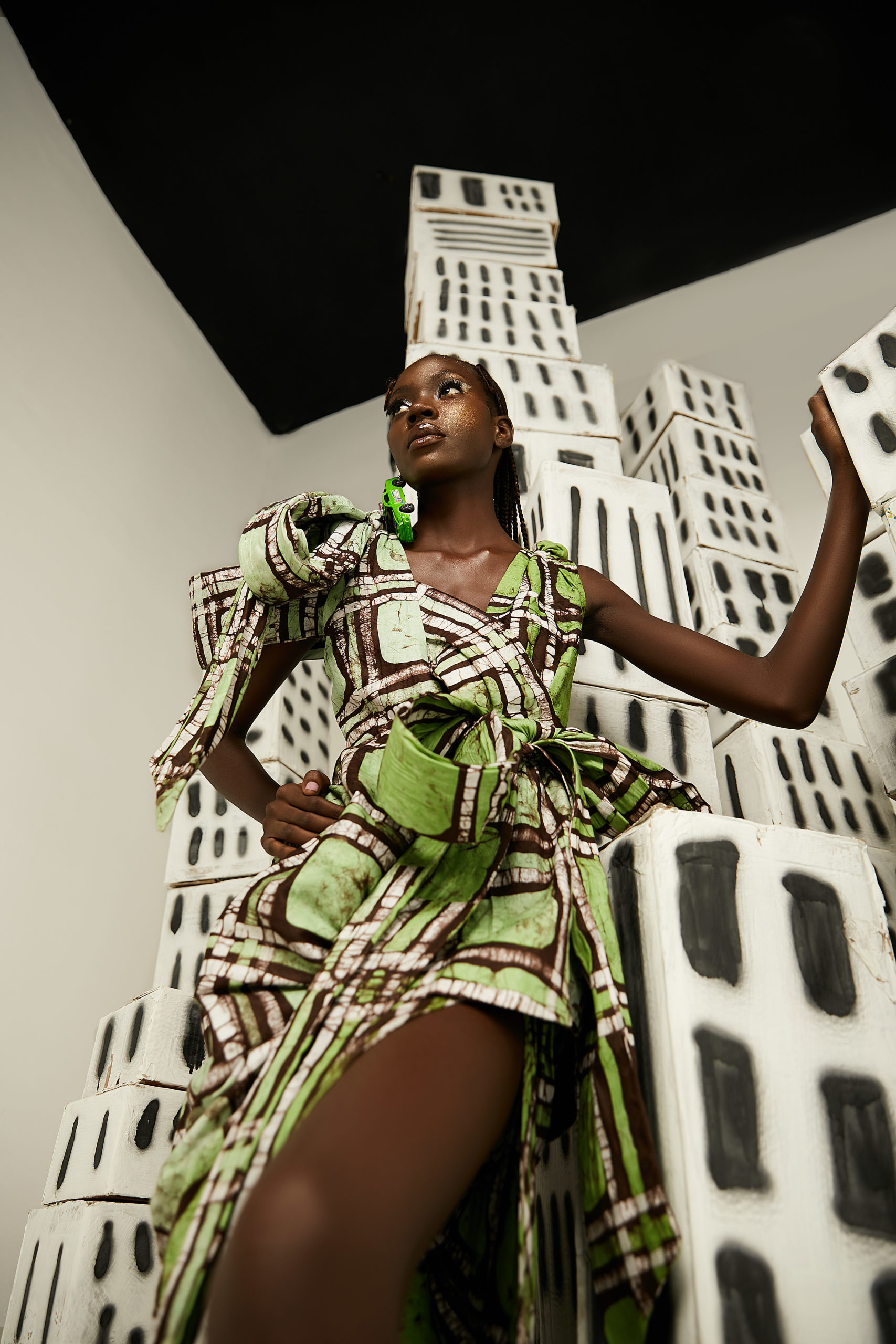 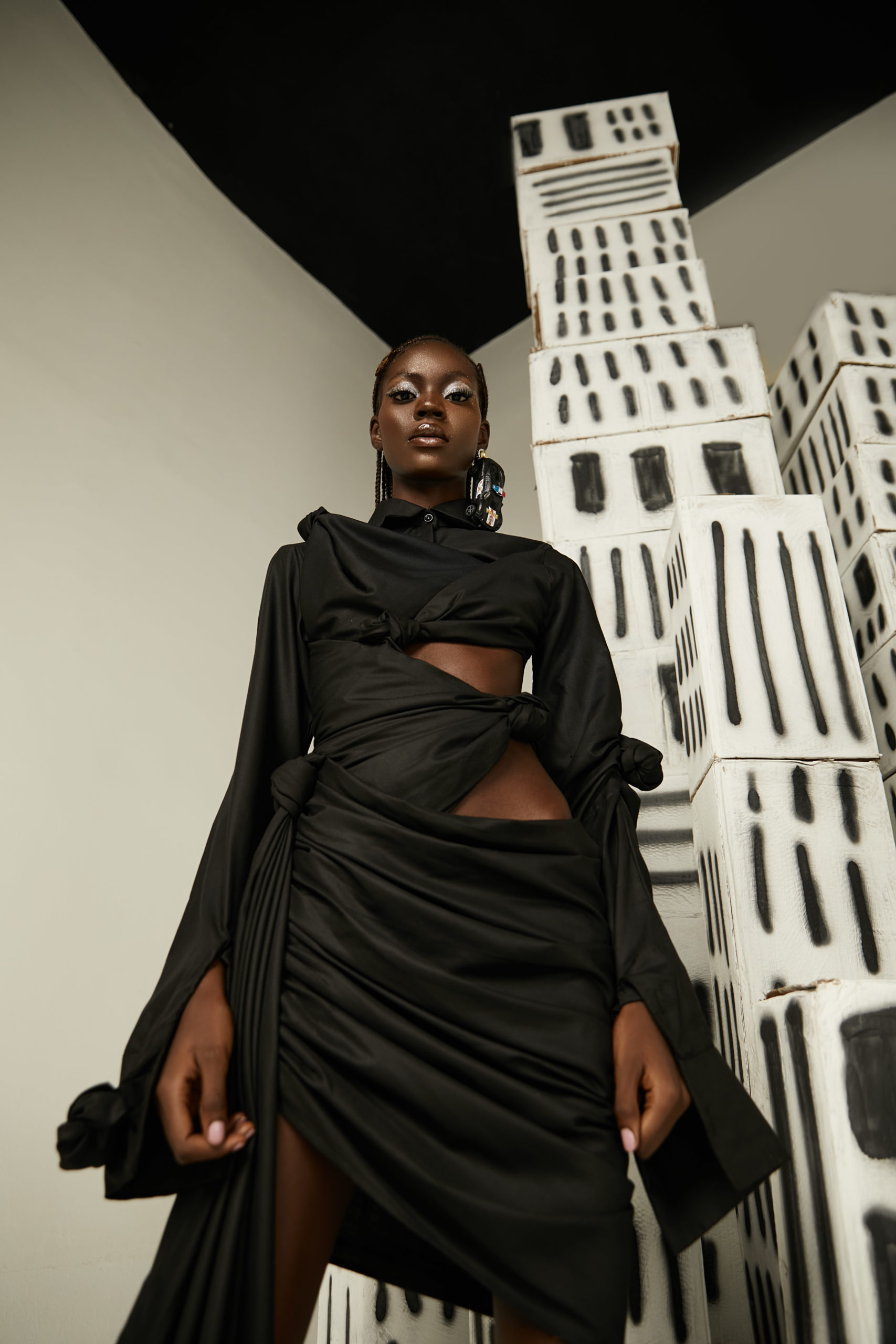 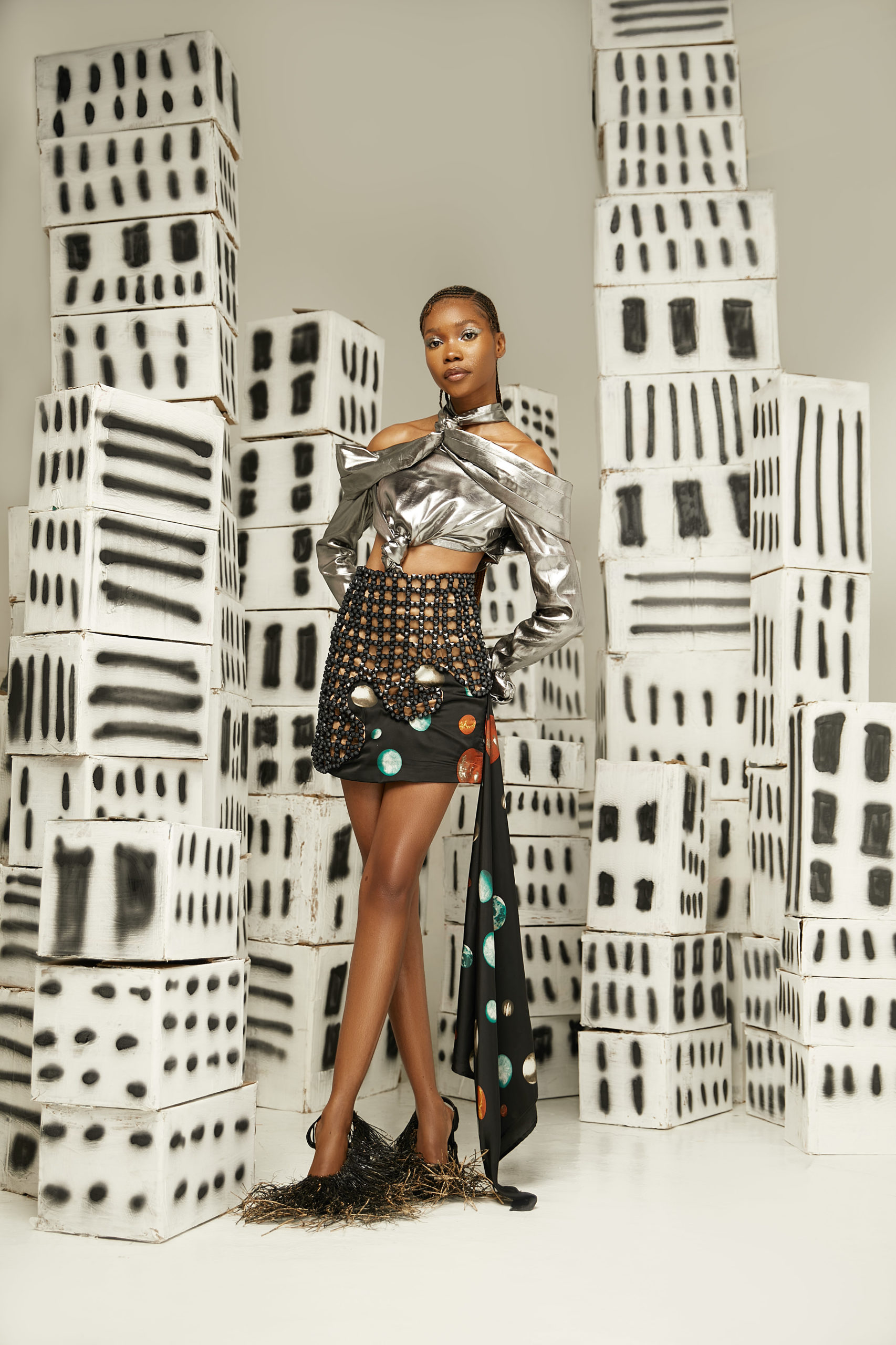 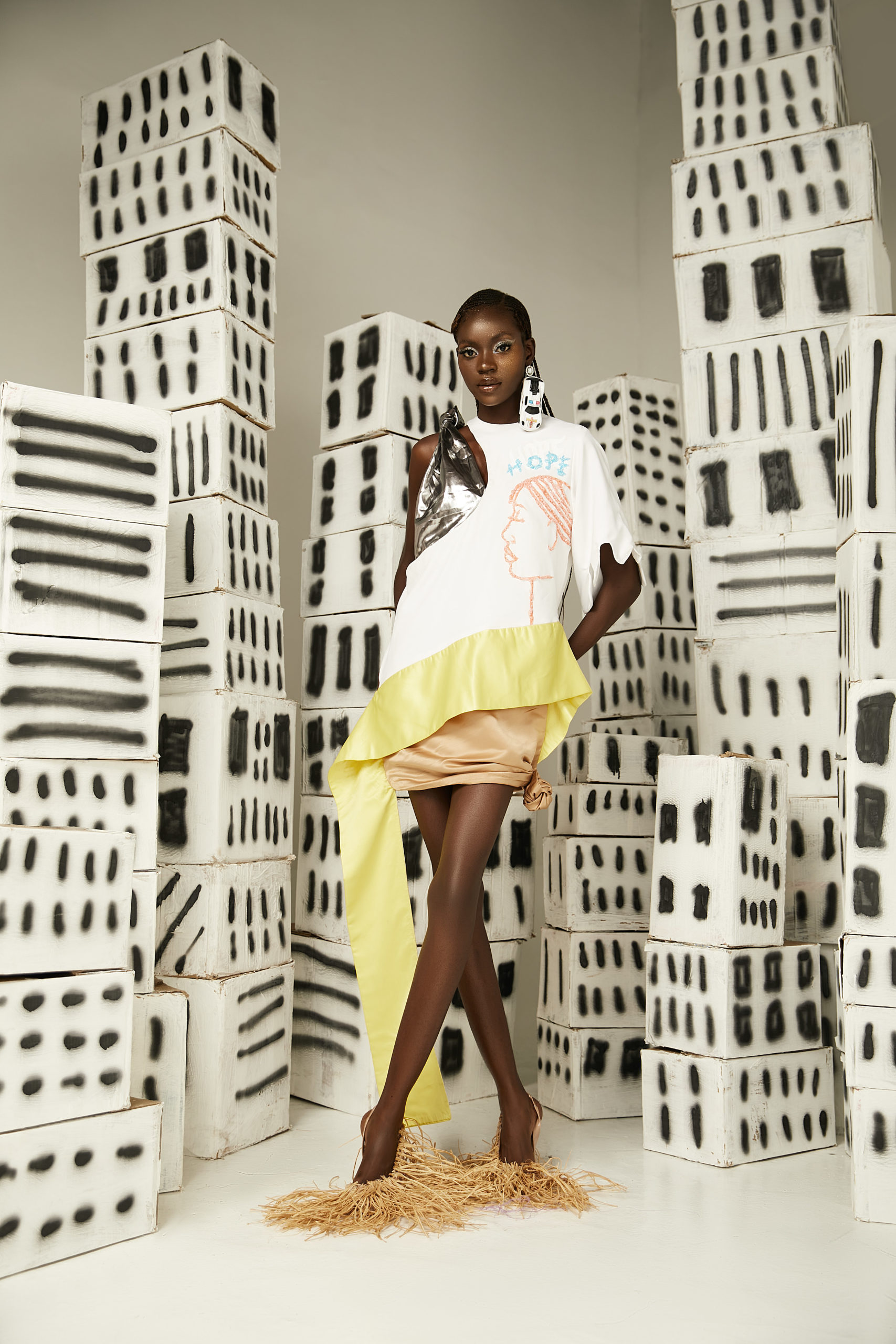 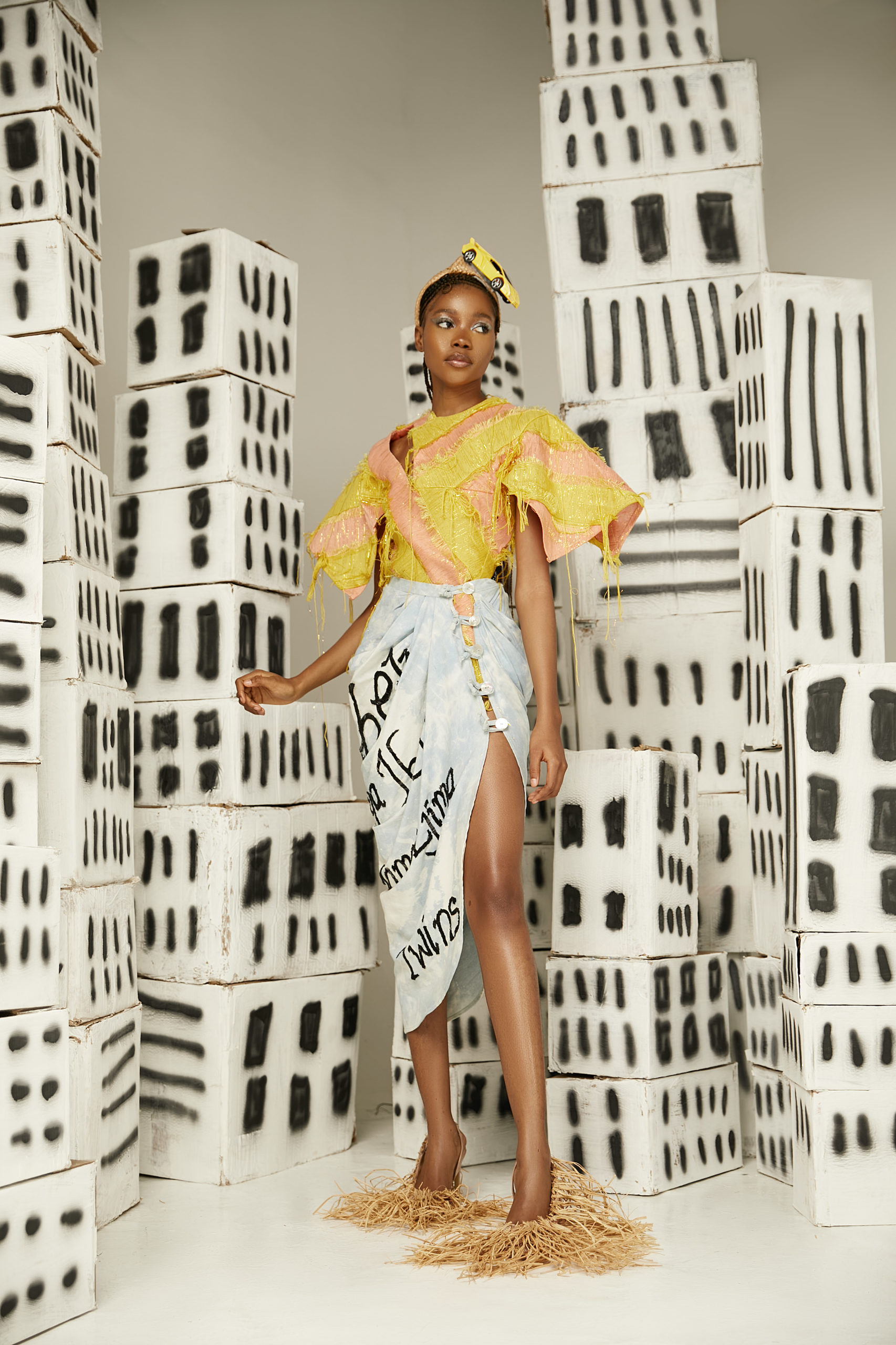 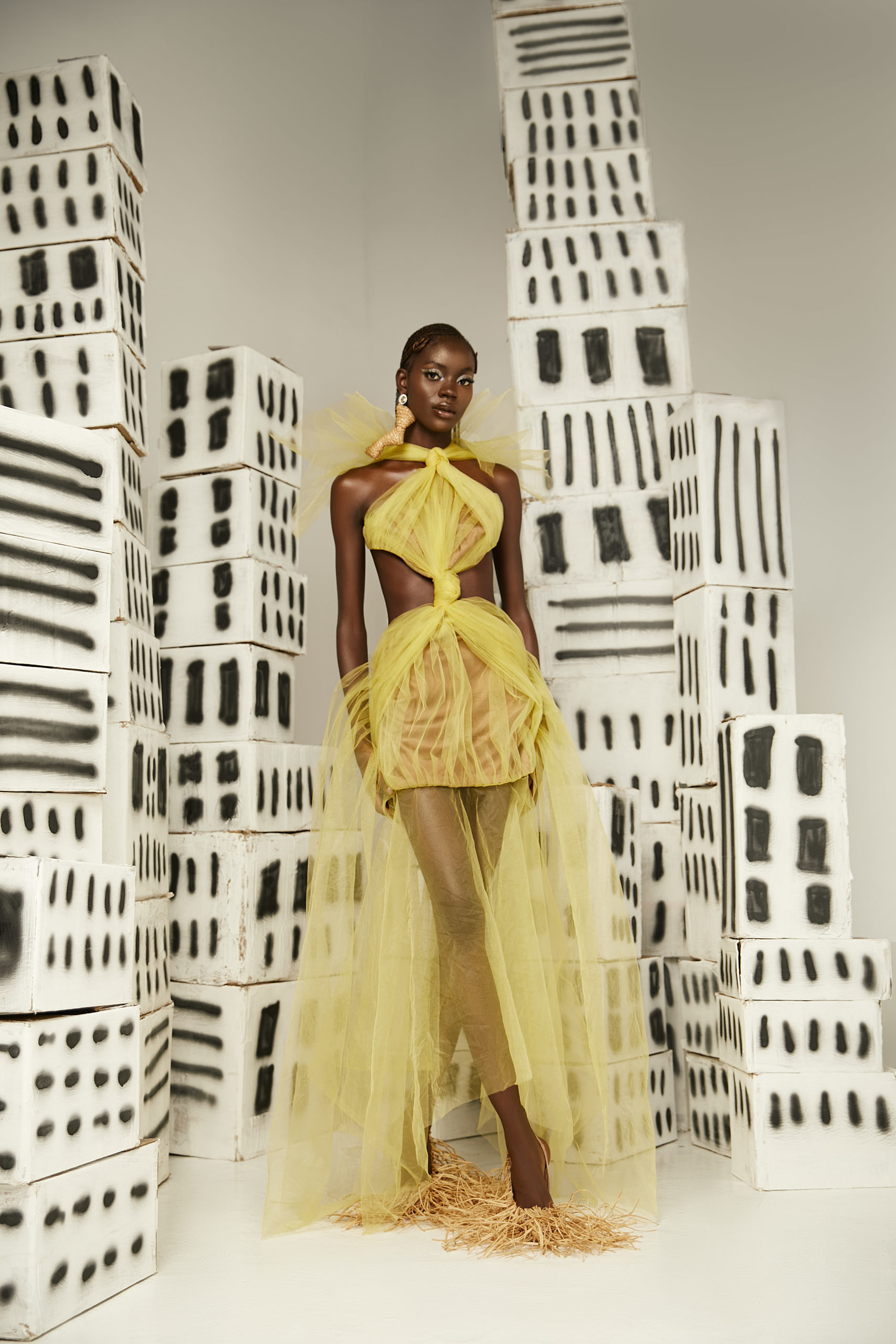 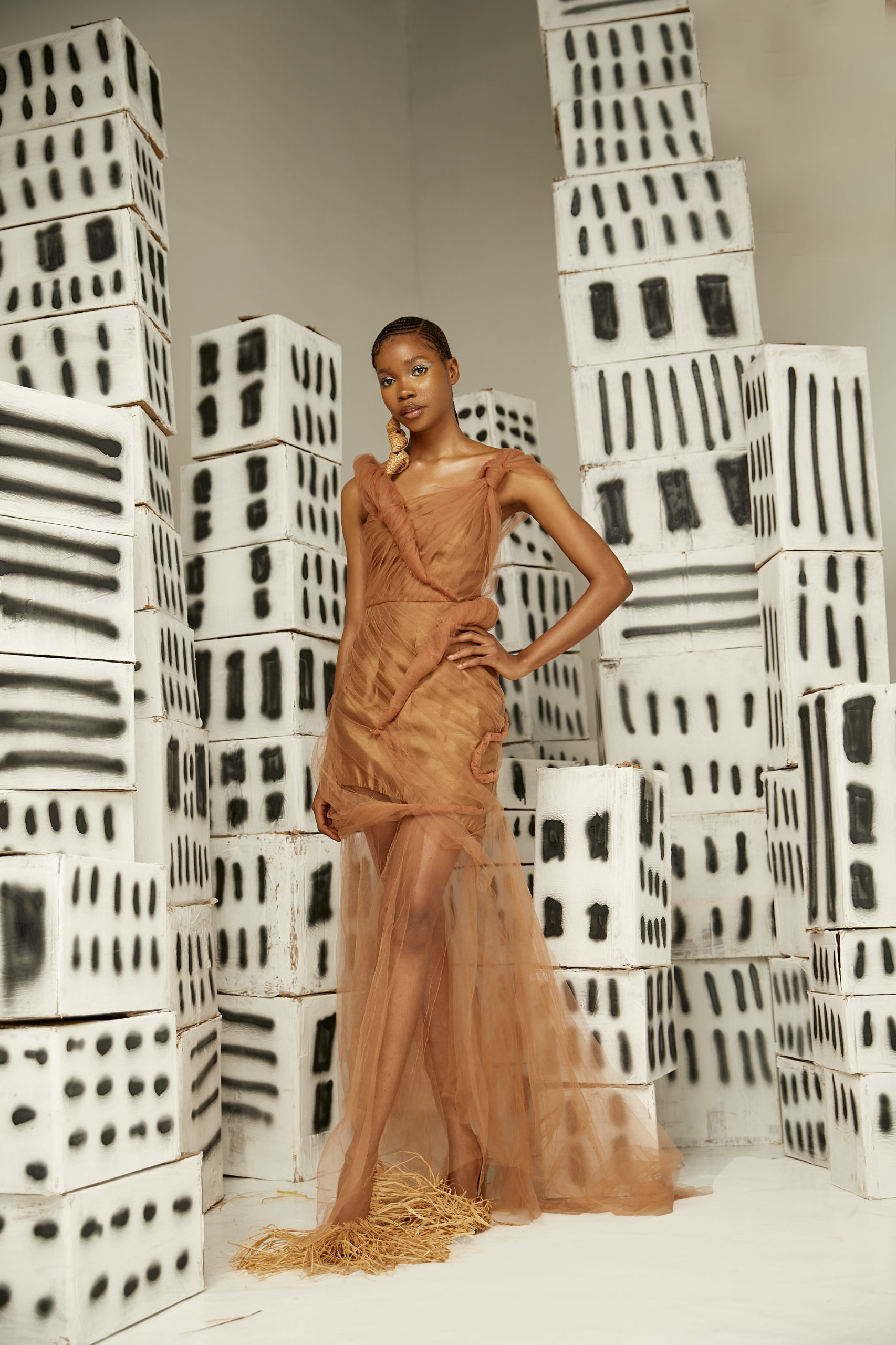 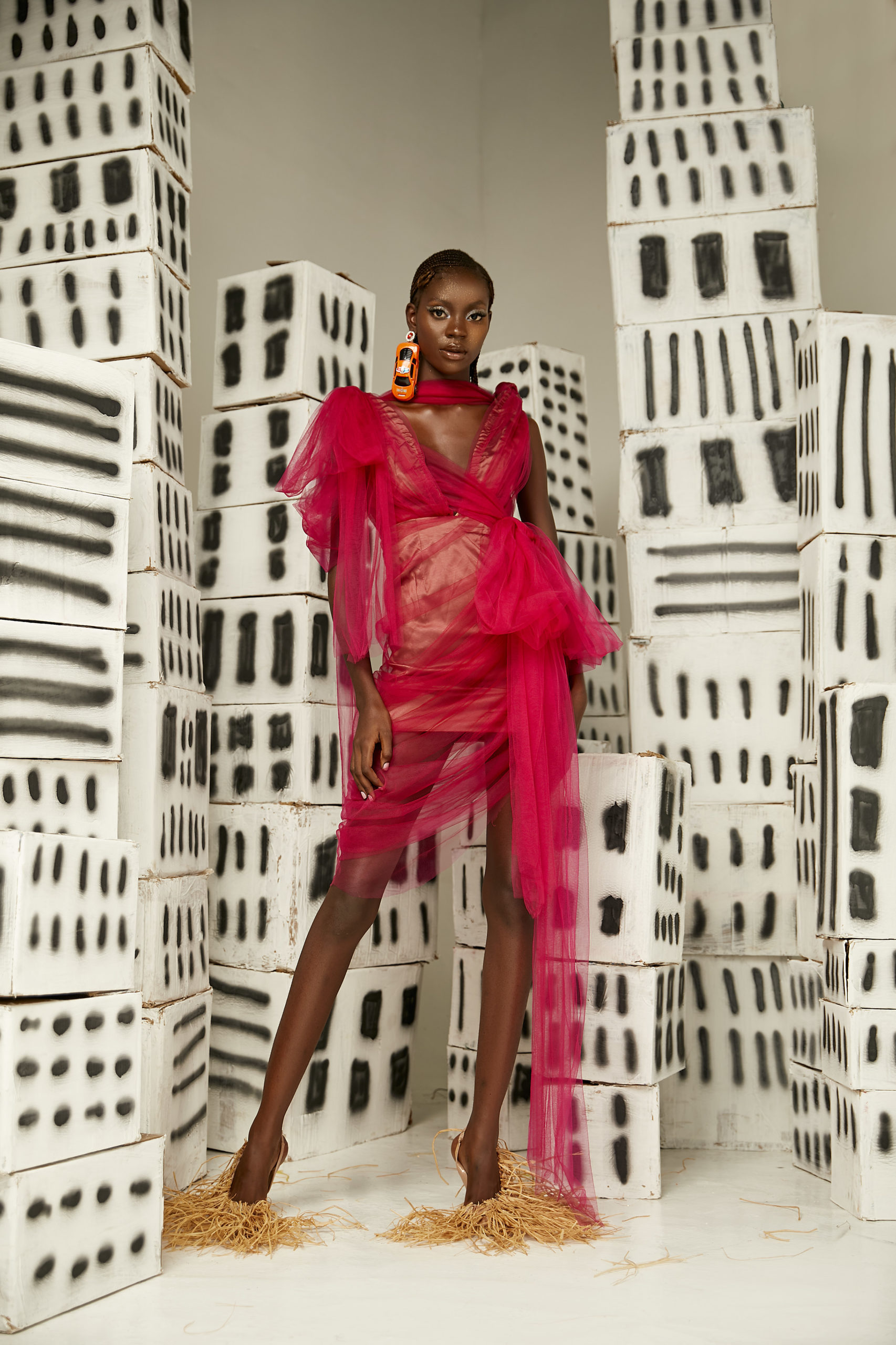 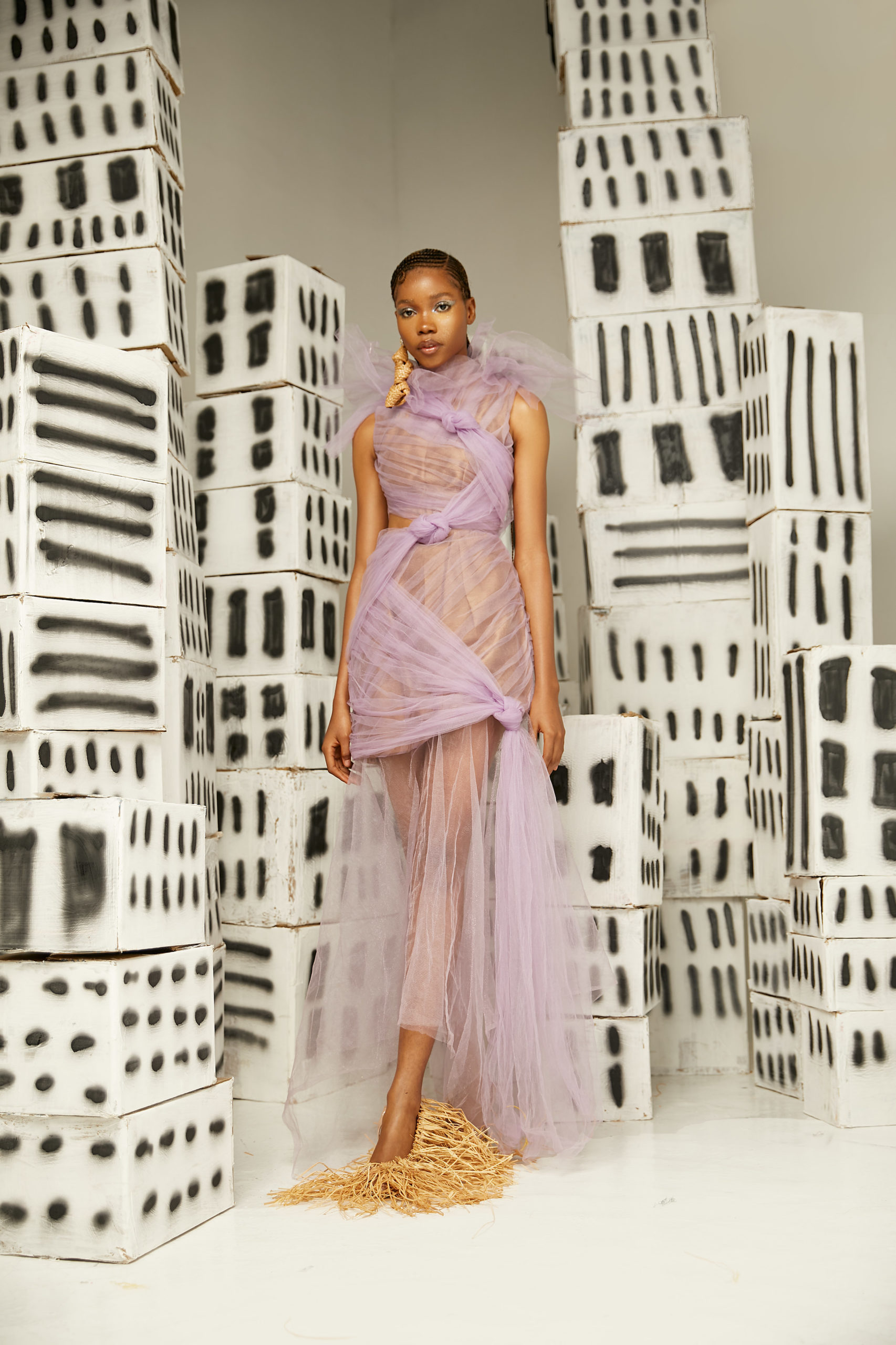 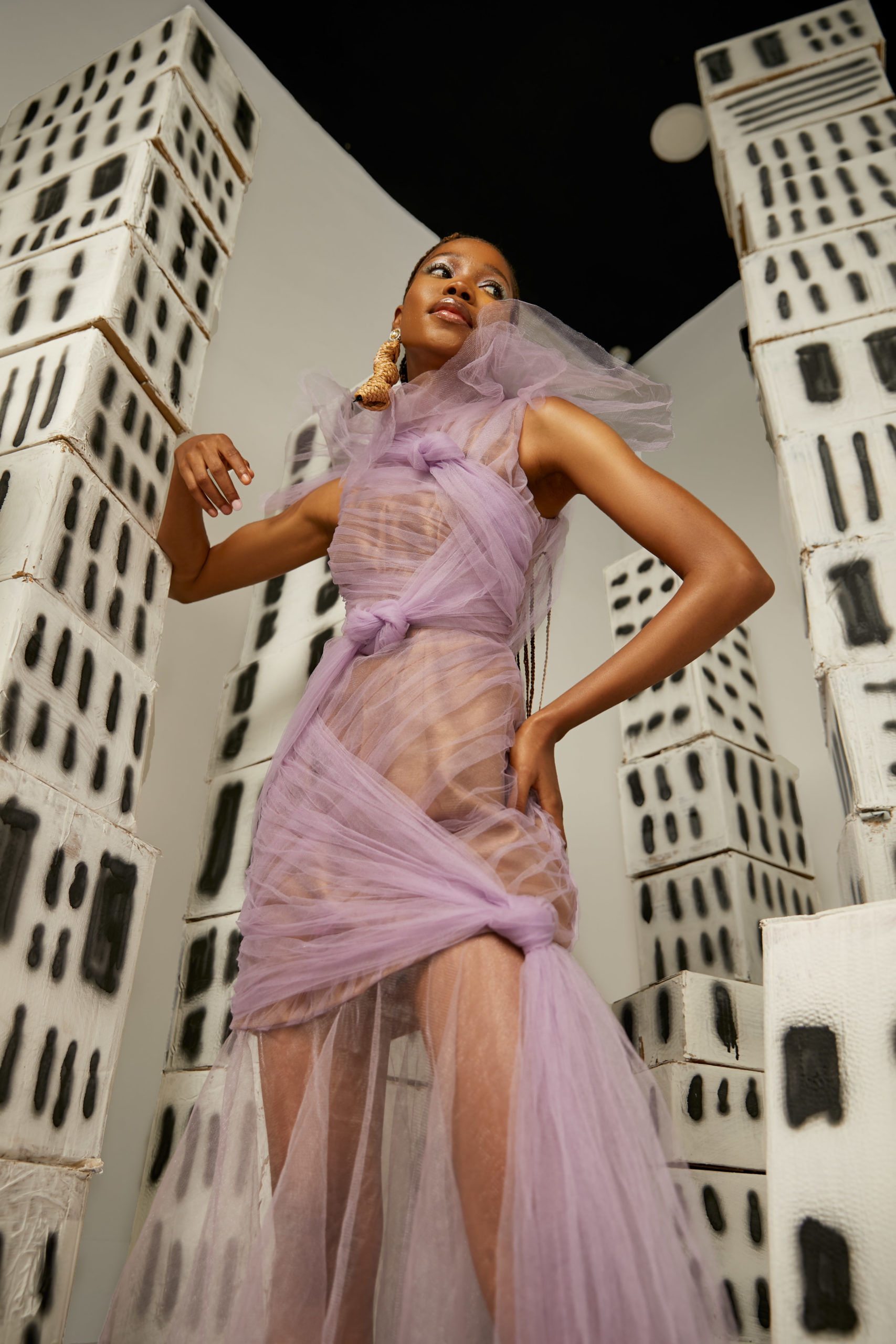 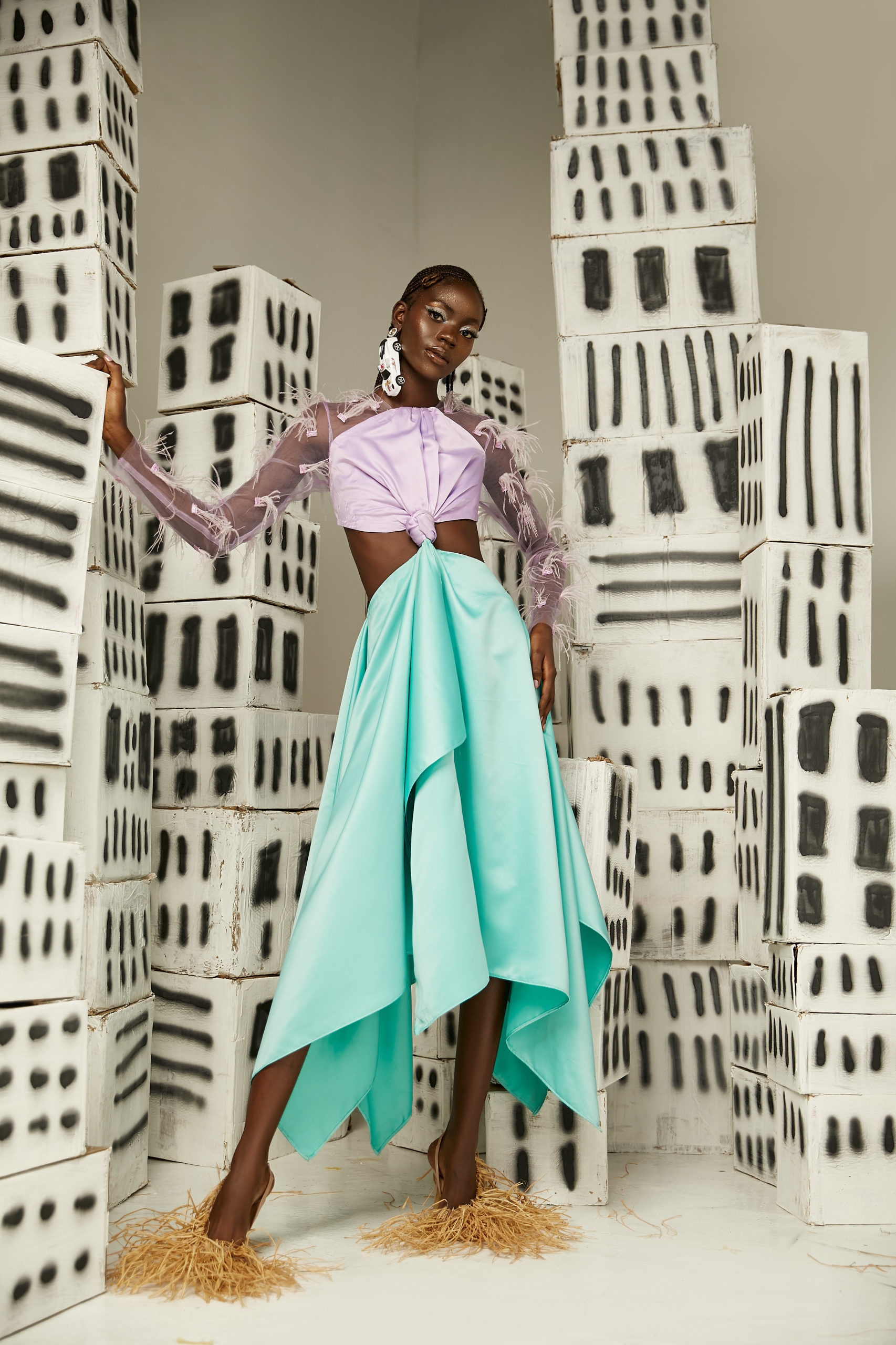 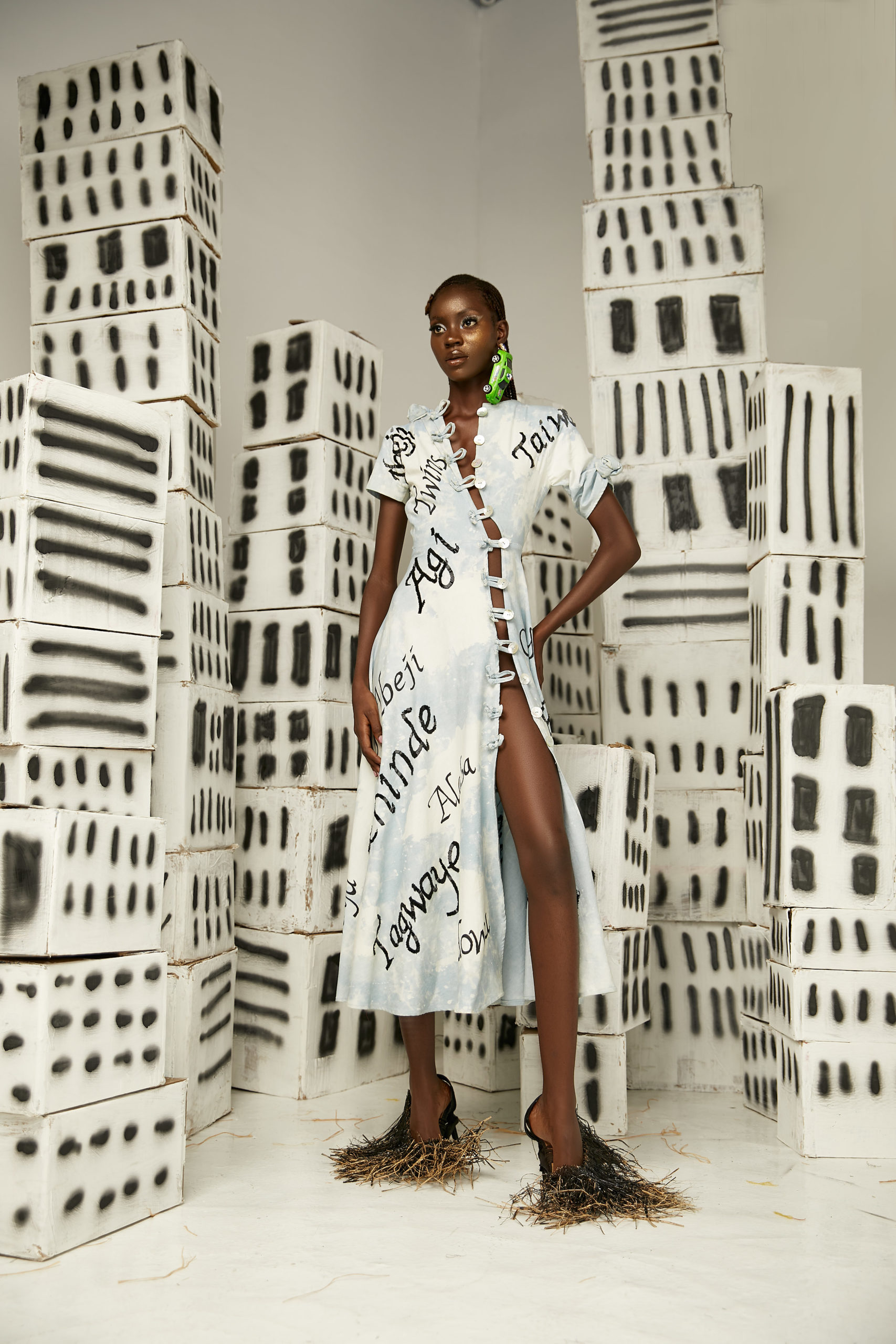