Danai Gurira might not have been up for any awards at the Oscars but my goodness did she win big in the style stakes. The Black Panther premiere and press call ensembles have been a bit of a mixed bag, sometimes great, other times less so, but the style stars completely aligned for her on Oscar Night. It was the case of right girl, right dress, not once (that would just be beginner’s luck), but twice. One can’t help but do an internal victory dance when an African girl is killing it on the Red Carpet. As with football, it was a game of two halves, with Danai having to wow at the Olympics of Awards Seasons Fashion. the Oscars, first. 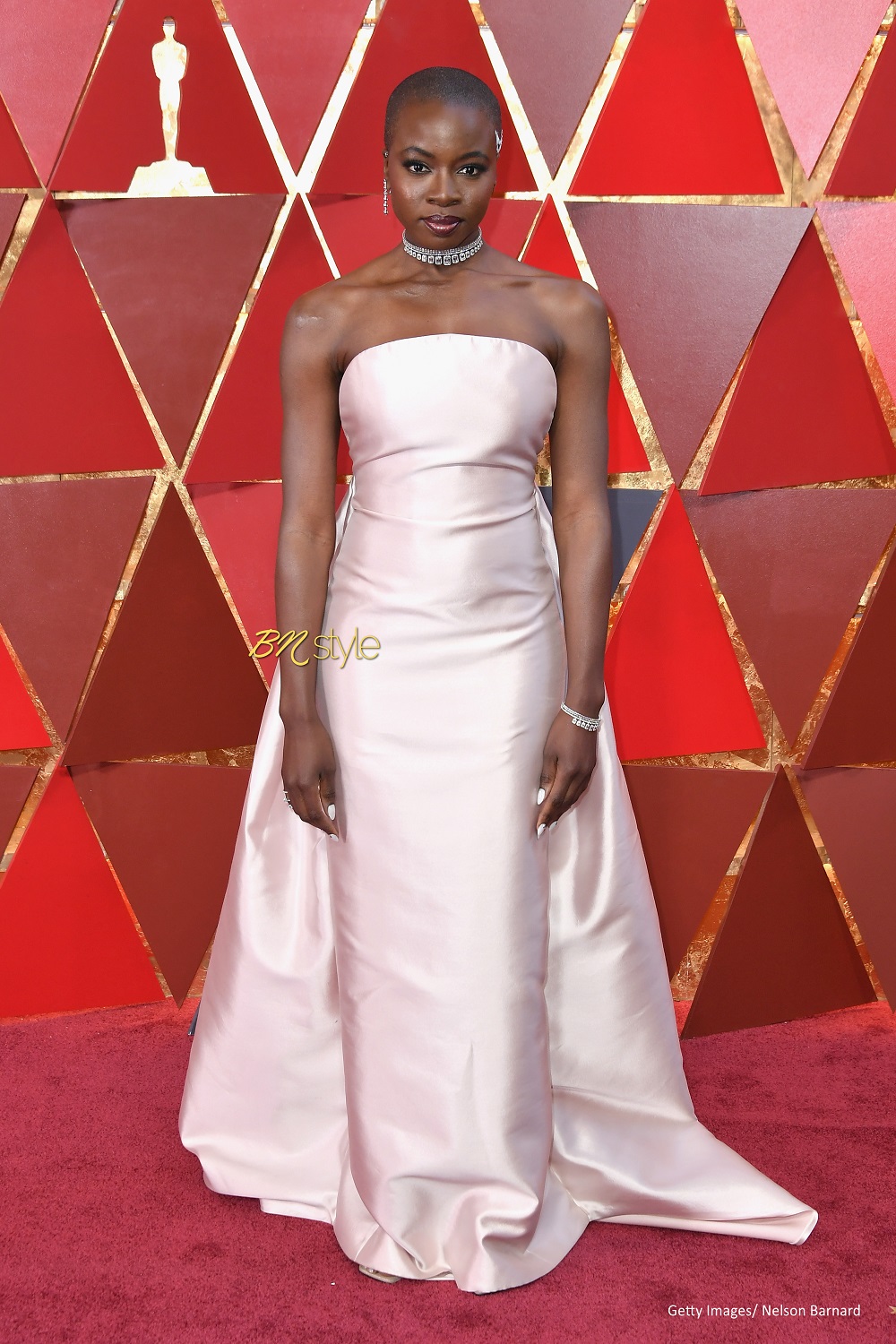 Danai’s choice of a strapless blush pink Gabriela Hearst gown, was inspired on numerous counts; the colour sang against her skin tone, the column shape showcased her enviable figure to perfection and most critical of all she seemed super comfortable in it. Top marks for the Messika jewellery, wearing a diamond choker is completely the way forward when you have clavicles like Danai’s and the matching bracelet was charming too. However, the single diamond cuff earring wearing was an inspired rebellious touch. True style is always about knowing the rules and then bending them just-so to fit your whimsy. 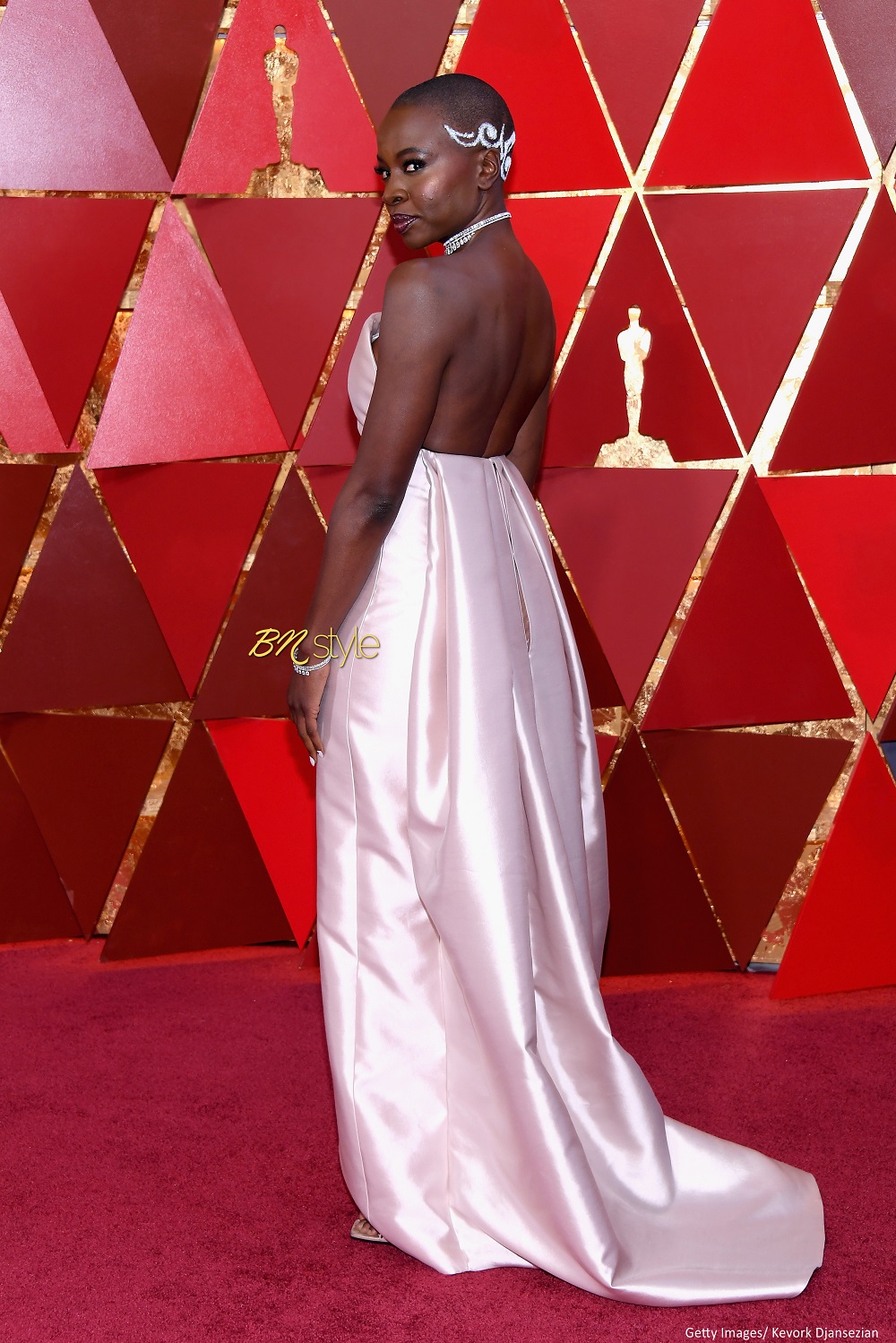 Also well considered was how the dress continued to surprise and delight from numerous angles. The puddle train with almost Edwardian silhouette from the back was an antidote to the clingy show-us-what-you-got cliches that are usually served up on Oscar Night. Dania also proved that yes you can wear a low back and not look like Miss Booty-Bounce or similar, in fact the finished look will give you something of a racy princess vibe, and that can only be a very good thing. 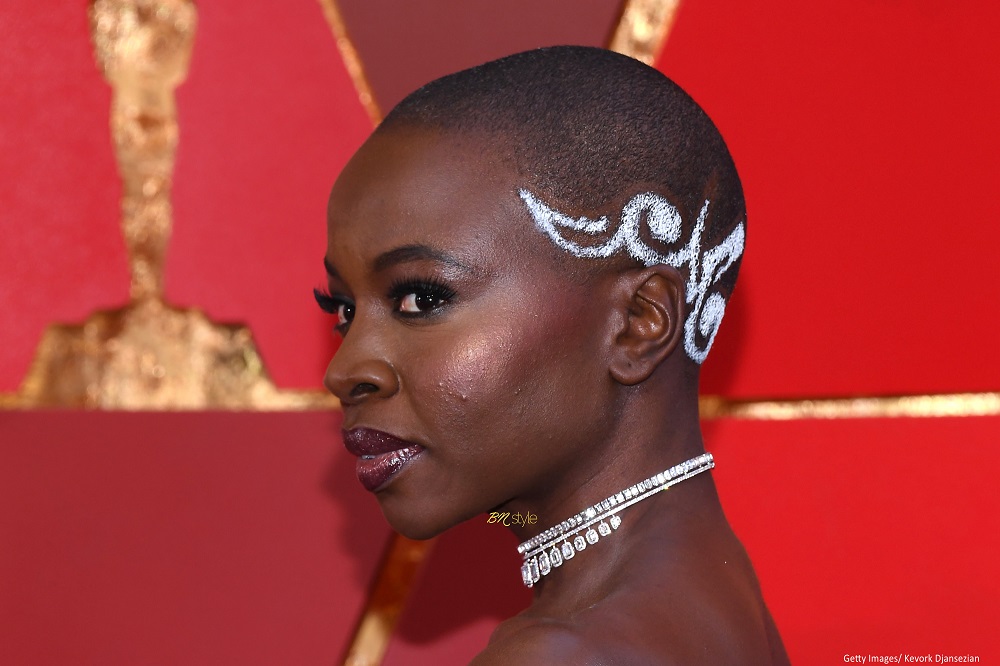 The beauty look is where Danai didn’t just take the crown, she also grabbed the prizes meant for first and second runners up as well. Observe the magic and wonder that is a shaved head adorned with what can best be described as hair art. This is where beauty and politics and owning the multifarious ways African women can be beautiful segue into this one inspiring, exciting and in a world of follow-follow sameyness radical moment. Wigs, weaves, braids crochets. little crops, they are all fantastic but so too is a head shaved to a Number 1 or is it 2, and guess what you won’t lose an iota of your femininity in the process. Also lovely is the make up. No crazy contouring required, just  blush with what looks like a sweep of iridescent powder on top. The sheer plum lip complimented rather than fought for top billing with her dress and the only obvious high glamorous addition, hair art excepted, was mega-lashes and a defined brow. Well it wouldn’t be a Red Carpet look without a dose of maximal-ism somewhere? 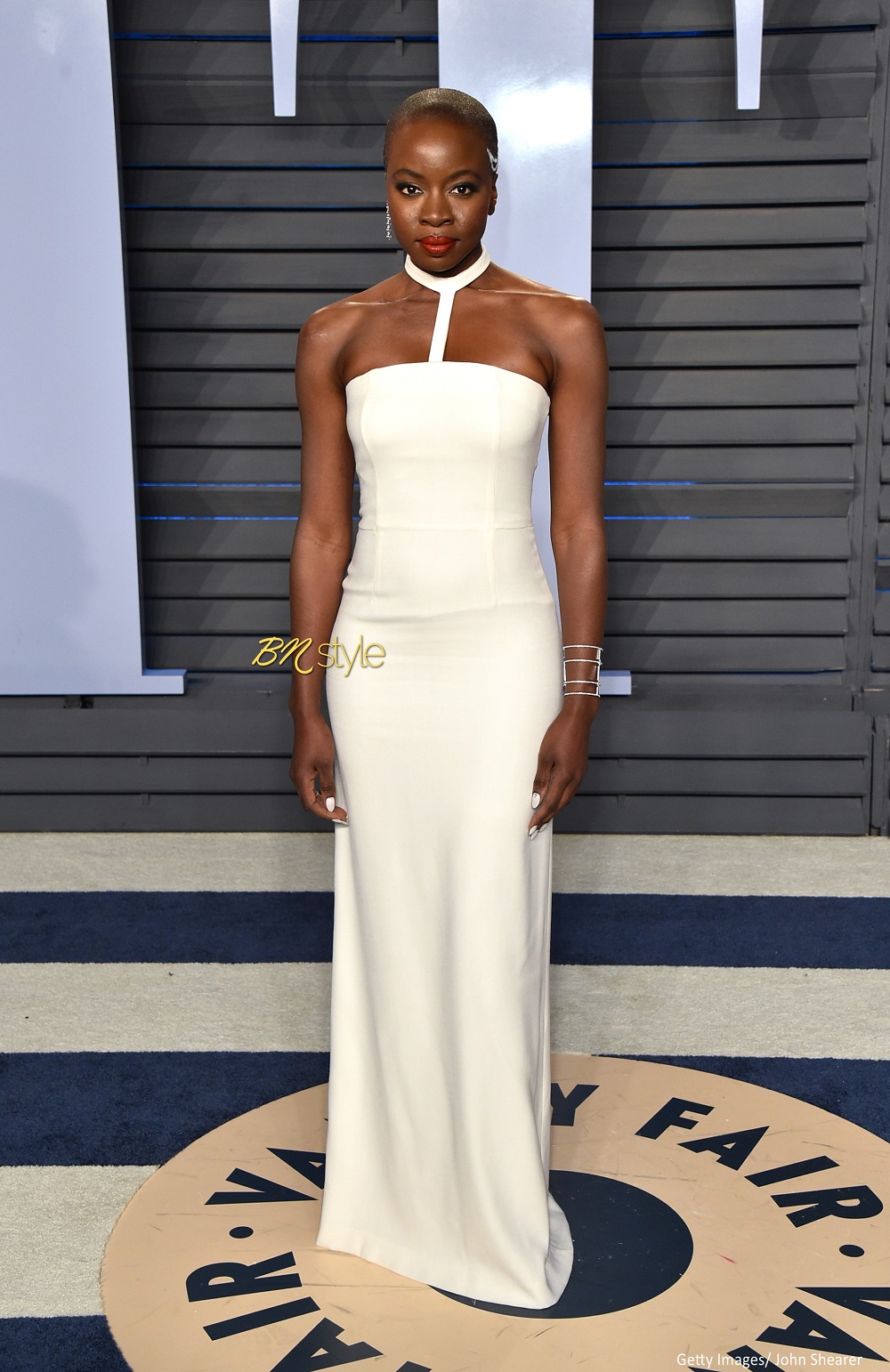 Later on for the night’s second half and  Danai was back out and like a true pro, in another sick ensemble: this time for the Vanity Fair Oscars Party where she proved that style favour was there for the taking, you just need to have developed a good relationship with a designer, in her case Gabriela Hearst. As the Vanity Fair Party is historically, the actual groove so to speak, she dispensed with the Old Hollywood Glamour and went for a low-key but still super-hot dress. Now this phrase might seem peculiar but an obvious dress would have been tight with palettes or a super bright colour or slashed down to who-knows-where. What we had here, which in turn makes it special, was a figure skimming rather than clinging ivory silk jersey, with a harness like neckline. Danai didn’t drop the ball with the jewellery either this time accessorising with a geometric diamond cuff. The luxury that is carrying no purse is tantamount to saying I am undeniably A-List and somewhere in the room is an assistant with a purse that has all the essentials, after all a purse, even the tiniest of clutches would draw our eyes away from the ensemble and the lines therein.

Make up was as we had seen before BUT with one critical addition a full-on red lip.  Danai’s pout and sidelong glance exudes confidence and one can bet money she knows that not only does she look smoking hot but that she has peppered everyone with her one two punch of dresses, make-up and jewels. This is not slaying, this is arriving in your army tank, aiming your fully loaded RPG and taking out a town  of Wannabes, Never-Gonnabes and Has-Beens of the Red Carpet for good measure. A moment of silence for the dull and boring dressers of years gone by who are no longer with us.

Most significant of all is the fact that Danai is testament to the power of the late bloomer. A playwright and activist in addition to her acting credentials on stage, screen and television, she has quietly built a career of substance and breadth. At forty, one senses a woman truly in her prime who can give us glamour, edge and in her spare time a worthy cause to champion. All Hail the New Style Queen.

Must Watch: DIY Runway Shows Is The New Normal For These Fashion Forward Influencers