All good things must come to an end, and so it is with LFDW which concluded last night. You would think that after thirty plus hows that fatigue would have kicked in and that collections blurred into one amorphous whole, but as with previous days the really good stood out. Furthermore, all of us on the Bella Naija Style team were still buzzing after hosting the sensational Bonang Matheba to a thought-provoking and lively discussion on the power of style and the role it plays in building and capitalising on one’s brand. Some of the designers who have shown this week would do well to heed Bonang’s advice of consistency of delivery, laser-focus on objectives and not paying too much attention to commentary. 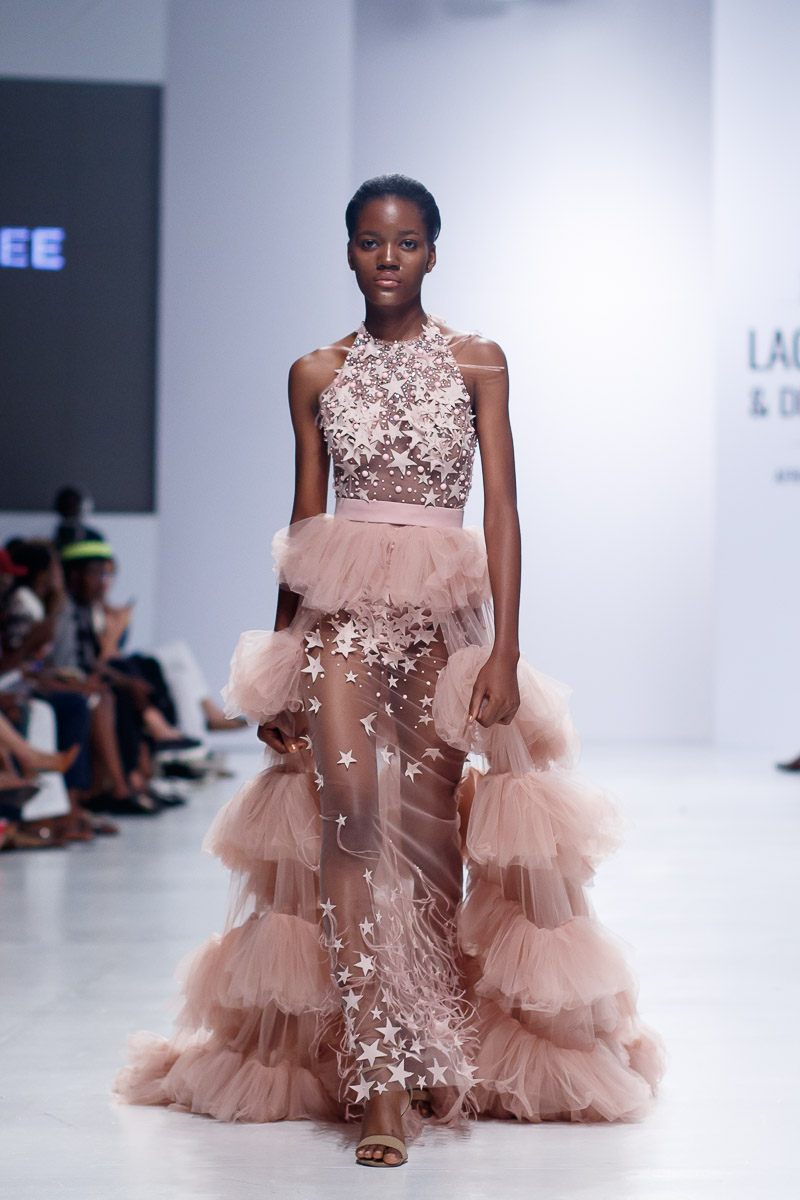 As someone wise said you are only as good as your last effort. And with customers increasingly style
literate and discerning it becomes difficult to hide behind descriptions such as ‘bespoke’ and ‘luxury’. You’ve either got it or you haven’t and fashion is a brutal mistress. One designer who lived up to the ‘couture’ that followed his name on the projector was Gert-Johan Coetzee, who presented a master- class on what it looks like to belong to the ‘100 hours plus per dress club’. His opening looks of bodysuits with fishnet overlays adorned with appliqué stars looked deceptively simple but close up the construction was impeccable. 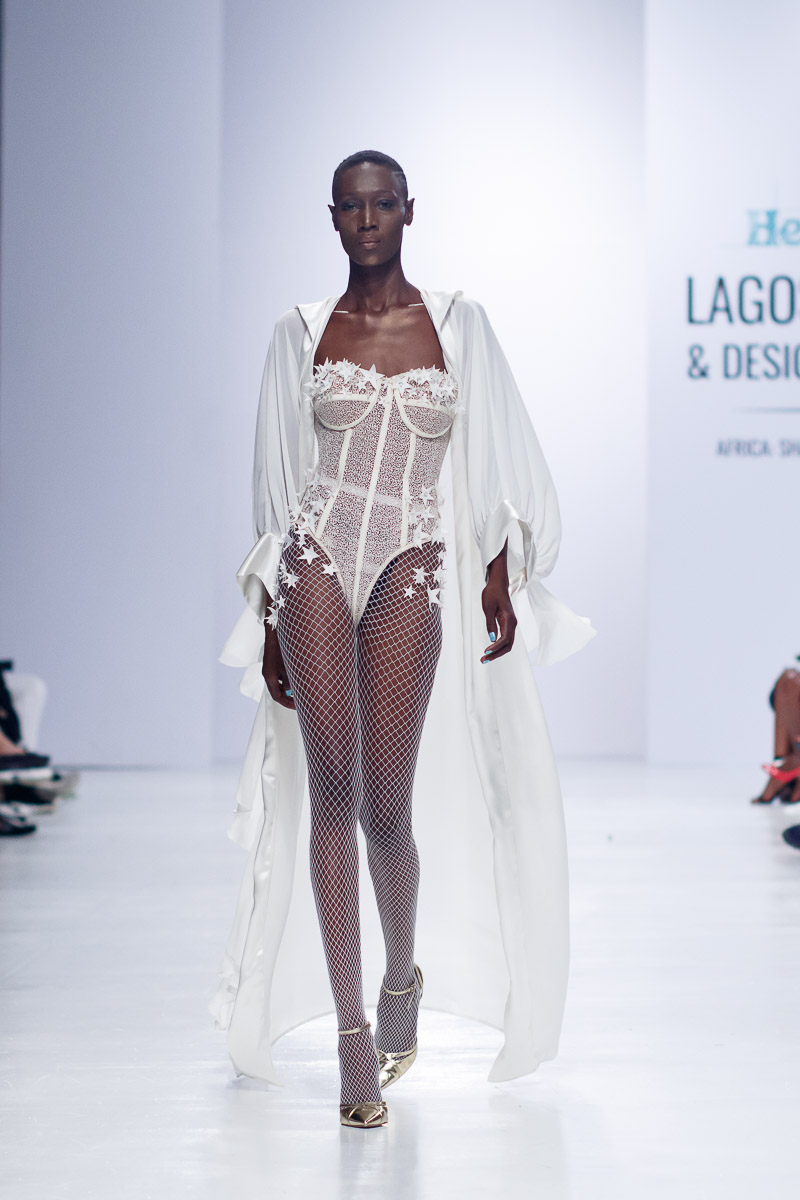 Gert’s pieces have become shorthand to red-carpet glamour, and his long time collaboration with his
BFF Bonang Matheba has resulted in some epic shut-downs at events. The palest of beige silk tulle was overlaid with flat burnt gold square sequins was cut close to the body before flaring into a full skirt. The addition of an ornate gold headpiece gave the effect of couture as both fantasy and armour – made to perfectly fit your body and your mood, and of course shut down events.

This is not to say that it was all full-on occasion wear, models trotted down the runway in cocktail
dresses that would make a ‘Plain Jane’ the best-dressed lady of the night and a rose sportswear inspired pant was as easy as your favourite slouch pants, just a million times better made and constructed. Belts, neck cuffs and t-shirts with either ‘GERT’ or ‘#ALWAYS WINNING’ writ large added playfulness to the otherwise serious business of couture. Because let’s put it squarely a couturier is a purveyor of fantasy, a maestro with cut and texture and only uses the best fabrics and skilled hands to manifest dreams. And Gert does this every time. 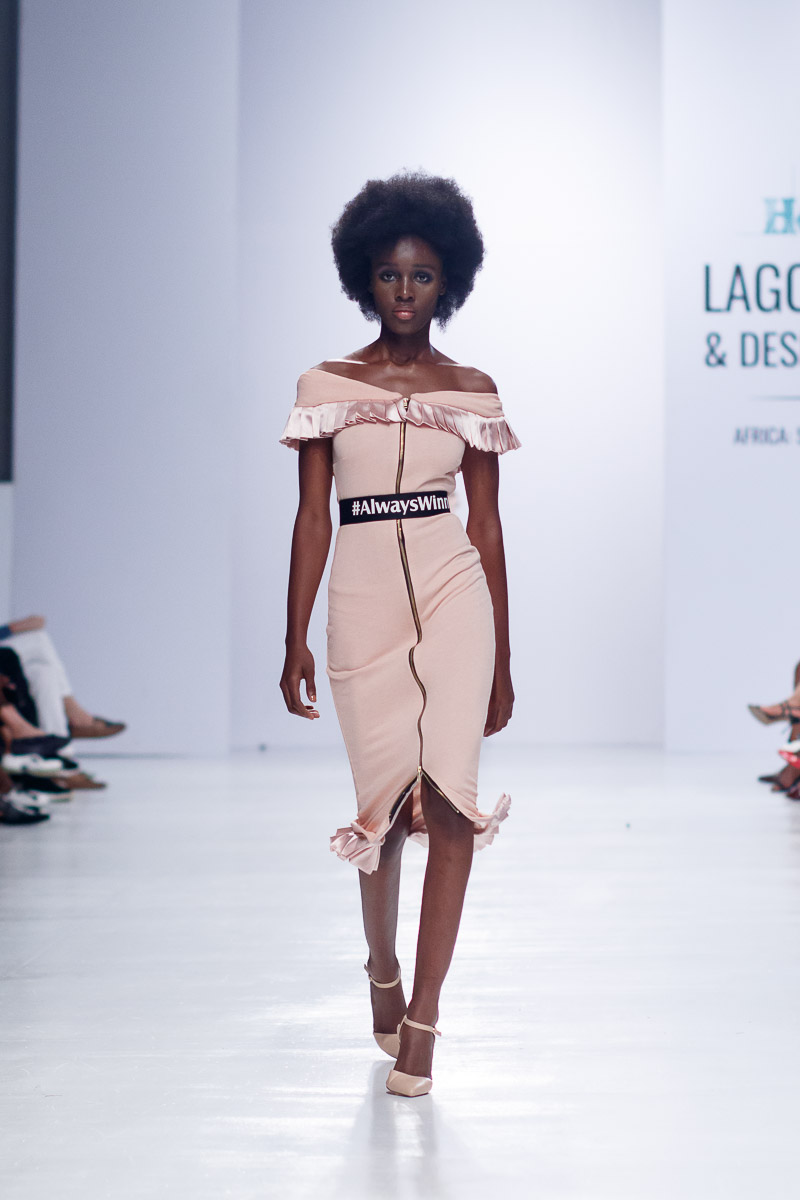 Bridget Awosika has carved a niche for herself as the designer’s designer, with many citing her as a personal favourite. For customers, it is equally clear to see why repeat purchasing is the order of the day, as she focuses on creating beautifully cut clothes. That might sound like a manifesto for bore-snore, but let’s face it, in our busy hectic lives nothing is more luxurious than the saving of time. And if an Uber is 5 minutes away, you just want to go to your wardrobe put something on and know it is going to look amazing. Show opener, the perfect white shirt that one has been waiting for all their lives, was breathtaking in its simplicity and genius. An Inverted pleat in the sleeve and hem gave the impression of the wearer being a flower in bloom. Teamed with a simple but impeccably cut black trousers and the Gbam! The moment was complete. 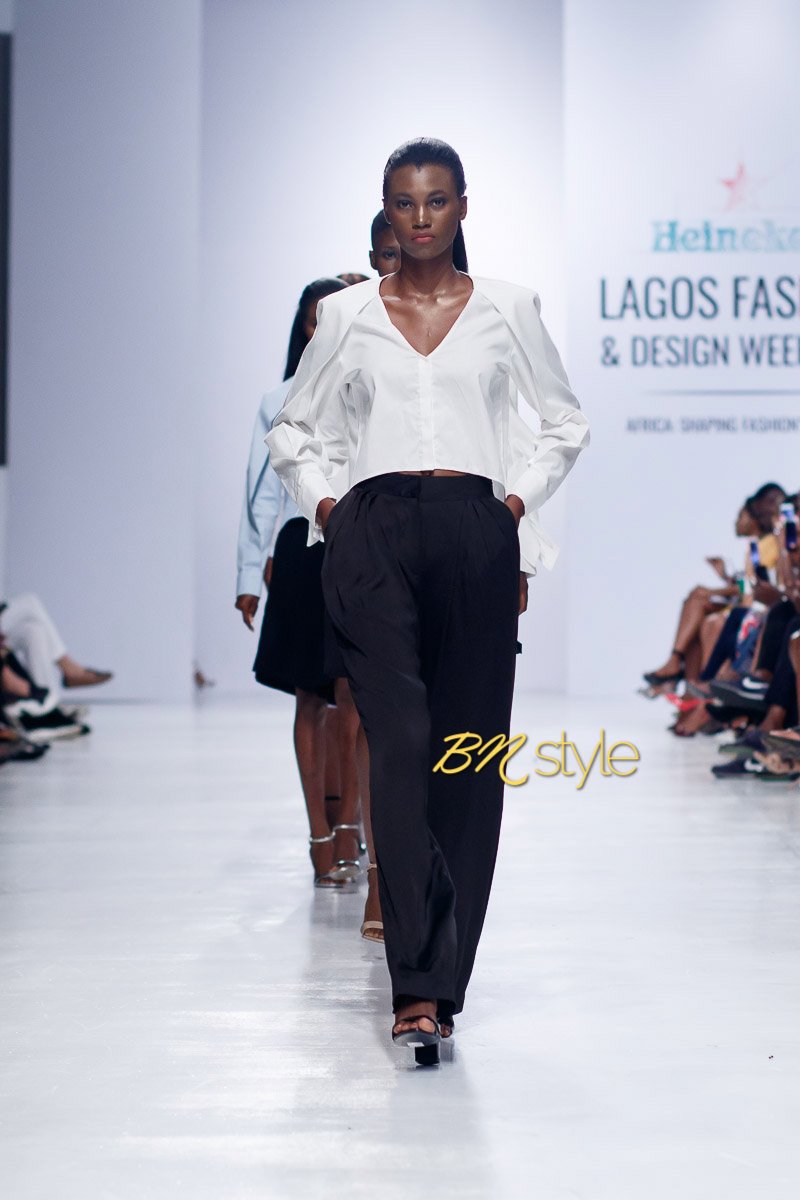 Her latest collection provided numerous high points. Shirts and trousers, the bedrock to so many
women’s wardrobes held centre stage, with slight enhancements such as a sleeve that is open but has
ties in the insert, packing a serious style punch. Romance was clearly on the mind with a heart motif
appearing on many pieces, sometimes in relief form and sometimes as embroidery. 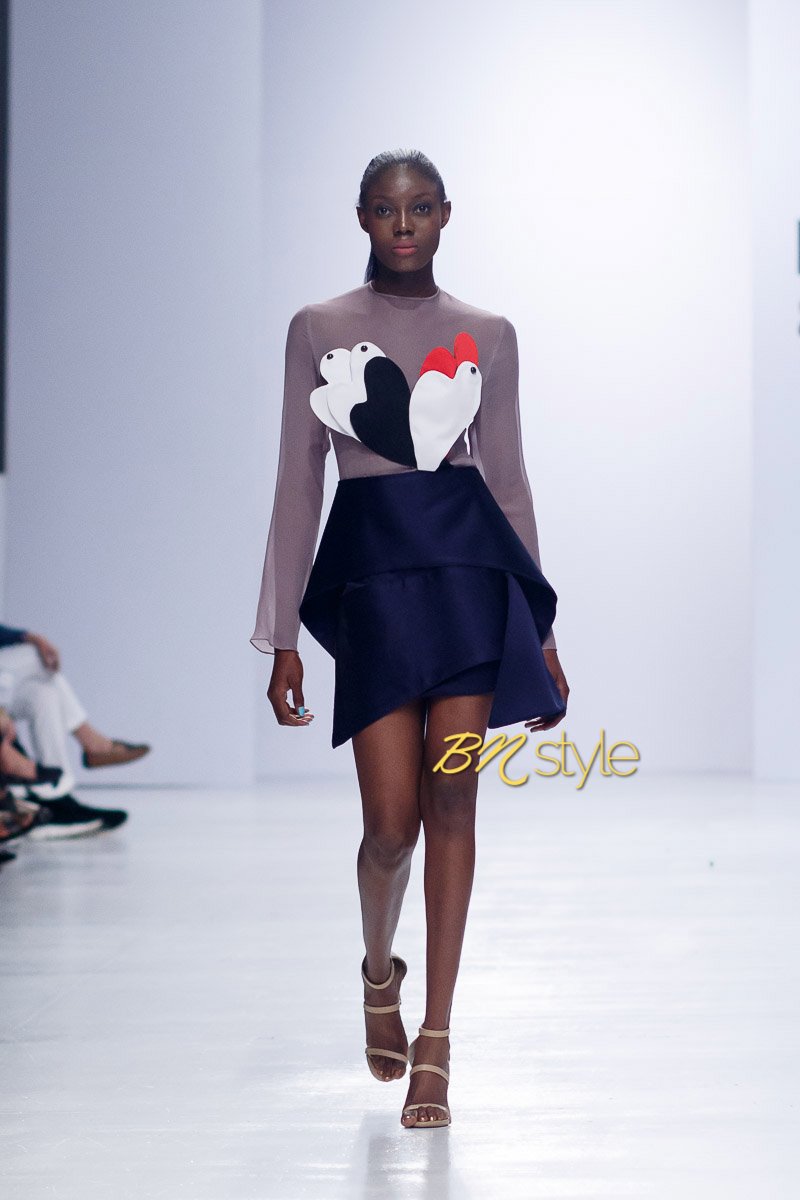 The discipline on her part and by proxy ours should we choose to partake in keeping things simple but
oh-so-sophisticated was also seen in her evening dress sequence, with cut taking precedence over fuss.
When additions were made such as with a showstopper cocktail dress that gave a hint of midriff it
evoked the notion of a woman only revealing herself when she is good and ready, and when we deserve
it. The guest behind me who kept saying ‘Correct!’ was entirely on the money 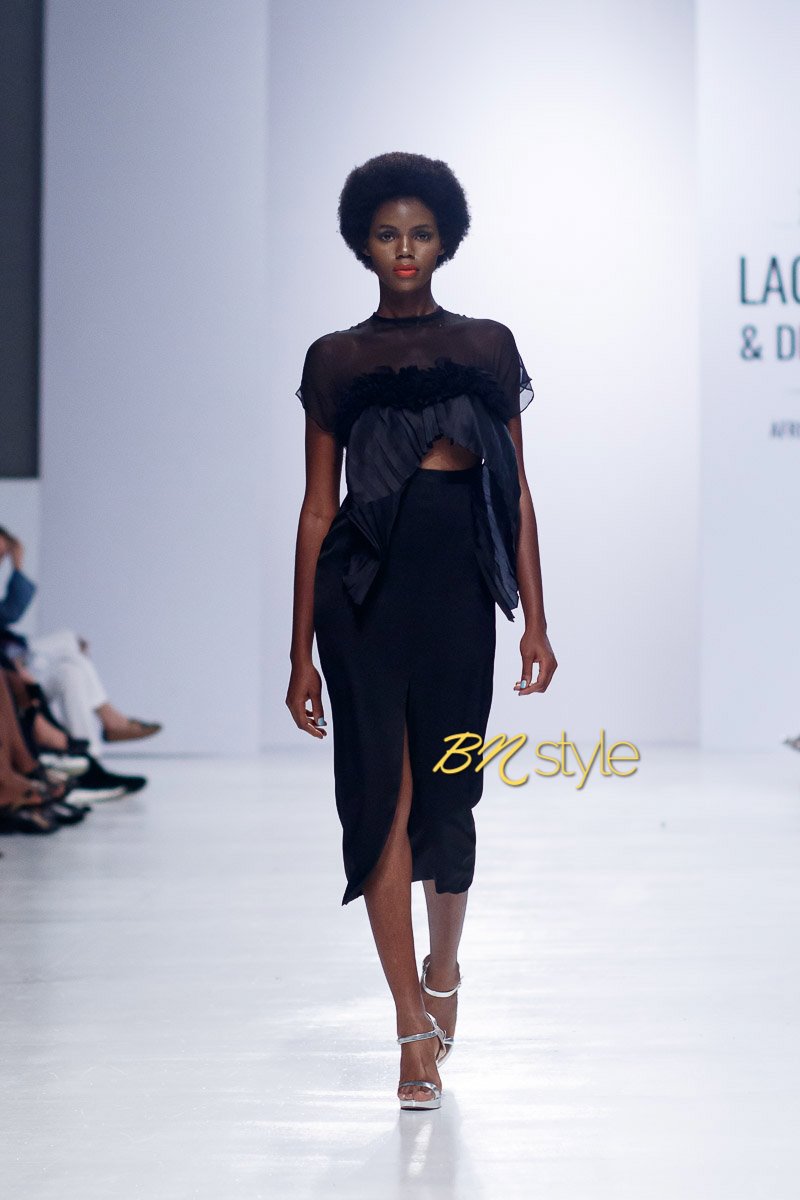 Abiola Olusola continued her steady march up the fashion mountain with another well put together collection. Toe-tapping musical accompaniment by Tolani Otedola added to the general “for cool girls only” vibe of the show itself. However, look at the clothes and one can see that Abiola is not one for forgetting the business in fashion. There were plenty of ‘wardrobe essentials’ that were refreshed via her use of colour and enhancement of shape. Directional styling was also pivotal: the show opener of an orange striped long shirt teamed with a teal wrap skirt gave two staples a wrap and a shirt dress repurposing and crocodile leather purse-belts freed up hands and shoulders from something as staid as a handbag. 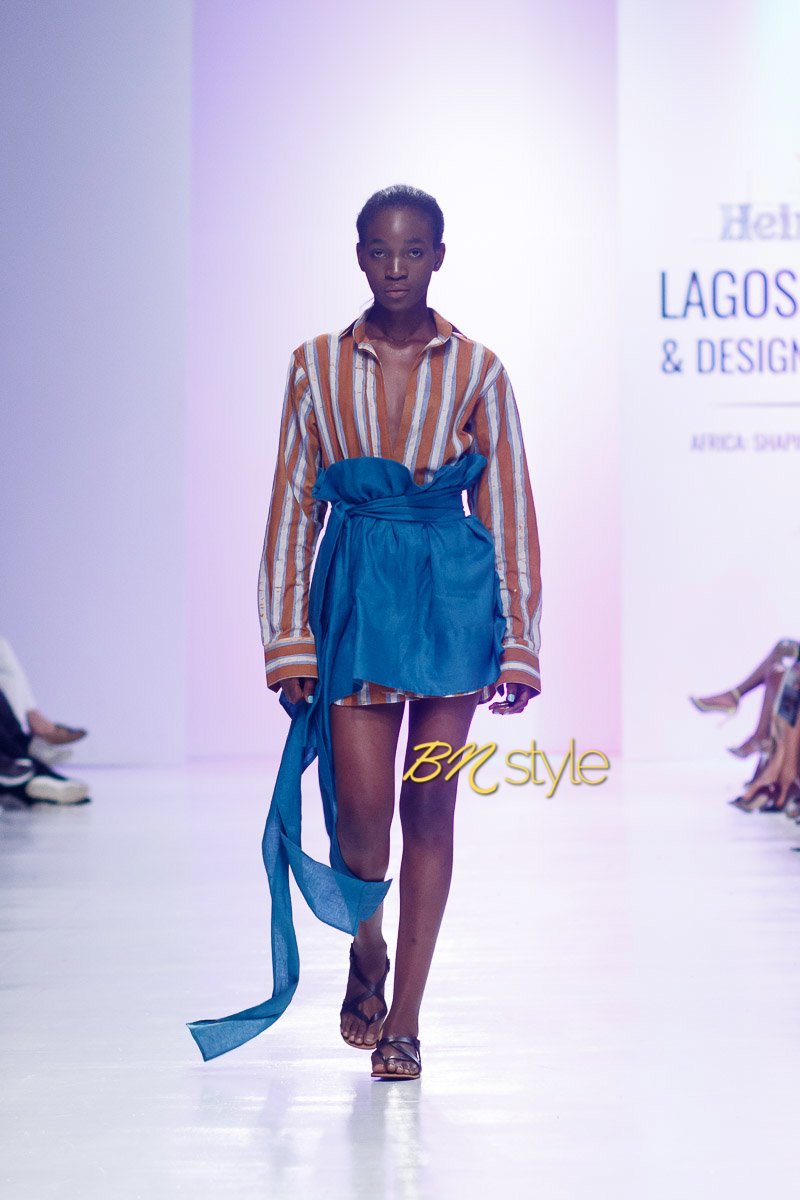 Dissecting, understanding and gleaning from Africa’s collective past has been something of a theme
through many of the collections shown this LFDW and IAMISIGO continued this thesis with a collection entitled MINO. The collection was inspired by the Dahomey Amazons from Benin Republic, an elite female army, selected by the king and denied the possibility of motherhood, who instead fought against the French colonial project and thus became mothers to the land. How creative director Bubu Ogisi translated this in the clothes was regal purple silver and gold streaked aso oke boleros and jackets and trousers as well as velvet leotards and tube dresses that compounded the message of empowerment and ease of movement. The male gaze was secondary, in a collection that celebrated a woman of
purpose and action.

Kenneth Ize also gave a well thought out collection which also contemporised the use of aso oke. He presented pieces both on men and women and whilst I appreciate the inclusivity, the womenswear fell far short of the assured approach seen in his men’s pieces. The contrasting modern aso’oke which incorporated brighter hues than would be sewn normally was just the jolt that one needed especially later on in the night. 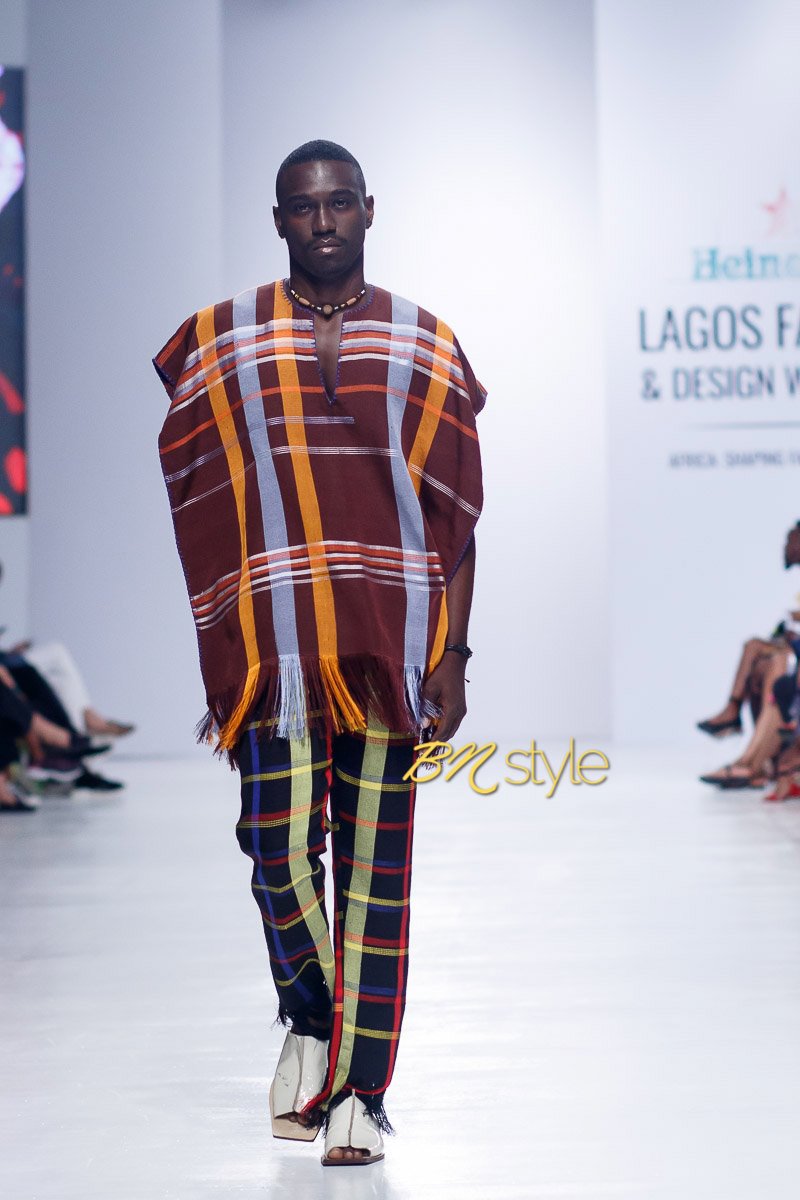 Another notable mention must go to Christie Brown’s collection which was a cornucopia of textures cuts and historical references. At times it felt like an assault as we were brought velvets, suiting, Edwardiana by way of silhouettes and Ankara peeking through hems to boot, but one could see a definite shift in direction in a good way. 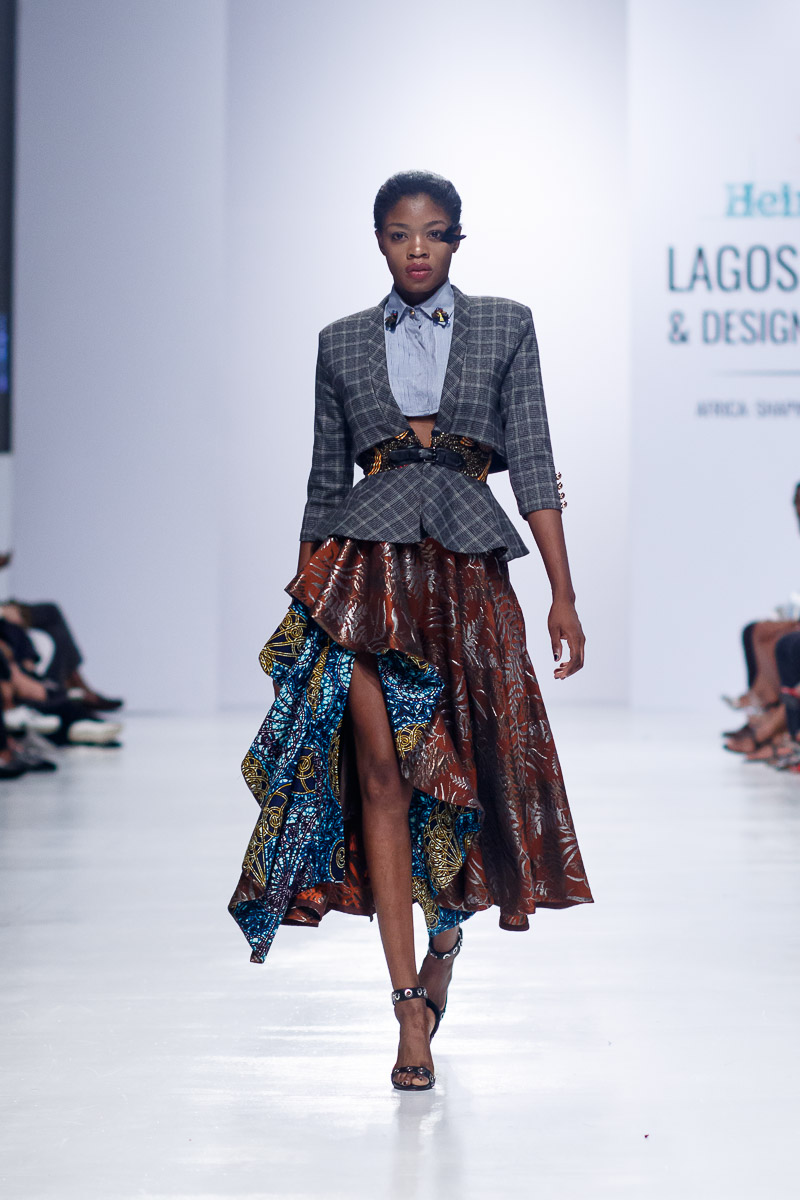 Knitwear isn’t normally associated with Africa and many, wrongly assume everywhere on the continent
universally hot, however Makxhosa by Laduma judging from their show last night and previous outings
is a luxury heritage brand in the making, so start collecting early pieces now. South African creative
director Laduma Ngxokolo has taken traditional Xhoza knitwear and made it desirable and luxurious the twin ingredients to create a brand that will become a byword for a discerning wardrobe. Just as Pringle in Scotland and Missoni in Italy, South Africa can celebrate that they have a designer who has created a world within a world, with long line cardigans and column dresses for women and sweaters and printed shorts for men. We even had socks on the runway – it’s only a matter of time before this translates to homewear too. 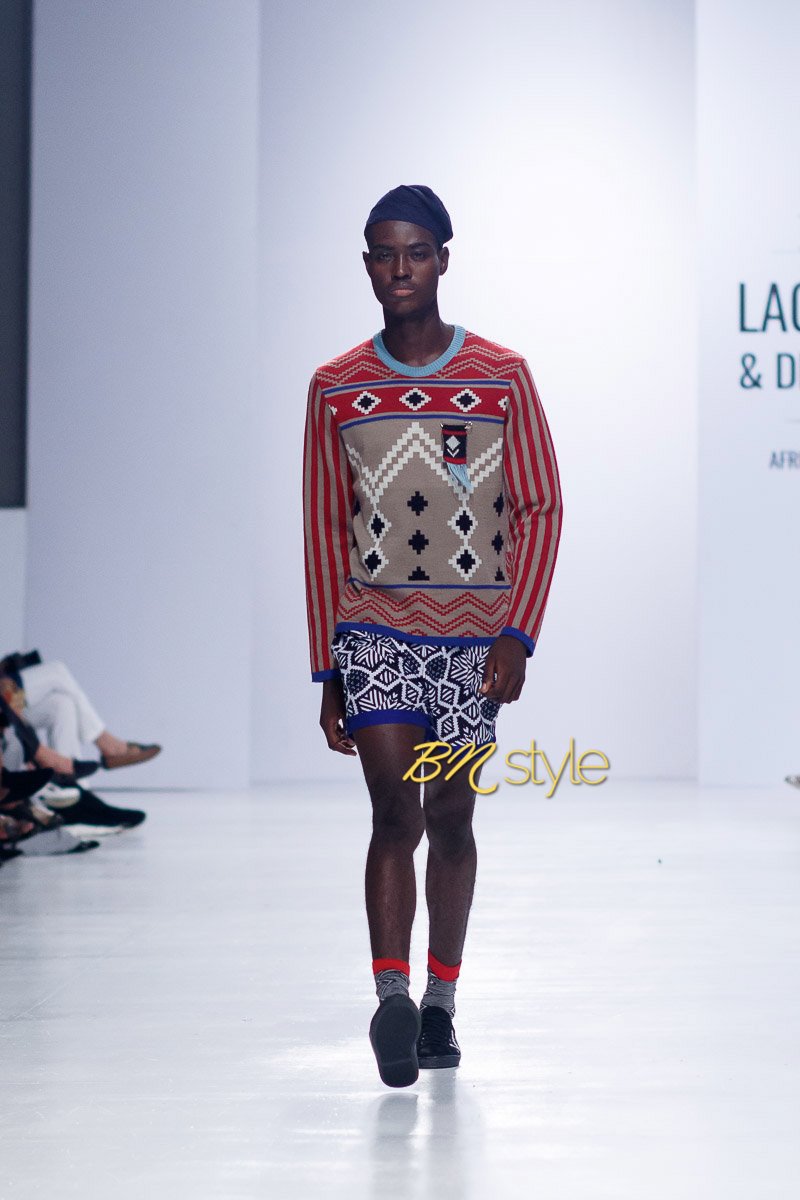 But onto arguably lady of the hour in terms of both closing LFDW and in the international fashion
industry’s space and that is Maki Oh. There are as many hailers as haters for Amaka Osakwe’s aesthetic. She has shown herself to be on the vanguard on numerous occasions hence the acclaim, the visibility and coveted fashion endorsements from the likes of Vogue and being worn by Michelle Obama.
Granted, the collection was seen in New York before, but it was a homecoming to the catwalk, as last
year she showed in a private presentation at Alara. The modern mash-up of delicate adire teamed with
denims, boxy masculine blazers and city jumpsuits and flared jeans that seemed innocent until one
noticed a zip that goes all the way between the model’s bottom cheeks showed that the Maki Oh
woman, like the designer herself, always walks to the beat to her own drum.

The chips may fall in your favour or not but with a tangerine shantung silk off the shoulder column with contrasting adire shoulder strap and flats rather than heels, you’ll be able to shrug things off with insouciance and élan. And isn’t that the epitome of lo-fi –luxe, a phrase that befits Maki’s design journey so far, shows why she is currently Africa’s hottest design export.

As LFDW closed there was much to be thrilled about in terms of the shape of the African fashion
industry. We can debate forever and a day about the modalities and challenges but where there is talent
there is hope.

4 Times Ola Adewale Wore a Blazer as a Dress And We Said YASSSS!