American Vogue’s April 2020 Cover Is A Celebration Of Diversity – We Love To See It!

Vogue US has released its April 2020 cover and in an unusual turn, the publication’s cover stars for this issue are models from around the world including Adut Akech, Ugbad Abdi, Adesuwa Aighewi, Kaia Gerber among others representing 25 international editions of Vogue. 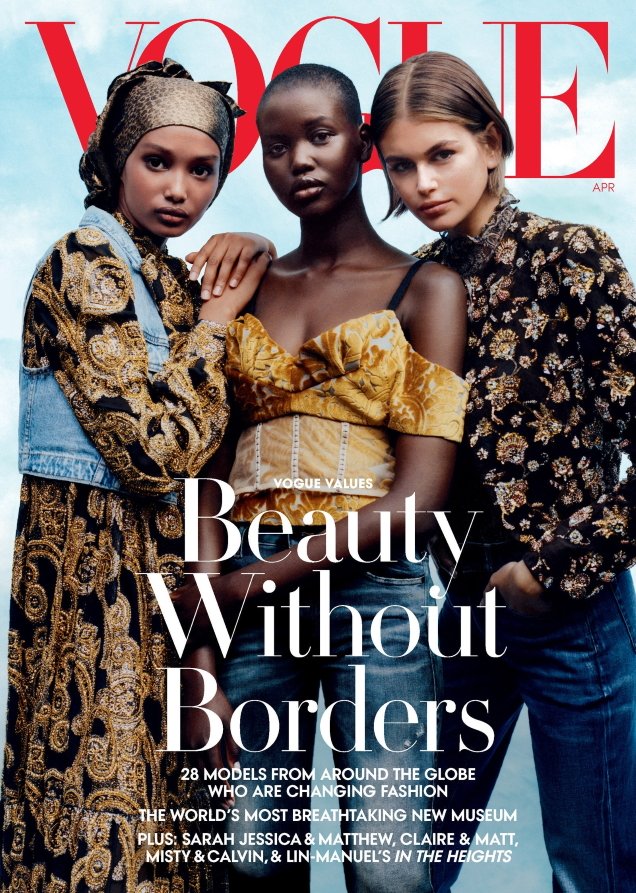 According to Vogue Fashion News Director Chioma Nnadi who wrote the cover story:

While the geographical sweep of runway stars was once drawn along narrow lines in which nationality, ethnicity, and race were often reduced to passing trends, there is a real sense today that fashion is, at long last, embracing an idea of beauty that encompasses the entire world. Phrases once used to crassly compartmentalize models—from the “Brazilian bombshell” to the “all-American beauty”—no longer fit, and the wave of identically cast Eastern European faces that dominated the runways in the early aughts has given way to a new generation of diverse international characters with multilayered identities.

As the fashion industry continues to address its shortcomings in the wake of #MeToo, and the conversation around the health and well-being of models continues to open up, the young women on these pages are raising their voices and asserting their individuality, their perspective, and their points of view. Among them, you’ll find Ugbad Abdi, the Somali-born teenager from Iowa who’s challenging stereotypes about Muslim women, and Adesuwa Aighewi, whose passion for ethical fashion is informed by her West African, East Asian, and Southeast Asian heritage.

Here’s All the Scoop on The African Odyssey, According to Vimbai Mutinhiri