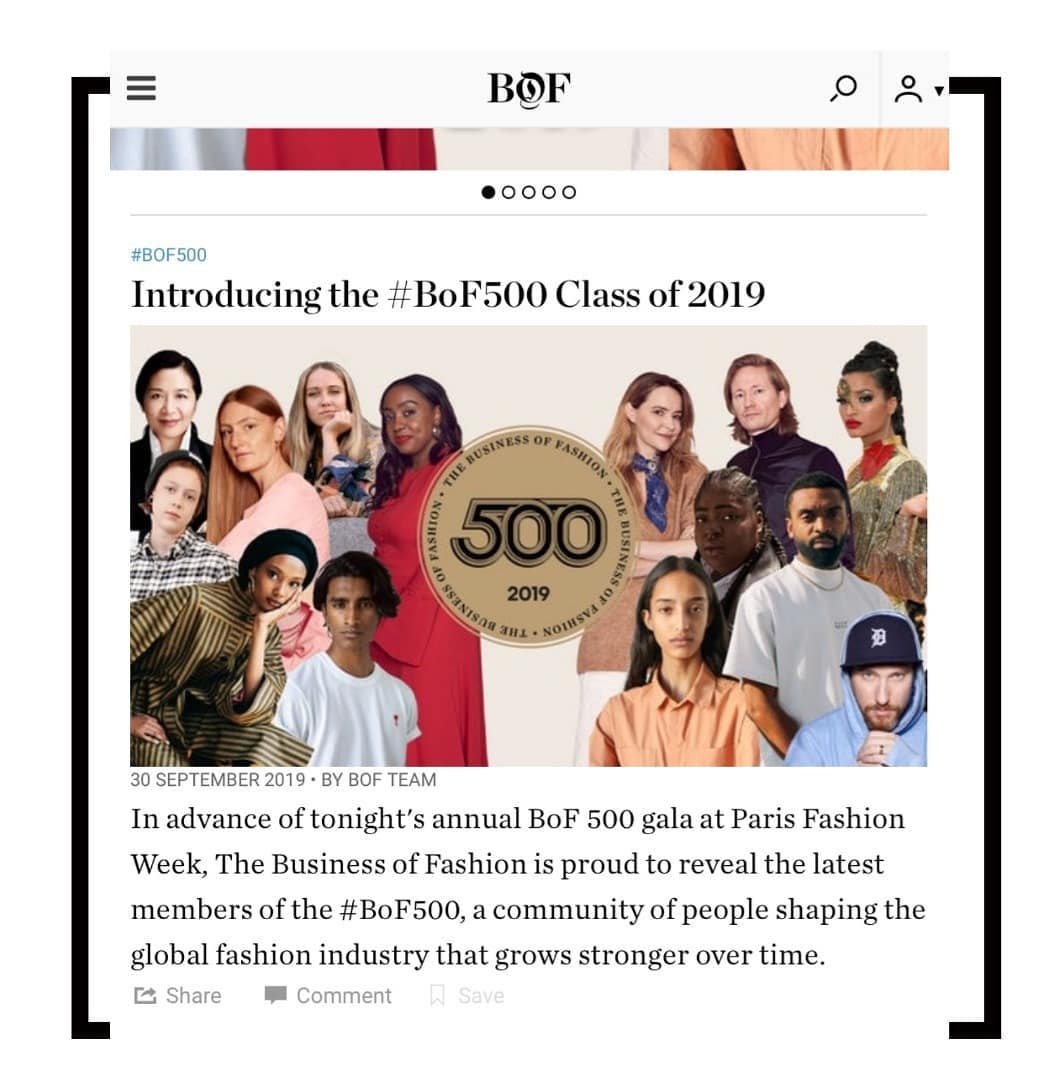 Fashion publication Business of Fashion released its annual #BoF500 list earlier this week. The list, according to the magazine celebrates the rising voices shaping the fashion industry.

The BoF 500 is the definitive professional index of the people shaping the $2.4 trillion fashion industry, hand-selected by the editors of The Business of Fashion, based on hundreds of nominations received from current BoF 500 members, extensive data analysis and research.

This year, the magazine announced that they will celebrate with the list, rising voices promoting and propagating the diversity movement in the fashion industry.

Too often, when we think about inclusion, it is only at the surface, without a deeper understanding of the issues at play and the history of what has come before. The business rationale and PR risk of getting this wrong is real. But there is still work to be done. Indeed, over the past year, every month it seems another brand put out a product, advertising campaign or statement that some customers found deeply offensive, leading some of them to burn their products, organize boycotts and create social media campaigns to call out the brands publicly.

Africans who made the list include rapper Chika known for her fierce cultural commentary and who very vocally called out Kanye West over his controversial Tweets earlier this year. Also on the list is editor in chief of Genevieve magazine Betty Irabor and model Adesuwa Aighewi.

With a breakthrough year behind her, scoring campaigns for the likes of Chanel and Marc Jacobs beauty, the model-turned-creative director is now seeing through her personal mission to promote the beauty of African culture.

Thank you @bof for recognising me as one of the 500 shaping the fashion industry 2019 along side other 8 African fashion Greats and my two favourites; Meghan Markle and Celine Dion. It's great news coming on my 36th wedding anniversary today. I dedicate this to THE G TEAM since 2003. #entrepreneurship #philanthropy #genevievemagazine #fashion #iconic

The media mogul, philanthropist and author founded Genevieve magazine, one of the leading lifestyle, fashion and beauty titles in her native Nigeria.

We are included in the @bof 500 for our brand @noahclothing It’s an honor to be a member of this global community of talented people doing incredible things within the fashion industry. ??. Sorry to miss tonight’s Gala in Paris. But humbled & so excited by the inclusion. Thank You @bof #Bof500 – can never forget that Team work literally makes our dream work and we wouldn’t be anywhere without our incredible team!!!

The former Supreme design director and his wife founded the label Noah to combine their talents for clothing and interior design while emphasizing the importance of sustainable products and practices.

i’m a covergirl ? | thank you for allowing me to grace the cover of @bof’s #BoF500 print edition. it’s time we shift the gaze of the fashion industry and create a more diverse, inclusive space. without pandering. ? i’m down to help.

Since her video calling out Kanye West’s politics went viral in 2018, the buzzed-about rapper artist has used her creative platform to reiterate the socio-cultural origins of hip-hop, and starred in an ad campaign for Calvin Klein.

Super honoured to join the @bof 500 list! It’s been such an incredible journey so far, and I’m excited for the future! Also happy to be repping ??! Happy Independence Day!!!!

The Lagos-born designer and LVMH Prize finalist is reinterpreting traditional West African fabrics and Nigerian craft through his eponymous label.

I am feeling *everything* right now… • Incredibly honoured and grateful to be named as one of Business of Fashion’s 500 People Shaping the Global Fashion Industry for 2019 — one of only five new media professionals added to the list, and the only South African for 2019. • Huge thanks to the @bof team, and to my family @condenastinternational @condenast and @gqsouthafrica #BoF500. • And a special nod to my fellow 'Nasties on the list, @lpeopleswagner and @willwelch! ?? • Link in bio for the full profile ?

The first black editor of a major menswear magazine in South Africa is pushing the boundaries of men’s style across the African continent and enriching the region’s increasingly diverse media landscape.

The South Sudanese newcomer model has quickly risen to star status on Models.com’s Top 50 list and embraced by the likes of Gucci, Givenchy and Loewe.

The breakout star joins the new generation of hijabi models furthering the diversity conversation on and off the runway.